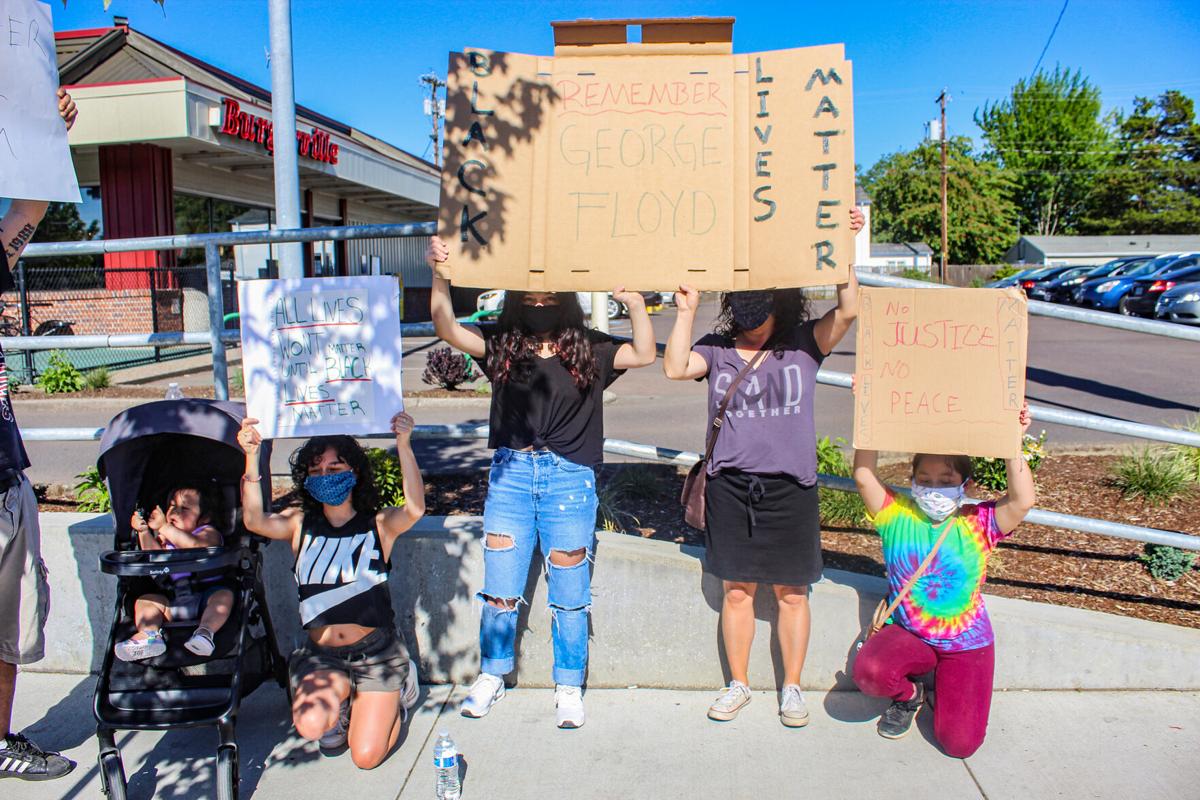 Rebecca Salinas-Oliveros, second from right, and her daughters Mara Oliveros, 17, in the Nike shirt, Bella, 14, and Elizabeth, 12, protest in Monmouth on June 3. 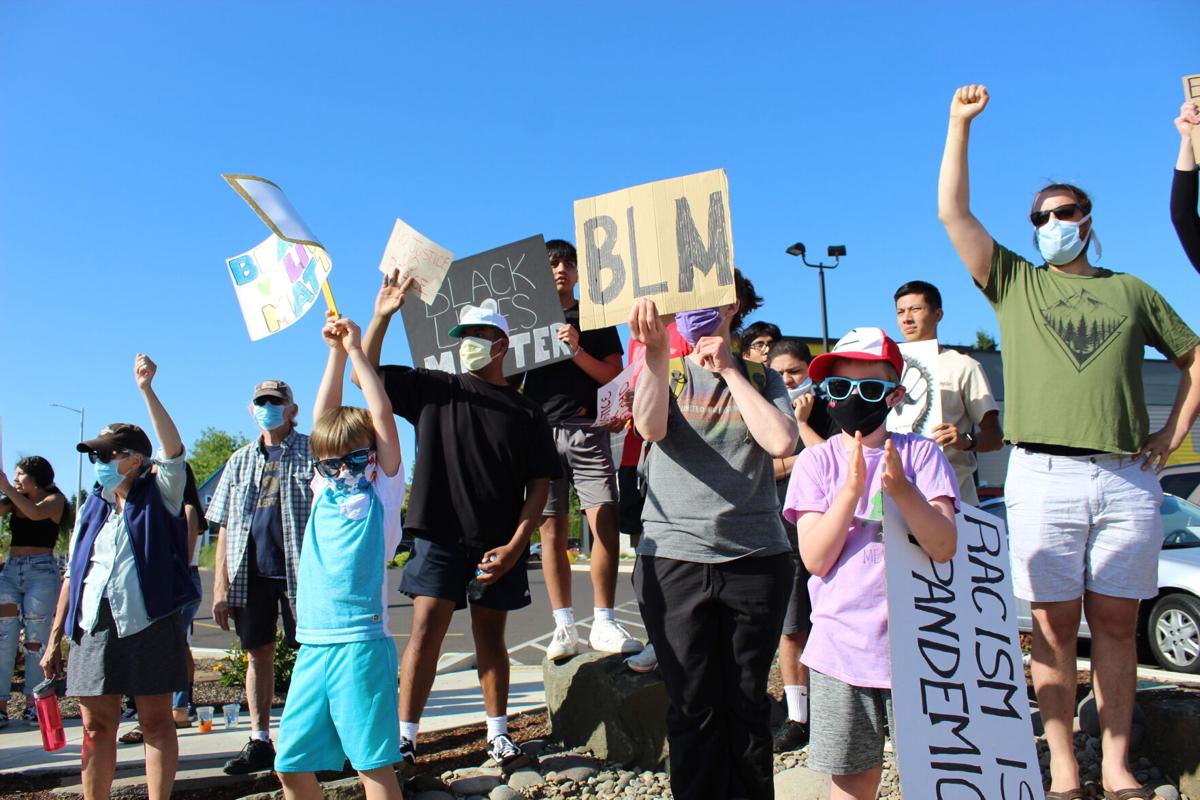 Protesters gather at the corner of Highway 99 and Main Street in Monmouth on June 3.

Rebecca Salinas-Oliveros, second from right, and her daughters Mara Oliveros, 17, in the Nike shirt, Bella, 14, and Elizabeth, 12, protest in Monmouth on June 3.

Protesters gather at the corner of Highway 99 and Main Street in Monmouth on June 3.

Rebecca Salinas-Oliveros thanked Monmouth Police Chief Darrell Tallan for his “forward thinking” in collecting racial demographic data for officers’ stops. Oregon House Bill 2355 (2017) requires by July 1, 2020, Oregon police departments with 24 or fewer officers to report race and ethnicity data of the drivers and pedestrians they stop to a state database.

Tallan said he’s been collecting that data since 2004, when he became chief.

“A group of concerned citizens were disappointed, however, to learn that this data is not being used to monitor stop patterns by police officers and Monmouth’s data is not easily found on Oregon’s website,” Salinas-Oliveros said. “Our Monmouth residents of color suffer when they are afraid they will be arbitrarily stopped in Monmouth, and when stopped unjustly, they can experience a deep sense of loss and lack of faith in the community.”

She said it is important that community members have evidence that people are treated equitably, and the police department’s demographic data can do “much to confirm that our local police are interacting equitably with all people in the community.”

She asked Tallan to review and identify “racial patterns” of police stops in the last year’s data.

“We ask that every month the chief review current data, and, if any racial stop patterns appear, he discusses the data with officers during their department meetings,” Salinas-Oliveros said.

Additionally, she asked that the chief look at data for individual officers “as a way to prevent potential problems with people of color.” She asked that the data be presented to the city council in three months to be compared to “data collected in a community survey that assesses the public’s trust of the police department.”

“We ask that a report with this combined information be presented within six months to the public during a city council meeting and made available on the city website via a direct link so the public has easy access to the information,” Salinas-Oliveros said.

Her daughters Mara Oliveros, 17, and Bella Oliveros, 14, took turns reading from their statement. The family has been participating in the protests on Highway 99 and Main Street since June.

“During the protests we have been yelled at, told to get an f—ing life, threatened to be run over and flipped off many times,” Bella said. “We notice the police officers that take the time to acknowledge us with a wave or even a fist in the air. We also notice the Polk County officials who do not. We notice who honks or gives some sign of acknowledgment, what peers from school drive by yelling against or in support and we have also noticed the lack of leaders present at this and other events.”

Mara said they are tired of people shouting “all lives matter” at them. “Don’t you know that Black lives are a part of all lives, yet we haven’t heard our leaders publicly and loudly say that Black Lives Matter,” Mara said. “Think of it this way, it’s like going to the doctor with a broken ankle and the doctor tells you not to worry about it. All bones matter.”

She said they want “all of our police officers, council members, teachers, school board members and anyone who works for our city be required to complete intensive anti-racist training several times a year every year as part of their employment contract.”

“We want more activities and resources available to students and our community including history about Oregon’s racist roots and active anti-racist learning,” Mara said. “We are asking for everyone to learn, grow and act like decent human beings,” she said.

Bella said they will continue to stand for boys and girls of all races. “We stand for our little sister who has darker skin than we do and has already experienced racial hate,” Bella said.

She named other groups including people who are economically insecure, the “LGBTQ+ community and anybody who has struggled to fit into our society.”

Councilor Roxanne Beltz said she has spent much of the last six weeks listening to community members, even when it was uncomfortable. It has caused her to question her beliefs about race and racism, she said.

“I used to be one of those people that when I heard ‘Black Lives Matter,’ I thought, ‘Well, all Lives matter.’ Until I learned how offensive that really is,” Beltz said. “Of course, all lives matter, but people seem to forget sometimes that Black and brown lives are part of that ‘all.’ If all lives truly mattered to everyone, then there would be no need to say Black lives matter.”

She said it was time to speak out.

“As a community leader, I believe I have a responsibility to acknowledge and show my public support for the Black Lives Matter movement,” Beltz said. “That includes speaking out publicly, like this, even though I’m afraid of saying the wrong thing in my attempt to do the right thing.”

She said she knows that everyone can’t participate in the same way, but she encouraged people to think about what they can do.

“Get up to speed on publications that cover the Black Lives Matter and other racial justice movements,” she said, offering Colorlines, The Root, and Black voices from the Huffington Post as websites to read. “We’re all busy,” she said. “This all takes time. Taking time to do this is actually recognizing how I spend my time is part of the privilege that I have.”

Councilor Chris Lopez said “there are a lot of wonderful intentions but I would like to remind all of us that, those of us that sit on the dais, sit in places of power, here in our city.”

He said he doesn’t believe it is enough to urge people to vote or read or be active in advocacy.

“We are in those places of power that they have the option to vote in or out,” Lopez said. “We need to take responsibility and be proactive in these matters. I do believe that our city is in a better space than many out there, but I also firmly believe we have a huge amount of opportunity for improvement as well.”

He said he has experienced discrimination in other small communities, but not knowingly in Monmouth.

“These things are difficult to see until you’re on the brunt of it,” Lopez said. “I would encourage all of us to continue discussing this.” Lopez requested a work session “specifically addressing the questions and requests” brought up during citizen comments.

Mayor Cec Koontz said she would be working Chad Olsen, interim city manager and Tallan to determine “how we want to move forward.”

“The meeting on July 21 won’t include a point-by-point, partly because I want to wait until after the second roundtable session on the next evening to gather all ideas and concerns,” Koontz said. “It’s kind of hard to respond to one set of suggested (or requested) actions while formally asking others for input.”