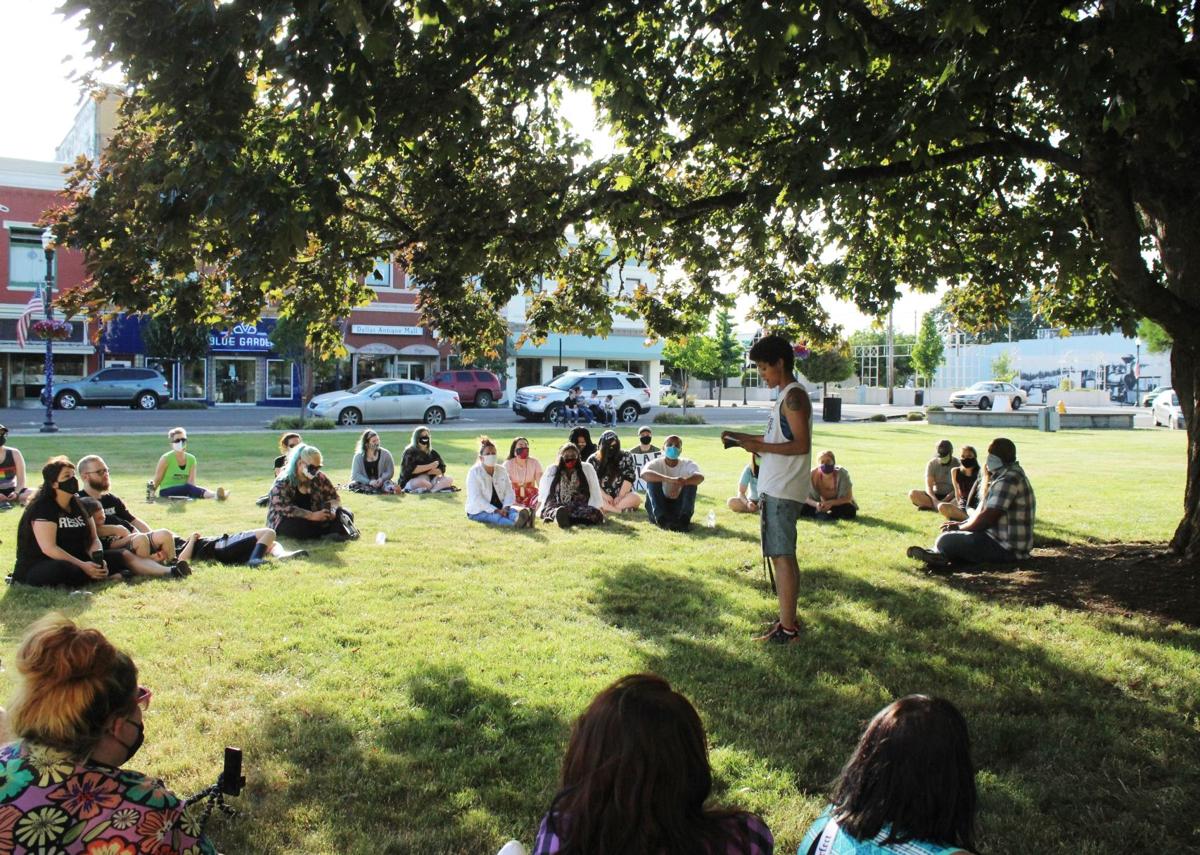 Jasmine Hayter, standing, talks about her experiences with racism in Dallas at a protest in Dallas on Friday evening. 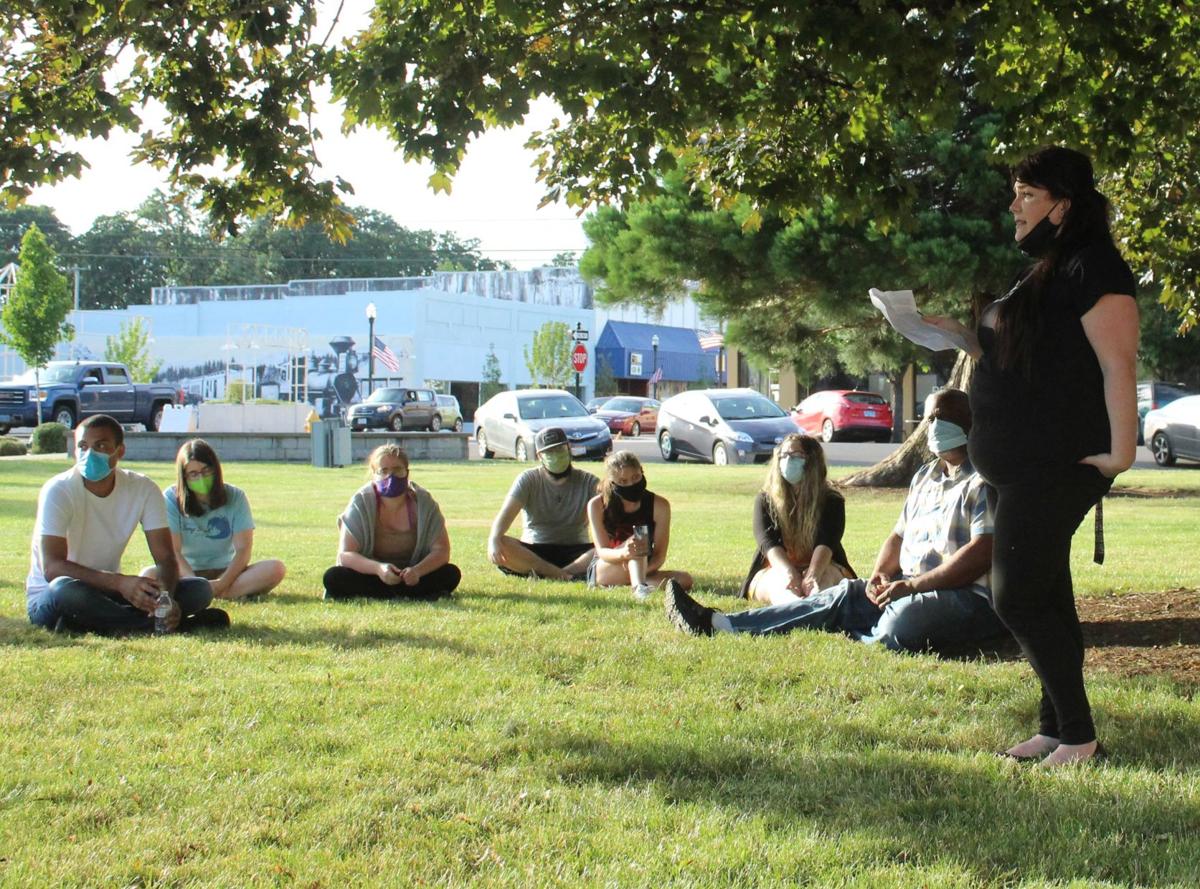 Rebecca Hunt, right, calls for people to vote as one of the easiest way to make change.

Jasmine Hayter, standing, talks about her experiences with racism in Dallas at a protest in Dallas on Friday evening.

Rebecca Hunt, right, calls for people to vote as one of the easiest way to make change.

DALLAS – Change can happen one vote at a time, one law at a time and one town at a time.

That was the message from speakers at a small protest in Dallas on Friday evening. The group gathered on the lawn in front of the Polk County Courthouse and opened the protest by having those who could lay face down on the ground for nearly 9 minutes, the length of time that an Minneapolis police officer pushed his knee into the neck of George Floyd while he was in police custody.

Following the demonstration, speakers Tyrone Jones, Jasmine Hayter and Robert Hayter talked about their experiences with racism in Oregon and Dallas.

Jones recalled the time he was on his way to work in Salem when he was stopped by an officer who pulled a gun on him, arrested him and took him to a Circle K on suspicion that he might have robbed the store. He said the only similarity he had to the actual robber was they both are Black.

The store clerk confirmed this for him.

Jones said his family moved to Dallas six years ago, and they owned a car lot. His son, Jayden, drove the cars in the business’ inventory, and was repeatedly pulled over. Jones talked to the police chief, who told him to put a sticker on the cars so officers would know not to pull them over.

Jones refused, saying he shouldn’t have to put a sticker on cars to make sure his son is able to drive without being stopped by police.

Officers pulled his son over five or six more times that week, he said.

“The very last time, the police said they have the situation figured out and they won’t pull him over again,” Jones said. “About an hour later they  call me up. They just pulled him over again. I came flying into town. I get to the police station and they explain to me that the reason they pulled Jayden over so much was because of the type of car he drives. They thought it might be stolen.”

Jones said he asked, “What kind of a car would it take to keep my son safe?”

Jasmine Hayter has lived in Dallas for most of her life and has had store employees watch her while shopping, police officers follow the car she is in and people yell racial slurs at her.

She said it’s taken a year for her to be added to her wife’s lease because “according to my landlord, I’m a dirty little Black girl.”

She said there are businesses in Dallas where the employees refuse to take cash from her hands, but will take it from her wife.

“Now I’m raising children. My son notices the glares in the stores. He notices that the cops never used to follow his mom, but now that I’m a passenger, we get followed for blocks,” Hayter said. “After the death of George Floyd, my wife and I had to explain to our kids that not all cops are bad. We had to reassure our daughter that the Confederate flags on cars in our town did not mean they were coming for me and that her Hispanic friends would be OK.”

She said racism is still very real in Dallas.

Jones questioned those who say Dallas doesn’t have systemic racism. He said the police city has details recorded about arrests and traffic stops, and can prove it one way or the other.

“They have the statistics of the minorities in Dallas,” Jones said. “They know if they are pulling over more minorities.”

Furthermore, he asked what the city was doing to help minorities who live in town.

“What are they doing to change the poverty level of single mothers in town, or interracial couples or LGBT community couples that are coming to town?” Jones said. “What are we doing to protect those people from the same kind of stuff I had to encounter?”

Robert Hayter, Jasmine’s father, said while he felt he had friends and co-workers that gave him “insulation” from the impact of racism, he witnessed and lived through it while in Dallas.  He said the town has a long-standing reputation.

“When I told my mom I was moving to Dallas, if I had been in front of her I think she would have slapped me,” Robert Hayter said.

She called Dallas the closest thing to a hotbed for the Ku Klux Klan in Oregon.

He asked those gathered Friday to fight against the racism that remains in Dallas.

“Please push. Push for each other. Push for me. Push for anyone that has (experienced) racism, bigotry, prejudice by who they are or how they look,” he said. “If it’s hate, you have to push back.”

Jasmine Hayter said the protest held on June 10  in Dallas and other conversations about racism occurring in the community are a start.

“But let’s take it a step forward and let’s host heritage festivals, let’s host a pride event in this town,” she said. “Let’s welcome outsiders with open hearts and minds. We should increase resources for our youth, beyond sports, for they are our future. Let’s make Dallas into a warm, welcoming and loving town. We can do this, but only if we work together as a group.”

Dallas resident Rebecca Hunt, one of the organizers of the Dallas’ June 10 protest said those wanting to help eradicate systemic racism have options: Continue to learn; continue to listen; and continue to advocate for those who don’t have a voice.

Hunt announced her next step would be to run for mayor in November.

Frankie Brune, a Dallas resident who organized Friday’s event, said it no longer acceptable to just be quietly anti-racist.

“This has to stop, and we are not going to be quiet until it does,” she said.