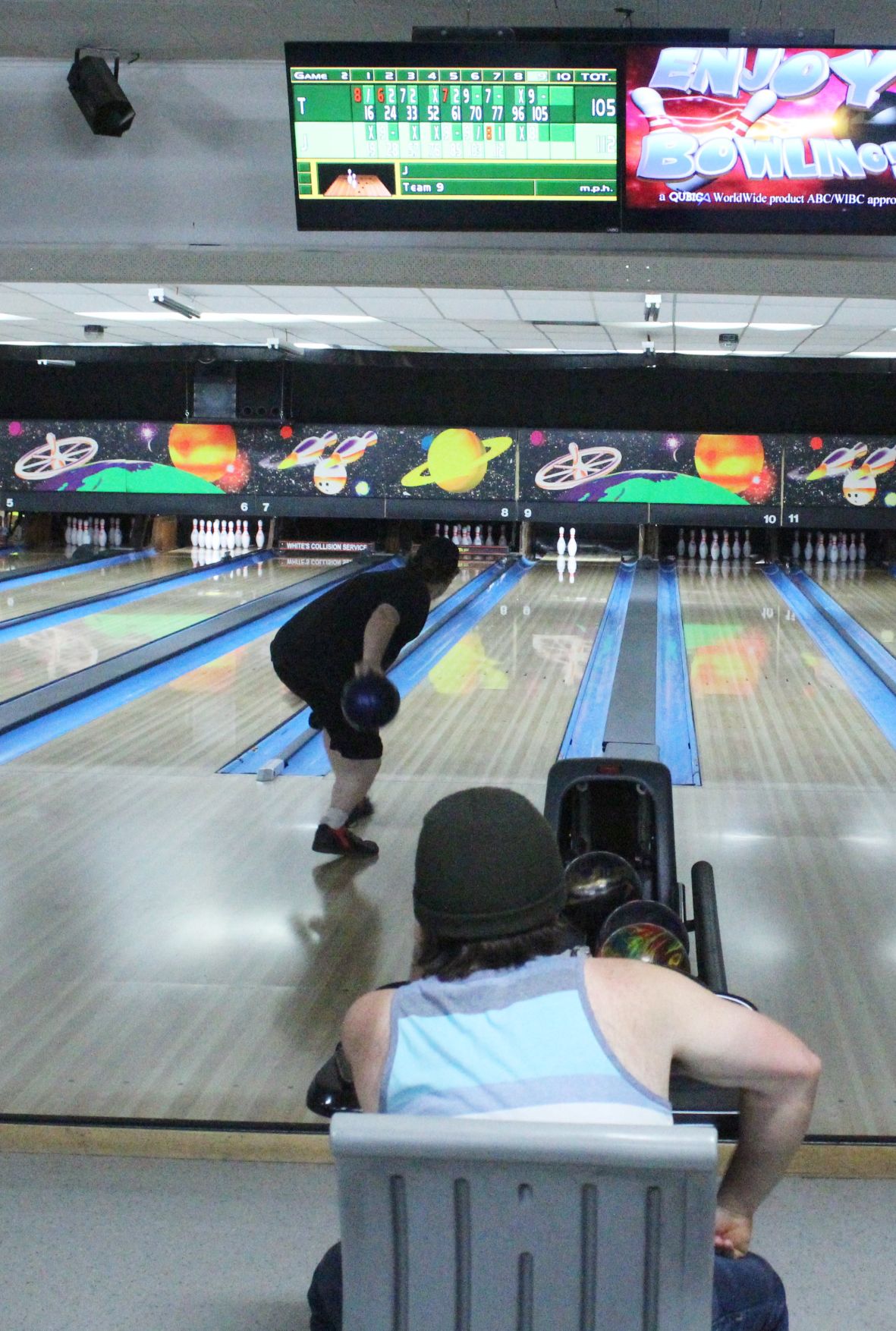 Customers are asked to check in and use hand santizer before bowling, left. Bowlers returned to Starlite Lanes in Dallas on June 19. 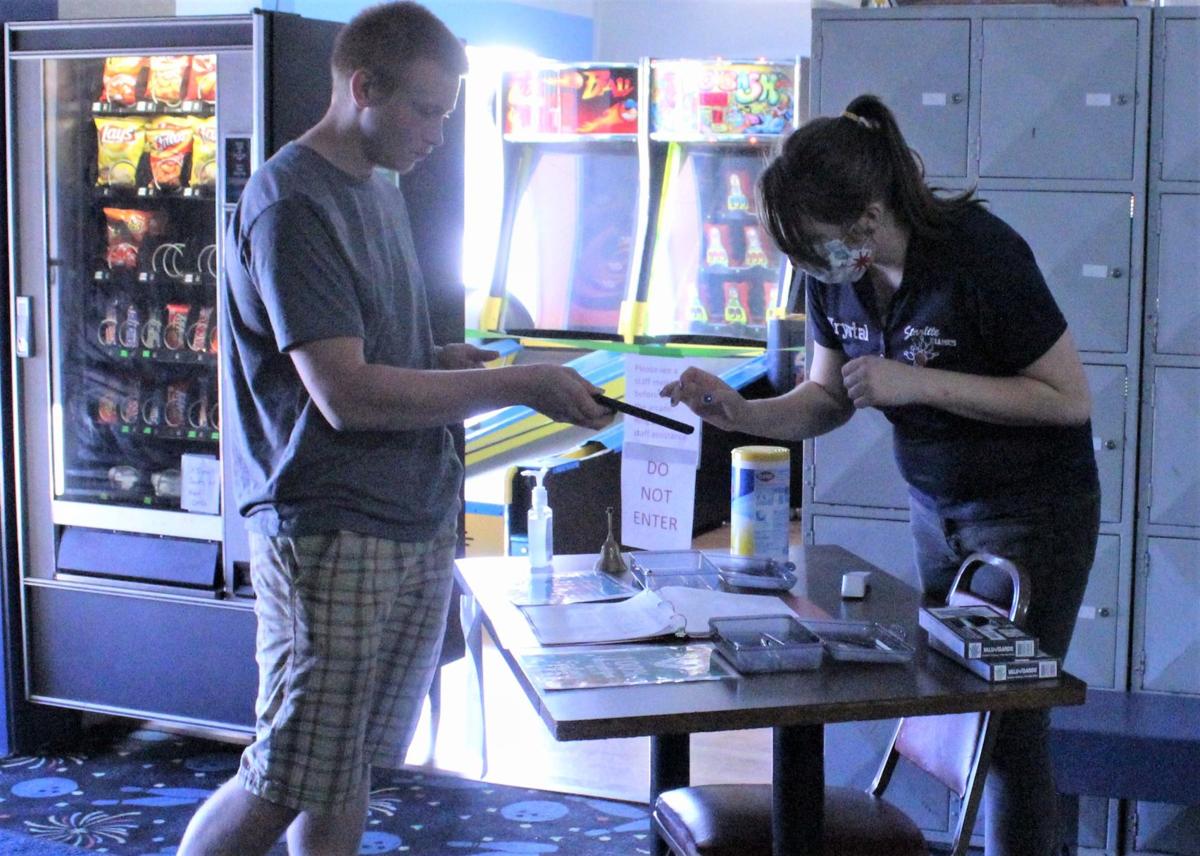 Customers are asked to check in and use hand santizer before bowling, left. Bowlers returned to Starlite Lanes in Dallas on June 19.

DALLAS ­— Darrell Cooper, owner of Starlite Lanes in Dallas, and his new general manager, Colleen Sargent-Diarmit, made good use of the forced closure due to COVID-19.

Sargent-Diarmit has just started on the job when the pandemic began in Oregon, and the bowling center had to abruptly change plans.

“I was here six or seven weeks, then the shutdown happened and I worked through that,” Sargent-Diarmit said. “I pretty much volunteered for a couple hundred hours to do takeout for them and keep them with some revenue coming in.”

The kitchen was doing takeout meals, but the Coopers decided to undergo long-needed work on the center. The Coopers have owned the center three years this July, but had been in a position to not only wait out the shut down, but have the resources for a major remodel.

The remodel ended shortly before bowling centers, movie theaters and pools got the go-ahead to reopen. Sargent-Diarmit said the owners had plenty of volunteer help from family, friends and league bowlers.

“That was a blessing,” she said. “It was 30, 40 years in the making, so it needed it for sure. We went as far as having the entire air duct system cleaned and sanitized. It was probably never done in the history of the building.”

The center has a new kitchen, floors, carpet, bar, gutters and bumpers and backend equipment to keep the lanes running smoothly, some of which was purchased from a bowling alley in Wilsonville that closed.

“We would have normally had to pay so much more money for that, so that was another big, old blessing, the ability for them to do that,” Sargent-Diarmit said.

She said everyone was ready for the reopening on June 19. Due to an increase in cases statewide, Gov. Kate Brown delayed Phase 2 for Polk County one week.

“I had pretty much everything ready to go,” Sargent-Diarmit said. “We were fired up and ready to go that first week when the pause happened. Some of the construction clean up, that was sort of a scramble, but that was really it. We planned it pretty well. I was pretty organized for the most part. A lot, a lot of hours put in by the owners.”

She added that Starlite had the loyal support of its regular bowlers throughout the shutdown.

“Bowlers are a different breed of people. They are loyal as the day is long, and they love their sport,” Sargent-Diarmit said. “The people who love it really love it and would back a bowling alley in a heartbeat. We’ve been really fortunate in that regard. We even had one patron donate money to the staff. She showed up with a check one day to split up among the staff members.”

Though the Coopers had the financial stability to complete the remodel and survive the shutdown, Darrell Cooper said it’s a relief to see the lanes in use again.

Sargent-Diarmit said its been a challenge to adjust to the new normal, but the center is taking extra steps to keep staff and customers safe.

“The biggest obstacle has been working when we are really, really busy in a mask. I have a friend who’s 3-D printed some face shields for the staff and a whole bunch of our league bowlers as an option to not wear a mask and try to bowl,” Sarget-Diamit said.

Staff will have customers sign in with contact information when they come in for contact tracing, if necessary. They will have their temperature checked and will be asked to use hand sanitizer before touching anything.

People who need to use a bowling ball are given gloves to use to try out balls. They don’t have to use them to bowl, but to find the ball they want to use.

“When they are done bowling, their rental shoes and balls stay down on the lane, and the staff goes down and sanitizes the entire lane,” Sargent-Diarmit said. “All the seats, the console, anything that could possibly be touched.”

Bathrooms are sanitized regularly, and tables will be scrubbed after every customer.

“We even got a new dishwasher that heats things to 300+ degrees so that all of our dishes are sanitized,” Sargent-Diarmit said.

Bowlers will use every other lane to stay within social distancing guidelines.

“I think the perception is sometimes about bowling centers is that everyone is on top of each other. We have more space than anything else,” Sargent-Diarmit said. “I feel safer here than going out to dinner with my husband. We have the square footage to do that.”

Since opening on June 19, she said some bowlers have made daily appearances.

“The one thing I’ve seen with the customers is it is a stress reliever, they say ‘Oh my gosh. I’m so glad to not be at home anymore.’”