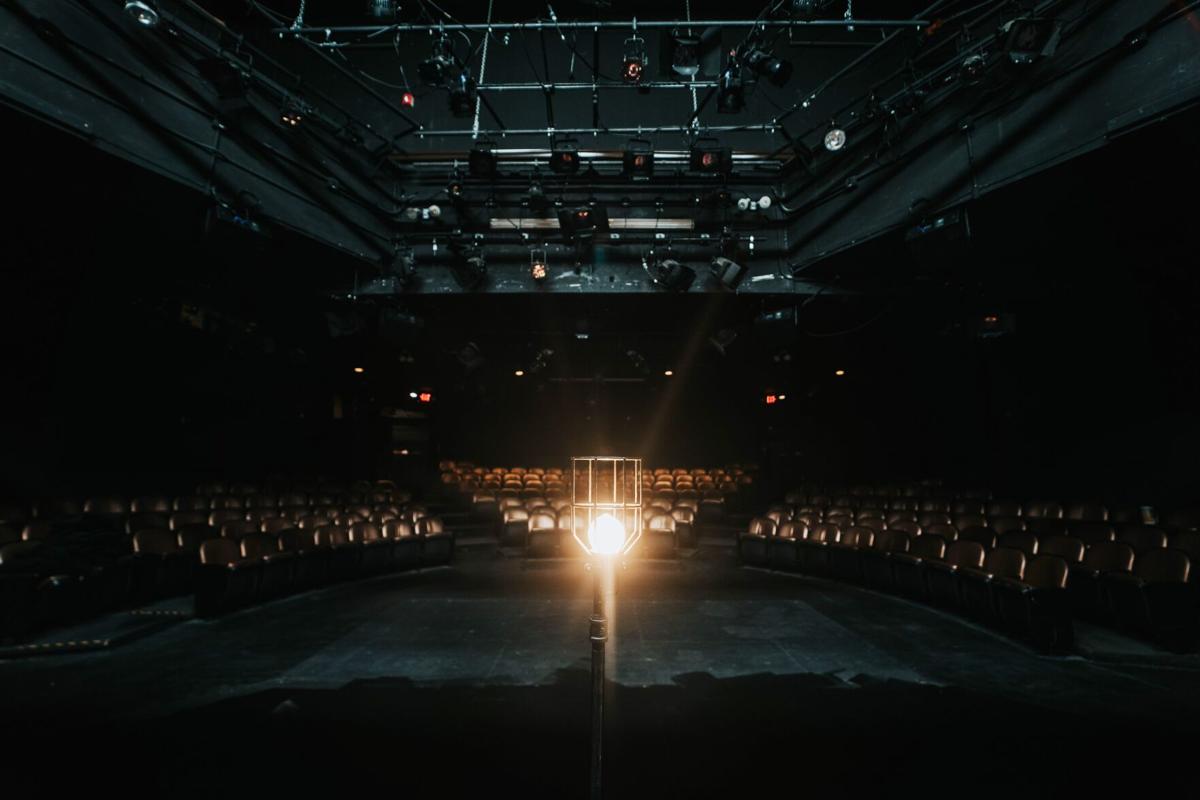 Pentacle Theater in West Salem had to stop productions due to the pandemic. 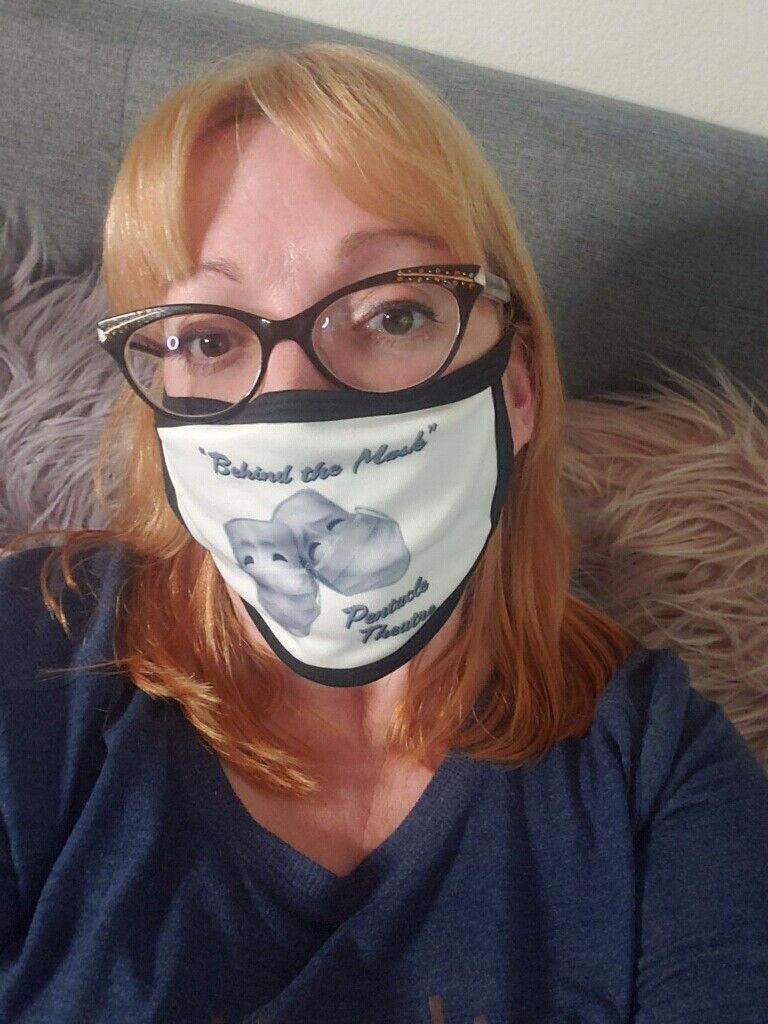 Right, Geri Greeno models face masks the theater is selling as a fundraiser.

Pentacle Theater in West Salem had to stop productions due to the pandemic.

Right, Geri Greeno models face masks the theater is selling as a fundraiser.

WEST SALEM — Ed Schoaps’ wife Susan was nine months pregnant when he directed her and her fellow Calamity Carolers of Doom in a Christmas production at the Pentacle Theatre.

The troupe performed the first act in Victorian costumes. “You couldn’t tell she was pregnant,” Schoaps remembered. “She was wearing a big full dress with a petticoat. In the second act, however, it was very apparent she was very pregnant.”

For Schoaps, the community theater off Highway 22 in Polk County is about more than plays and musicals to provide the mid-Willamette Valley with an evening’s revels.

“It’s a family affair,” he said. “It affects our whole family. My wife and I met at the theater. We were married at the theater. Our first child was almost born here. Our youngest son wants to pursue theater as a profession. We’re a theater family. It’s what we do.”

All that is gone for the foreseeable future.

The Pentacle Theatre closed down — indefinitely — after Schoaps starred as Hercule Poirot in “Murder on the Orient Express” in January and February. It will reopen after the coronavirus pandemic passes. However, Executive Director Lisa Joyce said the theater may never be the same again.

The live theater business has always been about bums on seats. And there were fewer bums filling fewer seats even before the pandemic struck. Joyce said many theater-goers are older people who might still be reluctant to attend indoor activities even after the pandemic.

After “Murder on the Orient Express,” the next Pentacle production was going to be the musical “Company.” Joyce said musicals can be extremely difficult to produce. They often require complicated sets and wardrobes, Plus, they’re expensive,

“Shrek: The Musical” was scheduled to run at the Pentacle Nov. 27 to Dec. 19. Theater officials paid $16,000 in royalties just to stage the production. Future productions may focus on simpler sets with fewer costumes.

“We are concerned as we look forward about the number of people willing to sit in a theater,” Joyce said. “Whatever we do, it will probably be of a lower risk. We just don’t know what the ticket sales will be like.”

Schoaps, who has been an actor and director at the Pentacle since 1976, said living without the theater is grim. “It alternates between difficult and even more difficult,” he said. “It’s kind of like having a death in the family. You’re at a loss. You don’t know what to do. You don’t have that connection anymore.”

Some community theaters, such as the Gallery Theater in McMinnville, have tried to work around the pandemic. Gallery actors staged a series of productions in the small courtyard outside the Ford Street theater this summer. Recent productions included “Tea for Three” (about first ladies Lady Bird Johnson, Pat Nixon and Betty Ford) Sept. 3, followed by a cabaret-style production Sept. 10.

Joyce applauded the McMinnville theater’s efforts, but said they couldn’t be replicated by Pentacle. “The way they did things was very a safe way of doing things, but it’s not theater the way Pentacle or even Gallery is used to doing them,” she said. “We don’t have the possibility of a space like that, and the services they provided were primarily for their creatives, to give them an outlet.”

The Pentacle faces particular obstacles during the pandemic, she added. The theater features a “thrust stage” which juts out into the middle of the audience. Plus, the Pentacle is also a relatively small venue —  with only about 200 seats. To maintain proper social distancing, only 66 people could be allowed to watch a production at any one time.

Schoaps sees other obstacles. “Social distancing applies to the cast and crew as well,” he said. “How do you hold rehearsals? What kind of shows can you realistically do?”

The answer, Joyce said, is inescapable.

She and the theater’s board had no choice but to shutter the theater and scuttle the remaining shows on the 2020 schedule. After “Company,” the theater was scheduled to stage “She Kills Monsters,” “The Fantasticks” and “Ripcord” before completing the season with “Shrek.”

None of those shows are planned for 2021. In fact, Joyce said, no shows are planned for next year until the coronavirus takes its final bow. “We’ve put on hold the season selection for 2021,” she said. “When we do choose shows, it will be in our new context, so we’ll have to choose carefully.”

Joyce said she can’t even guarantee there will be a 2021 season. “We’re not counting on that,” she said.

The pandemic caught Pentacle, like so many other businesses, completely off guard, she added. “We had an imperfect concept of the virus,” she said. “We actually thought we could be back in 2020.”

Without ticket sales, Pentacle staff and board members were left scrambling to find ways to pay the bills and keep the theater alive in its dormancy. The theater’s website sells souvenir face masks for $12 that feature the classic masks for comedy and drama themselves wearing face masks. Masks within masks within masks.

“That’s a very fun thing, but it’s not a very big aspect of our efforts to raise funds,” Joyce said. “We’re fortunate that we received dedicated funding from the Legislature’s emergency board that was passed through from the federal government. We received $26,000 from that.”

Theater officials also received a $3,000 grant from the City of Salem to pay the lease for a month on their downtown Salem office on Northeast Liberty Street. However, Joyce said the stop-gap funds will not be enough. The office is shutting down.

Another $20,000 came from a pandemic grant from the Oregon Community Foundation for theater and the arts. Pentacle board members are also raising money from patrons and members. “We were really lucky with that,” Joyce said.

In response to the pandemic, she said, the number of regular monthly donors increased from three to 63. “That’s really nice,” she said. “It generated a consistent source of revenue.”

Board President Chris Fletcher also plans to seek more community donations early next month. “It’s a lot of relying on donors, which is super hard when you think about the wildfires,” Joyce said. “You don’t want to be tone deaf.”

Nonetheless, she added, donor support during the pandemic has been tremendous. “All in all, our donors have been very helpful and responsive,” she said. “I’m really proud of them because they value the organization so much and the ability of the arts to enrich and entertain.”

One donor even included a large bequest to the theater in her will. “We received what, for us, was a very sizable donation,” Joyce said. “It was the biggest single donation we’ve ever received. It was nice, but we have to manage that carefully. It’s obviously not a sustainable model.”

Once the coronavirus passes, she said, she’s not worrying about luring actors, directors and crew back to the theater. “That is not going to be a problem, getting the creatives back. Many of them are already saying, ‘Forget the virus, I’ll do it now.’ My concerns are more about our infrastructure and paid staff.”

Cutting staff means losing institutional memory, Joyce said. And the theater can barely stand to lose more people, she added. Only five people work on the theater’s staff, and one of those positions is vacant and going unfilled.

Joyce became the executive director of the theater six years ago. Everything was going so well until the pandemic struck, she said. “We’ve seen such growth in the number of donors and improvements on the tech side,” she said. “We just invested in a major upgrade on the audio system, including surround sound. It was going to make its debut with ‘Company.’ Now it’s just sitting there gathering dust.”

Community theaters like the Pentacle face financial challenges even under the best of circumstances, Schoaps said. “So many of Oregon’s active theaters are community-based and run on a pretty small budget compared with professional theaters and touring companies,” he said. “It’s even more challenging for community theaters and smaller houses.”

As theater people, Schoaps and his family try to find alternative ways to express themselves. “Zoom and other platforms like that have been a real godsend for people like us who want to perform,” he said.

However, virtual platforms cannot replace the fellowship of other theater folk.

“That’s what I miss the most,” Schoaps said. “We have a big family at the Pentacle, Anyone involved in community theater knows what that means once you’re bitten by the bug. I did my first show at the Pentacle in 1976. It’s been my second home ever since. It’s an amazing place to be and an amazing group of people to work with.”

Joyce said she is glad people love the Pentacle enough to miss it. “It’s a treasure.”

Azar asked if Trump could have done more to slow pandemic

Cold temperatures and wintry weather to impact much of central US

Fluency in a second language boosts your brain