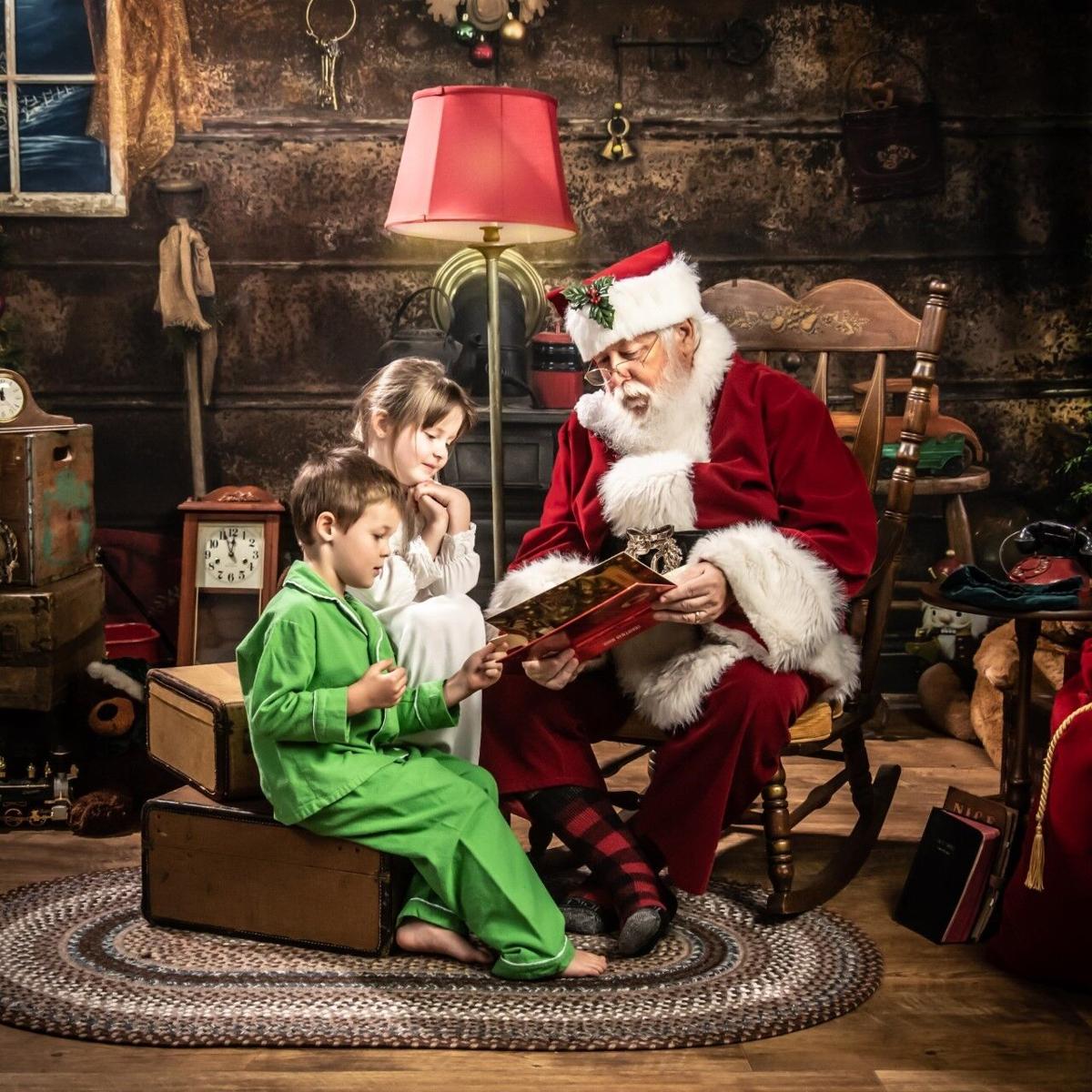 Santa Claus shares quality time with children at Haugen's Galleri Portrait Studio in Monmouth while being photographed by Miriam Haugen. Legend has it that Ken Lehto of Monmouth helps Haugen provide the annual Santa Experience Oregon. 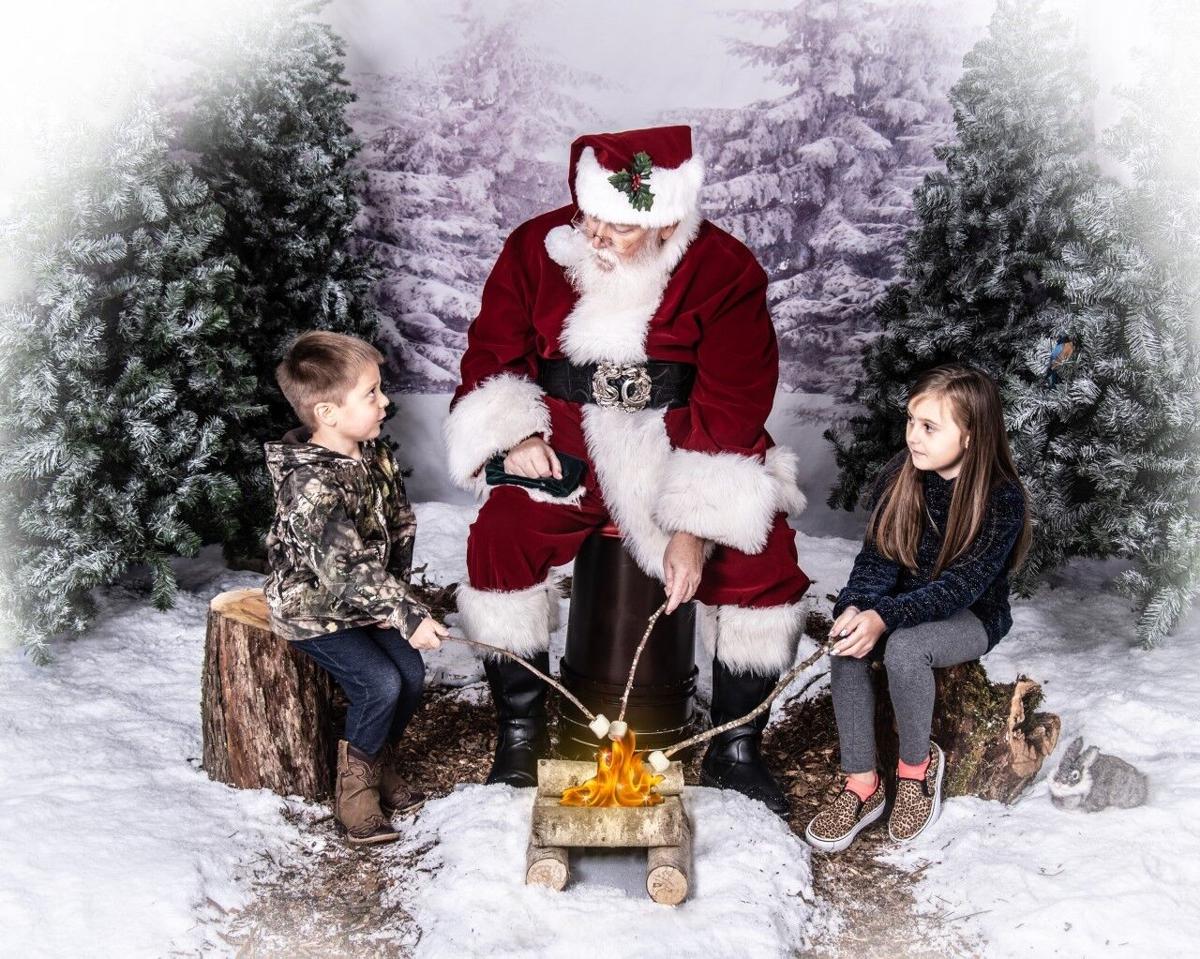 Miriam Haugen of Haugen's Galleri Portrait Studio in Monmouth provides more than annual pictures with Santa. With the help of local resident Ken Lehto, she provides children with a memorable experience with Santa, complete with milk, cookies and the occasional marshmallow.

Santa Claus shares quality time with children at Haugen's Galleri Portrait Studio in Monmouth while being photographed by Miriam Haugen. Legend has it that Ken Lehto of Monmouth helps Haugen provide the annual Santa Experience Oregon.

Miriam Haugen of Haugen's Galleri Portrait Studio in Monmouth provides more than annual pictures with Santa. With the help of local resident Ken Lehto, she provides children with a memorable experience with Santa, complete with milk, cookies and the occasional marshmallow.

Be patient with him. He was born in the year 279. And 1,750-year-old men have a tendency to nod off — especially after stuffing themselves with milk and cookies.

Besides, Ken Lehto of Monmouth is something of a method actor.

Nodding off in the middle of a conversation gives his performance as St. Nicholas a certain verisimilitude. It also gives children a chance to wake him and engage in the experience beyond merely beseeching the throne for the usual slate of presents.

Believability is the key to Santa Experience Oregon at Haugen’s Galleri Portrait Studio in Monmouth, said photographer Miriam Haugen. She offers families more than keepsake pictures of children with the big man.

You better watch out: Santa safety in 2020

When families arrive, she presents children with vintage nightgowns and pajamas. They sit down, and Haugen tells them a story. She tells them of a great big box tied with ribbon just beyond the sight. Inside the box are cookies — and an offer to share milk and cookies during a personal audience with Santa.

“There’s a lot of time for those children who are shy or never quick to warm up,” Haugen said. “Just knowing there’s cookie and milk waiting helps break down that nervousness.”

Children don’t have to sit on Santa’s lap or touch him in any way. In fact, during this year’s COVID-19 pandemic, Haugen and Lehto discouraged it. They put a number of safety protocols in place, she said.

“It’s a large space with lots of air flow,” said Haugen. “I try to avoid having the children touch Santa. They’re sitting next to him, but they’re not touching him.”

Lehto said Haugen also checks the temperatures of both adults and children as they come in.

“We wear masks, just not in the photographs,” he said. “It would probably be better if we learned to hold our breath while she takes photographs, but so far, so good.”

After the milk and cookies, children find their names in a magic leather bound book.

“There’s a list of every toy they’ve ever dreamed of,” Haugen said. “It’s written in the eflish language. Santa sprinkles magic dust on it to activate it. Then whatever they write in it goes straight to the North Pole. How cool is that?”

The whole thing is actually pretty cool, she said.

“I’m directing, but I’m not posing,” she said. “Most of the children are hardly aware I’m even taking photographs. Only the camera can see the magic.”

She met Lehto when she and her husband Neil were students at Western Oregon University (Oregon College of Education at the time). The Haugens opened their photography studio in 1977, moving to Main Street in 1978.

Cynical children attempting to pull his beard are in for a surprise, Lehto said. It’s attached. He’s been playing Santa for 21 years now. After the first year, he decided to grow his own set of whiskers.

“I trim it a bit in the spring, but other than that, I pretty much have to let it grow year round,” he said.

He began his jolly career as the Santa for the annual lighting of the giant sequoia at Western Oregon University, holding forth afterwards at the Werner University Center.

“The guy who had been playing Santa for the center hadn’t been enjoying it,” Lehto remembered. “The first year, I rented a costume and a fake beard and rode in the fire truck in the parade. Then every year, they would ask me to do it again. I decided I had better grow my own beard. The fake beard was too hot and uncomfortable.”

Churches and other organizations approached him to play Santa, including officials at Polk County Fire District No, 1.”

“A couple of years ago, I started losing a little bit of weight,” Lehto recalled. “Some of the people who were hiring me were a little concerned.”

He told them it was more important for him to lose weight, and if that meant he would have to wear padding, so be it.

“They worked me to death, but they were nice people,” he said. “It didn’t seem I had much time in December to do anything but play Santa.”

The carousel gig ended this year because of the pandemic. Haugen more than picked up the slack, Lehto said.

“She’s keeping me pretty busy,” he said. “A lot of the people, I guess, want to have nice, fancy photos of Santa and their kids.”

Last weekend was officially the end of Santa Experience Oregon for the year, but Haugen said she might be able to squeeze in another family or two. However, with it getting later in the season, she makes no promises.

“I had been doing little mini-session photo portraits with Santa for a number of years,” Haugen said. “Then I met a photographer from the East Coast who said, ‘You need to do the Santa Claus Experience.’ Midwest and East photographers do a more artful, storytelling experience with Santa.”

After that, she added, she was hooked.