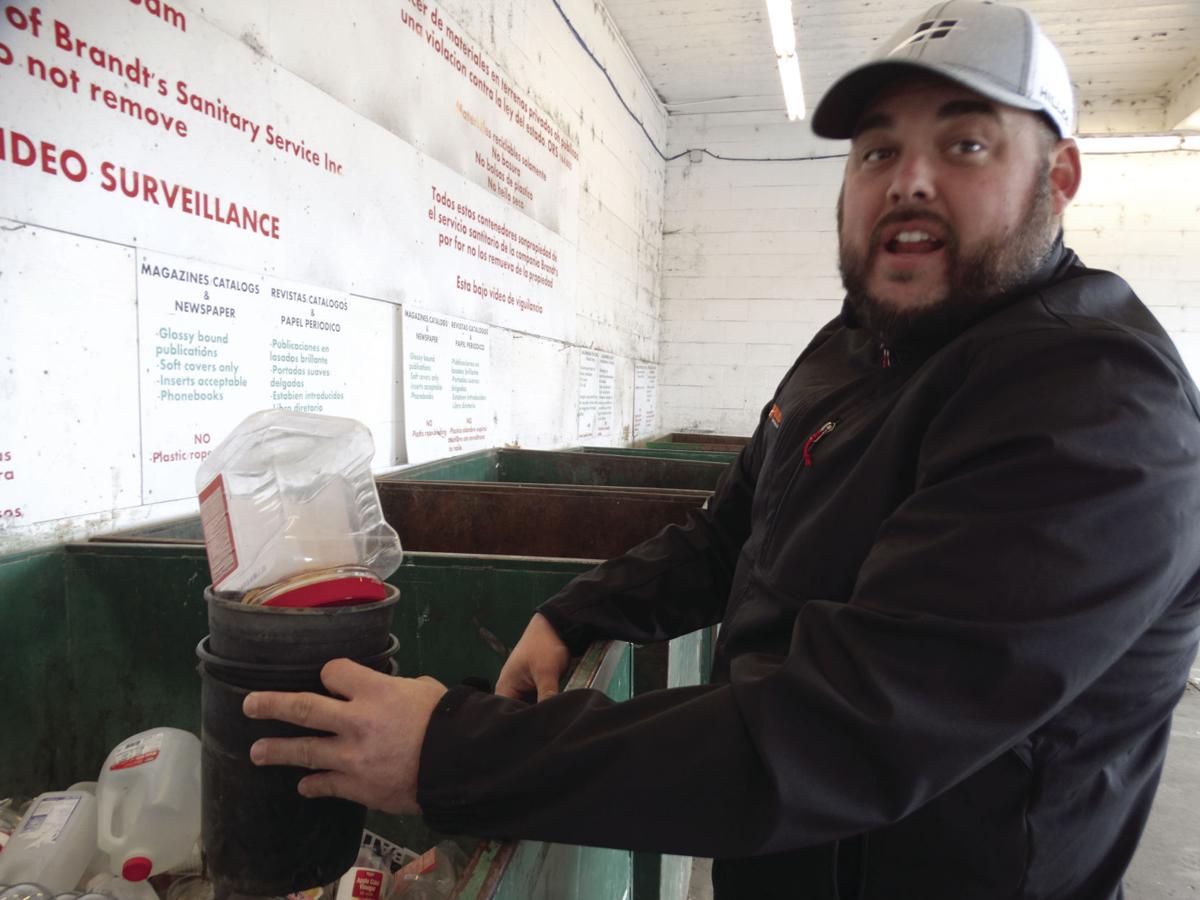 Josh Brandt shows materials that are not recyclable, such as plastic pots. 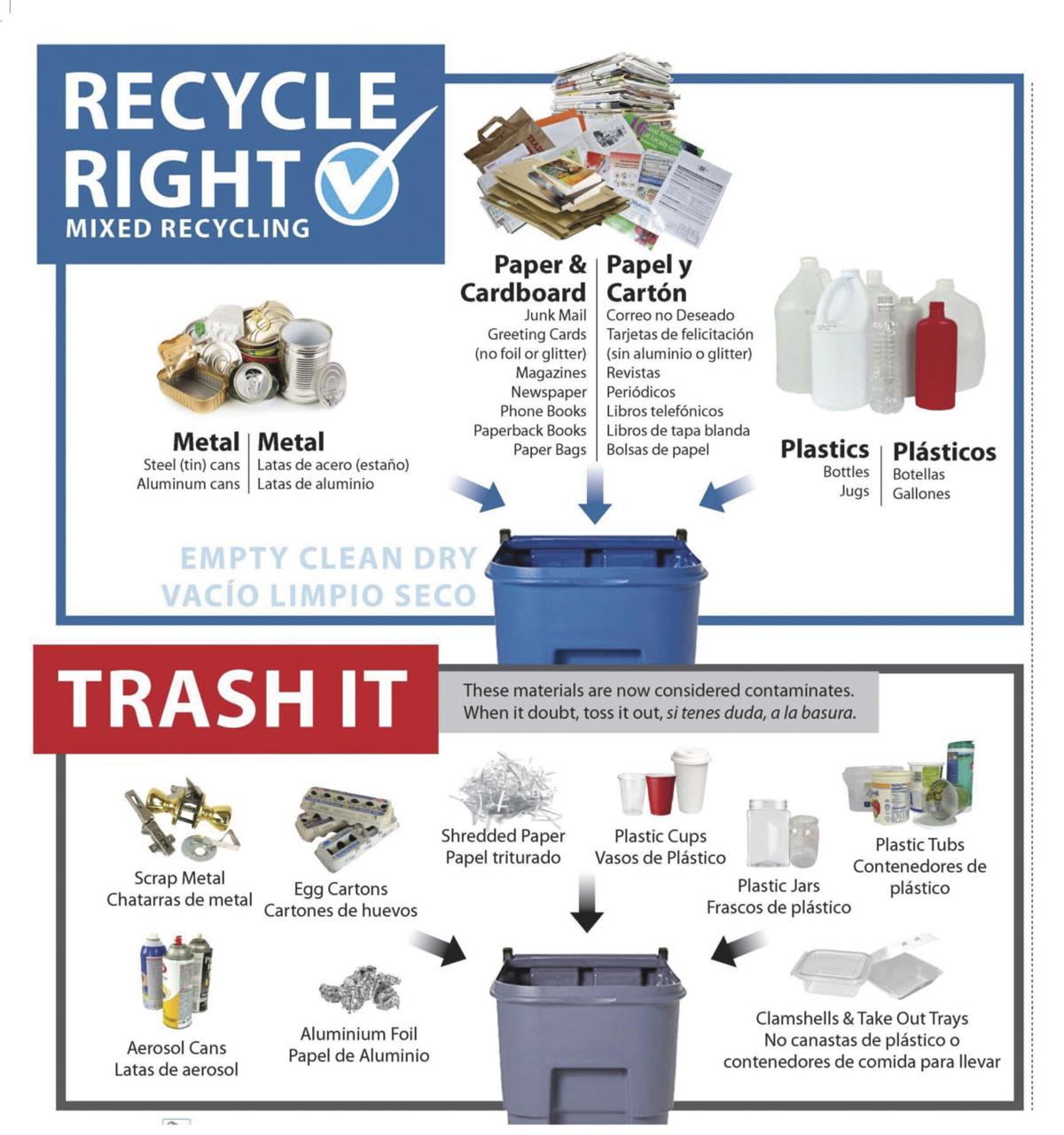 Josh Brandt shows materials that are not recyclable, such as plastic pots.

MONMOUTH/INDEPENDENCE — Josh Brandt, manager for Brandt’s Sanitary Service, said he has spent a lot of time learning about recycling in the last few months.

“The tough thing is, for all of us it came as somewhat of a surprise,” he said. “It went from China being a market that was viable for us to utilize to basically being shut down completely. I mean ships of items sent over being returned. That cost then gets pushed back on us and both ways.”

“China now wants 3 percent of 1 percent of contamination levels,” he said. “I know we’ve been as high as 15 percent, which doesn’t sound terrible for the amount of people who are served. For the most part, a lot of it is good. But trying to go from a 15 percent average to now under 1 percent is a big process. It’s a big mountain to climb.”

In efforts to clean up recycling, many haulers are limiting what they will take in co-mingled bins, focusing on No. 1 and No. 2 plastics, and eliminating food-contaminated cardboard items such as egg cartons and pizza boxes.

“You need to do the dishes with your plastics,” he said. “It seems crazy, but they have to be rinsed, cleaned and dried before they’re put in recycling.”

When one person doesn’t completely clean out a hummus container, for example, it can end up turning a whole truck of recyclables into trash.

Brandt said as that one container makes its trip from the consumer’s home to the compactors to the recycling center, it may get hot and the food residue may liquefy, dripping out onto otherwise clean, recyclable items.

“So now the good stuff that was put in recycling is now contaminated,” he said. “The idea of co-mingling — your neighbor’s going on the same truck as yours; the neighbor after that’s going in … so if one person in that row isn’t doing their job, in a sense the whole truck is contaminated to China’s standards.”

For now, Brandt said his option is to stop accepting some things that used to be considered recyclable.

“To get our numbers where we need to be, to meet standards, because if we don’t meet these standards, it’s going to become a bigger problem to where who knows what happens to recycling,” he said.

Any plastic containers less than 12 ounces needs to be thrown away, Brandt said.

The list goes on to include plastic tubs, such as those that hold hummus, yogurt and sour cream.

“Egg cartons are no more,” Brandt said. “A lot of people put those in cardboard. It’s one of those things that’s tough to say, but when it doubt, throw it out. It would be great if we didn’t have to deal with it that way, but because it’s co-mingled and people aren’t doing their jobs, it has to be that way.”

Brandt said he understands people get busy and don’t want to take the time to clean, rinse and dry plastics and cans.

“If you don’t feel the need that you want to clean, rinse and dry your plastics, all we ask is that you throw them away instead,” he said. “Right now, if you want to recycle, there’s no recycling at 80 percent. We need people to do 100 percent recycling and do a great job in order for this to still be a thing.”

Leaders in the industry are looking for places Oregon can send its recycling, Brandt said.

“I was hoping maybe the government would step up and say, ‘Here’s what we can do from an Oregon standpoint, how we can handle our recycling,’ and that just hasn’t happened,” Brandt said. “That project is far too big for me.”

Once consumers get better at recycling and contamination levels decrease, Brandt said he hopes his company — and haulers throughout the state — can resume accepting plastics labeled No. 1 through No. 7 again.

“I think for the most part, everybody is good,” Brandt said. “I think for the most part, the ones who want to do it are good. It’s just, unfortunately, we’re doing B work instead of A work. We’re good. Oregon’s good at recycling. We do a lot more than what a lot of other states are, but we’re held to a higher standard, so we need to make sure we’re in the honors classes all the time. Make sure you’re way up there doing the A work, then we’ll get a lot better.”

Brandt said once consumers and haulers retrain themselves on recycling, we’ll look back and laugh about it.

“We’ll say, ‘Hey, can you believe we used to have meetings about how nasty our recycling was? Now look, it’s all worked itself out,’” he said.

This 102-year-old woman has survived a pandemic twice