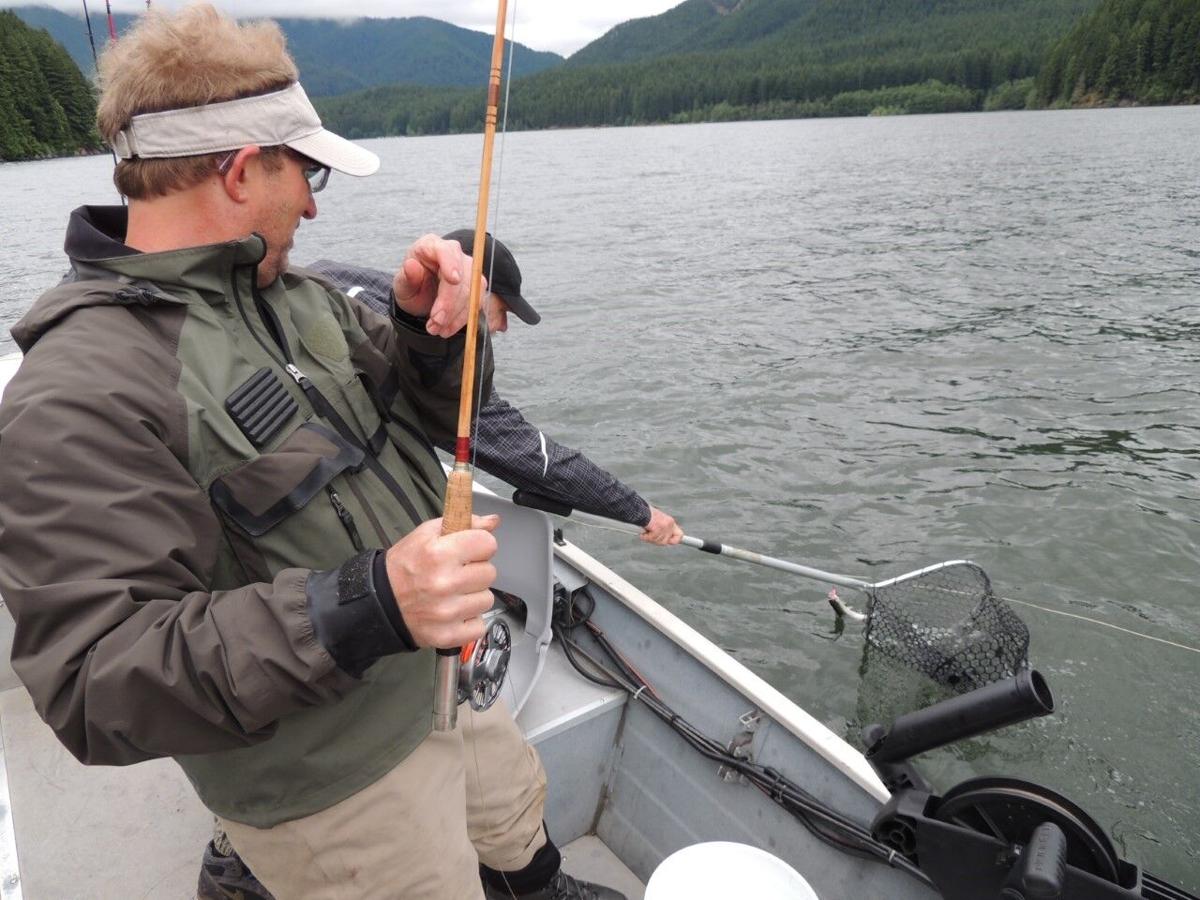 Henry Hughes on his boat The Lucky Skunk. 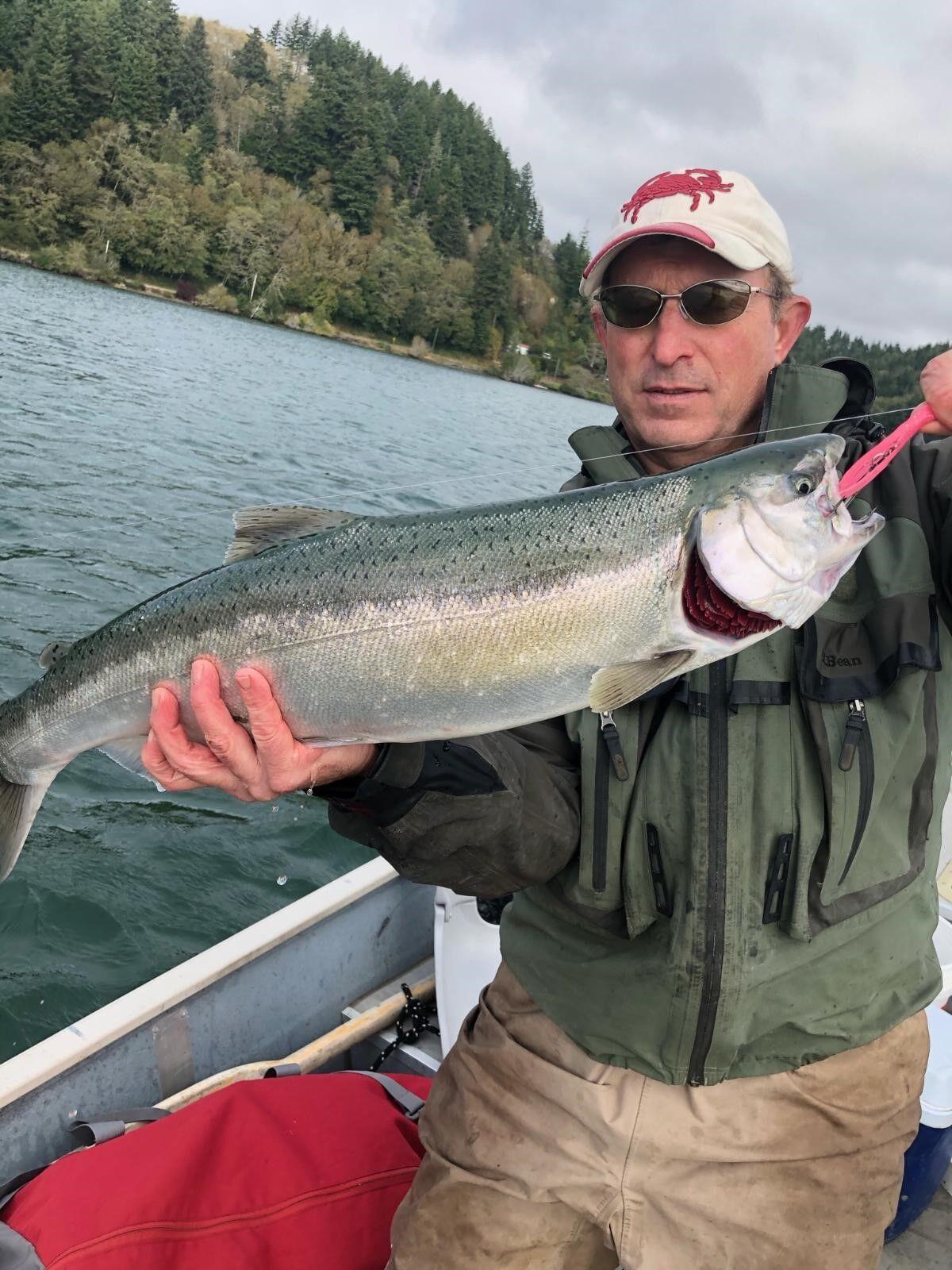 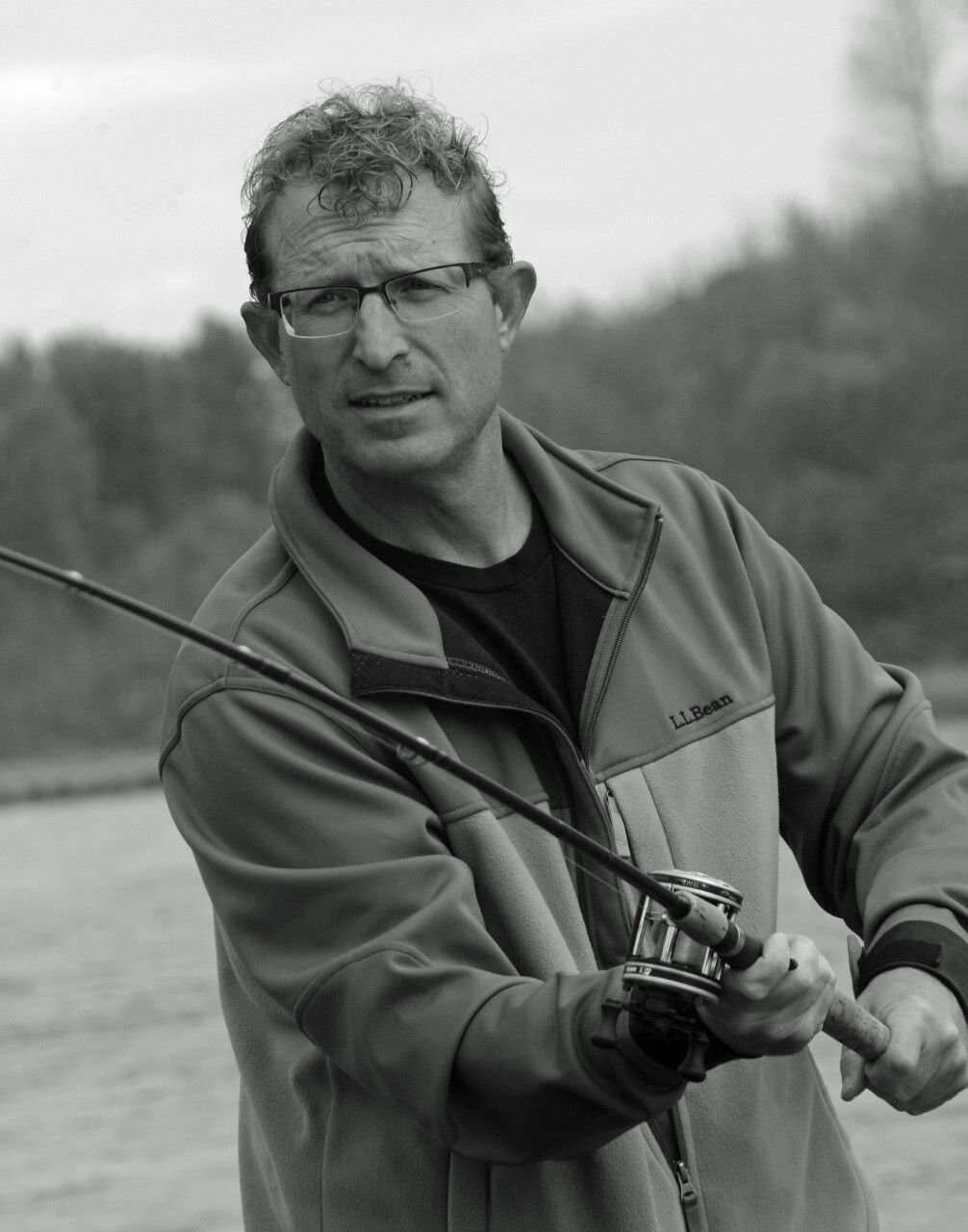 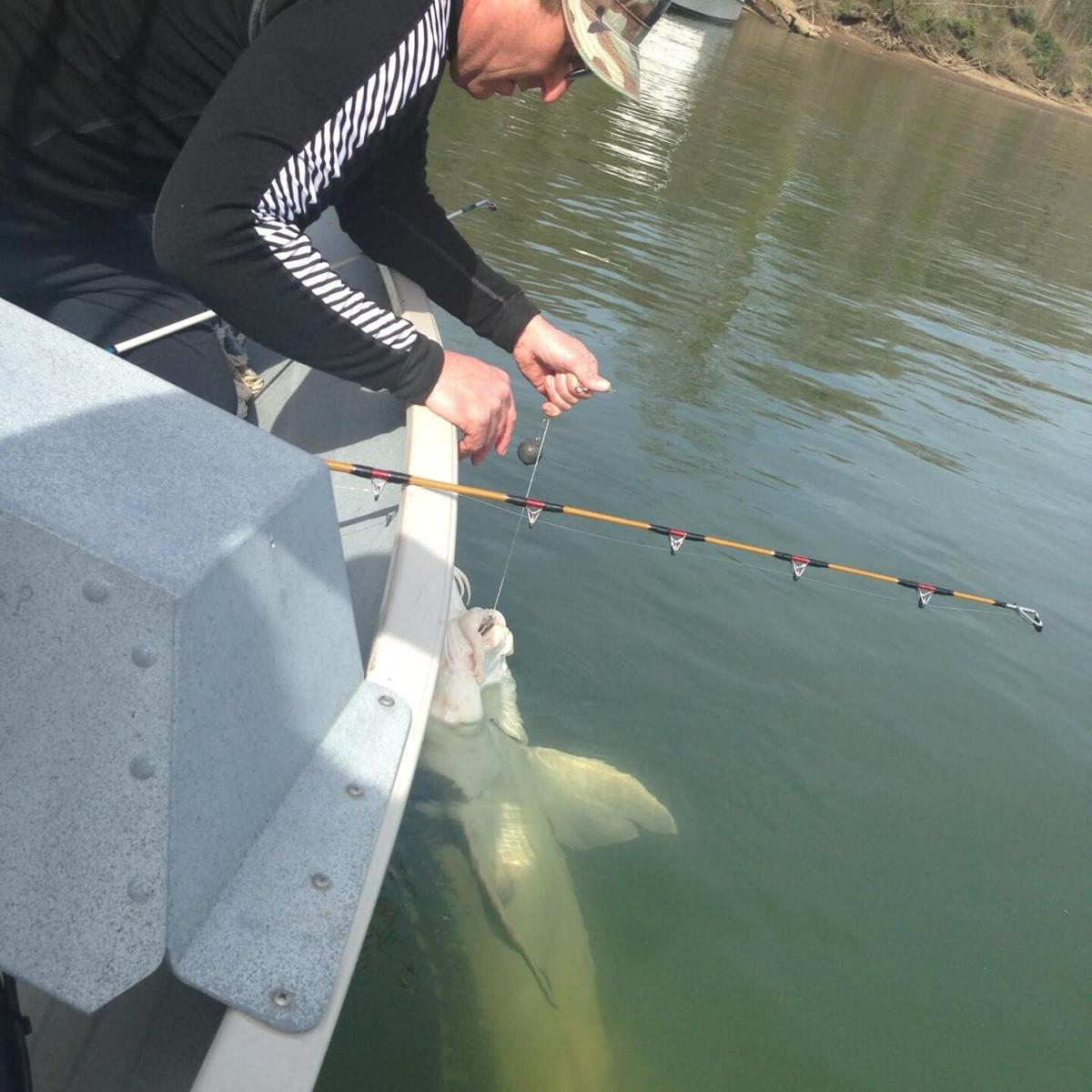 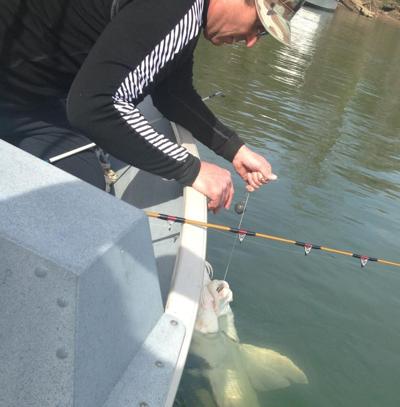 Henry Hughes on his boat The Lucky Skunk.

“Rivers and the inhabitants of the watery elements are made for wise men to contemplate and for fools to pass by without consideration.”

It is truly a world gone mad, but not on the water.

Fortunately for Henry Hughes, water covers 71% of the world’s surface. All he needs to regain serenity is his fishing pole and tackle box.

Whenever it is a damp, drizzly November in his soul, whenever he feels like deliberately stepping into the street and methodically knocking people’s hats off, Hughes takes off a little to see the watery part of the world.

“It is a way I have of driving off the spleen and regulating the circulation.”

That line comes from the opening paragraph of Herman Melville’s “Moby Dick. Hughes knows it well. An English professor at Western Oregon University, Hughes specializes in the works of Melville. His other passion is fishing.

He highly recommends it as a form of therapy, especially in 2020.

Just last week, he told his students about a corrupt ruler in ancient China who abdicated his position so he could spend the rest of his life fishing the Wei River.

“I really take that to heart,” Hughes said. “Fishing is my way of escaping the complexities and stresses of our times.”

And not just these times of raging politics and pandemics.

“It’s a lifelong practice,” he said. “When I feel depressed or worried, I go fishing and work through overwhelming stress and sadness. When I lose someone, I meditate and restore myself through fishing.”

It helps him deal with politics as well, he added.

“I’m not a political activist,” he said. “I vote. I have my views, and I promote cultural and humanitarian diversity among my students, but I’m not an activist. I find fishing to be a very important respite.”

Hughes’ 2016 book “Back Seat With Fish” comes out in paperback this winter. The personal memoir looks at lifetime of fishing beginning with this childhood in Long Island, New York. However, it is about a lot more than fishing.

It chronicles interactions with human beings as such as fish — from the tribes of South Dakota to the African-American communities of Mississippi to the waterside inhabitants of Beijing. Along the way, Hughes learns and offers lessons on race, culture, gender and geography  — all seen from the reel of a fishing pole.

“Fishing becomes the through line which I use to discuss friendships and romance and life in general,” Hughes said.

Many young men acquire their love of fishing from their fathers. Not Hughes.

“My father hated fishing, but he was a good dad,” he said.

His father, a crane operator and construction worker, bought a small wooden boat and kept the motor running so young Henry could go fishing. “We fumbled through it,” Hughes said.

“Fishing was just part of the environment when I was growing up,” he said. “Where we lived, there was a little fishing fleet. When I saw those guys and how hard they worked, I decided I wanted a cushy job, but I still longed to fish. Some of the best fishing in the world is on Long Island. I was one of those kids who loved looking into the water.”

Back then, he added, kids took few precautions. “I was 13 years old, but I had a lot of responsibility,” he said. “We went out into the sound alone and never wore life jackets.”

The same early romantic nature that led him to fishing may also have led him to becoming a writer, poet and English professor. He spent much of his childhood immersed in the works of Melville and other tales of life on the high seas.

“Whales were considered just big fish,” he said. “In fact, they were called fish. My scholarly interests definitely fishtailed (as it were) with my outdoor passion. Much of Melville’s work is very much steeped in the mysteries of the water and what those creatures have to say to us.”

Before writing his book, Hughes revisited some of the waters he fished earlier in his life to experience anew their scent and reflections. “We have memories of our youth, but sometimes we remember things wrong or revise the details,” he said.

Fishing has a long tradition in literature, Hughes said.

The first major nonfiction book on fishing, “A Treatyse of Fysshynge Wyth an Angle,” was written in England in 1496 by Dame Juliana Berners, the prioress at the Priory of St. Mary of Sopwell near St. Albans in Hertfordshire. The book includes prescient remarks on the virtues of environmental conservation.

Berners is often overlooked by historians, said Hughes. They pay more attention to “The Compleat Angler,” written 150 years later by Izaak Walton. Yet Berners wrote extensively not only about fishing, but also heraldry, hawking and hunting.

She may have been the first person to devote a book to fishing, but she was hardly the last. “A lot of people have written about fishing more than any other sport,” Hughes said. “It’s a attracted a lot of literary attention.”

Fishing features thematically in the works of such authors at Ernest Hemingway, Guy de Maupassant and Anton Chekhov. Hughes likes how Chekhov referred to fishing as “the great leveler.”

In addition to “Back Seat With Fish,” Hughes has published “The Art of Angling,” a collection of poems about fishing, as well as two other volumes of poetry.

“I like working on short forms because I can concentrate in smaller amounts of time,” he said.

Fishing makes an interesting contrast to writing, he added.

“Casting, whether you’re fly-casting or spin-casting, is a repetitive activity,” said Hughes. “Your head is not full of words. It’s full of the rhythms and sensations of the water. I love writing, but writing requires a full cognitive concentration, but with fishing, it still requires concentration, but it’s more meditative.”

Fishing helps Hughes find what taoists call the “uncarved block” — referring to what humans are at their core, at the essence of their beings. It is the pure self, the original state before it was shaped by outside forces.

“Fishing will help you cultivate patience and tranquility because you have to be in harmony with nature,” he said. “The intense concentration helps you not think of other things. You concentrate on fishing and you can’t think about other things. I come back refreshed and emotionally restored.”

Or as Izaak Walton wrote in 1653, “God never did make a more calm, quite, innocent recreation than angling.”

Hughes would agree. Most weekends find him on his 16-foot fishing boat, the Lucky Skunk.

“The name of my boat raises some eyebrows, especially from superstitious anglers,” Hughes said. “The colloquial term ‘skunked’ means to have caught no fish for the day. I wanted to reclaim that bad juju and honor a beautiful animal.”

Around Polk County, Hughes has found some luck with salmon along the Luckiamute and Willamette rivers. However, he said, the best fishing along the Willamette can be found outside the county.

Polk County fishing areas such as the Social Security Fishing Hole off Halls Ferry Road are OK, he said, but it’s mostly bass fishing. Hughes spent last Friday fishing and crabbing when he caught and released coho salmon in the Yaquina River.

He usually avoids catching and releasing. It seems cruel to put a fish through unnecessary torture without intending to eat it, he said. “Then it’s just for pleasure,” he added. “It’s definitely less defensible morally than fishing for food.”

“Even with COVID, you can still go fishing,” said Hughes. “With all this political commotion, there’s solace and healing in fishing.”

She lost her husband to Covid-19. Hear her tough words for Trump

"[W]henever he feels like deliberately stepping into the street and methodically knocking people’s hats off" he turns to torturing nonhuman animals instead!

"'When I lose someone, I meditate and restore myself through fishing.'”

By taking someone else's life? How appallingly ironic. Science has shown that fish can suffer fear and pain. They are sentient beings who deserve respect and compassion not gratuitous cruelty.

Fishing is cruel, and it isn't justified by needlessly using the fish as food. All of the nutrients we need in order to thrive can be obtained more healthfully, humanely, and environmentally responsibly from plant sources.

Fishing isn't sport, the fish are victims not willing participants. It's no more sporting than mugging someone. There are plenty of nonviolent ways to refresh ourselves, fishing is not one of them.

“Rivers and the inhabitants of the watery elements are made for wise men to contemplate and for fools to pass by without consideration.”

What is foolish, and so very wrong, is to be so lacking in moral consideration for those inhabitants. They have a strong will to live, and needlessly harming/killing them is unjustifiable.