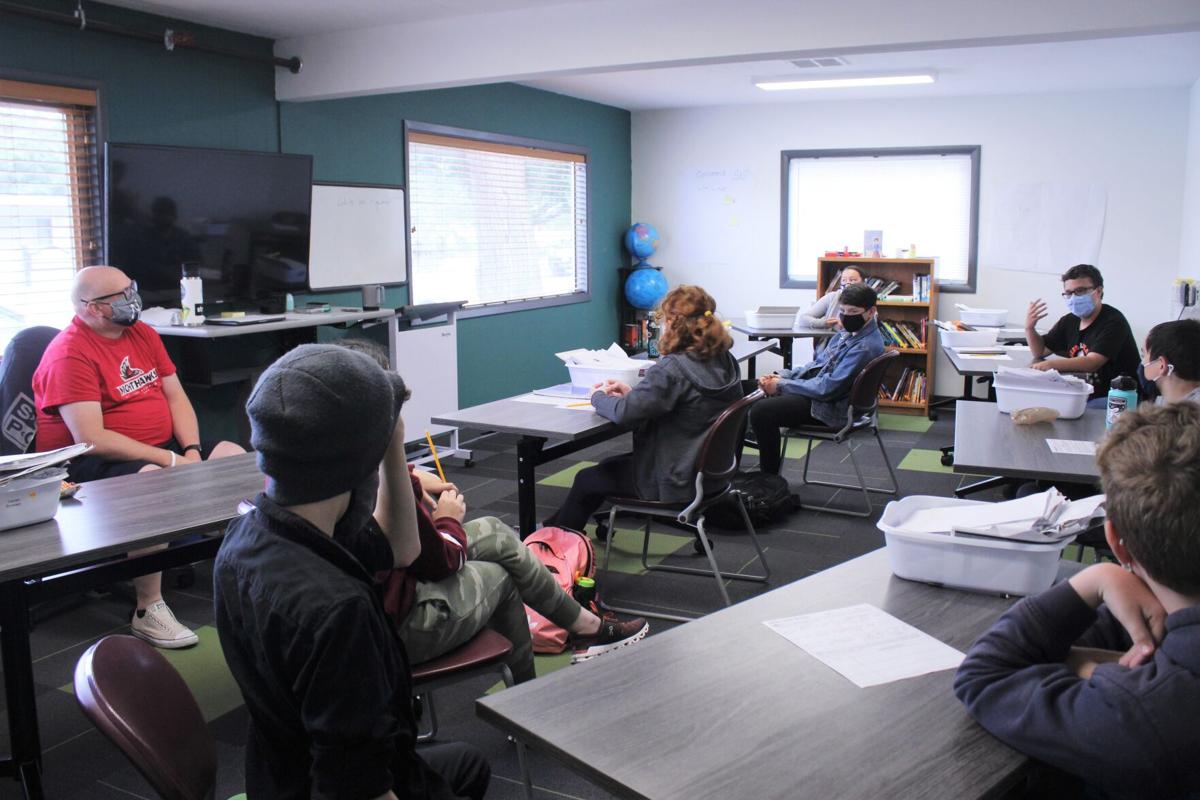 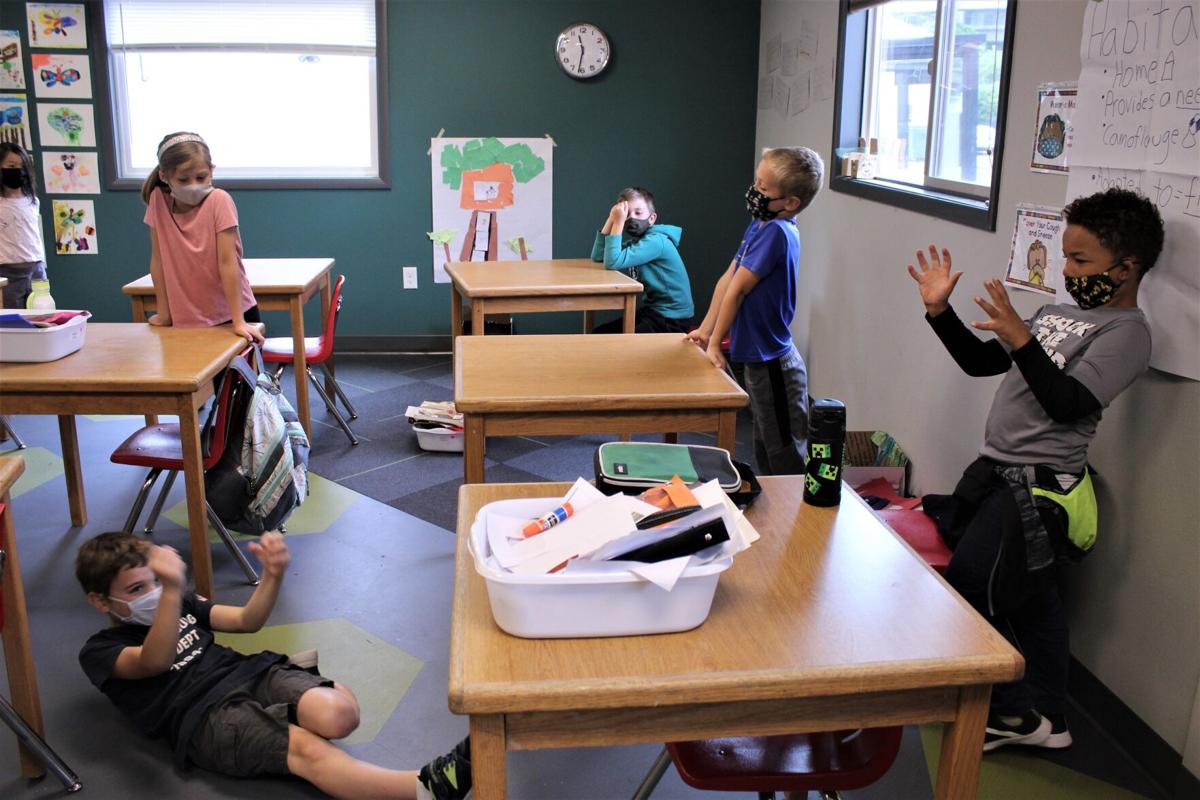 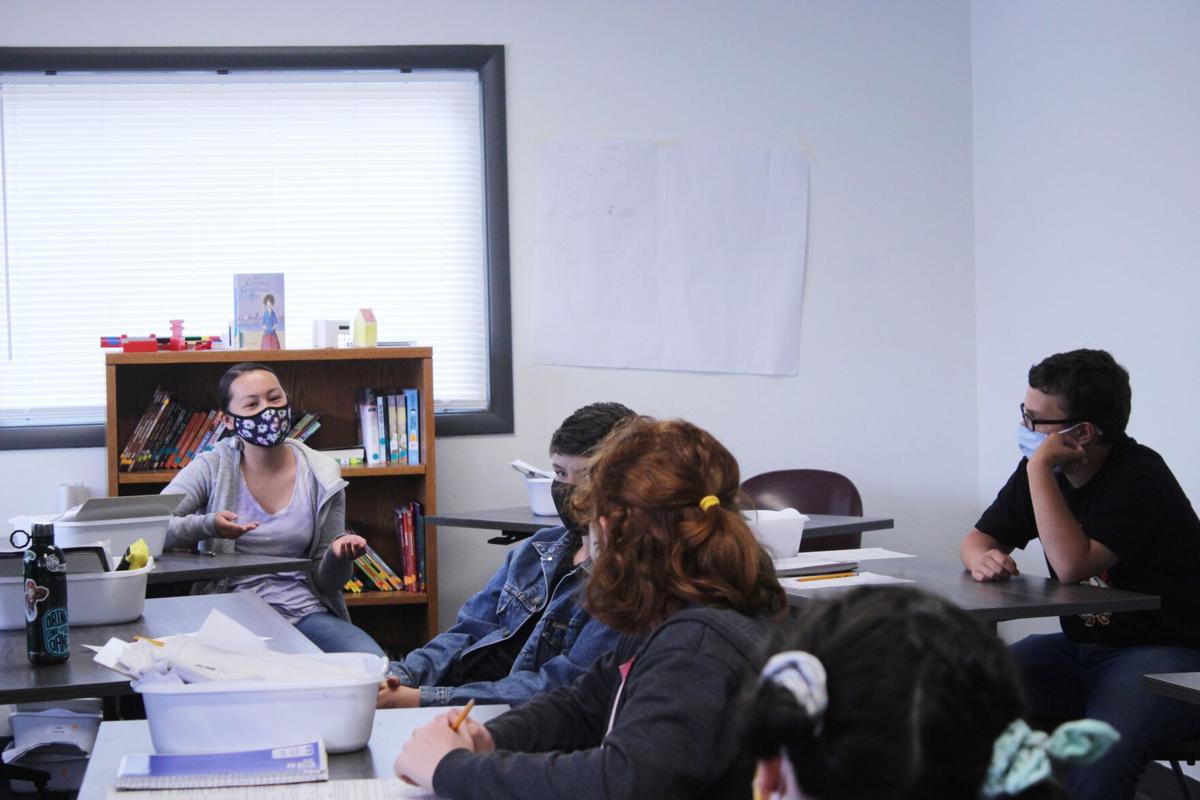 Middle school students debate a topic during a class at Dallas Community School.

Middle school students debate a topic during a class at Dallas Community School.

The donor was dressed quite unusually, likely in an attempt to stay anonymous.

“It was so funny because he came in this costume, this Doctor Death costume, so he was all in black. Then he has his whole head covering thing with the snout on it,” Conlon said. “I should have been terrified and slammed the door.”

Conlon is glad he didn’t.

“He said ‘I have a donation that I would like to give to the school to be used any way you see fit,’” Conlon said. “I have no clue who it was.”

The man handed Conlon an envelope filled with $4,000 in cash.

“We’ll be using those funds for our summer school offering for kids that are interested in participating in summer school,” Conlon said. “It will give kids an opportunity to have an expanded summer school program.”

If not summer school, there were plenty of other ways the school could have used the donation.

DCS just recently completed a remodel and expansion of its current facility at 124 SW Walnut Ave., in Dallas, but it is already bursting at the seams. DCS is a public charter school that serves families that home-school their children, offering licensed teachers as educational guides and in-person enrichment classes that are optional, but popular.

Conlon said the school is on the look out for its “forever home” after already moving twice since it opened in 2015.

“When we moved into this space, we were thinking oh my gosh, look at all this space,” Conlon said. “Our population doubled for on-site classes and we’re limited by the building. It is going to meet our needs this next year.”

The additional space would give a permanent home to school’s proposed high school, which could open at some point in the next school year. Conlon said DCS had hoped to open by September, but Dallas School District officials — DCS is sponsored by Dallas — said that time frame isn’t long enough to thoroughly review the proposal and amend the contract between DCS and DSD.

Dallas Superintendent Andy Bellando commended DCS’ efforts to create a high school to this point, but said the school and district still have quite a bit of work left before approval can be given.

“You as a board have to reach a point of comfort in coming to this decision. Bill and I have also had a couple of good conversations about timeline and what that could look like. This is a big move, a very important one,” Bellando said at a recent DSD board meeting. “I know that DCS has aspirations of beginning in the fall. I did share with Bill that that is too challenging of a timeline to meet. That if the board was to be in agreement with this proposal, there could be a future date, possibly even this year.”

Conlon said opening a high school had always been the goal of the DCS founders, and serious planning began three years ago. The program would be different than DCS’ K-8 offerings in that in-person attendance for core classes would be mandatory. Electives and other classes could be attended in-person or completed at home.

The program would focus a lot on having students work in teams.

“We think that that is very important. Industry has recognized and identified the need for incoming employees to be able to work successfully in teams,” Conlon said. “It used to be an industrialized world and that is changing now. The skill set the students need are not the skill sets probably that most of us went to school and prepared with.”

Families will have the choice to select an independent study option, which can be designed for the student based on required standards and approved by educators.

“That’s a really popular opinion with our families. They are really excited about that possibility because, again, our families are really, really wanting to continue to home school their kids, but they need some additional support,” Conlon said. “So, the way this will work is they will work with a guide and they will design a course based on standards. They will put that together and present it to a content jury of licensed teachers.”

DCS and DSD officials believe the proposal can be approved by mid-year.

“I do know some families are going to continue to home school, waiting for the Dallas Community School high school to open,” Conlon said. “There are some other concerns about opening mid-year and one of the biggest ones is staff. It will be difficult to hire staff in the middle of the year.”

Conlon said there will be 20 slots in the first year and that can grow to a cap of 100 in future years. He said the credits required for graduation will be the same as Dallas High School and students will participate in state testing.

Conlon said the high school will undergo a multi-year accreditation process to ensure its program is on par with other high schools in the state and country.

“There are different levels of accreditation, and the full accreditation is obviously the one we are seeking. It will take some time for us to put all of the pieces together,” Conlon said. “We want that for our kids. We want them to have high standard of education. We want them to be able to move from Dallas Community School to any other school they wish to attend.”

Conlon will be around for the final development and negotiations for the high school, but will retire from the school within the next year. He will step back from this role of executive director in September to hand the reins to a new director, LaCreole Middle School Principal Jamie Richardson.

Conlon will work with Richardson, who will be going from a traditional public school setting to a home-school charter school, for a transitional period through September and then will be available on a consulting basis after that.

He said his wife is finishing law school and the pair will move to Las Vegas, where she will start a new career, and he will begin a “retirement career.”

“She’s starting a new career and I will start a retirement career,” Conlon said, smiling.

Conlon said he believes the school will be in good hands after he leaves.

“I feel really good about where the school is right now,” Conlon said. “I think with Jamie, it’s the perfect time for him to step in, because he has a skill set that I think is going to really help launch the school in a little bit different direction.”

Though he will be in a different state, Conlon said he will still keep tabs on the school and cheer on its progress.

Knock Expands to Portland, Ore., Giving Homeowners the Power to Make a Non-Contingent Offer on Their New Home Before Listing