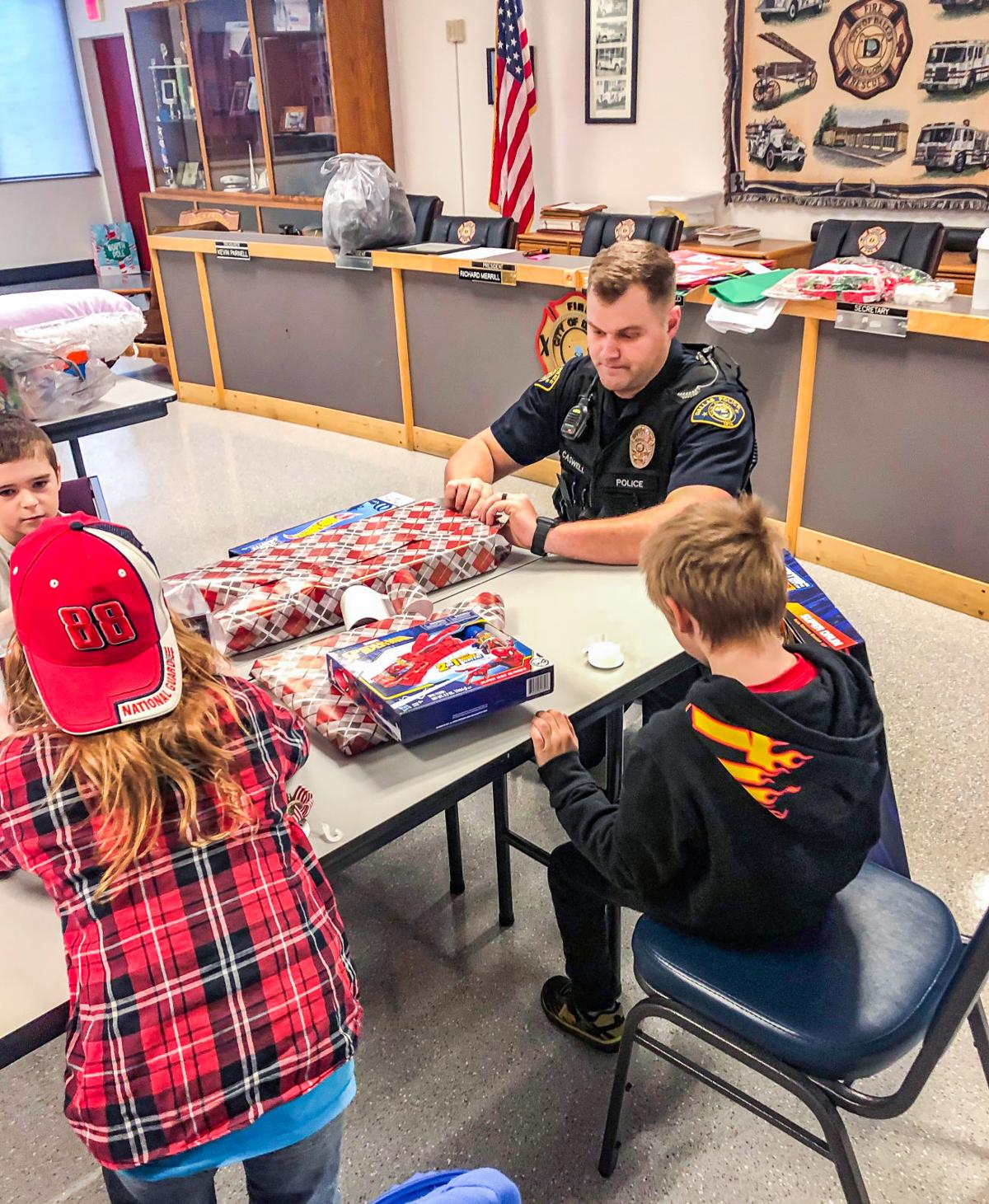 Officer Eric Caswell helps wrap gifts at Dallas Fire Station on Saturday as part of the DPD’s first Shop with a Cop event. 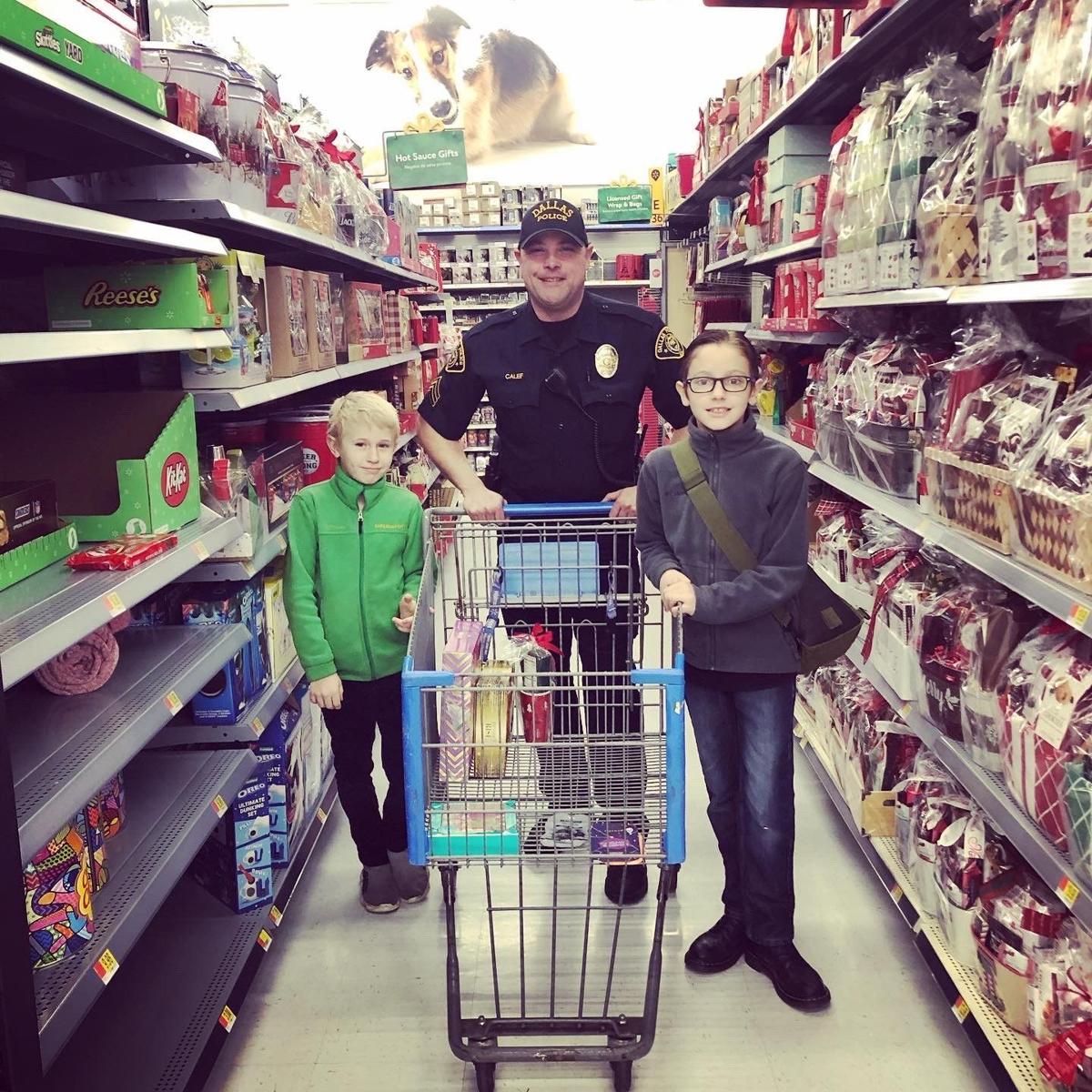 Dallas officers shopped with kids at Walmart on Saturday morning.

Officer Eric Caswell helps wrap gifts at Dallas Fire Station on Saturday as part of the DPD’s first Shop with a Cop event.

Dallas officers shopped with kids at Walmart on Saturday morning.

DALLAS — Fifteen children from Dallas schools were granted holiday wishes thanks to Dallas Police Department’s first “Shop with a Cop” event on Saturday.

DPD partnered with Dallas School District to select children whose families needed the most help this Christmas season, and took them shopping at Dallas Walmart.

“My kids go to school here in Dallas, and some of their friends have gone without shoes and coats, and a few of the officers were asking about Shop with a Cop, but our agency didn’t provide our own,” he said.

For years, Polk County has sponsored a program with the Polk County Sheriff’s Office and Grand Ronde Tribal Police. Dallas officers would join in on that event each year, but the children selected for the program were not from Dallas.

Caswell decided it was time for Dallas to have its own program, and enlisted Britneigh Hammill, the department’s police community liaison, to start fundraising for it.

“Him and I brainstormed ideas of how we can raise money to make sure that none of the funds come from anyone else’s pocket but our own,” Hammill said.

Pressed and Dutch Bros hosted fundraisers, and many other businesses gave money, including Squirrel’s Taxi, which donated $500. The Dallas police officer’s union pitched in another $800, and Mid-Columbia Bus Company donated a bus to transport the children from Walmart to the Dallas Fire Station, where the children and officers wrapped the gifts purchased.

The children were selected by teachers at Lyle and Oakdale Heights elementary schools.

“Both the principals were great,” Caswell said. “All the teachers at Lyle and Oakdale, and then the businesses ... we couldn’t have done it without them.”

The effort was so successful that the department tripled its fundraising goal.

“Because of that, we doubled the amount of kids we were able to sponsor. We originally were shooting for eight, and ended up with 15 kids,” Hammill said. “And because we doubled our funds, each kid went home with a brand new jacket and a pair of shoes on top of all the shopping they did with the officers.”

Caswell said it was exciting to see his idea come to fruition on Saturday.

“One of the little boys, when he opened up his bag and saw his jacket and shoes, he was ecstatic,” Caswell said. “He put them on and was doing laps around upstairs (at the fire station), running as fast as he could, talking about how fast he could run in his new shoes.”

The children, who were paired with an officer or department employee for the shopping and wrapping day, had a $100 limit on what they could spend, but that wasn’t strictly followed, according to Caswell.

“They had a $100 limit, but if they went over, we had enough funds to cover it,” he said. “It was almost a blank check for them to buy stuff for themselves and their family.”

Caswell and Hammill said the program will continue next year.

“The community really took it and ran with it. We were able to really get some good things for 15 kids,” Caswell said. “We are hoping to grow it and do an even bigger one next year.”

“He put them on and was doing laps around upstairs (at the fire station), running as fast as he could, talking about how fast he could run in his new shoes.”

Dershowitz: I'm like the kicker who can win the game