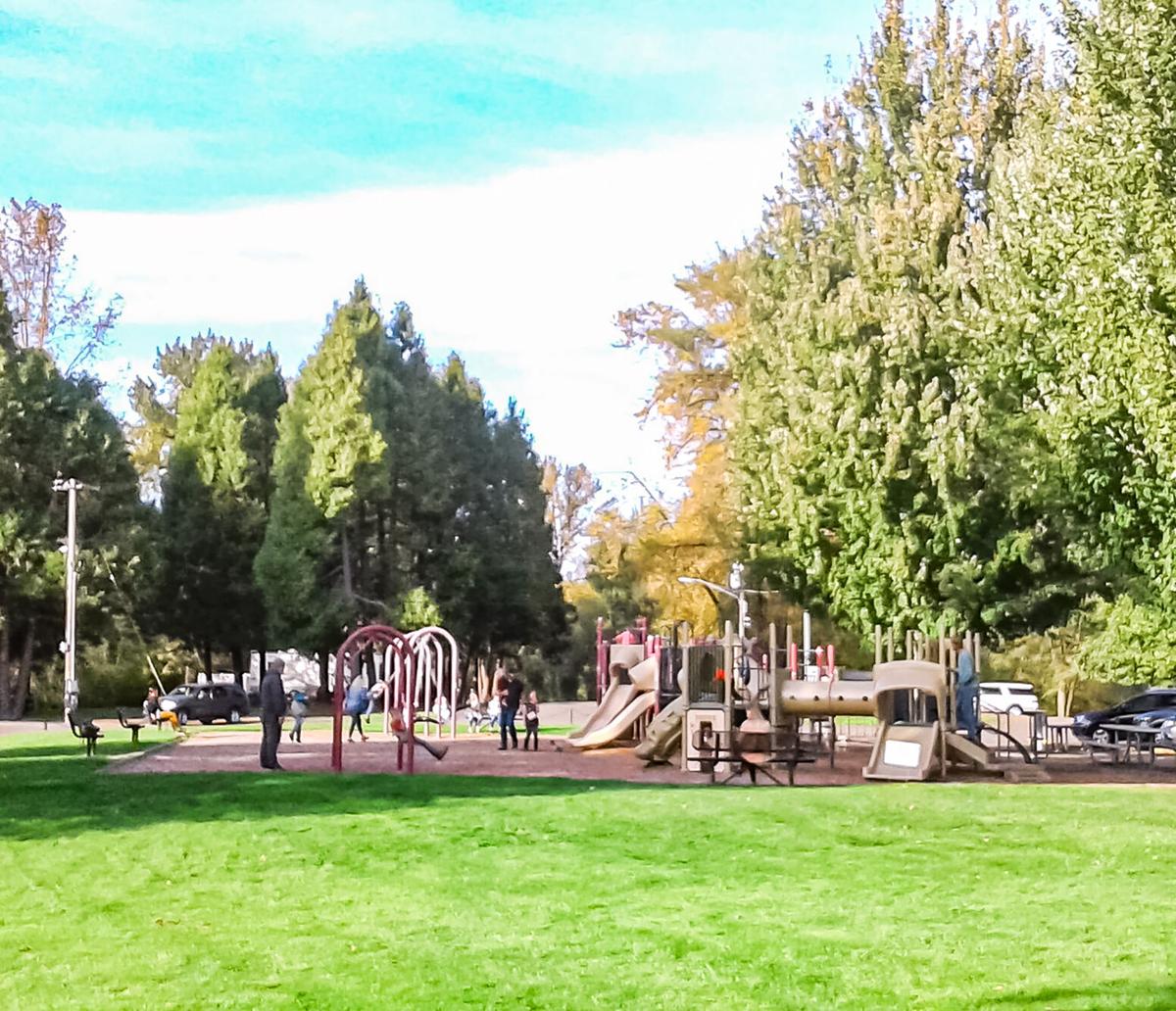 Riverview Park playground, the site of many parents-on-the-bench interviews last Saturday and Sunday. 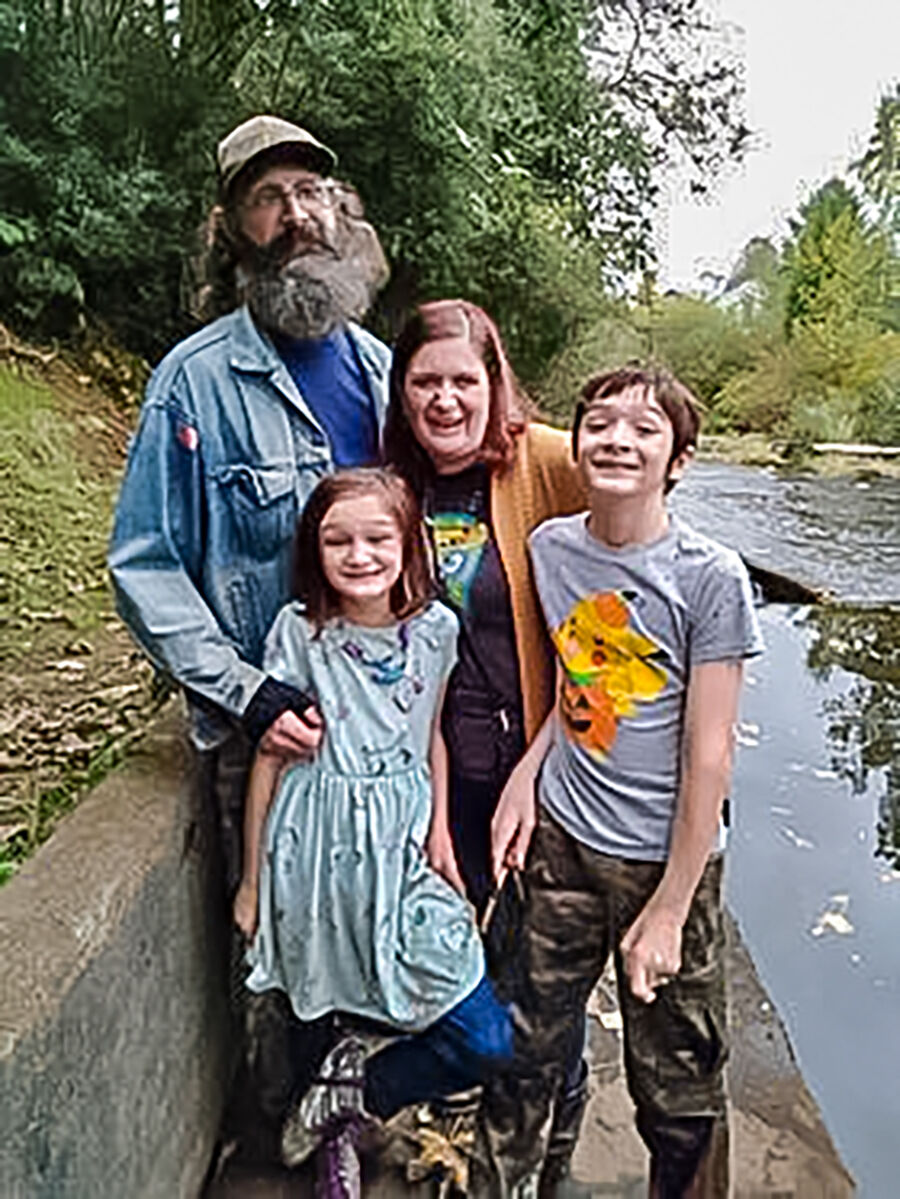 Riverview Park playground, the site of many parents-on-the-bench interviews last Saturday and Sunday.

INDEPENDENCE — It may be necessary to cry. Regular exercise can really help. However, the healthiest way to handle the painful, persistent struggle of the current pandemic is by connecting with other people.

That’s the advice from about a dozen parents at a busy playground in Independence, who last weekend offered tips and remedies for surviving COVID-19 — not for preventing the coronavirus infection but for battling the toll it’s taking on families. And, in interviews across Polk County, the same recommendations are being made. The general consensus: It doesn’t just take a whole village to raise a child, it also takes one to sustain an overburdened mother. Many are experiencing what some called “meltdown moments.”

“It can be a struggle,” said Tonia Hill, who has two children distance-learning at Ash Creek Elementary School in Independence-based Central School District 13J. Internet problems — loss of connectivity, now referred to as “zoom boots” — can prove frustrating for her son, said Hill.

Social support takes the pressure off, she explained. In her case, that ranges from chatting over the back fence with a neighbor in the same situation to “face-timing” with other parents who are experiencing similar challenges. “I would say reach out to teachers and friends if you and your kids are struggling,” she said. In fact, her son’s teacher is a source of “great support,” she said, adding that “I try to give it to her, too — letting her know how great she is.”

Hill and her husband Doug constantly tag-team to ensure their children are engaged online. To control the inevitable stress build-up, they stay active, taking walks as often as they can. Hill also makes time for her own workout, which offers her a break and also provides a boost, she said.

Still, it’s staying in touch with other parents that give needed doses of reassurance. For example, when another mother at her school confessed to having “cry-in-the-closet” times, Hill recalled that hearing about such tension-releasing tears “makes me feel better.” Another mom said she sometimes exits her living room to sit alone in her car, where soft radio music and a short time away can prove quite calming.

Though surveys show the duress of the pandemic affects all family members, working mothers have become a source of targeted study. In what is being called the nation’s first “she-cession” — a female-skewed recession ­— researchers have been documenting a distressing trend. Many women, like Hill, are doing double duty — meeting the demands of a job and overseeing remotely-delivered education to their children. Overwhelmingly, some of these mothers who work outside the home have opted to cut back on hours or drop out of the workforce completely.

There are two primary reasons why. Lockdown measures wiped out many jobs often occupied by women, from hair salons to food service. And, when schools closed, mothers left the workforce in high numbers to care for kids, according to the London-based Centre for Economic Policy Research, which issued a publication about the new phenomenon in early September.

“I don’t recommend navigating motherhood alone,” said Justine Netcher, who has three small children. To provide the means for mothers in Monmouth and Independence to link up, she co-coordinates “Mothers of Preschoolers & MOMSnext Kids,” which has a strong online presence that allows parents in similar phases of life to meet up, both virtually and in social-distancing ways. She finds the role invigorating. “I’ve fully embraced that I simply cannot pour from an ‘empty cup,’” she explained.

The underlying emotional effects of this pandemic were summed up recently in webinar sponsored by New Scientist magazine. In it, British psychologist Kimberley Wilson, author of “How to Build a Healthy Brain,” identified “three A’s” that have substantially risen: Anxiety, a state of heightened awareness that often causes a spike in stress hormones;  Attention demand, the need to be hyper-vigilant, particularly about taking new precautionary steps; Adaptation, the focus of time and energy that’s required to establish different routines.

The triple-A initials represent a good “umbrella” term that seems to reflect “that we all are anxious with changes, uncertainty, new roles, having to multi-task, work from home, juggling other responsibilities at the same time as work, and are socially isolated,” said Lauren Roscoe PhD, professor and department head of the psychological sciences department at Western Oregon University.

This past Saturday and Sunday, as parents sat on benches by the play equipment at Riverview Park in Independence, many said that getting outdoors – pushing their children on the swings or staging mock chases on the surrounding grass – is a terrific way to unwind. Most of the fathers credited their partners or wives with, as one dad put it, “holding down the fort.” However, many of the women said they would be unable to face the winter ahead without the support of family members and friends. Some cited their religious communities as helping them cope.

“Something that helped during the pandemic, and especially during the closures, was my faith,” Hill agreed. In fact, some Sundays she’d tune in for two or three different church services. “It helped me feel connected and gave me that boost I needed to get through the week,” she said.

At a time when most church activities are confined to sermons online, attendance is entirely different. But though “the church buildings may be closed” the church is not, observed the Rev. Paul Doellinger, a former full-time pastor who now fills in for other clergy at pulpits throughout the mid-Willamette Valley.

Parents use many “tools” to deal with the various stressors in their lives, he said -- and faith is one. “And so are things like jogging and regular exercising and being part of a self-help group,” he added. However, “my experience, after having been a pastor for the past 51 years, is that people of faith do have spiritual resources that they can and do call upon in times of crisis,’’ he said.

Additionally, some mothers are able to see a silver lining in the lifestyle change. Many reported more valuable family time.

“Remote learning is not an ideal situation and there are definitely subjects that are better taught in person than over Zoom, but I feel like our school and the teachers are doing the best that they can with adapting to this new situation and being responsive when we have a question or concern,” said Suzanne Teller, outreach coordinator for the Luckiamute Watershed Council in Independence. For her two sons, there have been a couple of benefits to online learning, she said.

What are those advantages? “First of all, being more engaged with what the boys are learning, knowing what their classwork is like on a day-to-day basis, and having more opportunities to partner with their teachers in their school experience,” she said. “Another benefit I have seen with their online schedule is that they have a full hour for lunch, rather than 20 minutes,” Teller said. “This gives the boys a real break from the classroom, and time for the brains to ‘turn off’ and rest for a good amount of time.”

That view was echoed by Ciera Atha, the executive assistant for the Polk County Board of Commissioners in Dallas. “I see that my son is getting more organized, learning how to manage himself,” she said. “When he fell behind on assignments earlier, during this switch-over, he learned how important it is to keep up,” she said.

However, business owner Heather Kovalski, of West Salem, worries that one outcome may be a regression in social skills for children. As the mother of two girls, the loss of “that face-to-face connection” with friends has been troubling to her. In fact, she suspects it has been “a little crippling” for her older daughter. There is no way to know how this sudden separation from a social life will affect either of her children, she said.

That’s a fear shared by many parents. “You just don’t know what will happen,” said one mother, who asked that her concerns be reported but not her name. “We are in a whole new world now and can’t help but wonder if our children will fall behind academically and socially from all this,” she said.

That’s a question that should have historic answers, according to Rev. Doellinger. “I do wish that pastors in 1919 had kept diaries and passed them on down to us, so we can see today what resources they developed and used during the Spanish Flu epidemic,” he said.

These Trump supporters say big tech is biased. Here's why they're on Parler

Clinton: Al Gore had courage to say what I didn't want to hear