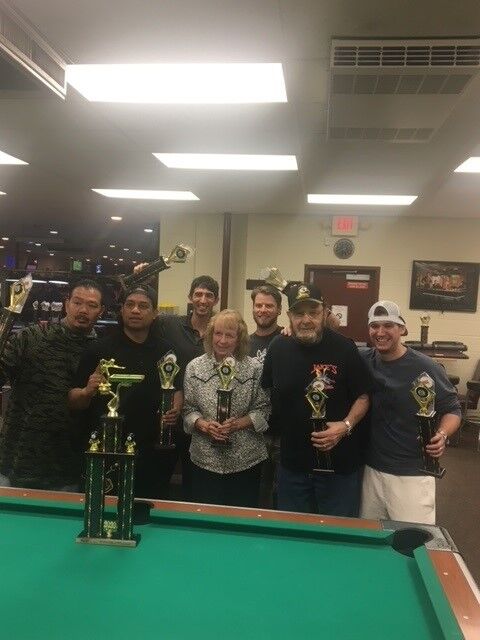 Jan Kiepke takes a shot in 8-ball en route to winning her match that helped propel her team, the Hustlers, to the APA national finals (top). Jan Kiepke’s teammates Brandon Sipe (right) and Randy Baker celebrate her winning shot that help the team qualify for the national finals in Las Vegas Oct. 20 through Oct. 28. 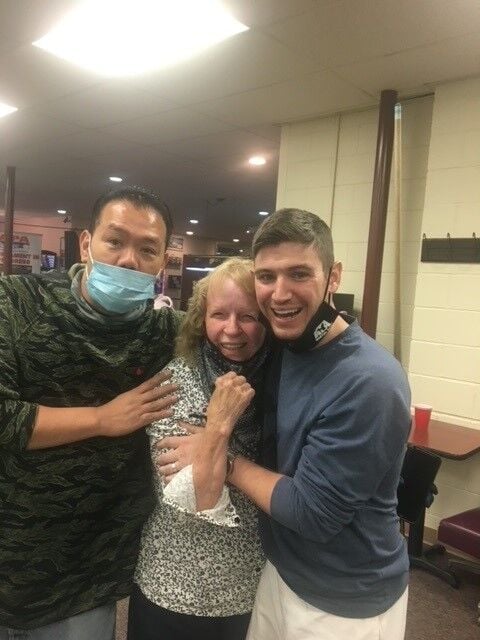 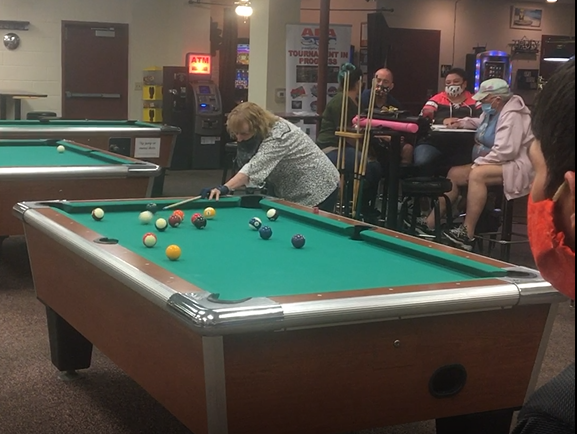 Jan Kiepke takes a shot in 8-ball en route to winning her match that helped propel her team, the Hustlers, to the APA national finals (top). Jan Kiepke’s teammates Brandon Sipe (right) and Randy Baker celebrate her winning shot that help the team qualify for the national finals in Las Vegas Oct. 20 through Oct. 28.

DALLAS — Among the pantheon of billiard greats sit such luminaries as Rudolf Wanderone (aka. Minnesota Fats) and Willie Mosconi. Joining them from the fairer sex are such women’s greats Janette Lee and Jennifer Barretta.

Not just anyone can secure the winning shot to propel their team to the American Poolplayers Association national championships. Fewer still can do it at the young-at-heart age of 89.

“I had been playing pretty good that night. The last ball went right in for me and I won,” Kiepke recalled.

Her team, The Hustlers, compete Monday nights in an 8-ball league at Jake’s Bar and Grill in Salem. Not only is she the team’s only woman player, she also throws off the team’s bell curve for average age. Team captain Brandon Sipe, 32, said take Jan’s age out of the equation and the team average between 35-40-years old.

“She has kind of become the gem of the team,” he said.

Sipe, who joined the team about three years ago, used to be the young buck amongst seasoned players. Then as team members transitioned on and off the roster, the seasoned vets gave way to more youthful players. But Jan and her husband, Don, remained the constant.

Sipe said when he took over captain duties and the league started back up during the pandemic, the Kiepkes actually made him laugh asking, “Since it’s your team, can we stay on with you?”

Two years later, they qualified for their first-ever trip to nationals in Las Vegas.

Again, the team relied heavily on the Kiepkes’ skills getting The Hustlers through the skill weighted point system. Sipe explained more skilled players had to win more matches when up against a lesser opponent.

Kiepke said her strength was in finesse.

But she’s good at the finesse shot to see who shoots first.

“Her strength is talkin’,” Kiepke’s daughter Rhonda Hardan said recalling something the team captain once told her. “‘Jan, we know you can shoot ‘em, because we’ve watched you shoot the ball, and we are left wondering, how’d you do that?’”

Kiepke said when living in Newport decades ago, a ship came into port stocked with cargo for the local auction. A hand-crafted pool cue caught her eye. Knowing quality, she won the bid at $240. She still uses it to this day.

Hardan said her mom was one of the first female employees to work at Georgia Pacific Pulp and Paper Mill in Toledo, Oregon, where she worked for 25 years.

A single mom back then, Hardan said she always made time to play pool. Back then, the men and women each had their own separate leagues.

“That was her one passion to enjoy,” Hardan said.

She added her mother’s fearless streak expanded to the racetrack, where she once drove in a stock car race.

“That was fun,” Kiepke said, chuckling.

Kiepke added there’s a race from Tijuana to the Canadian border that she’s always wanted to participate.

“I’ve always wanted to drive in that,” she said.

“If we let her, she probably still would,” her daughter added.

Both Kiepkes were on the team when The Hustlers qualified for nationals last year. The finals were postponed for a year due to the pandemic. Since, Ron passed away in July, leaving their team with seven members. Sipe said that hasn’t changed the team dynamic.

“We have great team chemistry,” he said. “We never expected to go as far as we did. We’re going to win some games. So, we’ll see have far we can go.”

He expects to be up against 300 to 400 other teams from around the country. Their goal is to get in the money, which goes to a certain amount of top teams, depending upon the number of entrants.

Meanwhile, Kiepke can’t wait to get back to practicing in her garage. Since Ron’s passing, the family has been planning an estate sale and place many of the items to for sale on top of their pool table. Also taking up space on shelves on garage walls are many of the 39 trophies she and Ron won over the years. She credits about half of the trophies to Ron’s wins.

Looking forward to her second trip to the national finals Oct. 20-26, Kiepke had a simple prediction for how well The Hustlers will do.

“Win,” she said. “Of course, everybody always ‘wins’ when they go to Vegas.”