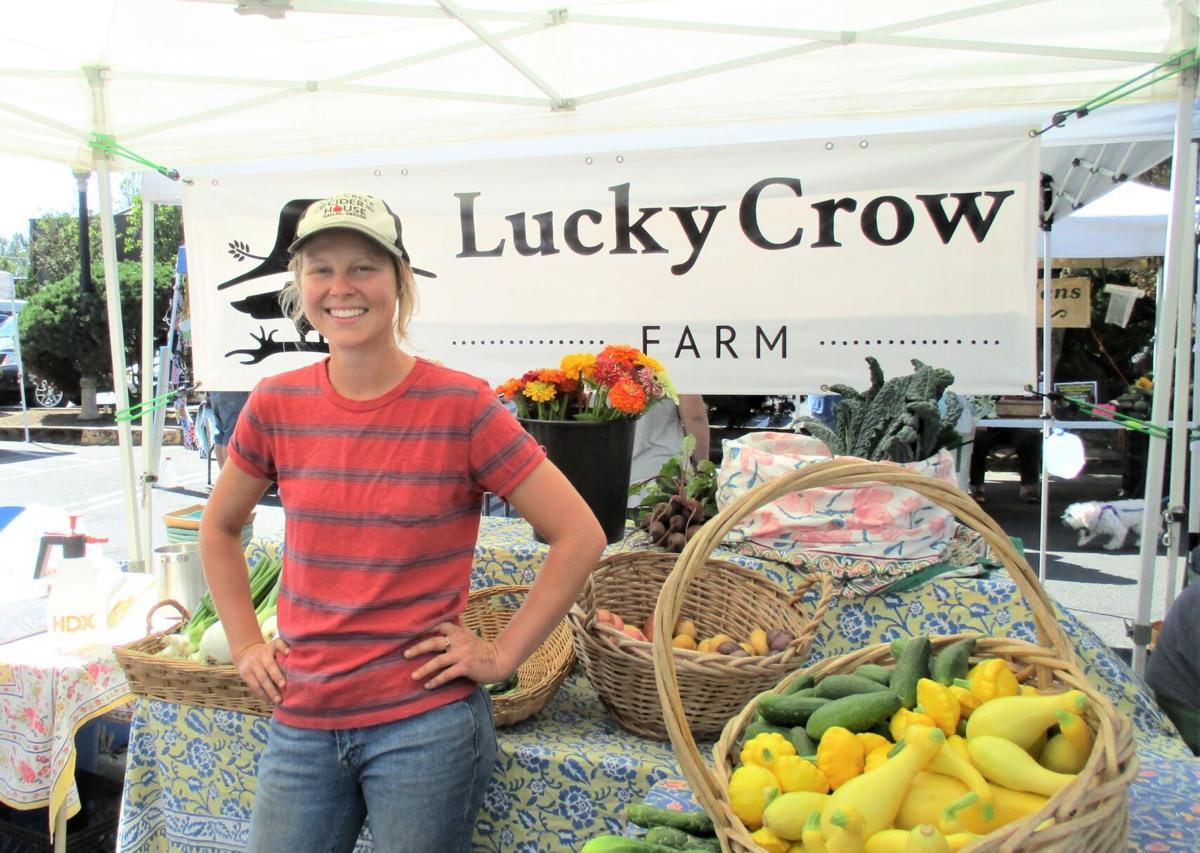 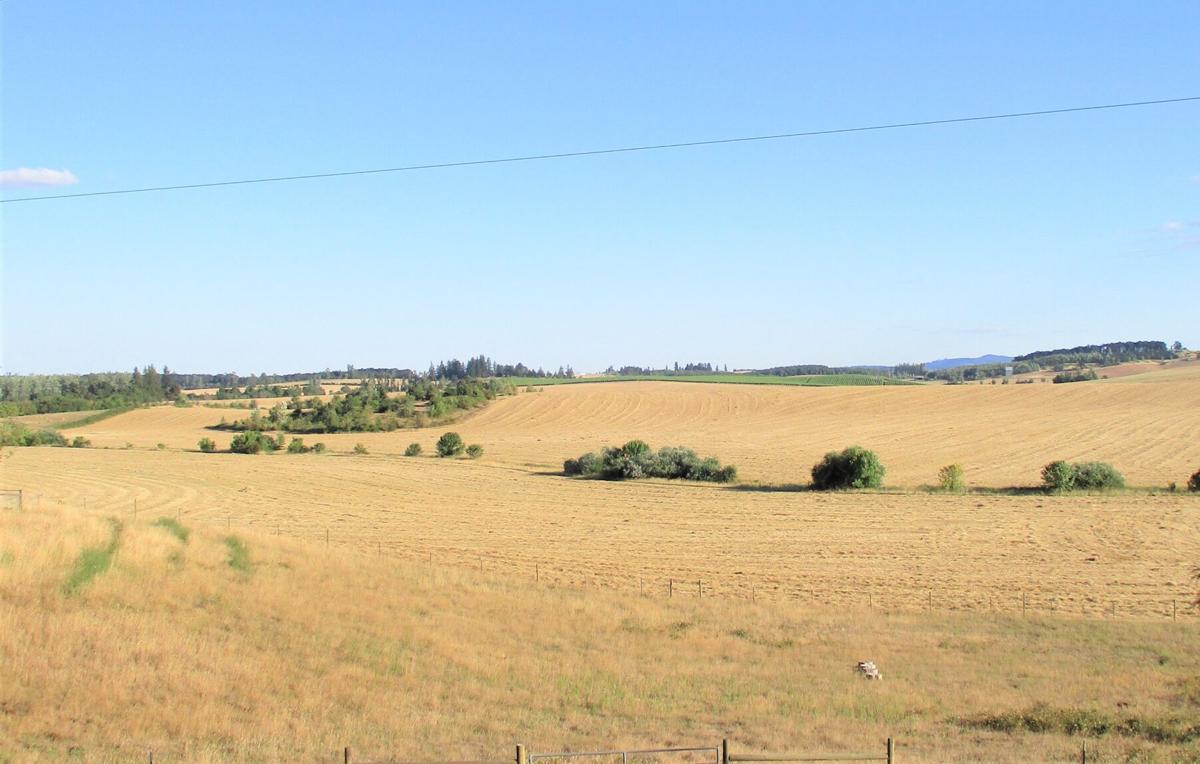 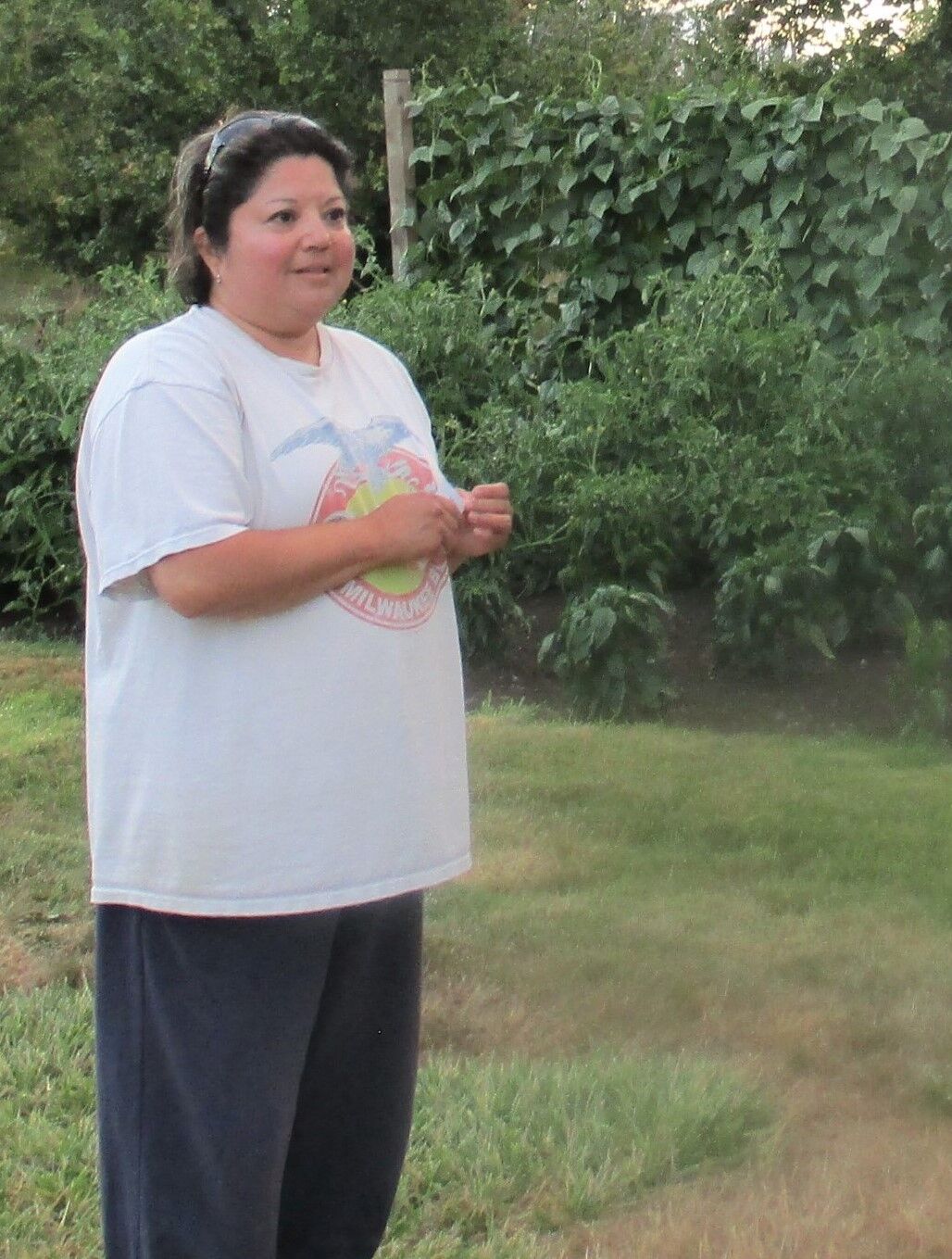 Christina Cheek grows food on a farm outside of Independence to help feed her family. 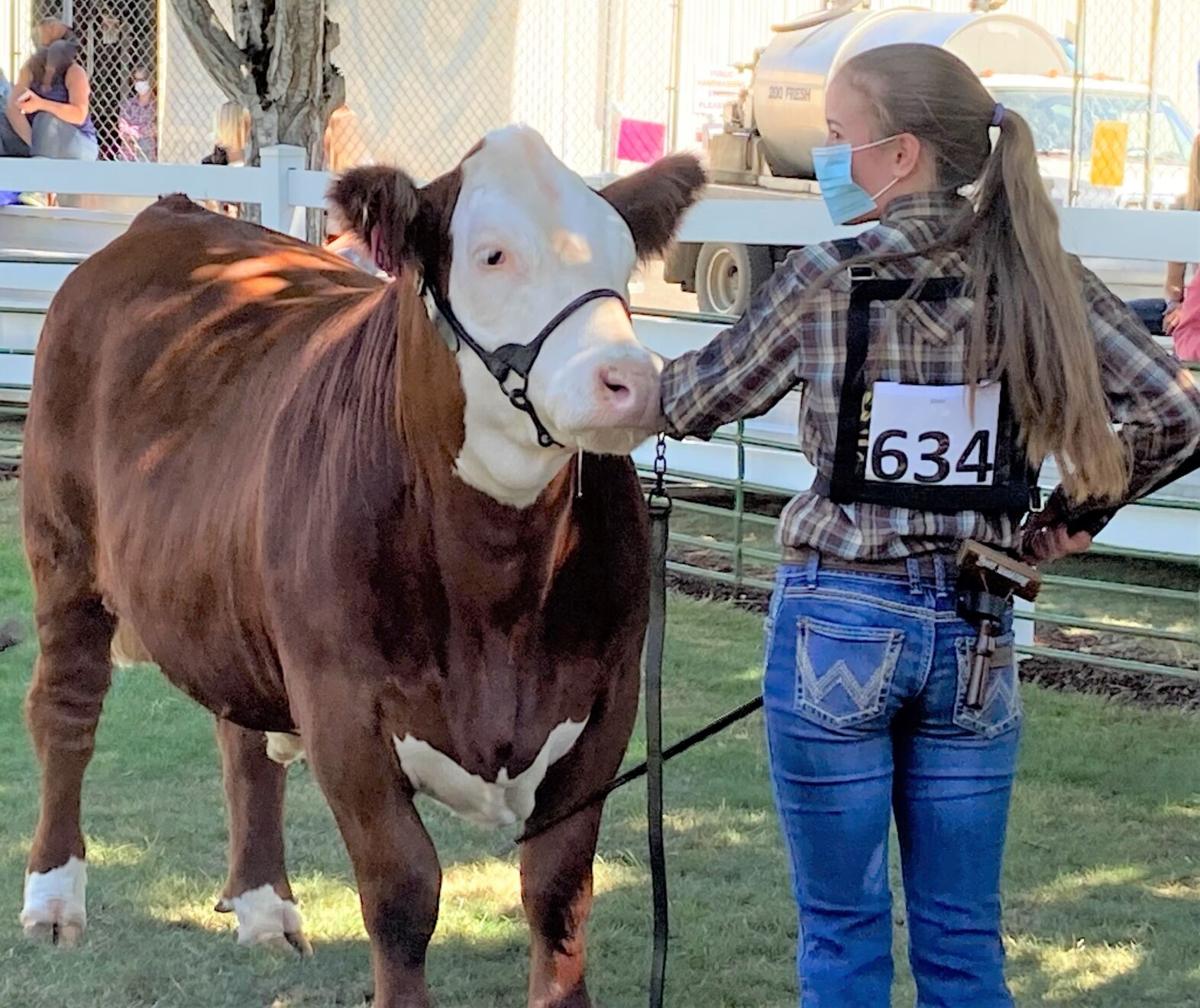 Faith Fitts, one of three children growing up on a farm operated by her parents, shows her cow.

Christina Cheek grows food on a farm outside of Independence to help feed her family.

Faith Fitts, one of three children growing up on a farm operated by her parents, shows her cow.

INDEPENDENCE — They live on a thriving farm on the outskirts of town, but you might consider Joe and Abby Fitts remarkable for other reasons. The pair juggles demanding professional lives, too — he’s an accountant, she’s a lawyer — and they make it look as routine as Oregon rain. Or maybe you’d see them as exceptional in another way — both forged successful military careers in early adulthood. It’s also likely you’d regard them as special for the family they’ve built with their three children.

As striking as these accomplishments seem, what may be most distinctive about this couple is their model of farming, which provides an example of how ties to multigenerational land are being sustained and maintained. If current agricultural business trends are a reliable guide, it could prove a wave of the future, and perhaps one way of helping to preserve family farms.

Joe Fitts returned to Independence more than a decade ago, to the very place where he’d grown up. However, his full-time farming ended only a few years later, when he became a certified public accountant. Along with his wife Abby the two now seem representative of today’s emerging farm family.

In Oregon, most individual land ownership is associated with family farming, but without farmers like the Fitts family, that picture will gradually change. Eventually, more ownership by corporations and investors is likely, according to a recent investigation by Megan Horst, associate professor of urban studies and planning at Portland State University (PSU).

Though corporate take-overs have grabbed news coverage and are attributed to the decline of family farming, the story is more complicated than that. Often, family farms remain in the agricultural pipeline by being leased by other, much larger operations, sometimes neighboring landowners. This is what also has occurred with the Fitts farm.

In the next five years, nearly a fifth of all family farms are predicted to lose their main “operators” for age-related reasons. In fact, 17% of those who currently head family farms plan to retire by 2025, according to the US Department of Agriculture’s (USDA’s) Economic Research Services.

And, across Oregon, sole operators of farmland no longer dominate. Less than 45% of family farms now have one operator, compared with about half that now have two, and another seven percent include a third, according to Oregon State University’s (OSU’s) most recent report from the Center for Small Farms and Community Food Systems.

Five years ago, PSU and OSU teamed up with Rogue Farm Corps to take an in-depth look at Oregon family farming, and the researchers concluded by sounding a note of alarm that nearly two-thirds of Oregon’s agricultural land will pass to new owners over the next two decades.

“How that land changes hands, who acquires it, and what they do with the land will impact Oregon for generations,” the authors warned.

Ensuring a healthy future for Polk County’s agricultural land is a top priority for the county’s board of commissioners. When asked how they would rank the importance of family farms, all three — Craig Pope, Lyle Mordhorst, and former commissioner Mike Ainsworth — said they consider local agriculture a significant economic force and an integral part of the county’s identity.

There’s been a “steady shift” of production to much larger operations, said economist James MacDonald, visiting research professor at the University of Maryland in College Park, who has written extensively on family farm operations.

“We grapple with this,” said Fitts, who is the oldest of four brothers. Leasing land seemed a suitable option, he said.

“That, of course, is quite common,” concurred MacDonald, noting land-leasing is a solution for many farm families. Asked whether outside income from off-farm work is becoming the norm, too, MacDonald stated: “I don’t know of any evidence of a growing trend of people continuing to farm the family’s land while pursuing primary off-farm occupations, although I’m sure it happens.”

The indication that outside income-earning is on the upswing comes mostly from work-related studies, not farm surveys. By 2016, about half of all farm families were shown to be insured through outside employment, according to the Agricultural & Applied Economics Association, an organization that tracks agrarian statistics nationwide. A more recent study, reported in the journal Rural Policies and Employment in 2019, documented that most small farmers now earn some of their income off the farm, while doing double-duty growing crops, livestock, or both. The exception: Older farmers, who clock far fewer hours in outside jobs, according to the USDA.

There are other growing approaches for delivering revenue to family farms: Paid hunting tours on farmland, admission fees for farm-sited fishing and boating spots, wine-tasting venues and overnight farm stays with recreational offerings like hayrides. These grew by 51% between 2012 and 2017, according to the latest Oregon Farm and Land Use Report.

But, despite a way of life that’s undergone a sea change since his youth, Fitts considers the family farm an excellent way to raise children. “The biggest thing that farming taught me as a young person was, if you don’t do something you need to do, it just won’t get done,” Fitts said.

An alum of Central High School, Fitts joined the military after graduation in 1994. He thinks it’s his early farming experience that created the path to a well-balanced life. Like the armed services, a farm teaches “you about accountability, about reliability,” he said.

It’s a lesson that’s being passed on to his three children. The romantic notion of farming — getting close exposure to nature, getting exercise that confers a sense of accomplishment, too -- is all true, he said. But perhaps that really isn’t the most important aspect, he pointed out. His children have learned “there are lives in the barn that depend on them,” he said.

“Not only that, but with animals, there are tangible results that you can see from their good care,” he added.

All three of his children seem to have avoided some of the “temptations” of today’s youth, such as spending excessive time on computer screens for video games or for social interaction, he said.

Fitts recalled that, when his son was in middle school, he went through an intense “X-box phase” that eventually he seemed to naturally outgrow. Farm-related activities, such as participation in 4-H, led to an early maturity and “it was no longer his go-to recreation,” Fitts recalled.

Fitts is far from the only advocate for a life that’s rich in the kind of rewards that cannot always be measured in a profit margin. Even as the drought runs on, local farmers roll into Independence every Saturday, cheerfully calling out to each other as they set up their produce stands.

It’s hard work to be a vendor there, observed Marti Sohn, whose property, T.D.M. Acres in West Salem, includes fruit trees and herbs. But, for small farmers, the open-air marketplace is the best means of directly connecting with the community, she said.

“The social part is so important,” Sohn stressed.

The visibility of this farmer-to-buyer selling is essential, too, said Carol Park, whose logo of Black Cloud Farm LLC — a trio of dark clouds floating at the center of a captain’s wheel — is now a well-known symbol of the farm, which is located west of Independence.

The farmers market also imparts a sense of helping fulfill nature’s cycle, said Eden Olsen of Lucky Crow Farm, east of Highway 99W in Monmouth. It’s exhilarating “being able to see the crop start, then grow, then end up in someone’s hands right here,” she said.

Over the past 18 months, as the pandemic persisted, the number of farms selling directly to consumers actually increased, noted Audrey Comerford, agritourism coordinator for the small farms program at OSU’s College of Agricultural Sciences. Some farms that hadn’t done so before started offering community-supported agricultural (CSA) shares; Others added extra CSA shares to their existing ones, she said. Many farms reported that their sales at farmers’ markets were on track or better than in previous years, even as COVID raged on.

“That is not to say this was the case across the board but, overall, our area did see this trend,” Comerford said.

Why the surge? Local customers “knew they could get their locally grown and produced products at the markets in a safe and reliable way, even when the grocery stores had a hard time keeping items in stock,” she said.

Not everyone wants to sell what they’ve grown — some want to feed their family with fresh produce, straight from the field or garden. And they also want to can it, pickle it, freeze it or preserve it for use all year long. One of them is Christina Cheek.

Cheek lives on land next to other family members, just off Highway 51 near Independence. Her harvest may not be as large as theirs, but it comes loaded with memories and filled with history. From the trees in the orchard where she and her husband walk in the shade to the gathering of blueberries that their children eat while picking, the place is far more than the ground where a gang of voles currently has dug worrisome holes. It’s a wonderfully different kind of home “where you can feed your family from what you grow where you live,” she said.

Knock Expands to Portland, Ore., Giving Homeowners the Power to Make a Non-Contingent Offer on Their New Home Before Listing

'I was enraged': Partner of fallen officer reacts to Trump's comments about Jan. 6