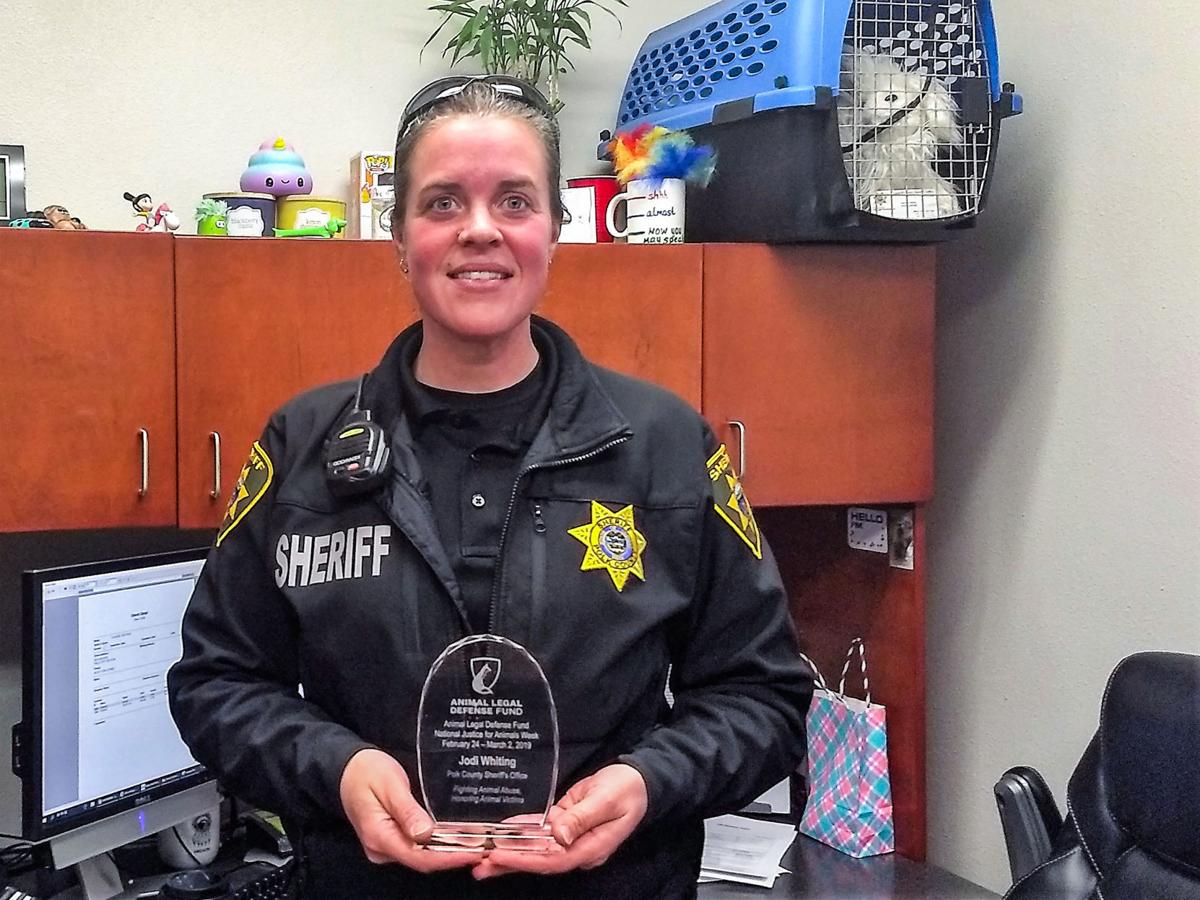 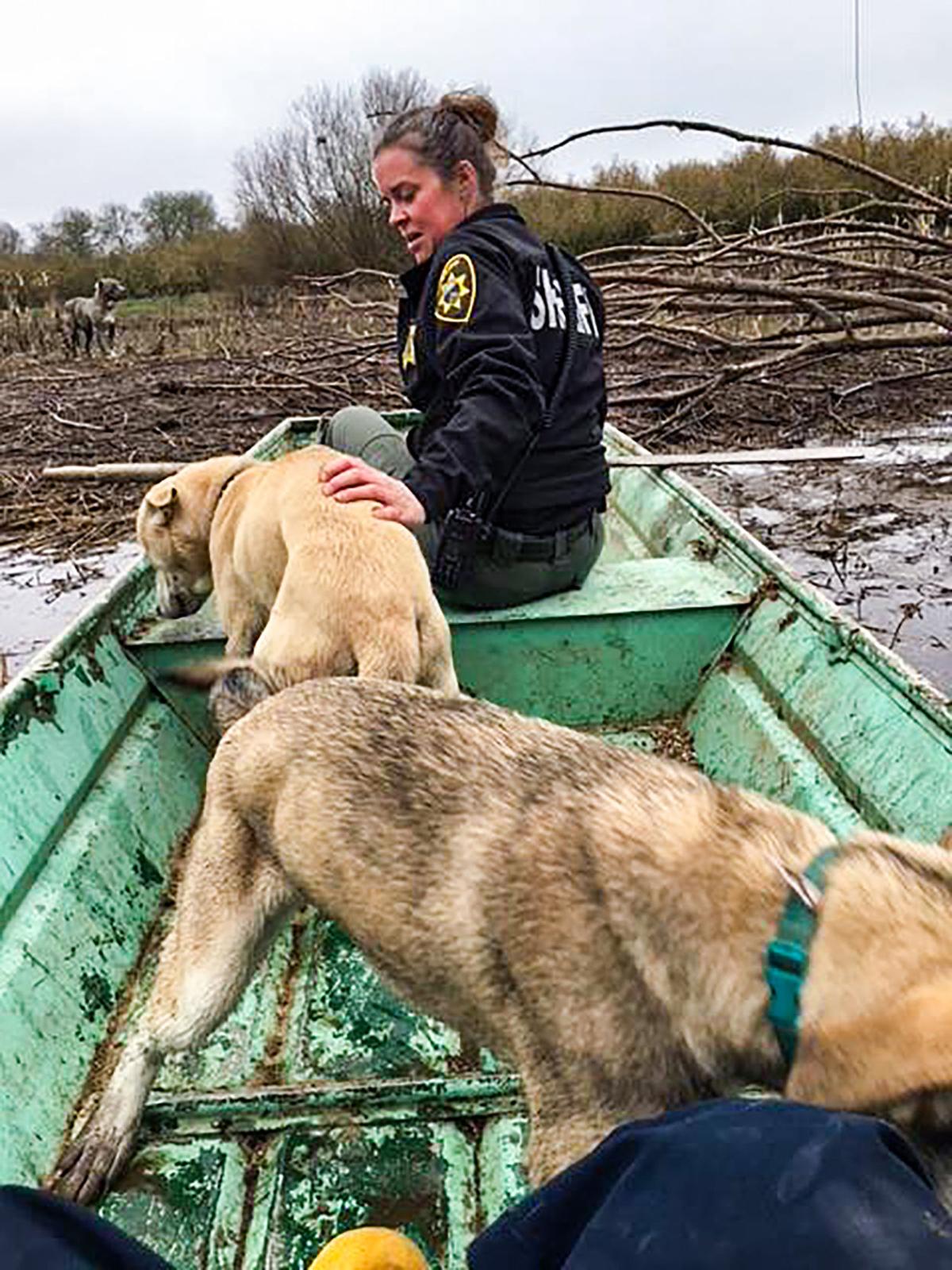 POLK COUNTY — Jodi Whiting still loves the job she got by “happenstance” about 15 years ago.

“The position itself has given me so much education,” Whiting said. “I’m forever grateful. It’s a decision I made on a whim and I am so grateful.”

Whiting, now with the Polk county Sheriff's Office, was recognized last month for her dedication.

The Animal Legal Defense Fund named Whiting as one of its Top Ten Animal Defenders of 2019. A distinction earned by a career dedicated to helping animals and investigating animal cruelty cases, according to ALDF.

Her involvement with animals has been lifelong, she said.

“I’ve always had a plethora of animals,” Whiting said.

She’s learned how to say “no,” but she’s had “four or five horses at one time, along with a handful of goats and a llama, a pig and poultry.”

That was too much, she said, but that experience helps her to have empathy for community members who find themselves in similar situations.

Now she has one horse, two goats, a llama, two dogs and a cat.

“And I am proud that that is much smaller,” she laughed.

People want to help, and take pride in trying to care for many animals, she said.

Zoning ordinances determine how many and what kind of animals someone can have on a property.

Even when someone is allowed to have the animals, they sometimes need help learning how to properly care for them.

“Once you’re there you realize, it’s a bit much,” Whiting said. “There’s a fairly good chance that I’ve been in the same position. So how do I get people to resolve things or find what is manageable for them?”

Whiting sometimes helps animal owners by connecting them with services such as veterinarians, rescue organizations or organizations that build fences at no charge.

She responds to a variety of animal-related calls, but most commonly to welfare checks.

“I appreciate (that) because people don’t necessarily know what they’re seeing when they’re passing by quickly, but those things can lead to so many other contacts and resources,” Whiting said. “Maybe that isn’t the reason we’re called out there. Maybe they have a question that leads to another problem we can fix while we’re there.”

She’s had instances where a welfare check for one animal leads to helping out with another animal or wildlife.

“It’s like Pandora’s box,” Whiting said. “It’s good though because I wouldn’t have the knowledge I have now if I hadn’t been asked the questions ... and had to do the research and figure out myself the best ways to fix things.”

Though it’s been more than 15 years, there’s still much left to learn, she said.

One of the most unusual calls came last February.

Three dogs were on an island that had flooded in Buena Vista, Whiting said.

“You would not have been able to find it,” Whiting said. “The person that had the neighboring property had one of those all-terrain vehicles. He gave me step-by-step instructions to get there and at the back of the property, there’s an old wooden rowboat.”

They went out to the island, got the dogs on board and rowed back.

“They were just scared. We don’t know how long they’d been out there.”

The dogs’ owners were never found but they all got adopted, Whiting said.

Regardless of the season, animal control is busy, she said.

During the Fourth of July, dogs get afraid and run. At Halloween, PCSO gets more calls for dog bites because some dogs are not used to strangers knocking at the door.

“When the seasons change from fall to winter, we start see more livestock calls,” Whiting said. “Natural hunting instincts for dogs is to stalk. Huskies are notorious for de-feathering chickens.

I generally know that if I get a naked chicken call, there’s probably a Husky out there with some feathers somewhere.”

“It’s not glamorous, that’s for sure,” she laughed.

“I was only looking to fill spare time and participate with my animals,” Whiting said. “That’s the whole reason that I got involved with the posse — how can I give back to the community and still enjoy my animals and fill up all this free time and man, it was life-changing.”

For animal-related questions or concerns, contact Whiting at whiting.jodi@co.polk.or.us or 503-623-9251.

Owners get more time to rebuild after 2020 Labor Day wildfires