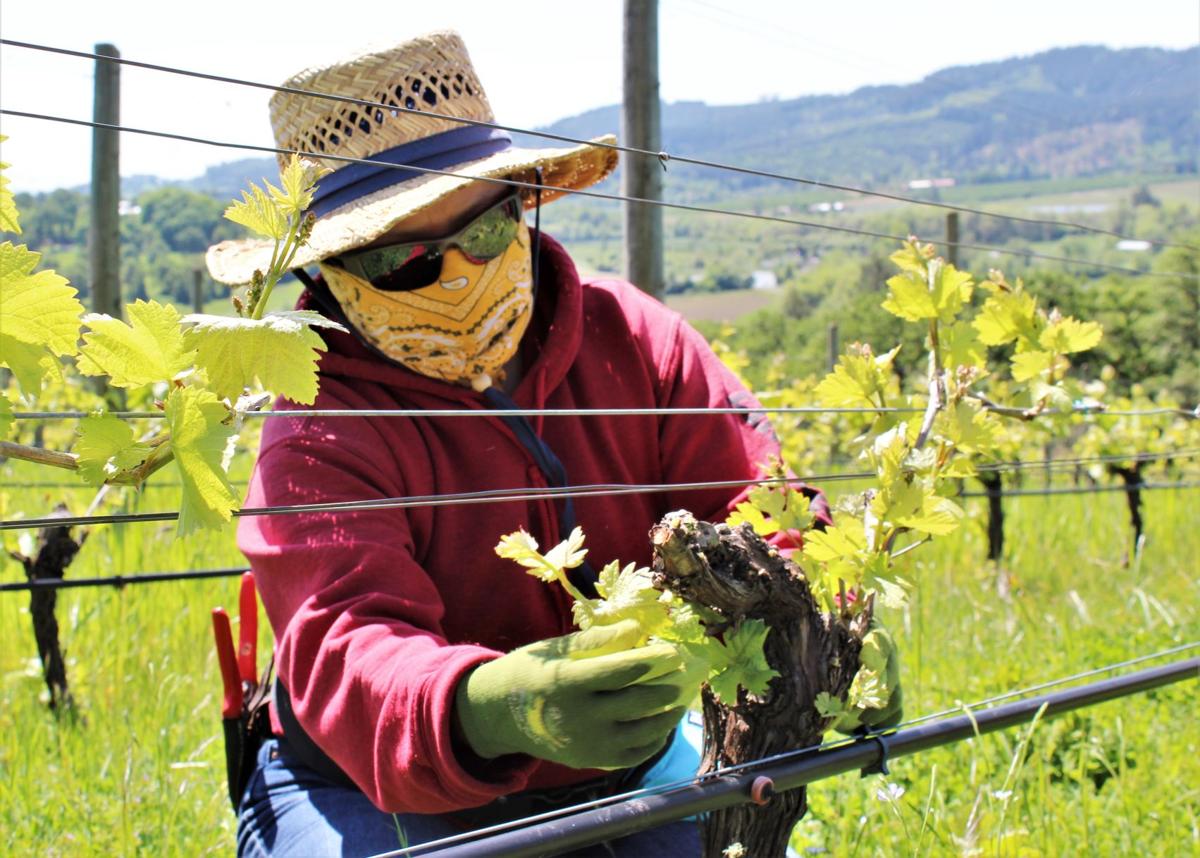 Oralia Moroto thins shoots at Tidalstar Vineyard on May 7. 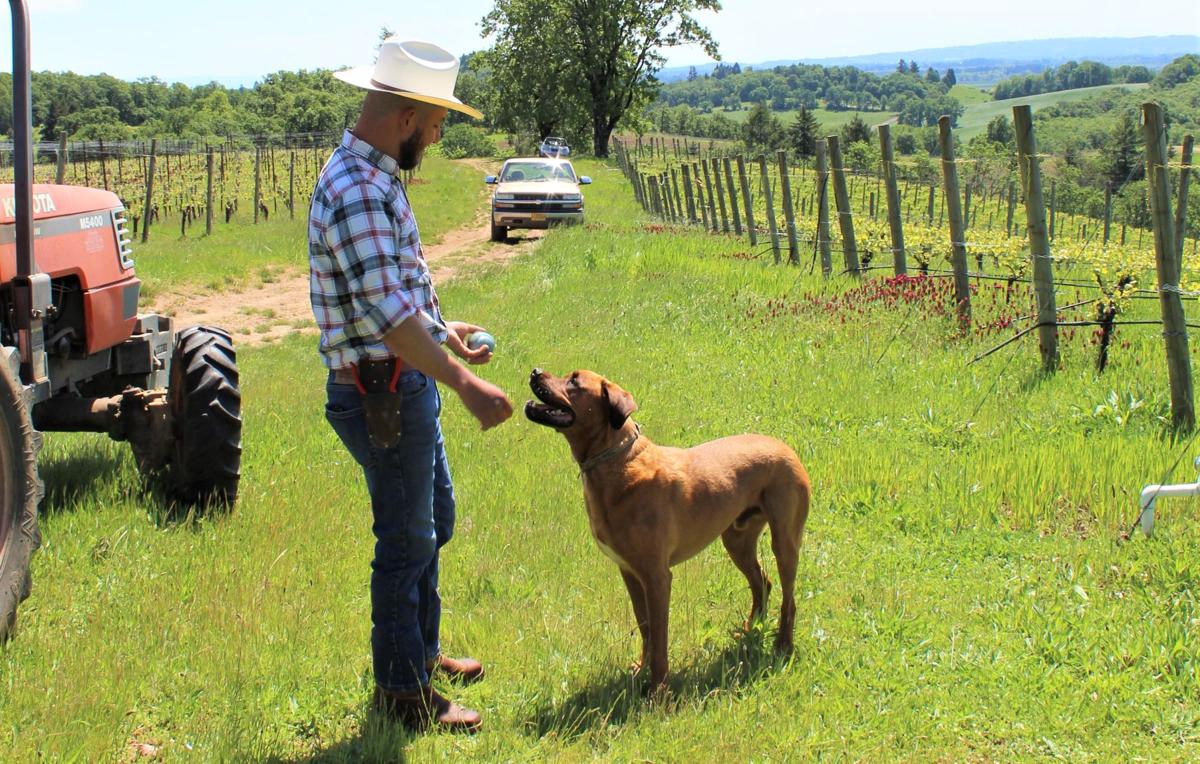 Alejandro Avalos Corona gets ready to throw the ball for Walker. 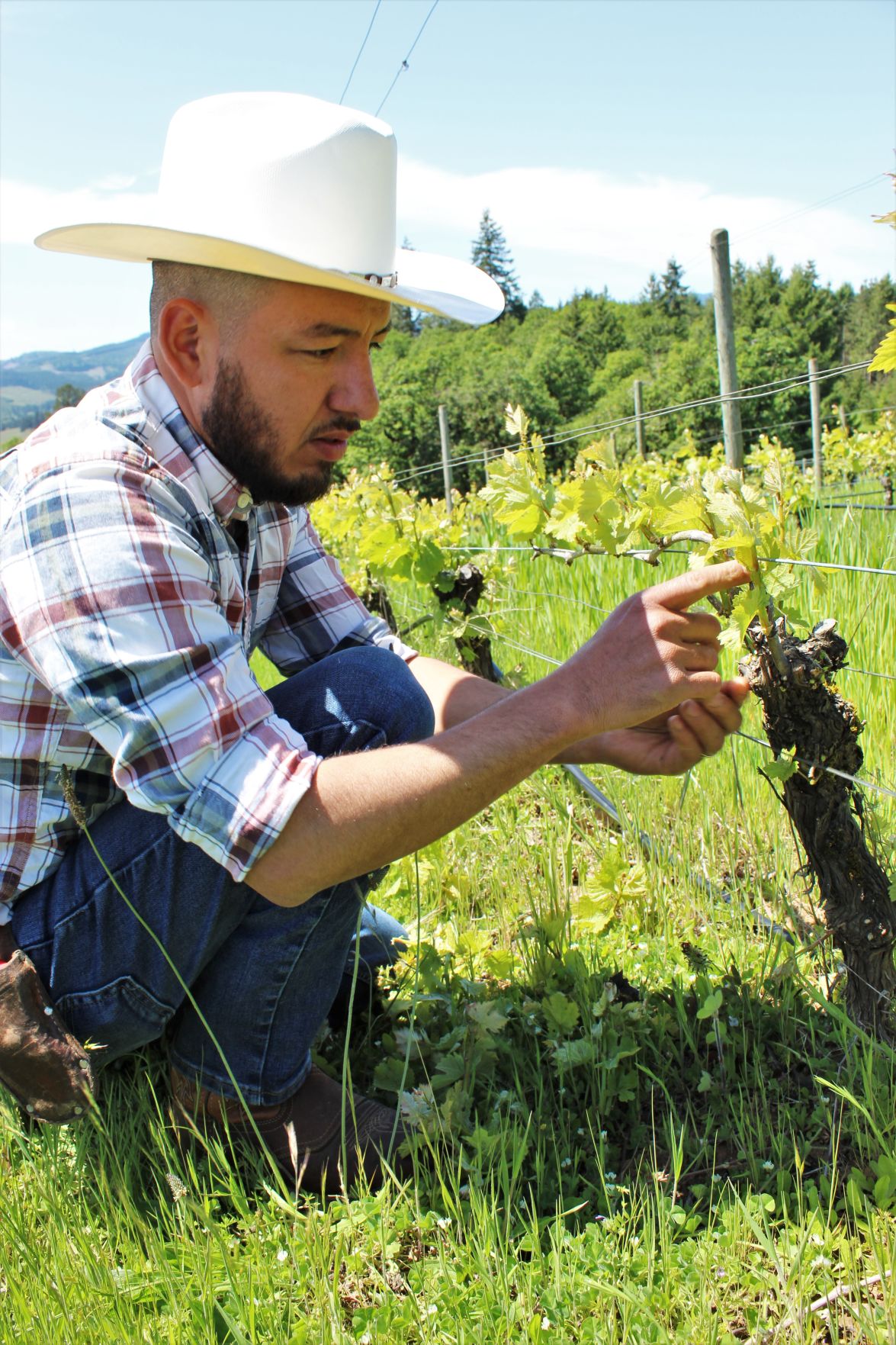 Oralia Moroto thins shoots at Tidalstar Vineyard on May 7.

Alejandro Avalos Corona gets ready to throw the ball for Walker.

POLK COUNTY — A new program aims to help people learn about the wine industry from the vineyard to the tasting room.

In English, ahivoy means “there I go.”

At 48 years old, co-founder Sofia Torres-McKay said she feels the physical effects of the work.

“When you get older you cannot perform the jobs you used to,” she said with a laugh. “When I go and work with them, I work maybe two hours and my back hurts so bad. That’s the job that makes me the happiest, but it’s hard work.”

The first group of 11 students started classes on Jan. 15.

Classes met on Wednesdays from 9 a.m. to 3 p.m. and students learned different aspects of the industry, including vineyard management, wine making and sales.

Adrian Mendoza started working in the industry 12 years ago.

“One of my uncles is a contractor,” Mendoza said. “I was working in the vineyards running crews for him. I worked up from being a vineyard supervisor to vineyard manager – overseeing seven different vineyards.”

“I just wanted to get info to send my employees there,” Mendoza said.

He and a co-worker enrolled.

“I want to continue to learn, to get an education, just learn about the vines in general,” he said.

He said learning about wine making has been interesting.

“No two wines are ever the same,” Mendoza said.

He’s learned to identify different tastes and even smells in the wine, he said.

“For now, I just want to finish the Chemeketa program and then see what happens,” Mendoza said. “In the long run, it’s hard to say, do I want to have my own bottled wine? Own a vineyard? I don’t know.”

He’s been in the industry for about eight years.

“It started as a summer job,” Corona said.

He worked for his father, who was a florist, for 12 years.

“Every summer I would look for a job to keep myself busy and my uncle was working at Montinore, where I currently work right now,” Corona said. “It started as a summer job working with the hand crew out in the vineyard doing shoot thinning. From there, I started driving the tractor.”

Now Corona is a vineyard supervisor.

Corona heard about the AHIVOY program through a friend he met during harvesting.

“We’re learning a lot about the components in the wine,” he said. “How wine is made. How it’s not supposed to be made.”

It’s changed the way he does his work, he said.

He’s learned not only from the instructors and field trips to wineries, but also from classmates.

“It’s a team effort. Everybody works hard to grow and make the best wine possible,” Mendoza said. “I think everybody should continue to grow forever in this industry.”

Torres-McKay said they had to create this pathway to get that opportunity.

“We all deserve a career and to move ahead in whatever industry we work,” said Torres-McKay.

The courses are English-immersion to help students feel comfortable with their English language skills and with communicating with people throughout the industry.

Being bilingual is key, Torres-McKay said.

The class met for nine of the 10 weeks, before things were shut down by the coronavirus pandemic.

The final week of the first term was going to consist of a “little graduation” and speakers from the industry, Torres-McKay said.

That has been postponed until January, she said.

The panel of speakers have dealt with the same issues the students have, she said - “the same culture shock, money barriers, language barriers.”

The 11 students from the first term will start their second 10-week term in January. AHIVOY also hopes to 10 to 15 students to start the next class.

Part of the outcome of AHIVOY’s outreach is to create more diverse representation at all levels in the wine industry.

Torres-McKay hopes to add to that diversity by having some women join in the next class. The first group is all men.

Students are able to attend with minimal costs — $300 total — because of scholarships.

AHIVOY’s main fundraiser, a golf tournament scheduled for July, was canceled because of the pandemic.

A new event that will allow for physical distancing is in the works. This story will be updated online when that information becomes available.

June 6 is the anniversary of WWII's D-Day invasion

A look at ESPN's "LANCE"

Covid-19 cases may rise as protests in US continue