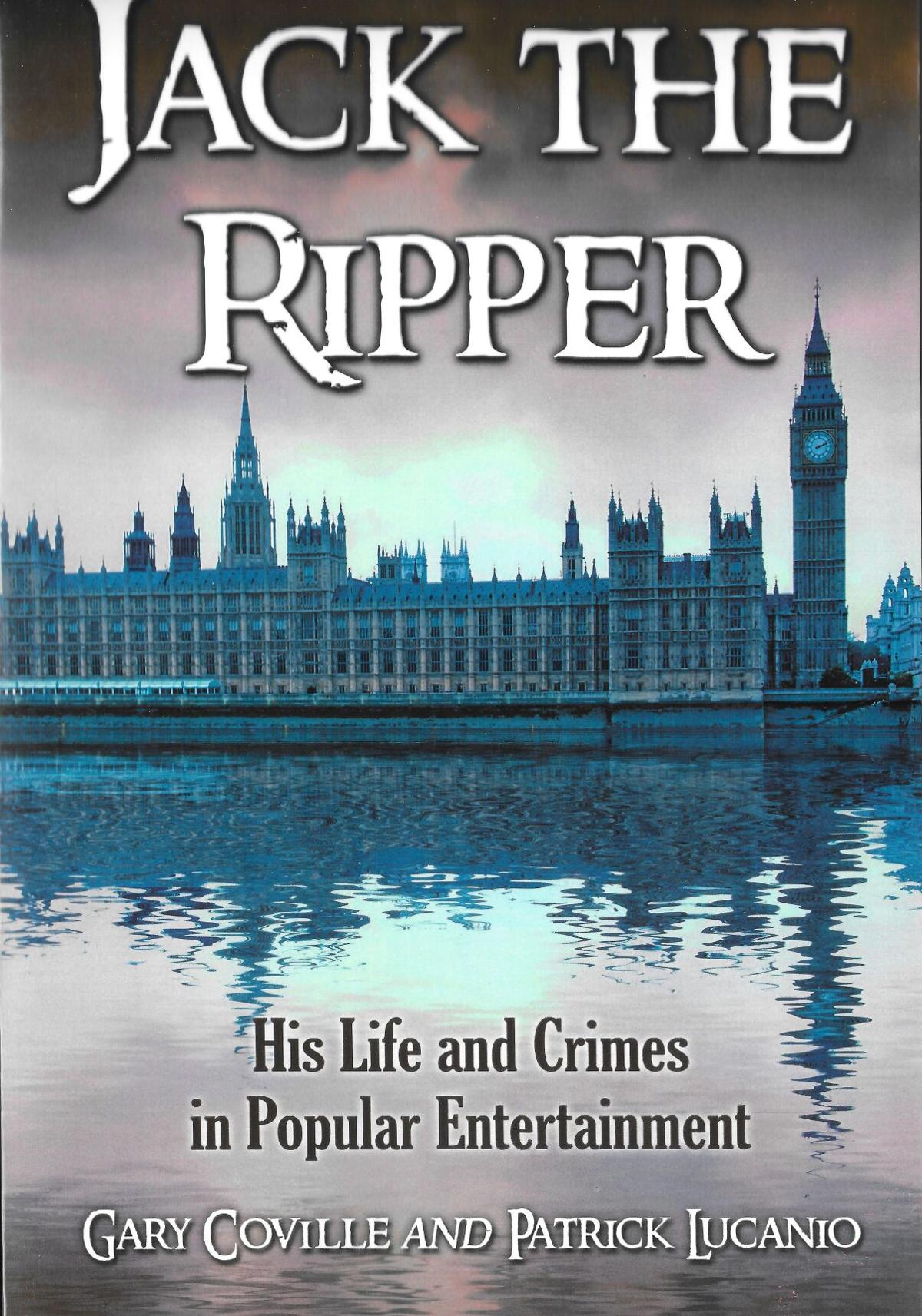 The cover of Gary Coville and Patrick Luciano’s 1999 book, “Jack the Ripper,” depicts the Houses of Parliament from London’s Westminster Bridge. Although the bridge and building are iconic, the Ripper actually committed his murders some four miles away in Whitechapel in the city’s East End. 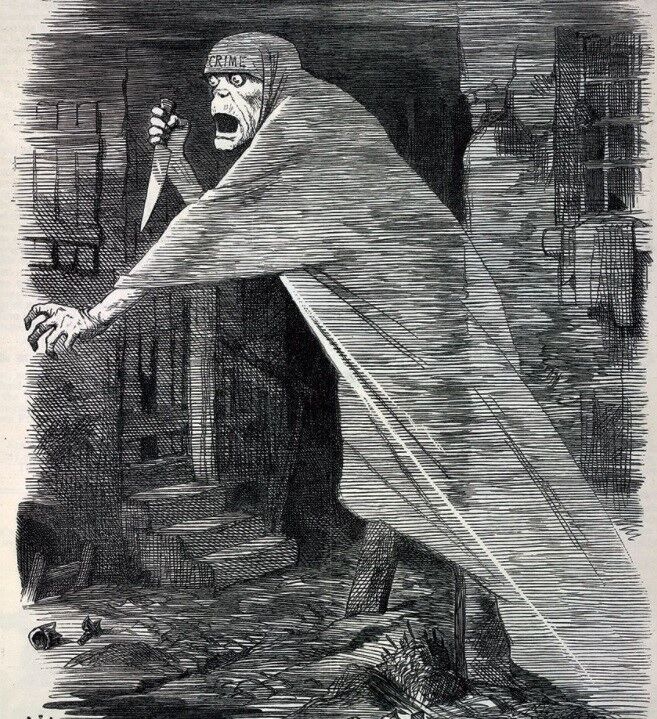 “The Nemesis of Neglect,” drawn by John Tenniel for Punch magazine in 1888, illustrates Victorian London’s fear surrounding violent crime during the year Jack the Ripper claimed his first victim in the city’s East End. 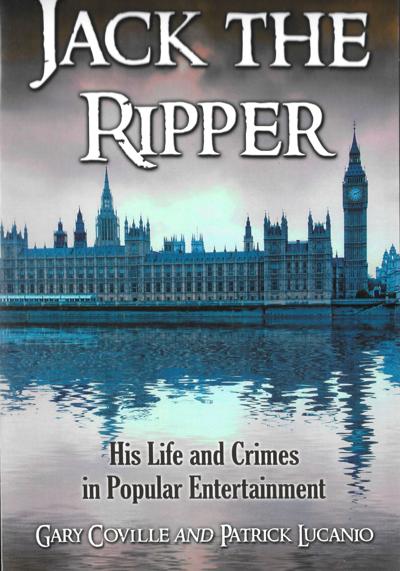 “Another murder of the foulest kind was committed in the neighborhood of Whitechapel in the early hours of yesterday morning, but by whom and with what motive is at present a complete mystery.”

Wells pursues the notorious serial killer, and when he catches up with him, he tells him they must return to the 19th century where he will face the consequences of his crimes. They don’t belong in the 20th century, Wells says.

The Ripper turns on a television and shows Wells how history and humanity has devolved.

“We don’t belong here?” he scoffs. “On the contrary, Herbert, I belong here completely and utterly. I’m home.”

That moment forms the essence of the 1979 movie “Time After Time.” There have been countless books, plays, movies and television dramas about Jack the Ripper since he killed and mutilated five women in London’s East End between 1888 and 1891.

However, that one scene, in that one movie, encapsulates the Ripper for authors Gary Coville and Patrick Lucanio.

Their 1999 book, “Jack the Ripper: His Life and Crimes in Popular Culture,” explores society’s fascination with the gruesome and macabre as exemplified by the Ripper’s continued stranglehold on the public imagination.

Coville, who retired as the reference librarian at the Dallas Public Library in 2004 after 28 years, said the book has only become more relevant since it was published in 1999. As the 21st century unfolds, he said, society and what it turns to for entertainment has become far gorier than anything Victorian minds could have conjured.

“When the Ripper was actually roaming the streets, his crimes were horrific and were truly considered horrific,” Coville said. “His crimes are now almost quaint with the level of violence we are exposed to every day.”

Yet people remain fascinated by the Ripper murders, especially this time of year when Halloween brings out people’s dark imaginings.

“It’s the idea that he’s this invisible killer, that he walked about, but he was never caught,” said Lucanio, who taught writing and literature for 17 years at Western Oregon University and also served for two years as the director of student media.

“In that way, he’s become a mythical figure,” he added. “He does very much become a gothic figure.”

Tales of the Ripper took a curious — and Lucanio said ultimately troubling — turn in the last 40 years or so. Time was when such stories focused on the mind of the killer, why he committed the murders, as well as attempts to stop him. They were the stuff of psychological thrillers.

Now they tend to be the stuff of unbridled butchery, Lucanio said.

He recalled watching the 1976 movie “Jack the Ripper” with German actor Klaus Kinski in the title role. “I couldn’t believe I was watching it,” Lucanio said. “It was a celebration of the Ripper’s crimes.”

One reason previous stories were less bloody is that movies, radio and television once faced all sorts of codes and restrictions, Coville said. Victims were bloodlessly stabbed or strangled. They were never mutilated. “The stories softened the Ripper,” he said.

Not that people of Victorian London were pure and innocent. They reveled in tales of the Ripper even while he was still at large -- with the help of the often lurid newspapers along London’s Fleet Street.

“The newspapers had a field day with the murders,” Lucanio said.

“They took what was an ordinary murderous thug and built him up,” Coville said. “People loved it. It was like being a kid reading a naughty book in his bed under the sheets.”

If that clashes with the prim and proper stereotype of Victorian sensibilities, Coville said it’s because people in the 21st century have a simplistic view of the era. The Victorians weren’t all that different from people today, he said.

“The Victorians were of two minds,” he said. “There was the straight-laced Victorian attitude toward business, civilization and culture, but we all in the back of our minds have this primordial streak.”

While other authors tried to probe the mind of the killer, Coville and Lucanio are more interested in the minds of the readers, listeners and viewers over the past 130 years.

“That was the main difference between the book we wrote and every other book written on the subject,” Coville said. “Rather than build a case around a suspect, what we wanted to do in the book was cover the fascination people have with the Ripper and explicate why people’s fascination continues.”

After more than a century, he added, the Ripper’s crimes say more about society than they do about the killer himself. “The Ripper over time has come to serve as our touchstone for society’s measure of and capacity for violence,” said Coville. “We measure ourselves against the Ripper.”

He and Lucanio also wanted to separate fact from fiction.

Film and television have given people a visual shorthand when it comes to Jack the Ripper, Coville said. “Throw in some fog and cobblestone streets, and you’re already half-way there in meeting up with the Ripper,” he said. “However, historians say there was never any fog when the Ripper was out.”

The historical Ripper is far removed from the monster created in the public mind. “He was really just this street thug who, for whatever reason, was murdering prostitutes in the East End of London,” said Coville. “We don’t know his identity, although we’ve pointed the finger in any number of directions over the years.”

Many so-called “Ripperologists” believe the killer was more than a thug. Suspects over the years included Prince Albert Victor, the grandson of Queen Victoria. “The candidates often come along to meet some political need,” Coville said. “During the time the finger was pointed at him, people were becoming suspicious of government and the monarchy.”

Coville and Lucanio, both pop culture buffs, struck upon the idea for the book while writing feature articles for FilmFacts magazine. After an article  about the Ripper, they found they had enough research for the book.

He grew up intrigued by chilling stories like the history of the Ripper, Coville said. “As a kid, it kind of scared the hell out of me, but I was fascinated by the stories and the mysteries behind them,” he said.

Two kinds of Ripper stories generally appear in fiction, he explained. One is a straight-forward imagining of the case with dramatic elements and characters thrown in. The other makes the Ripper a supernatural force, as in an episode of “Star Trek” where the spirit of the Ripper kills women on an alien planet while framing Scotty for his crimes.

Coville said it’s unlikely the true identity of the monster will ever be revealed. In the 21st century, as in the 19th, people don’t want to know the truth anyway. “People want the mystery,” he said.

“They don’t really want it solved,” he added. “If you solved the mystery, then people are done with it. They want to keep it going. If you boil it down to the simplest thing, we like to keep our monsters alive -- whether they’re real or not.”

Coville said there are terrifying monsters in the world. Only a few of them jump out from the corners of darkened streets. They’re everywhere and hide in plain sight. And they’re closer than we think.

“The world has caught up with me and surpassed me,” the Ripper tells H.G. Wells in the 1979 movie. “Ninety years ago, I was a freak. Today, I’m an amateur. You go back, Herbert. The future isn’t what you thought. It’s what I am. Do you know you can go into a shop here and purchase a rifle or a revolver? It’s perfectly legal, These people ...”

At this point, Wells can no longer take it. He lashes out violently at the Ripper.

These Trump supporters say big tech is biased. Here's why they're on Parler

Clinton: Al Gore had courage to say what I didn't want to hear