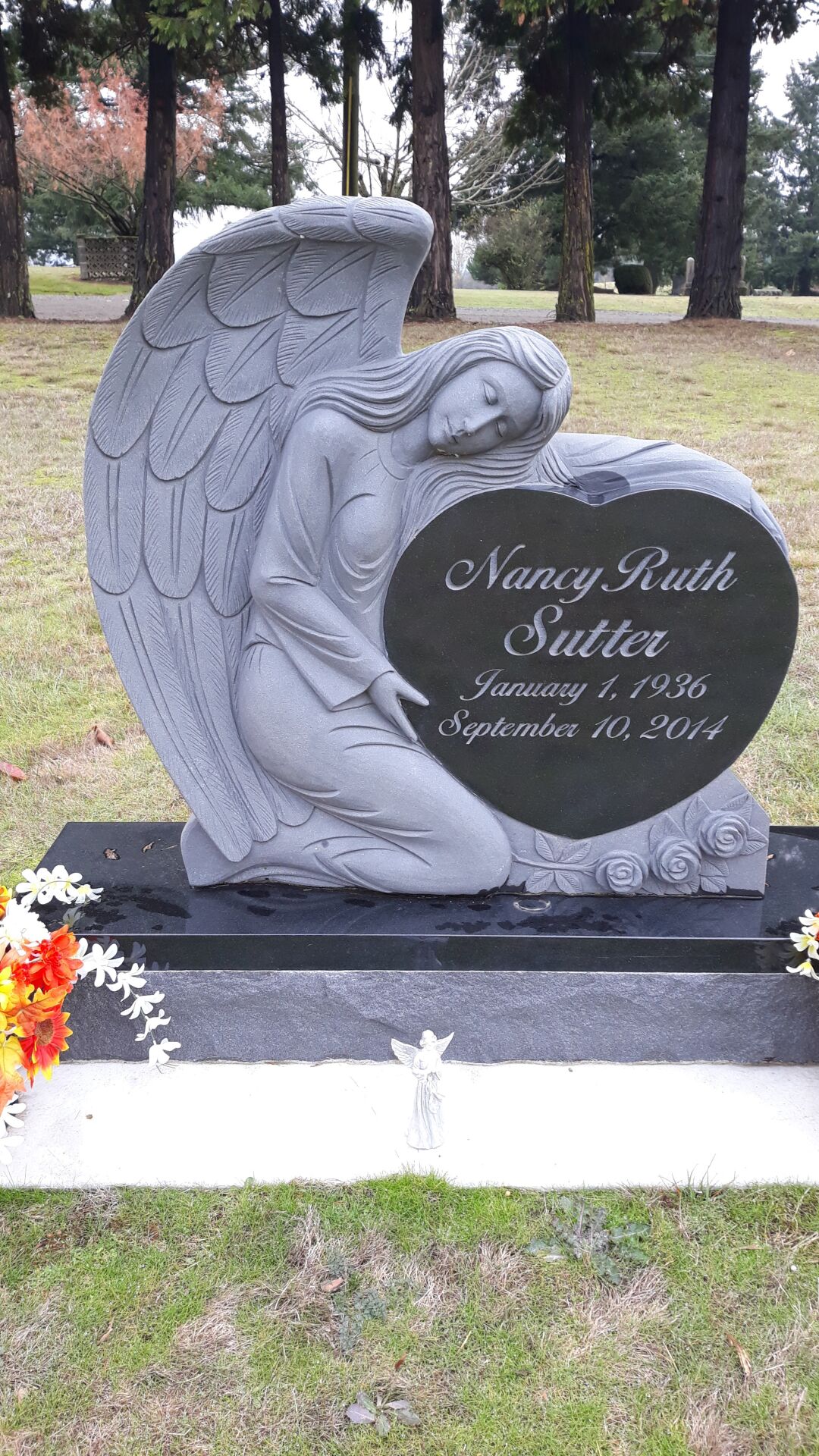 In contrast to the grim headstones of colonial America, modern markers (such as this lovingly angelic image for Nancy Ann Sutter at the Fir Crest Cemetery outside Monmouth) often feature comforting images that illustrate the departed in the hands of a loving God. 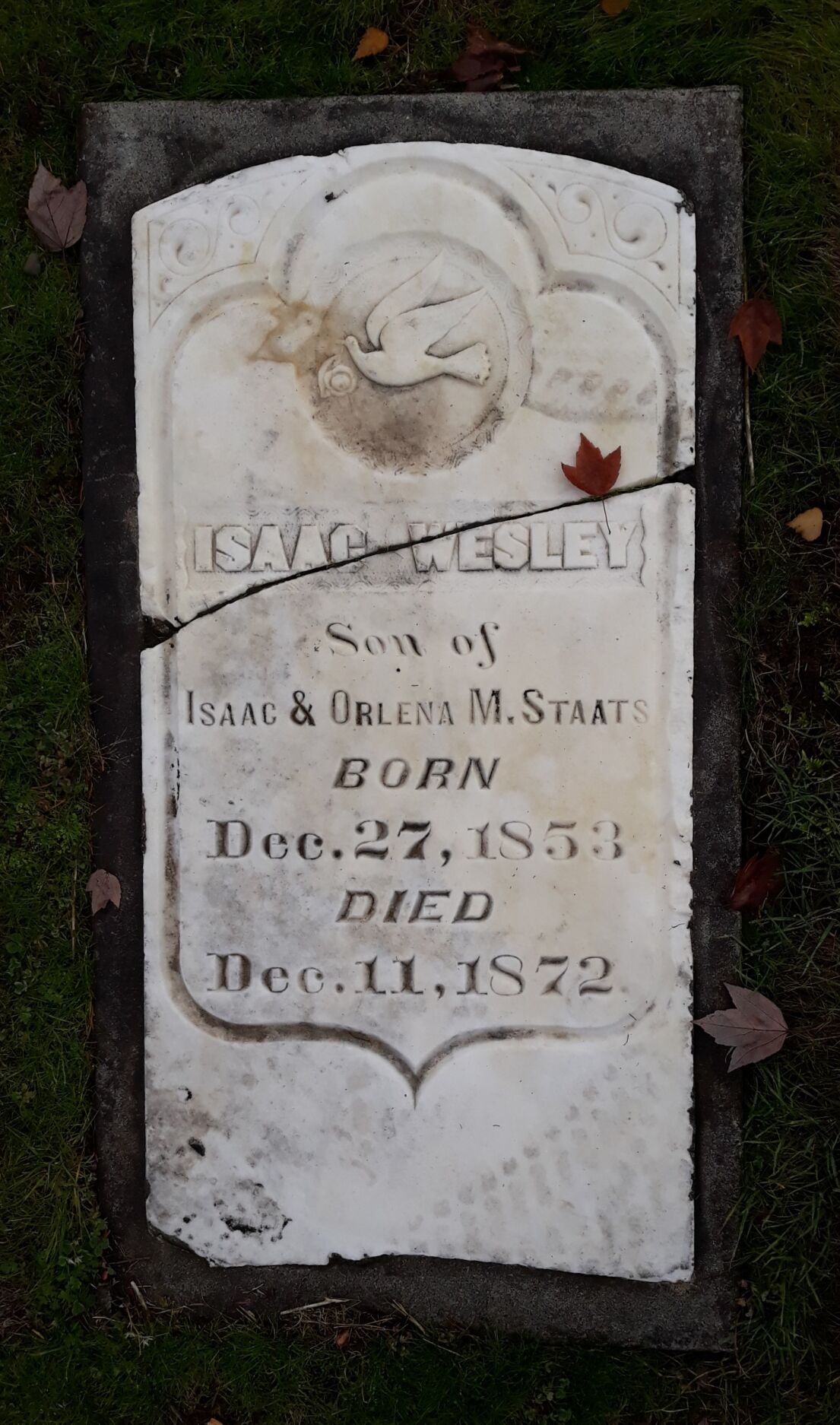 Tombstones in colonial America often featured skulls and other macabre imagery as well as grim warnings about the wages of sin. By the time Isaac Wesley died in 1872 and buried at the Fir Crest Cemetery outside Monmouth, markers were often adorned with doves and other more gentle images, reflecting a changing American attitude toward death. 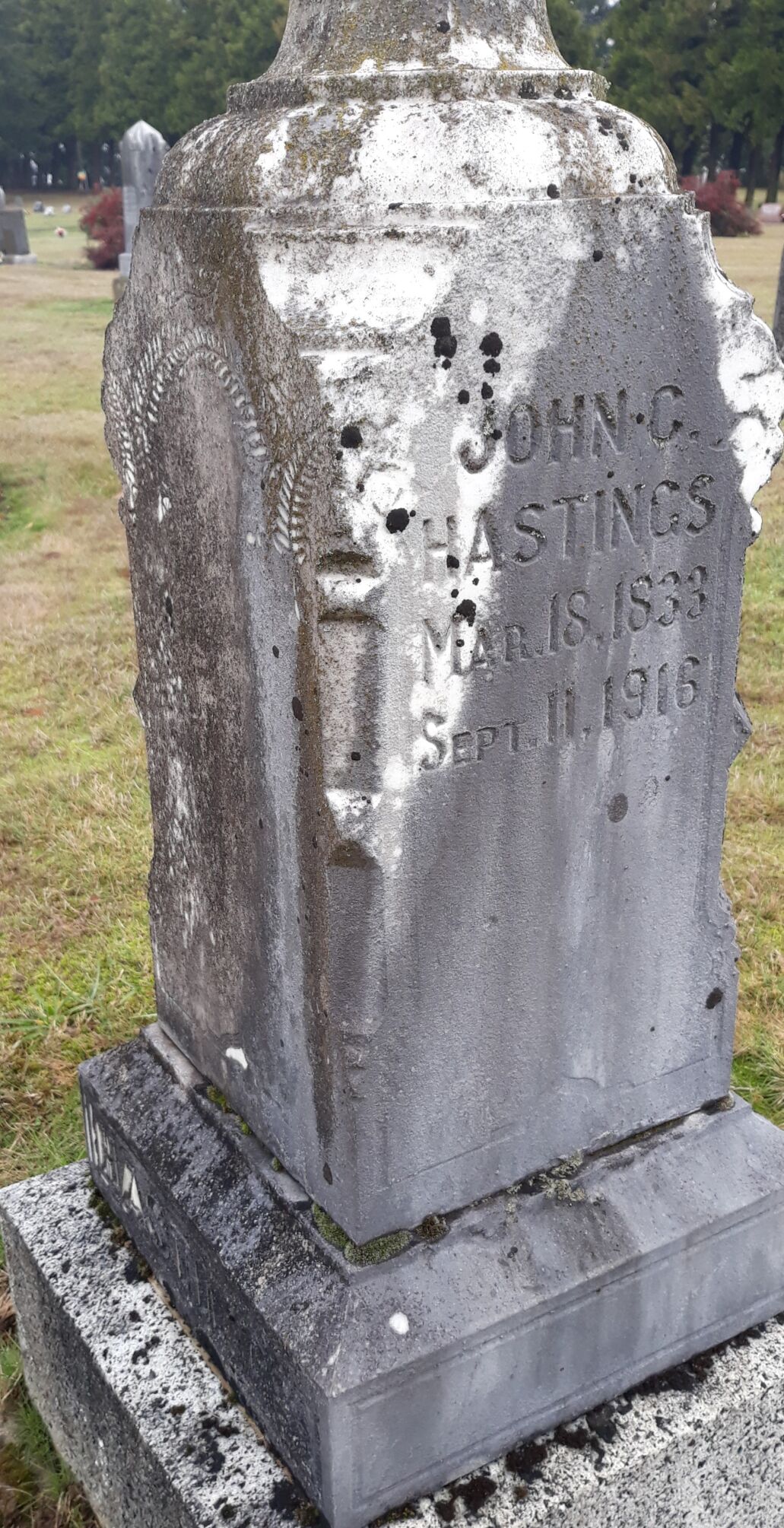 John C. Hastings' 1916 tombstone at the Fir Crest Cemetery outside Monmouth illustrated how American tombstones of the era often tall and stood in tribute to those who passed away. They were more ornate than both the tombstones of the past and the present. Modern grave markers are often flat and low to the ground to facilitate grounds maintenance. 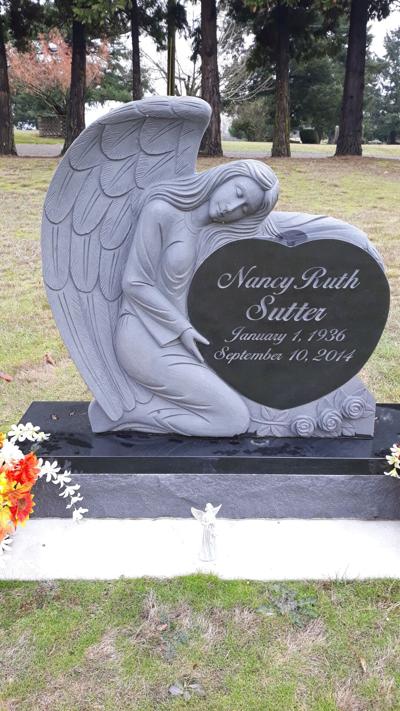 In contrast to the grim headstones of colonial America, modern markers (such as this lovingly angelic image for Nancy Ann Sutter at the Fir Crest Cemetery outside Monmouth) often feature comforting images that illustrate the departed in the hands of a loving God.

Tombstones in colonial America often featured skulls and other macabre imagery as well as grim warnings about the wages of sin. By the time Isaac Wesley died in 1872 and buried at the Fir Crest Cemetery outside Monmouth, markers were often adorned with doves and other more gentle images, reflecting a changing American attitude toward death.

John C. Hastings' 1916 tombstone at the Fir Crest Cemetery outside Monmouth illustrated how American tombstones of the era often tall and stood in tribute to those who passed away. They were more ornate than both the tombstones of the past and the present. Modern grave markers are often flat and low to the ground to facilitate grounds maintenance.

Of the 102 passengers on the Mayflower, 45 died in the winter of 1621 before sitting down for a Thanksgiving feast almost a year later.

By 1690, children read about death in the New England Primer.

“In the burying place may see graves shorter there than I. From death’s arrest, no age is free. Young children, too, may die.”

Richard Meyer, a professor emeritus of English at Western Oregon University, knows about such burying places and their graves. He spent a great deal of his professional life studying them. Much of American history is etched in stone, Meyer said — the stone used to remember the dead.

By remembering the dead, he said, the astute observer can learn about history as well as society’s ever-evolving association with mortality. Thanksgiving, in that sense, provides a teachable moment.

The stones of early European settlers often feature seemingly macabre imagery such as skulls and offer grim warnings about the wages of sin.

The Puritans of 17th-century North America often looked down on art because they believed it drew the faithful away from God and inevitably toward to the devil. Portraits were an exception. They were considered historical records.

Yet images on grave markers, when they were there, were meant to inspire fear rather than offer solace.

“Those early stones reflect the early Puritans, who were strict Calvinists,” Meyer said. “They reflected that Puritan mindset. The Puritans evolved. They began to mellow. The skulls became cherubs.”

Skulls on markers largely disappeared in the Victorian era.

“By the time you get to the 19th century, where the Puritans looked to the graves, the Victorians looked to the heavens,” he said. “Their images were things like the Pearly Gates and clasped hands.”

However, Puritans should not be confused with Pilgrims. The latter were separatists.

They believed the only way to live according to Biblical principles was to leave the Church of England entirely. They are the people most closely associated with the Plymouth Colony and Thanksgiving. The Puritans, who settled in what is now Boston, thought they could reform the Anglican church from within.

“The whole thing with the Pilgrims is that they were a whole different group from the Puritans, even though they were both in Massachusetts,” Meyer said. “They were really different religious sects.”

Laurel K. Gabel, one of Meyer’s colleagues in the field of gravestones, said it is a bit misleading to talk about Pilgrims’ grave markers. “They had no permanent markers for the most part,”  Gabel said. “They started around 1670.”

Even then, less than 50% or so of people had permanent gravestones. The reasons were both practical and religious, said Gabel, who lives in New England and is a trustee of the Association for Gravestone Studies as well as the head of its research department.

“Early Puritans didn’t put much stock in the body,” she said. “It was the soul that they were concerned about, and that’s what they focused on. Bodies were disposed of with little ceremony. They didn’t pray over the graves.”

As other Christian denominations moved to the American colonies, Gabel said, Puritans and Pilgrims became more sentimental. It helped that they no longer had to worry quite as much about surviving on day, or one hour, to the next.

“There was a much more optimistic and upbeat attitude by the middle of the 17th century,” she said. “There was an ability to focus more on gravestones. People began to read prayers over the graves. They would often have a funeral sermon that was part of the original service.”

Such remembrances represented a seismic shift in the attitude, said Gabel.

“In the early days, it was the worms crawl in, the worms crawl out,” she said. “It seems pretty grim, but we’re judging them by our day. It was not that grim for them. It was a reminder to them that you you didn’t know if you were going to die in the next 10 minutes. So be thou ready.”

Gabel said people often read too much into the markings on colonial gravestones.

“We impose a lot of our own prejudices when we look at grave markers,” she said. “We think every little squiggle had to have some symbolic meaning. Sometimes a circle was just a circle.”

It was different for Victorians, “Every particular flower had a completely distinct meeting,” Gabel said.

Yet Victorians were incredibly uncomfortable with death in comparison with their 17th-century ancestors, she added — right down to the words they used. Coffins became caskets (a word originally used to describe a case for preserving personal treasures). Burial grounds became cemeteries.

In some ways, despite their macabre imagery, early European settlers had an almost cordial relationship with death because it was so much a part of their daily lives.

“They weren’t afraid of bones,” Gabel said. “By the Victorian age, heaven was seen as an actual place with houses where you could sit around with your friends.”

To the early settlers, death was death. One was dead until the resurrection and Judgment Day. There was no visiting with friends.

Of course, death stalked more than European settlers in the 17th century. Thanksgiving evokes congenial images of Pilgrims and Native Americans living and working together in harmony and friendship, but that may be only in myth.

Pandemics (coupled with war and famine) killed an estimated 54.5 million people — or approximately 90% of the indigenous population in what Native Americans record as the Great Dying.

Lewis tries to tell the story of indigenous people both as a professor and as a tribal member. He was a major force behind the design of the Chachalu Museum and Cultural Center in Grand Ronde.

Thanksgiving presents a very distorted view of history and the toll it took on Native American populations, Lewis said.

“It’s most like a fantasy reality that somehow Native people and the Pilgrims sat down and had some sort of nice feast together,” he said. “There may have been such feasts, but I don’t think necessarily that the relationship was peaceful at all.”

The Great Dying wasn’t confined to the Native people of the eastern United States, Lewis added. The tribes of the mid-Willamette Valley were largely extinguished by diseases brought by merchant seamen, he said, beginning with small pox in the 1780s.

Malaria was the biggest killer in the region, brought by fur-trading ships in the 1820s.

Given the complicated relationship between indigenous people and Europeans, some have called for Americans to rethink — or even discontinue — annual Thanksgiving celebrations.

Lewis said what is really needed is education.

“People need to reach out and learn about other people’s stories and other people’s history other than what’s portrayed in the Thanksgiving mythology,” he said. “I would hope people would be pushing for better education through our schools.”

At most, he added, perhaps Thanksgiving should be renamed Family Day. However, in an age when death has again inched closer to everyday life, Lewis said it remains important to connect with loved ones — even if it’s long distance via technology.

Thanksgiving isn’t going to go away, he added.

“It’s a pretty well-embedded thing in our society,” he said. “A lot of people just get together as a day to hang out with their relatives. There should be annual breaks when people take time to get together with family.”

...so 45 dead Pilgris sat down to the first Thanksgiving dinner? Interesting 🧐