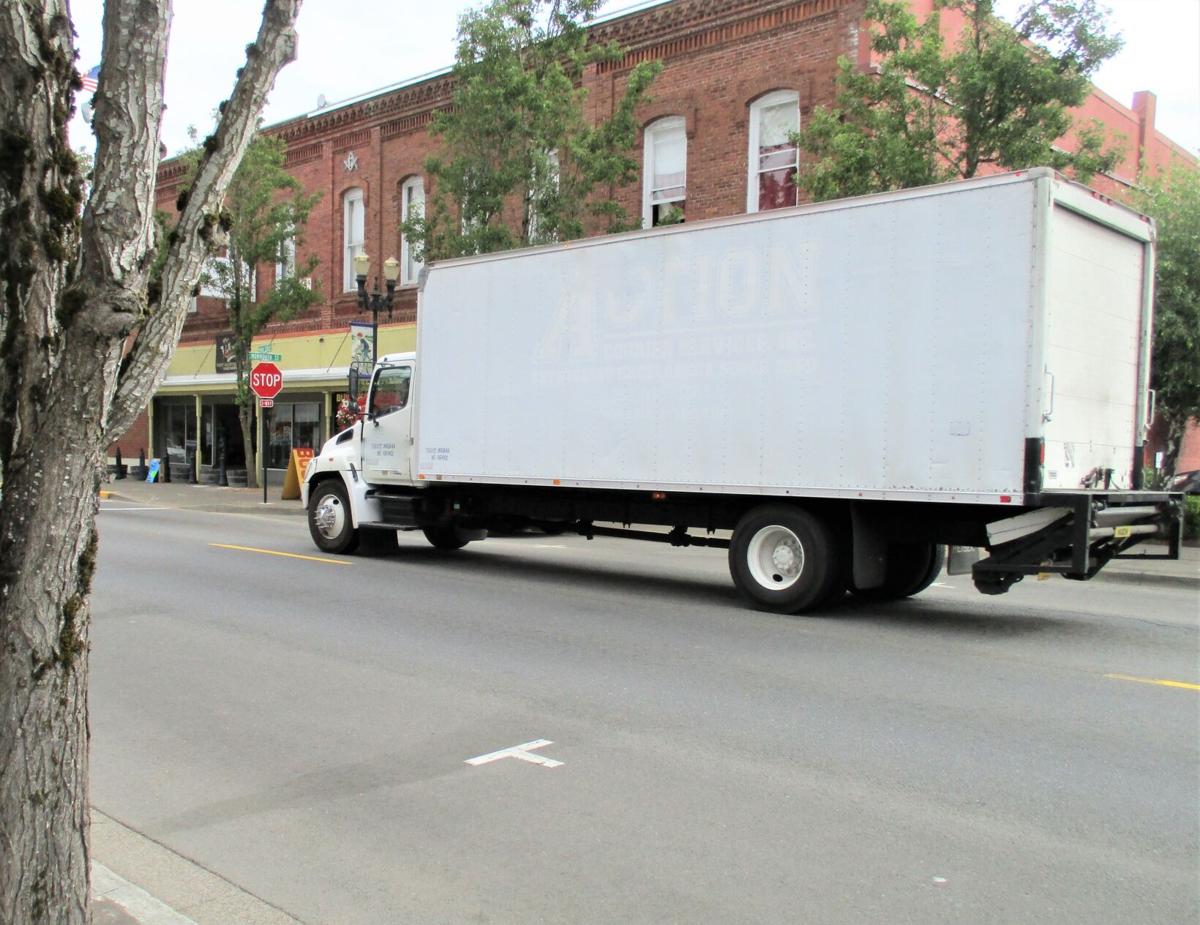 One of many trucks that travel Main Street, one of the few East-West routes through the city. 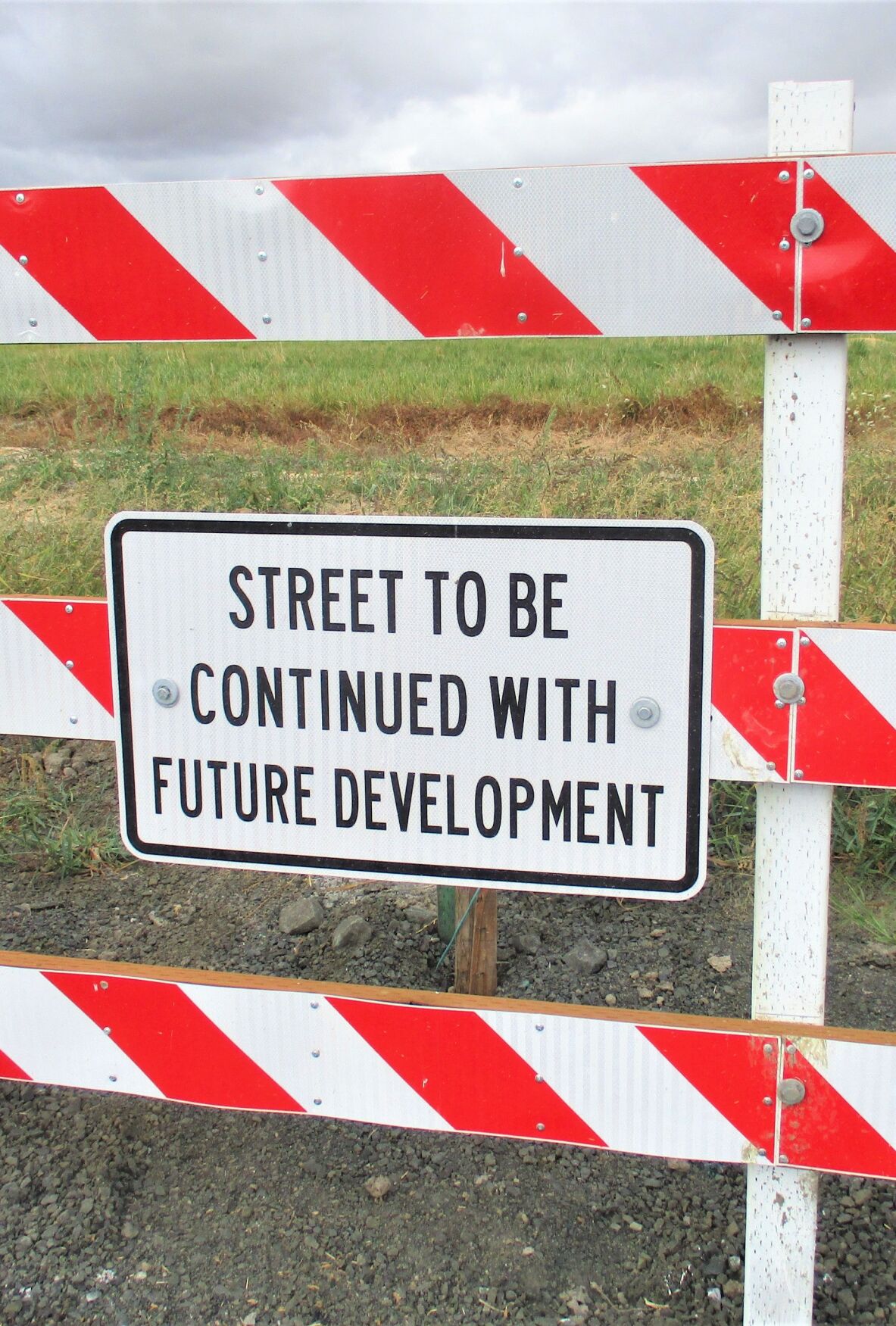 A sign at end of Mountain Fir Avenue, right, indicates it will be continued in the future. 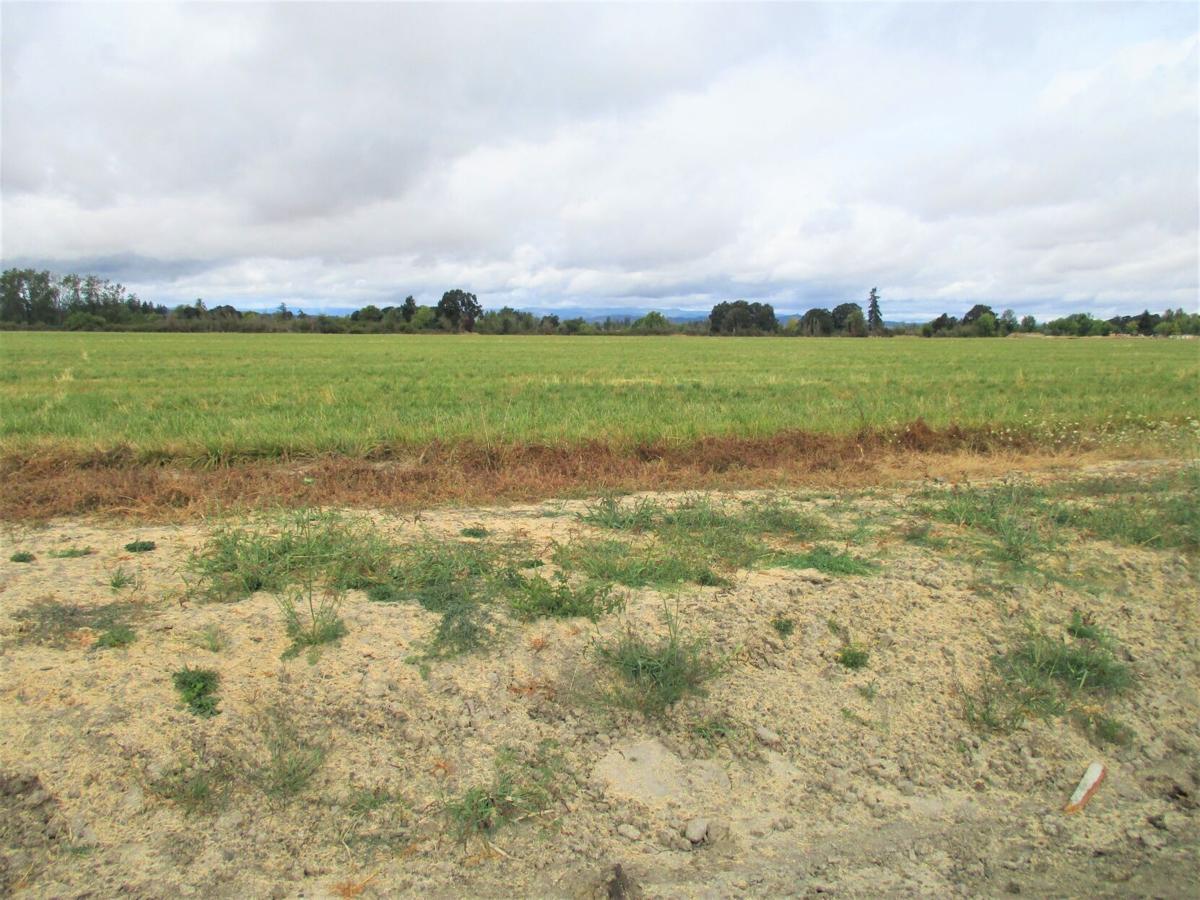 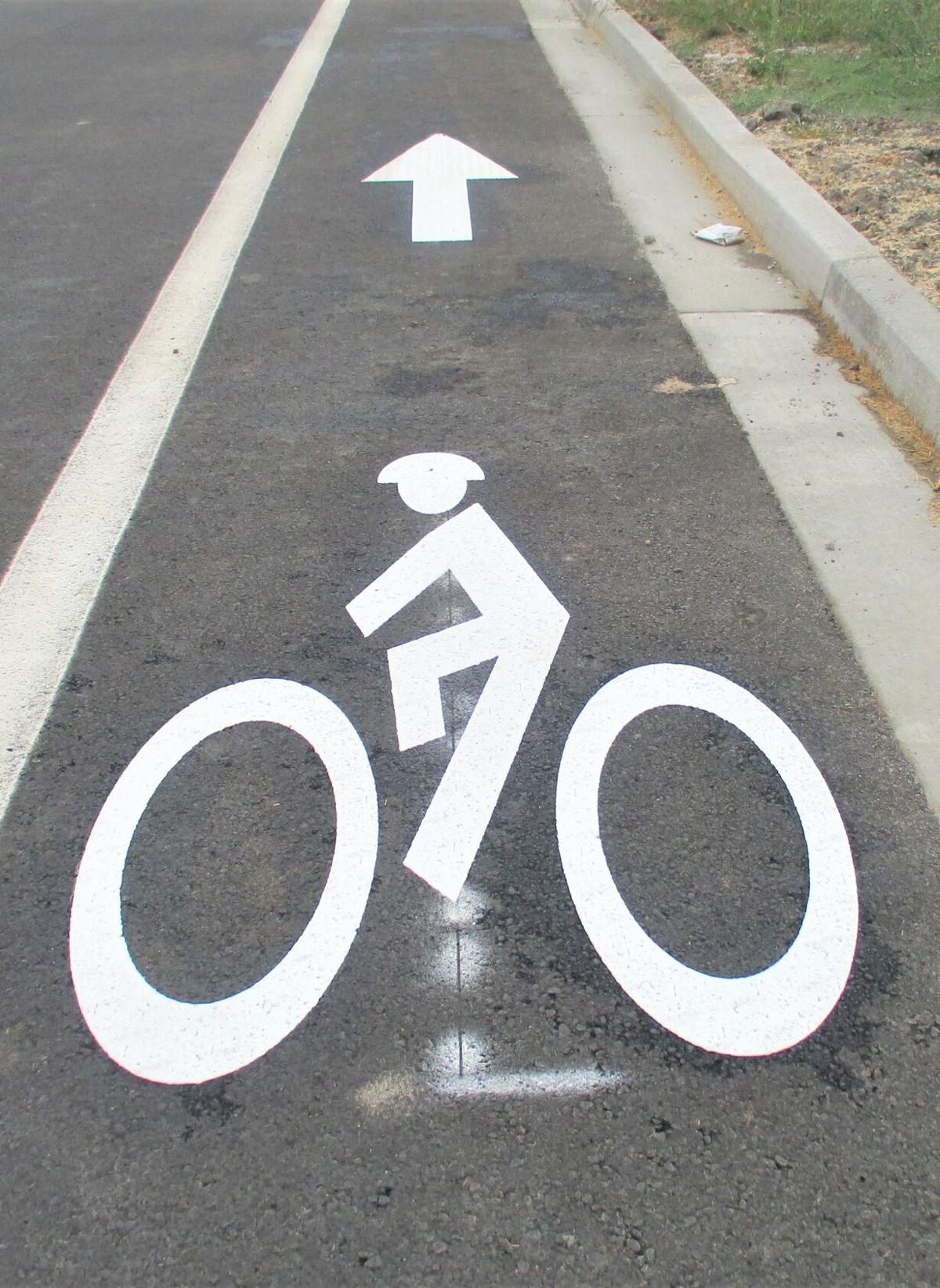 One of many trucks that travel Main Street, one of the few East-West routes through the city.

A sign at end of Mountain Fir Avenue, right, indicates it will be continued in the future.

INDEPENDENCE — It’s got a nearly $71 million price tag and it’s got a 20-year timeline.

It’s the city’s new transportation system plan (TSP) and, although a “cost constrained” version slashes the initial amount to just over $18 million, the road to new and improved routes in town already is proving to be a bumpy ride.

At issue is how to redirect farm and freight vehicles, which currently rumble through downtown. And perhaps the most ambitious step in the plan, as well as the single most expensive piece of it so far — construction of a new east-west thoroughfare in the south part of the city — is likely to face a funding struggle.

Though $4 million of the estimated $9 million cost was submitted by U.S. Rep. Kurt Schrader as part of the federal transportation reauthorization-infrastructure bill that’s pending in Congress, the committee didn’t include that project’s funding in the final house bill.

The TSP is designed to increase cross-town mobility, to accommodate an anticipated rise in both population and traffic. It was recently approved by the Independence City Council on a 5-1 vote – and several councilors stressed it should be considered tentative, subject to revision as it moves forward. In fact, the TSP has been modified several times since Portland-based Kittelson & Associates, the city’s engineering consultant, came aboard months ago to formulate it. The overall aim: better traffic control as the city experiences far more growth.

Numerous online open houses, discussions by the Independence Planning Commission, as well as the city council, and a spirited debate led by City Councilor Dawn Hedrick-Roden all were part of the process. A few of the milestones seem significant, as the city reaches toward the future, by changing or adding streets.

A new east-west thoroughfare is needed, but substantial hurdles lie ahead. Known as the “southern arterial,” this high-capacity street would extend from Mountain Fir Avenue east to Corvallis Road and west to the city limits. However, to do so would require travel across railroad tracks and wetlands — both are regarded as stumbling blocks by regional traffic experts. Even the Mayor John McArdle predicted this challenge would be a “fight” during a discussion of the TSP the first time it came before the city council.

Financing doesn’t appear to be easily assured for the new thoroughfare, either. Fifteen years ago, when the city began tackling a TSP, which was published in 2007, the two major thoroughfares in town — Main Street and Monmouth Street — were actually part of Oregon State Highway 51. They still are.

So, the Oregon Department of Transportation (ODOT) has been counted on to supply a large share of the money for upgrades to these streets, and that will continue to be done under the new TSP, according to ODOT. That isn’t the case for the planned expansion of Mountain Fir to Talmadge on the west and to Corvallis Road on the east — the avenue isn’t slated to be an extension of the state highway system.

Though some of the cost could be borne by private development, builders often prefer “shovel-ready” property — Oregon law requires special permits from the Oregon Department of State Lands (DSL) in order to undertake construction on wetlands. In fact, DSL cautions that some land-use consultants may have “excessive negative attitudes” toward the agency on this basis, according to DSL’s online guide to hiring experts in wetland assessment. The Oregon Wetland Program Plan, for the period 2017-21, has a “no net loss of wetland goal” in effect.

The push-back on wetland rules isn’t new. At a special work-group meeting on wetland issues a few years ago, Dallas City Manager Brian Latta, who at the time was the city administrator for Harrisburg, explained that the lack of substantial land development in that city wasn’t directly due to developers — it was the result of wetlands.

“I started to ask them: what’s the challenge with the wetlands?” he said in testimony to the work group. “It’s process. They get confused. It’s challenging. It’s costly. So, they leave our town and go somewhere else,” he explained.

Independence will “coordinate with the city of Monmouth on the final alignment west of the city limits” for the Mountain Fir Avenue extension, according to the TSP.

An alternate route may help keep farm and freight traffic off Main Street, but it runs by several Central District schools. The current TSP, when compared with the one done in 2007 that it replaces, appears to put more emphasis on two city streets for moving agricultural and freight-bearing traffic: Hoffman Road and 16th Street.

The city plans to put in improvements that would help passage of heavy traffic entering town, and perhaps signage, to encourage larger vehicles to turn on Hoffman Road from Highway 51.

The changes range from a possible traffic light at Polk and Main streets to “traffic calming measures” along Hoffman and Gun Club roads, where electronic signs might advise the speed being traveled or warn of possible congestion, said Matt Bell, the planner from Kittelson & Associates who presented the TSP.

The freight-and-farm equipment route suggested in the TSP as “preferred” drew criticism from Hedrick-Roden.

In the plan, these streets were designated as a “preferred” roadway for these vehicles, starting with the turn at Highway 51 onto Polk Street, which then becomes Hoffman Road, and continuing on to 16th Street and along Talmadge Road.

After city councilors agreed to change the term from “preferred” to “alternate,” Hedrick-Roden remained opposed to the TSP, then voted against it.

Her concern centered on the safety of farm vehicles.

Parts of Talmadge and 16th Street have “no shoulder,” she said.

“You get one tire off the road and you end up in the ditch,” she stressed.

Councilor Kathy Martin-Willis pointed out that taking that route won’t be mandatory. Whether to follow the alternate route or proceed through downtown, drivers are free to make their own decisions, she said.

“We have to work with what we have,” observed Councilor Tom Takacs, who added that the city is limited in terms of north-south connections.

Councilor Shannon Corr asked about the flexibility of TSPs in general, and whether they ordinarily undergo change over time.

“Based on reviews of your past TSP and two or three TSPs going back, that’s pretty common,” Bell said.

Later, when City Planner Fred Evander was asked about the “alternate” route — on one end, 16th Street passes by both Central High School and Talmadge Middle School and, on the other, by Ash Creek Elementary — he reiterated that there are very few feasible ways for large vehicles to transect the town, aside from Main Street.

Will families in Independence be worried if farm-and-freight trucks use 16th Street? That remains to be seen — findings from a look into a similar situation proved inconclusive.

Parental views of children’s transportation to school, including by walking, didn’t seem to be affected in neighborhoods that commonly had freight trucks rolling by, according to research published six years ago in the Journal of Transportation Management.

“We have continued to work on this — still much work to be done,” said the study’s lead author, Stephanie Ivey PhD, the associate dean for research at the Herff College of Engineering at the University of Memphis in Tennessee.

Proposals to allow for more travel on E Street and Monmouth Street may help with growing traffic, but the effect is hard to predict.

There are plans to split Monmouth Street into two lanes as it heads eastward toward the intersection with Main, so that a right-hand turn and a left-hand turn can be executed at the same stop.

E Street, which is seen as an alternative to Monmouth Street in the TSP, has a pedestrian bridge now planned where, in the initial stages, a connection was proposed across Ash Creek, prompting worry among some residents that cars would be crossing there.

Now it’s clear that it will be a bridge for bicyclists and walkers instead.

“I am very enthusiastic about this,” said Zach Kronser, who lives nearby. “I really like to walk and bike.”

Little girl gets new heart for her 4th birthday

Avlon: Texas showed how rigged the system really is