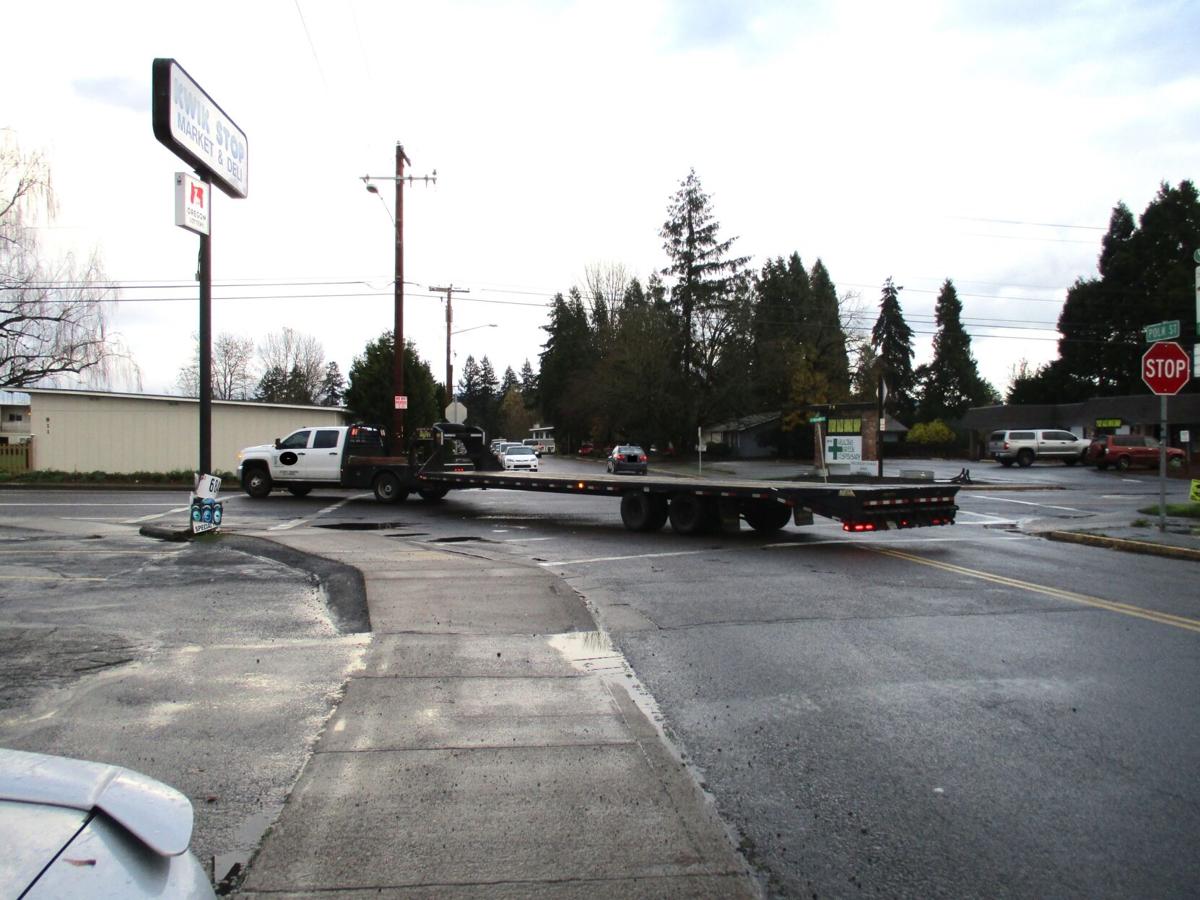 The intersection of Polk and Main is addressed in Independence’s TSP. 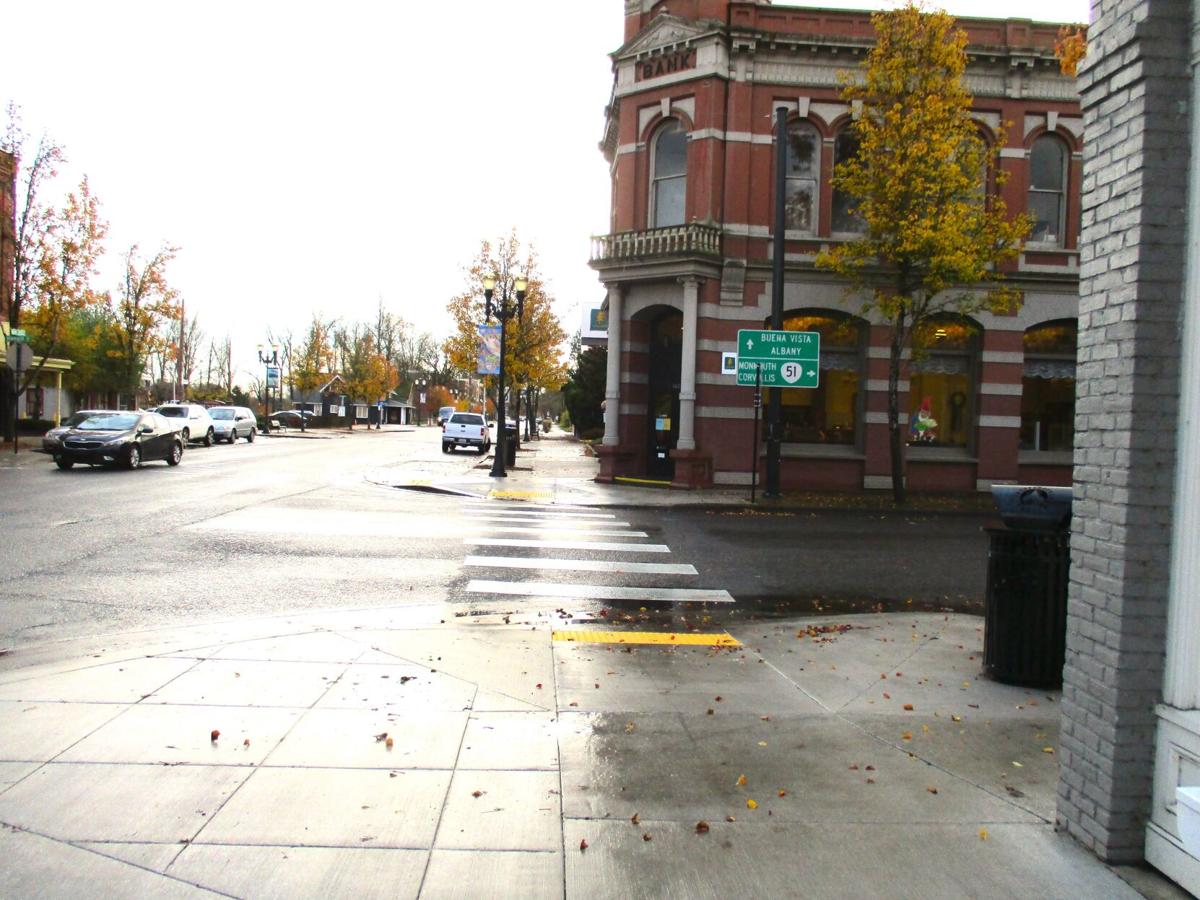 The intersection of Main and Monmouth streets.

The intersection of Polk and Main is addressed in Independence’s TSP.

The intersection of Main and Monmouth streets.

INDEPENDENCE — A proposed transportation plan to help ease traffic as Highway 51 enters Independence to become the city’s Main Street includes several alternatives, from roundabouts to traffic lights. However, Mayor John McArdle made it clear at a recent city council meeting that he favors an option that would put a new roadway through the southwest section of town.

“I know we’d have to fight with (Oregon Department of Transportation) and the rail folks for an overpass on the rail lines and getting through some wetlands,” McArdle said.

But the other measures, including the suggestion of turn lanes at Monmouth and Main streets, likely will mean losing the historic character of the downtown area, he pointed out. So, despite the barriers to a new thoroughfare, “it seems like we are going to have to climb that mountain,” he said.

The pronouncement came after a presentation by Matt Bell of Kittelson & Associates, the Portland-based consulting firm the city hired to conduct the traffic analysis and to offer solutions for the traffic increases on Main Street – increases expected to persist in the near future. More than 100 new apartments at Independence Landing are nearing completion on the river front and construction is continuing at Brandy Meadows, a subdivision in southwest Independence.

There already are “failing intersections” along Main Street, noted Bell, who explained that this term refers to heavily used areas in need of better management. The last Transportation System Plan (TSP) for Independence was completed 13 years ago.

Ideas for improving the flow of cars include the possibility of establishing turn lanes at the intersection of Main and Monmouth streets and also at Main and Polk streets. Traffic lights and roundabouts might be considered there, as well, Bell said. The Independence Bridge is another spot where traffic-control improvements appear to be warranted, he added.

Roundabouts would require an effort in public education, observed City Councilor Shannon Corr, noting that in places where she’s previously lived many drivers found them confusing, with “fender-benders” as a result.

As for putting one at Polk and Main, “I cannot even imagine that,” she said, adding that “many 18-wheelers go through that area.”

“There is a learning curve about roundabouts,” agreed City Manager Tom Pessemier. He described the consultant’s report as a way of “really throwing everything out there as an alternative.”

A TSP is a way for cities to meet their transportation needs for the future, by adopting the “three P’s” — projects, programs and policies — to help with the expected change and growth. And, in Independence, that growth comes from outside the community, as well, Bell pointed out.

During morning hours, commuters from Monmouth and other areas west of Independence take Monmouth Street to cross the Independence Bridge or to reach Highway 51 to head to West Salem or to the Salem Bridge. A reversal occurs in the early evening, as residents return from their jobs elsewhere, according to pass-through studies conducted by the consulting firm. Motorists from south Salem also travel through town, taking the Independence Bridge to reach Polk County destinations, and driving back the same way.

Some of the proposed concepts for dealing with traffic along Monmouth Street seem to be a “cookie cutter” approach, Mayor McArdle said, explaining that he lives on Monmouth Street near downtown and sees on a basis daily how many cars drive past. He voiced support for the new “southern arterial,” as it is called, which is part of the Southwest Independence Concept Plan.

“The alignment does have costs associated with a railroad overpass and a bridge over the South Fork of Ash Creek that have made the road expensive,” confirmed City Planner Fred Evander. “We are looking at potential options for the roadway, including an at-grade crossing of the railroad, rather than an overpass.”

Both the mayor and city staff have been working ODOT and the railroad to determine the feasibility of that concept, Evander said.

In fact, both the mayor’s and the city council’s perspective are critical to the success of a TSP update, according to Michael Duncan, the senior region planner for ODOT who has been assisting Independence.

“Elected leadership brings strong understanding of the story of the community, and that’s something that data and analysis don’t always capture,” he said. “It really takes both to illustrate the transportation needs and solutions for the next 20 years.”

The consultant’s analysis suggests the proposed “southern arterial” may alleviate much of the traffic on Monmouth and Main, Duncan noted.

However, one other potential barrier to the “southern arterial” is the wetland component of the area — a topic that surfaced at the Independence Planning Commission meeting in October, when the city’s floodplain was discussed. Planning Commissioner Rebecca Jay observed there is a lack of definitive flood-prone mapping in that part of town.

“It seems like we ought to have that information if you are going to have building and development there,” she said.

Others, including City Councilor Tom Takacs, have asked for a cost-benefit ratio on the different traffic improvements. Asked about the price tag of the various TSP alternatives, Evander acknowledged that “we do not have a scope of the cost of any improvements at this point.”

“We are attempting to whittle down concepts to financially feasible alternatives,” he said.

Online open houses have been held to get public input for the TSP. However, Evander said the outreach fell short of what was desired. Another open house, this time on Facebook, with two-way interactions, is scheduled for early December.

“There are another seven months or so before the city adopts the plan,” said ODOT’s Duncan. “I imagine that between now and then this project will land on a set of alternatives, which strike a balance.”

'Chilling and ominous': SE Cupp on how Trump could still pardon himself