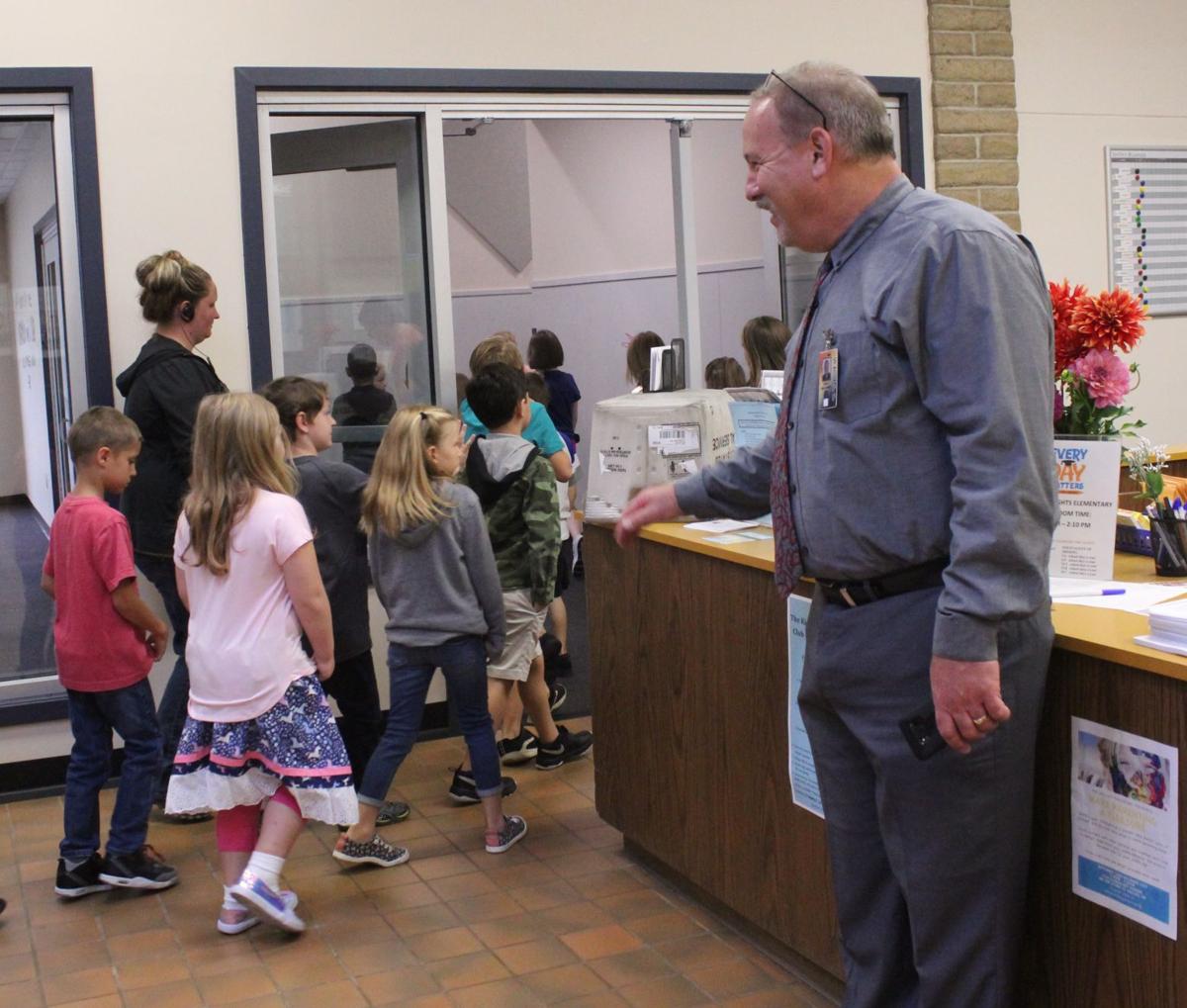 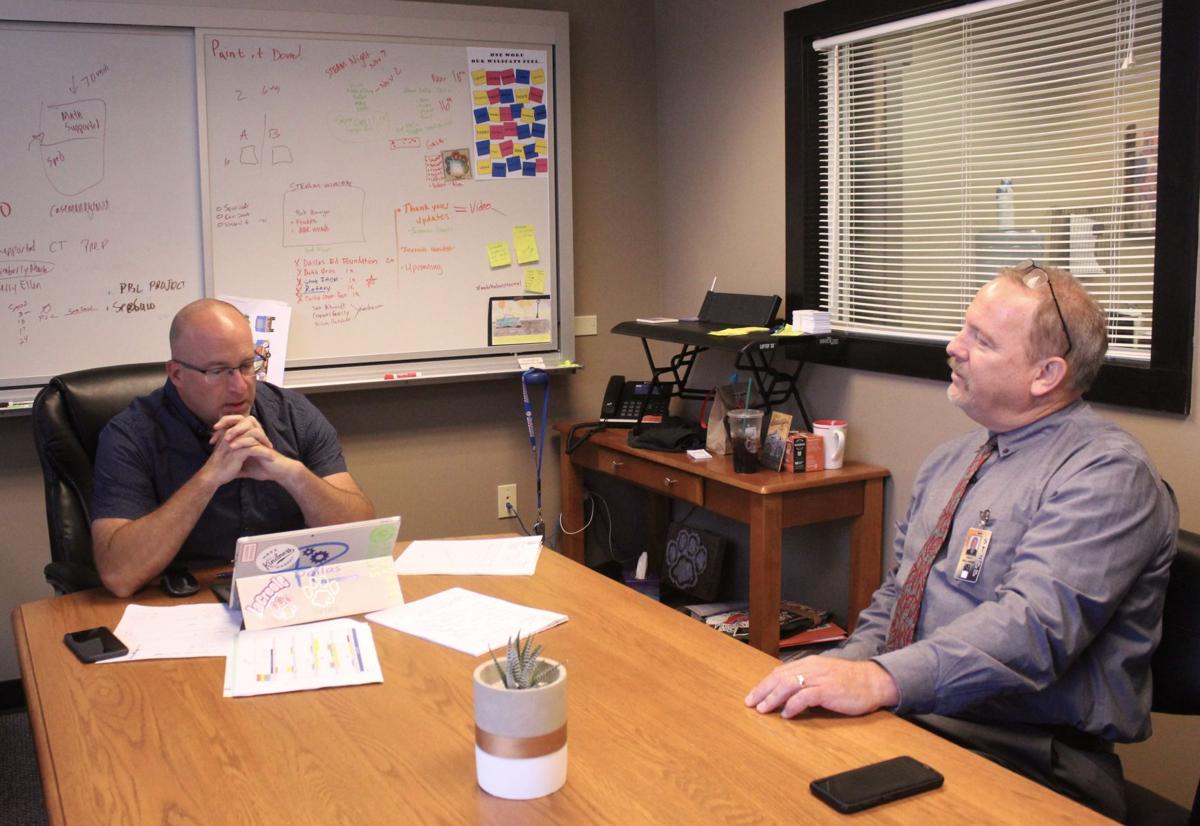 DALLAS — On Wednesday, the first full day of school in Dallas, interim superintendent Andy Bellando visited two schools to check in on the start of classes.

Baughman said the first count of students had the school at 368, a little bit down from the previous year. He said kindergarten classes average about 22 students, but third grade rooms had 29 or 30 students, which is higher than he likes.

Kindergarten students are being introduced to school slowly, attending half days until Sept. 21, Baughman said.

“Last year we did that through the entire month of September,” Baughman said. “We felt that was a little longer than what kids needed.”

Bellando said since the introduction of full-day kindergarten in Oregon schools, students have shown a capacity to adapt to attending a full school day. They just need a little time.

“When full-day kindergarten first rolled out, there were plenty of questions about whether 5-year-olds would be able to adapt,” Bellando said. “I think generally, they’ve adapted very well. In fact, if anything, they’ve demonstrated that 5-year-olds can experience success at being full-day students.”

Baughman said the school has a new first-grade teacher, a new special education teacher and a new library technician. Teachers have also developed a way to start the day that may students prepare for learning.

“We started a ‘mindful morning’ opening to the day,” he said. “It’s meant to give kids some self-regulation skills and readiness for learning, based on brain research.”

He said in the past, packed scheduled had students rushing off to a music or physical education class right away. Baughman said taking a few minutes before class starts sets a better tone for the day.

“We have so much that we want to accomplish in the day for learning, that we’ve, in times past, scheduled music classes, PE classes right away after 8 a.m.,” he said. “Kids are probably in their classrooms dropping off backpacks and rushing off somewhere, so that rush just keeps going all through the day. We are taking a little bit of time to set our focus.”

Bellando’s next stop was a LaCreole Middle School, where the new sixth-graders were attending their second day, but the seventh and eighth graders had walked in the doors for the first time this year.

Principal Jamie Richardson said sixth graders had a head start to help introduce them to the different class format at the middle school.

“Coming from elementary to middle is like going from 0 to 60. There’s a little less structure than elementary, so we try to transition them a little bit slower,” he said. “With that comes some freedoms and choice making. We try to get to them and work them in slowly, so it’s not going from walking in straight lines to no lines.”

Richardson said enrollment was around 700, about the same as last year.

LaCreole’s enrollment jumped from 660 in 2017-18 to 700 last year, which forced staff to get creative with the schedule to avoid large class sizes. That effort continues.

This year, the school offers a video production class.

“We’ve always had news and journalism and yearbook all in one class, but now we’re seeing that there’s some really creative kids and they can take it to the next level,” he said.

In another addition, he said a school counselor will lead a class called “Team Adventure.”

“That’s about team building and relationships. It’s counseling, but it’s PE at the same time,” he said.

“We found that teacher, they teach a full load, but if there is one class that they have a passion for, it just ups their game,” he said.

Richardson said the community will have plenty of opportunities to see what students are up to this year through the Innovate Dallas initiative that began last year. Innovate Dallas focuses student-led projects involving science, technology, engineering, art and math projects. At the end, the school holds an “Exhibition Night” to demonstrate what students have learned.

He said the goal is to encourage groups or businesses to team up with the schools to allow students to work on real-life projects.

“The focus is that our community can’t really understand how they are going to be partners with schools until they understand what schools are doing,” he said. “We want these authentic experiences for our kids, but that means that they have to be real problems and real issues, or things that they can do. It just brings up their game and they want to learn for the sake of needing to know it rather than there’s a test at the end or something.”

Andy Bellando, Dallas’ interim superintendent, started on Aug. 23, and is still getting to know the district, students and staff. Bellando retired from Silver Falls School District in July, where he had been superintendent for nine years. He was considering taking on an interim post at some point in the future when the Dallas position opened.

“When I retired, I told folks that I may be interested in another opportunity in education, but I was going to give myself some time,” Bellando said. “I told folks three to six months, but this opportunity came open a little sooner than that. Really only after nearly two months.”

He said that Dallas seemed like the right place, so he decided to apply ahead of his timeline.

“I had always known in the back of my mind I would always enjoy working for another school district, and this one just felt like the right opportunity and the right time,” Bellando said.

He takes over for former superintendent Michelle Johnstone, who resigned in July after teaching and classified unions issued votes of no confidence.

Bellando said the district is ready to move on from that.

“What I have recognized with staff … to this point is that they are committed to the mission of the school district and that’s putting kids first,” he said. “There has been a high level of optimism and proactive efforts to move the district forward.”

He said having the title interim doesn’t mean he’ll be satisfied with the district treading water until a permanent superintendent begins.

“This is not going to be an idle year,” he said.

He said he’s focused on establishing relationships and collaborating with staff and the community to put together a plan for the use of the Student Success Act grant, which could be as much as $1 million for Dallas in both the 2020-21 and 2021-22 school years.

The Student Success Act, passed by the State Legislature this year, funnels $2 billion to schools in the next biennium. Districts are to use the money to improve class sizes, raise graduation rates and provide more resources to early childhood education. Each school district is to write a plan, which must include public input, and submit it to the state by Nov. 1.

“Those things are determined by the needs of the community, so the public will have to give some input to help us identify what some of those priorities are in Dallas,” Bellando said.

He said he’s still sorting out how the district will solicit feedback from the community.

“While I was introduced to it in Silver Falls, I haven’t done anything with it until I got here just a week ago. I’m beginning to review the information,” he said. “What that exactly looks like, I’m not certain.”

His other goals this year is make sure students succeed in the classroom and leave the job in a place where the next superintendent will be able to pick up where he left off.

Bellando has been an administrator for half of his career, but he still loves being in classrooms. He said that’s a trait he looks for in administrators he hires.

“Whenever I hire an administrator, I ask, ‘Do you miss kids? Do you miss the classroom?’ If their answer isn’t a solid and immediate yes, then they may not be my first choice,” he said. “Every administrator needs to have the same passion of educating kids as a teacher does in the classroom.”

Tag, you're it! Chidren's game gets revamp