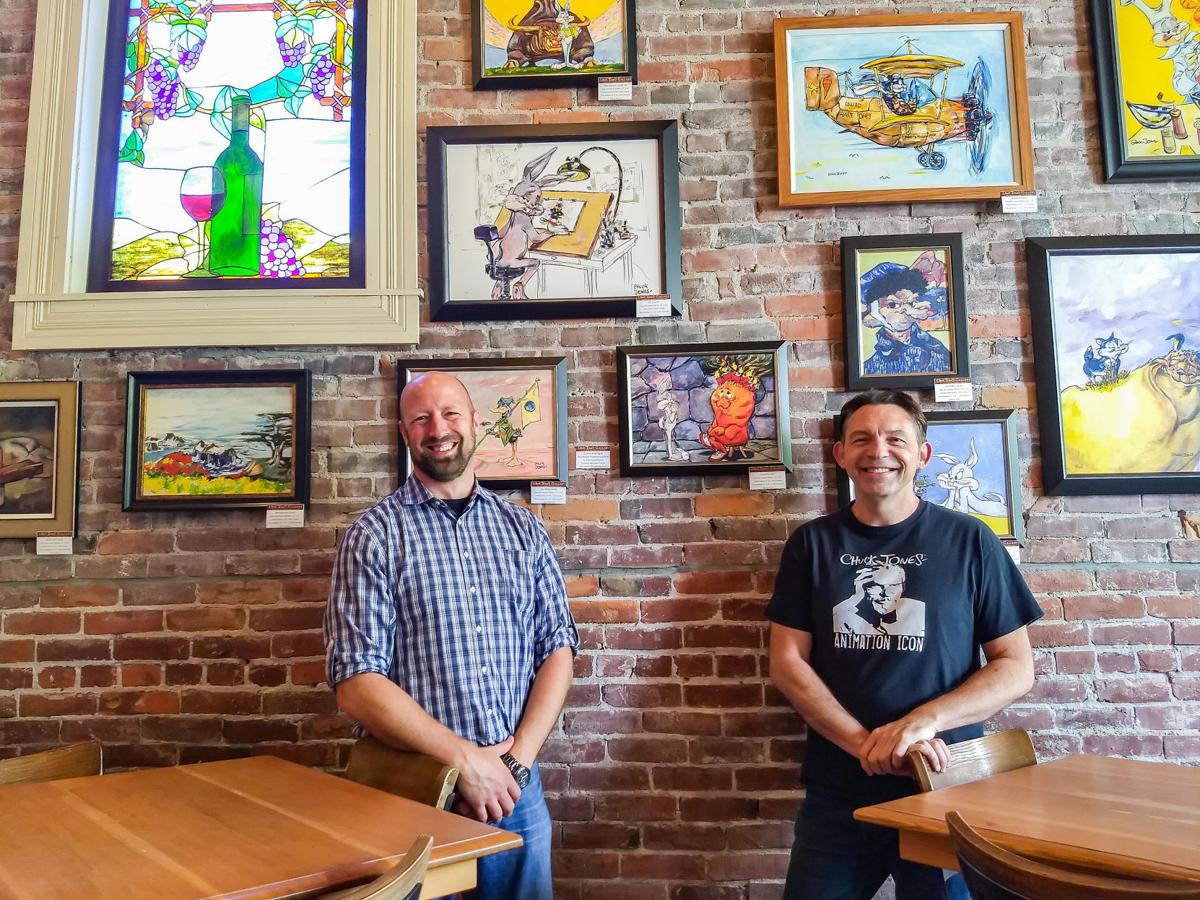 John Bracken, left, and Michael Fiacco stand among a sampling of the Chuck Jones works on display at Crush. 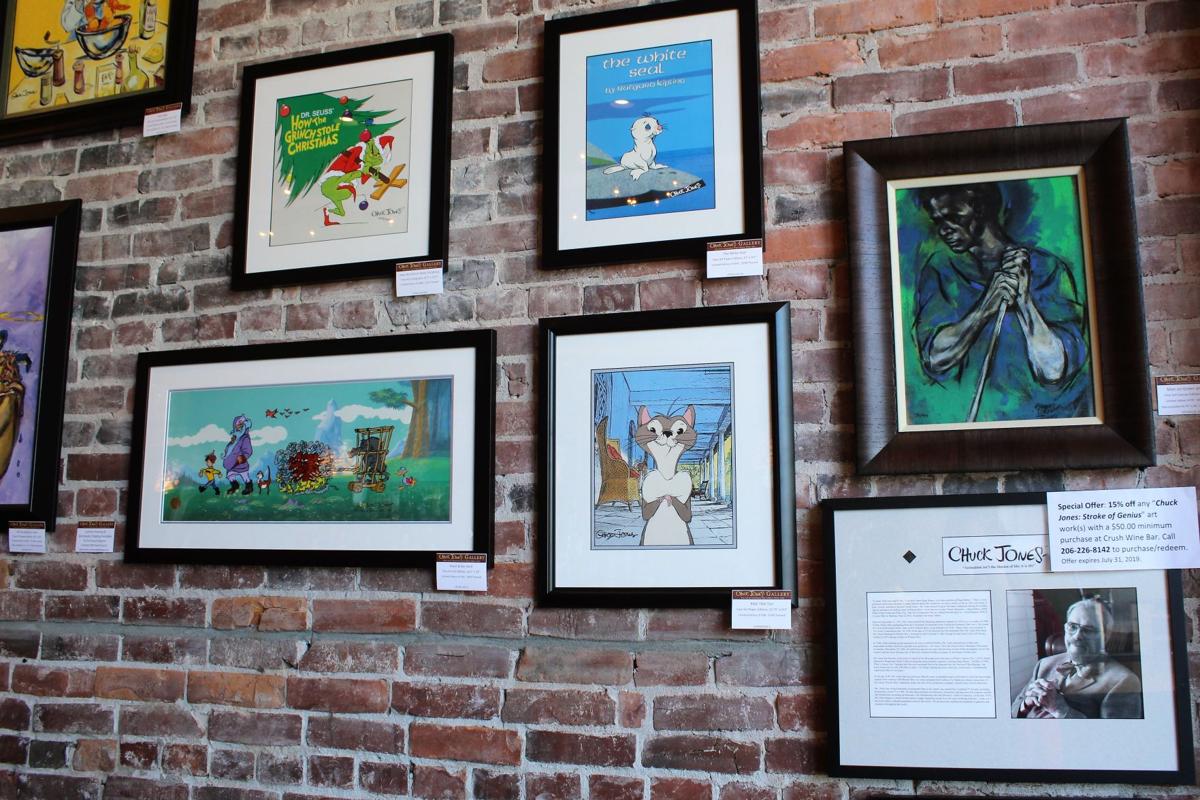 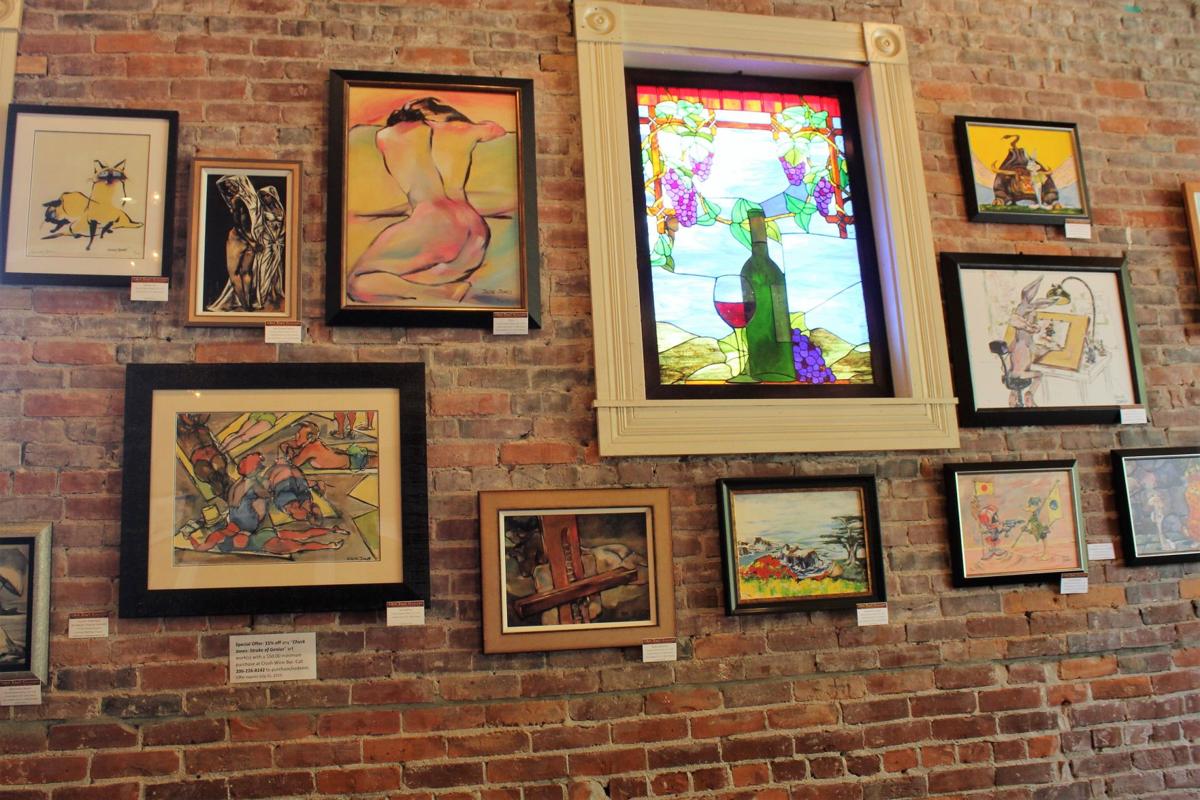 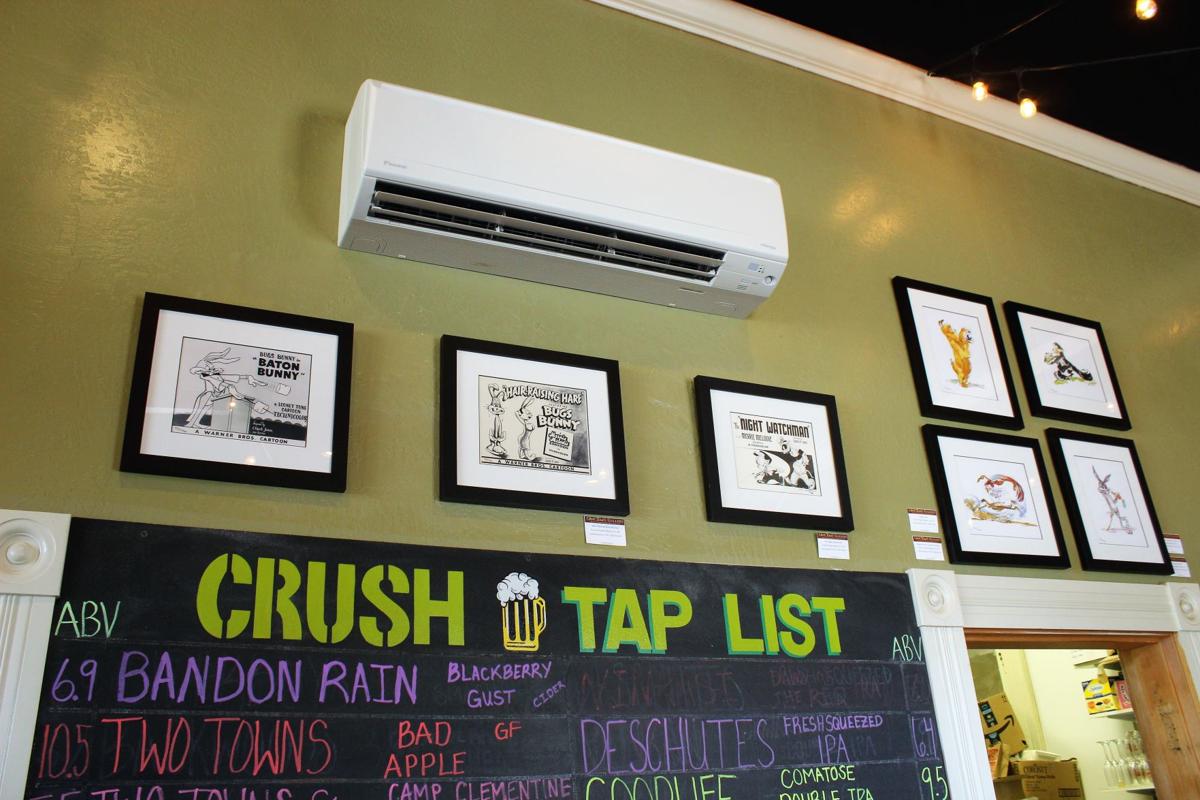 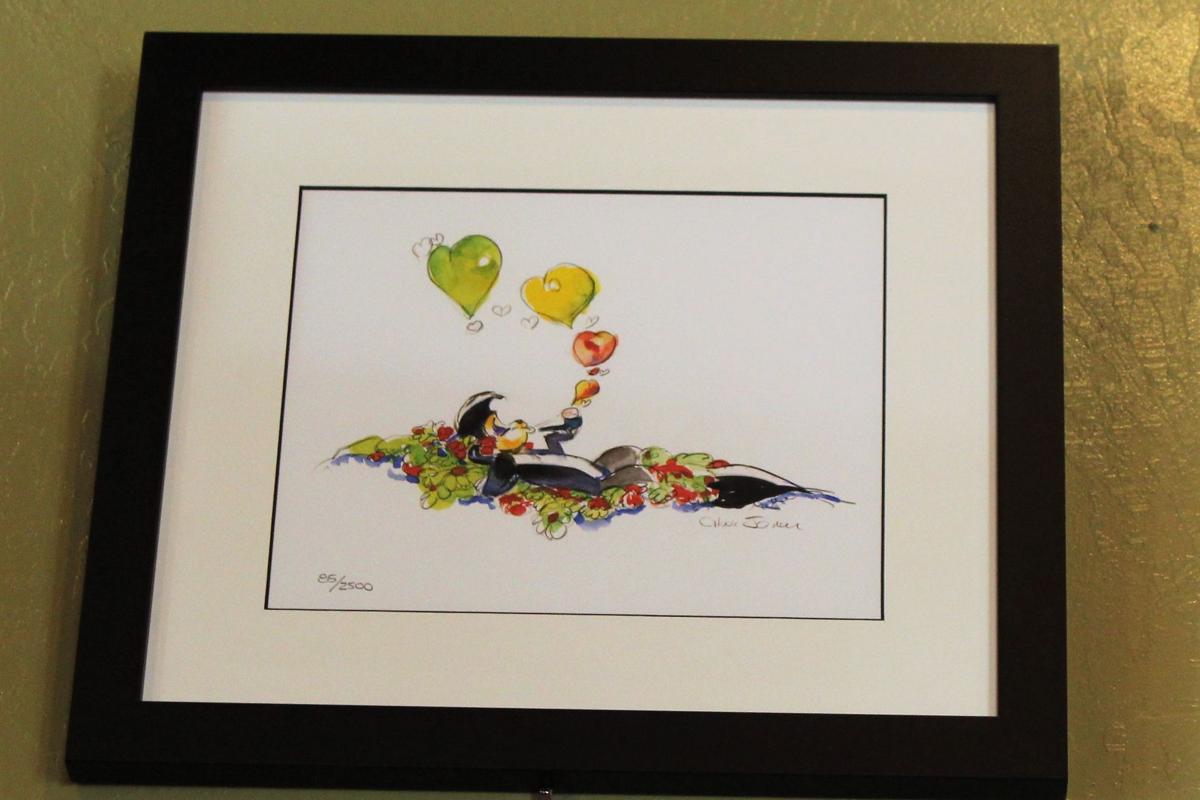 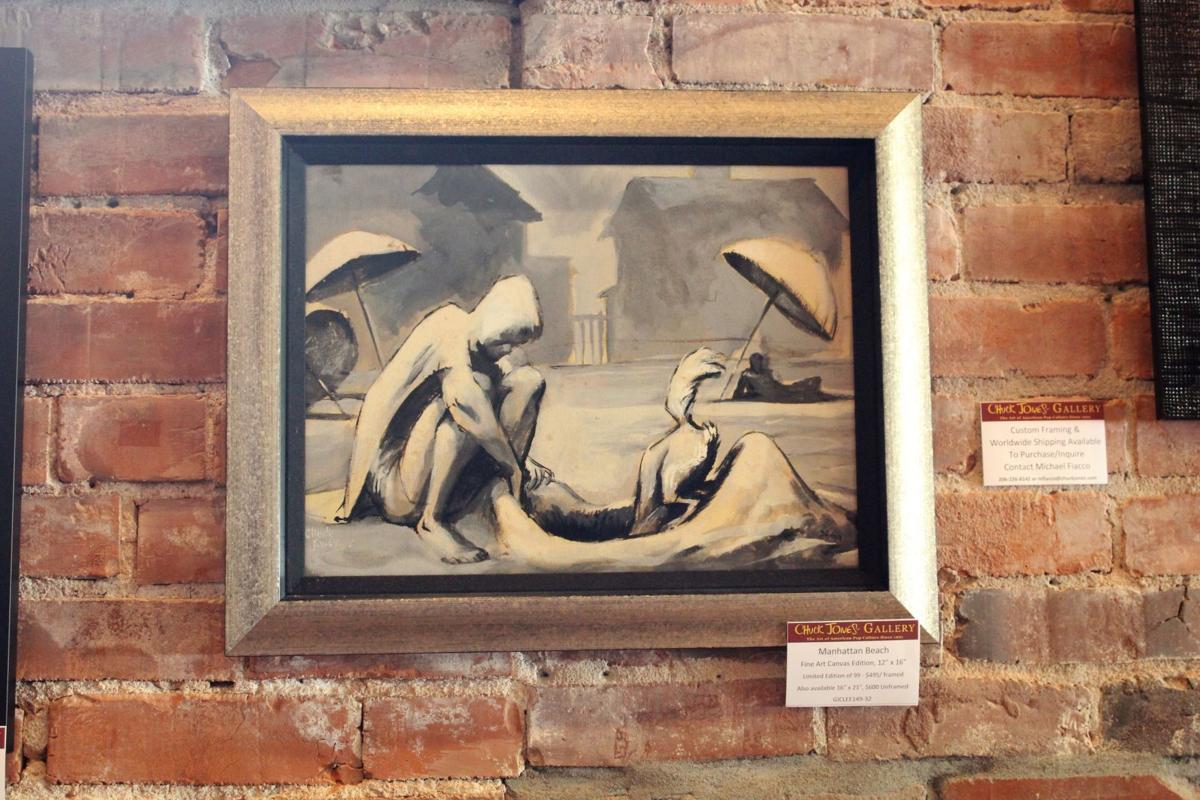 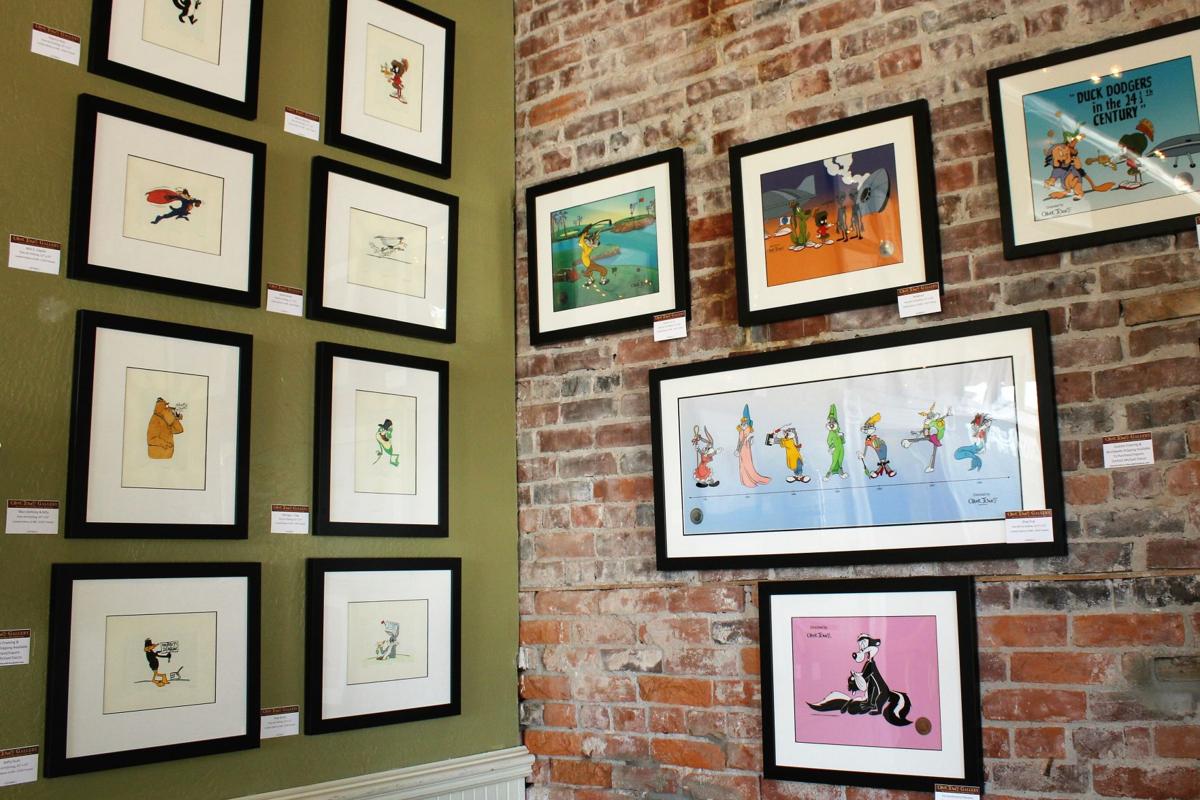 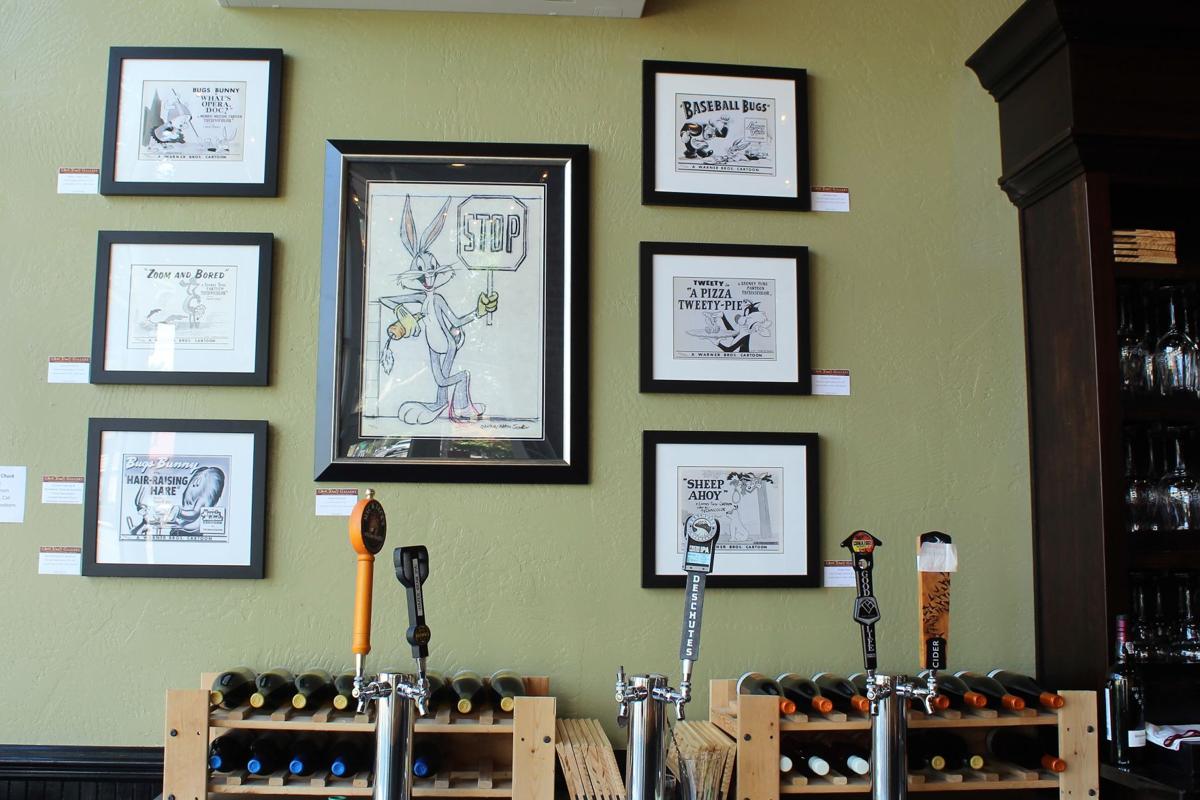 John Bracken, left, and Michael Fiacco stand among a sampling of the Chuck Jones works on display at Crush.

MONMOUTH — From his classic Looney Tunes characters to his lesser-known fine art, animation director Chuck Jones’ work is on display in Monmouth.

How did the exhibit land at Crush Wine Bar & Tasting Room?

It all started with a conversation between John Bracken, owner of Crush, and Michael Fiacco, director of special exhibitions, Chuck Jones Gallery.

Fiacco and his husband split their time between Monmouth and Palm Springs.

“I happened to wander in (to Crush),” Fiacco said. “I’ve always thought this was a great space, and then I got to meet John and he told me about all the improvements he was planning. Then we got to talking and I thought, ‘You’ve got these great brick walls and this beautiful space, let’s host a Chuck Jones exhibit here.’ I’ve never done one in a small town before, but I happen to live here.”

Bracken said the response has been positive.

“We’ve been getting a lot of people saying, ‘Oh man, I grew up on this,’” Bracken said. “People always pick out a favorite and they talk about it.”

Bracken’s favorite of those that are displayed in his bar, is “Bugs Bunny – Stop on the Lot.”

The exhibit opened on June 8 with a fundraiser for Puplandia Dog Rescue.

The Chuck Jones Galleries were established by and are still owned by Jones’ family.

“The Jones family is very philanthropic,” Fiacco said. “More often than not, the openings that we have for my special events and pop-ups benefit a local charity, especially dog rescue (and) arts education.”

Fiacco does special exhibitions across the United States.

What makes the show at Crush unique, he said, is not only that Monmouth is the smallest town that’s hosted a Chuck Jones exhibition, but that “this is a wider collection of Chuck’s art than even any of our galleries have because we don’t have that much room to show just his art.”

“It’s a great opportunity for Oregon or Northwest animation fans to see a wide range of (Jones’) art, including more serious fine art, which includes beachscapes, landscapes, animals, female nudes even,” Fiacco said. “Chuck was a master of the human form, which really is what made his Looney Tunes characters so human in their movement.”

Jones graduated from the Chouinard Art Institute in Los Angeles, now California Institute of the Arts, “at the ripe old age of 18, and there weren’t any jobs, it was the depression,” Fiacco said. “Animation was kind of a new technology in the 1930s. He got a job as a cell washer, because they used to reuse the celluloid, the animation cells.”

In 1938, Jones landed a job at an animation studio with Leon Schlesinger, who later sold his company to Warner Bros.

“Chuck, he was only in his 20s, he was the youngest director they ever had,” Fiacco said. “He directed his first cartoon in 1938. It was called 'The Night Watchman.' It included Sniffles, who was the first Looney Tunes character with a name.”

Cartoons were an important part of the movie-going experience until the 1960s, Fiacco said.

Many of the original hand-painted cells were destroyed.

“They didn’t think of these as works of art, even though they were hand-painted,” Fiacco said. “They threw them all away. So 99 percent of all original animation cells were destroyed.”

That’s why any that survived are so valuable, he said.

“We hear stories all the time about, ‘My friend’s father worked for Disney and he gave me, like, 30 animation cells, and I didn’t know what to do with them so I threw them away,’” Fiacco said. “Now they go for thousands of dollars.”

It won’t cost that much to buy any of the pieces on display at Crush.

“One thing that we’re really proud of is that we have art starting at $95 up to tens of thousands of dollars,” Fiacco said. “We really try to have something for everyone’s budget. That’s something the family really believes in strongly.”

Hear Roger Stone talk about his call with Trump

Traveling to Florida is a roll of the dice