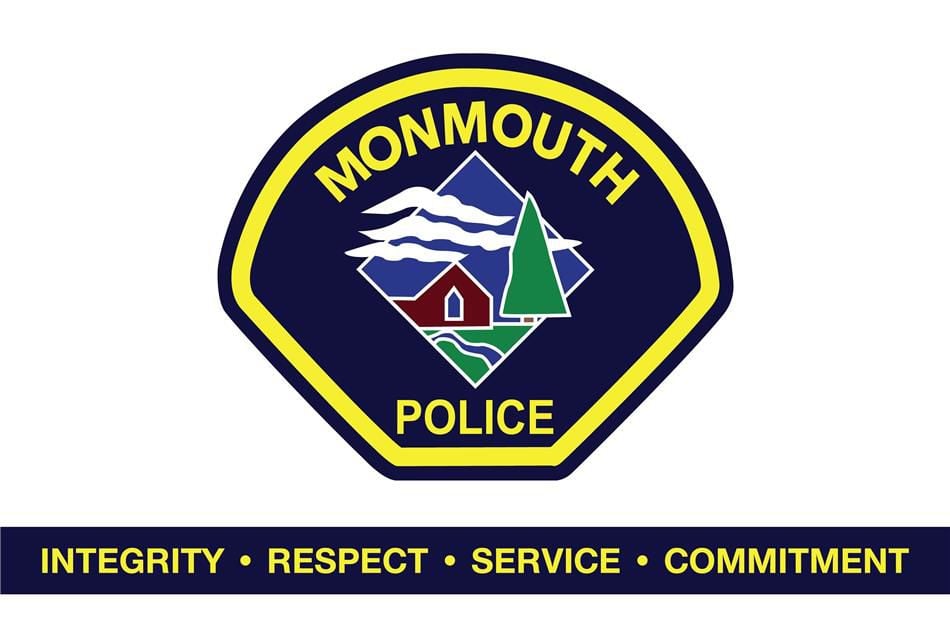 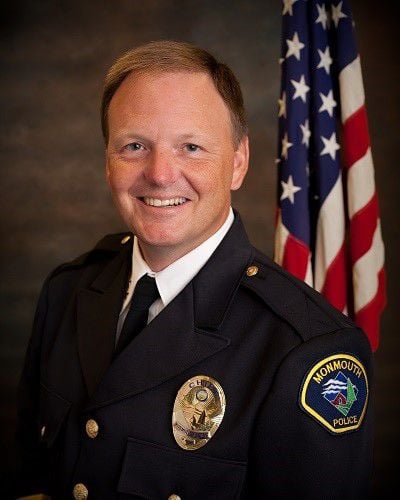 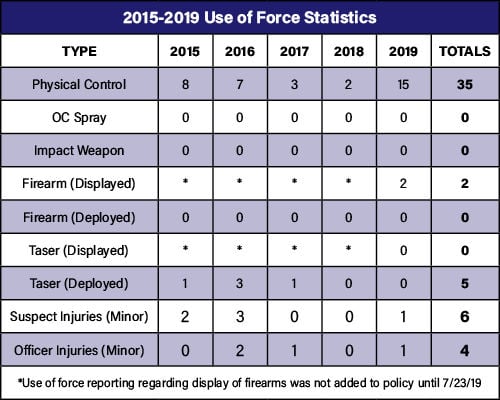 “Our profession needs to listen to our community members, answer their questions — any questions they may have — be open-minded, available, accessible,” Tallan said.

People in communities of all sizes, and in all 50 states, have been gathering to protest police brutality and systemic racism after George Floyd was killed by a Minneapolis police officer kneeling on his neck for nearly nine minutes on May 25. The names of other Black, unarmed people who have been killed at the hands of American law enforcement have become prominent in protesters’ signs.

While, none of these killings have happened in Monmouth, the global attention to use of force, has led city councilors and citizens to ask about local police policies.

Tallan spoke on the issue to the Monmouth City Council at the June 16 meeting.

He started by recognizing “every member of the Monmouth police department for the professionalism, dedication and compassion that they exhibit every day as they serve all members of the Monmouth community.”

Tallan addressed the #8CantWait campaign, which was started by a group called Campaign Zero that cites use-of-force data for the changes in policy it advocates: ban chokeholds and strangleholds; require de-escalation; require warning before shooting; require (officers to) exhaust all alternatives before shooting; duty to intervene; ban shooting at moving vehicles; require use of force continuum; require comprehensive reporting.

“The Monmouth Police Department does not train on the carotid control hold (chokehold), nor does it condone its use except in circumstances where deadly force would be justified,” Tallan said. “For us it’s only as a last resort, when there is no other option available for an officer in order to preserve their own life or to preserve the life of another would be the only time that would be used.”

In response to calls for de-escalation requirements, Tallan said officers are sent to a 40-hour crisis intervention training, which emphasizes dealing with a person in crisis.

Polk County has two crisis intervention teams which consist of one specially trained officer or deputy and a qualified mental health professional.

MPD policy states officers should “generally not: use stances or tactics that can be interpreted as aggressive; allow others to interrupt or engage the person; corner a person who is not believed to be armed, violent or suicidal; argue, speak with a raised voice or use threats to obtain compliance.”

Their policy states “a verbal warning should precede the use of deadly force, where feasible.”

“I’d also want to point out that during our training, our officers are taught to always be giving verbal commands,” Tallan said. “Who they are, why they’re there and whatever it is they want that person to do.”

Regarding exhausting all alternatives before shooting, MPD policy states that “officers shall use only that amount of force that reasonably appears necessary given the facts and circumstances perceived by the officer at the time of the event to accomplish a legitimate law enforcement purpose.”

Officers have a duty to intervene if they observe another officer using force beyond that which is objectively reasonable under the circumstances. They also are required to promptly report the incident to a supervisor.

Monmouth Police Department policy states “an officer should only discharge a firearm at a moving vehicle or its occupants when the officer reasonably believes there are no other reasonable means available to avert the threat of the vehicle, or if deadly force other than the vehicle is directed at the officer or others.”

The MPD does not use a use of force continuum. They use the objective reasonableness standard set by the Supreme Court, Tallan said.

Regarding comprehensive reporting, Tallan said, “Everything we do is documented.”

Tallan said he was pleased that some of the reforms are things his department is already doing.

“We’re in favor of making sure we don’t get people in to the profession who should not be in the profession,” Tallan said in a conversation after the meeting. “So in reference to the list of officers that have either been terminated or de-certified in other states, we certainly want to know that information. I think that’s a good idea.”

He said he believes they would discover that information anyway in the extensive background checks they do.

A previous employer may not disclose certain information because of policy or law.

Tallan said they also ask the applicant about it.

Regarding making an officer’s disciplinary record public, Tallan said there is some difficulty there because some of that is protected by law.

“I think what’s important in terms of making sure that we keep the public’s trust and that we’re transparent (are the issues that deal) with safety,” Tallan said. “Those are things that I think are important for people to know.”

He doesn’t know if people would be concerned about things like filing a report late or missing an appointment.

They started a pilot program in 2014 and since 2016, all of their officers assigned to patrol wear body cameras.

“We essentially record just about every contact that we have and that recorded data is uploaded at the end of an officer’s shift every day and that data is kept for at least a minimum of 180 days, that we have that and we can go back and review,” Tallan said.

Councilor Byron Shinkle asked what processes were in place to assess and help police department staff “with perhaps the stress of the job, ongoing maybe mental health issues and stress that builds up and could possibly bubble over into an incident where a citizen takes the brunt of such an episode.”

Tallan said they have a wellness program, that they’ve “done better with each year.”

“We have five volunteer chaplains that visit with us regularly,” Tallan said. “They’re volunteers and there’s no requirement for our officers to interact with those chaplains, but they make themselves available to any officer.”

Those interactions are confidential, he said.

The city also has an employee assistance program, which also is confidential.

“This last year, I implemented a new part of our program and that is every one of our officers has been given the ability to go visit with a police psychologist,” Tallan said. “She has a practice up in the Portland metro area where she specializes in dealing with police, I guess police-related issues for police officers or first responders.”

The city pays for the initial visit and then insurance kicks in if they want to continue seeing her, he said.

Councilor Roxanne Beltz asked if statistical information from the department, which is reported to the council, could be put on the city’s website.

“To make sure people see, what is our balance, in terms of the equity of who is having interactions with our police department,” Beltz said.

He said he did get some questions asking if those types of documents could be made available online.

“I do want to do that,” Tallan said. “I’m not prepared to right now, to do it immediately, but that’s a goal of mine to work toward.”

Councilor Chris Lopez encouraged the council to view the discussion as a “jumping off point into this conversation as opposed to the end of the road.”

“I think the national conversation is constantly evolving and this is an area of great local and state and national interest. I encourage us to follow suit with that and see tonight as just a beginning,” he said.

Lopez asked Tallan if he had any ideas for improving civilian oversight of the department.

“I don’t right now,” Tallan said. “I’ve always felt that the council and the mayor and our community, we’re a tight knit small community. There’s not a lot that can happen here without everybody knowing, almost everyone knowing, what’s going on, so in all of my career, which has been here in Monmouth and Independence, I’ve felt like we’ve done very well with the council oversight, with people who are able to reach out to us or reach out to the council with questions or concerns.”

Tallan said he’s always had good relationships with the city managers he’s worked for, “in terms of being able to report to the city manager all that’s occurring within my department and getting advice and then allowing the city manager to take any concerns to the council if needed.”

Editor’s note: This is the second in a series of stories explaining local law enforcement use-of-force training and policies.

UK to roll out millions of 90-minute tests. Doctor says US could do the same

I think his most important statement was that he does not want those in the profession that don't belong in the profession. I hope that sentiment includes policies above and beyond basic psych evaluations. Also from what I understand a former employer can tell a potential employer whether or not an applicant has been fired or if they are eligible for rehire. If an officer applicant is not eligible for rehire or has been fired then the officer applicant should be required to explain why they are not eligible for rehire or were fired before being considered. I think statistics about the number of contacts and the demographics of all contacts should be public to ensure officers are not disproportionately focusing or harassing minorities. The tone of this chief does not leave me confident he is all about transparency and accountability. Many of his answers were equivocal. I would argue police departments like the military not only attract those with noble intentions but OFTEN attract in equal measure those with racist violent and aggressive tendencies. There is good cause for everyone to hold the police to a higher standard and those who do not measure up need to be weeded out with prejudice.