BG’s Bar-B-Que owner Bill Gordon gets by with the help of his current life partner Lori Fountaine. 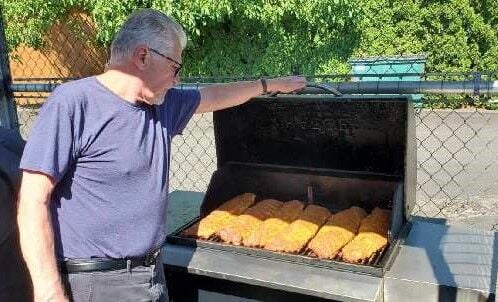 Bill Gordon checks on meat at his restaurant.

BG’s Bar-B-Que owner Bill Gordon gets by with the help of his current life partner Lori Fountaine.

Bill Gordon checks on meat at his restaurant.

While he loves what he does after years of fine tuning his craft, several issues are weighing heavily on whether he can continue operating the popular Monmouth barbecue restaurant.

It was a learning experience taking a risk opening an authentic barbecue joint that paid tribute to his Kansas roots. But after more than 30 years selling insurance in Topeka, he was ready for a change and moved out west where he loved the region after honeymooning here in his youth.

“My dad brought us up in the restaurant business. It’s in our blood, all the Gordon men cook,” Gordon said. “I wanted to do something. But everything I tried to do, I kept thinking, no, there’s already one of those. But there was an absolute dearth of barbecue places. I thought I knew barbecue. What I didn’t know, I can teach myself, since I have a basic knowledge. I knew just enough to be dangerous.”

He figured Kansas City style was ideal for the Monmouth area. Memphis and Carolina are renowned for cooking pork in different styles, Texas is more known for its brisket, and Kansas City is characterized for its wide variety of meats.

Although he was from the Kansas City area, Gordon said he was most influenced by the stylings of Texas pit master Aaron Franklin.

“I studied his techniques and bought his book. It’s very basic, using coarse salt and pepper. It makes a bumpy surface which allows smoke to better adhere to the beef. Gives it some flavor as well,” Gordon explained.

Launching the restaurant had to wait until recovering from surgery to repair a damaged shoulder nerve. Once ready, he began with a basic menu.

He began with country ribs, brisket, burnt ends and pulled pork. Through trial and error, he’d replace the country ribs with one of his current best sellers, baby back ribs.

“It was definitely an evolution. Some things were not popular or went over their heads,” he said.

Slowly but surely he started learning things more, studied more. He hired James Lemire who actually wanted to work for him, having once already started his own burger stand.

“He had a great entrepreneurial spirit. We started developing recipes together, researching, learning a lot more what we were doing. We put our heads together and brought burgers in. I was initially against it. We can’t bring burgers and barbecue together,” Gordon said.

“Of course they did,” Gordon recalled. “But it became a problem. It filled our grill with burgers and gave us greasy faces.”

The problems began to stack up with the expanding menu, trying to be everything for everybody. Running a restaurant meant managing a staff. Maintaining a motivated staff became the biggest challenge. The best workers moved on to pursue their own dreams. For example, Lemire left to finish school and became a police officer in Beaverton. To this day, Gordon can’t get anyone to work in fast food in the wake of the pandemic.

“It became you’re working so hard, you can’t see the forest but for the trees. Working hard, working hard, but never getting anywhere financially. You’re doing OK. But with employees in a market like this, there’s taxes, unemployment insurance, workers’ comp, and on and on,” he said.

In the meantime, Gordon said a funny thing happened. They gained a lot of popularity and he started gaining a brand from what they were doing. But BG’s popularity was a detriment during the pandemic that saw closures, re-openings, scaled back operations and re-closures.

“So, in the midst of a spike in COVID that limited dine-in eating, I decided to take a break. I got kind of fed up with everything,” Gordon said, adding they remained closed from November through the end of January.

Throughout it all, Gordon credits his sister, Marge Bower, who helped him launch BG’s as an homage to their dad. She provided a lot of the financial backing and is still his accountant to this day while living in Arizona.

By the end of January, he started getting itchy again. He re-negotiated rent with the building owner. And he’d return with a scaled back menu, going with straight barbecue, no specialty sandwiches, no burgers.

“While COVID was still going on, we’d hear, ‘We’re so glad you’re back.’ I never knew I had so many friends. ‘We missed you during the pandemic.’ I was here for most of it. I don’t know where you’ve been,” Gordon said.

“Right now, it’s tough on me. Because I’m it. If I’m not here, the place doesn’t run,” Gordon explained. “I don’t have a cook. I have a very little margin of error. I’m here at 8, lucky to leave at 7. It makes for a pretty long day. It can grow on you a little bit.”

While he’s got the smoking technique down pat, the key is whether or not they can make a profit in this market.

“I’ve got it down to a science now. But I’m doing the same thing over and over. I’m like McDonalds, producing the same product. That’s what people want. These kind of ribs. This quality of brisket. Doesn’t leave any room for experimentation, that would add some variety, spice of life,” he said.

People still support them and give a lot of compliments which is gratifying. But Gordon can no longer work out front and greet customers being buried back in kitchen.

Additionally, Gordon doesn’t know how much longer he can hold out actually giving his loyal customers what they want. Shortages have caused meat prices to double over the last month. He remains understaffed. And on top of all that, the owner is thinking about selling the place.

“I don’t even know if in a couple of weeks that’s going to chop off my head or not,” Gordon added.

He’s exploring other options should the location be sold. In the meantime, Gordon doesn’t want to quit.

“Obviously I love it, or I wouldn’t be here now. That’s what’s kept me here,” he said.

“The more and more people you reach, the more will know you. That story is not over yet. It seems to be getting close. It depends on if my health holds out and whether we both still want to do it. Without Lori’s support I can’t do it,” he added. “We’ll see what happens.”

Lindsey Graham picks side in Trump vs. McConnell divide