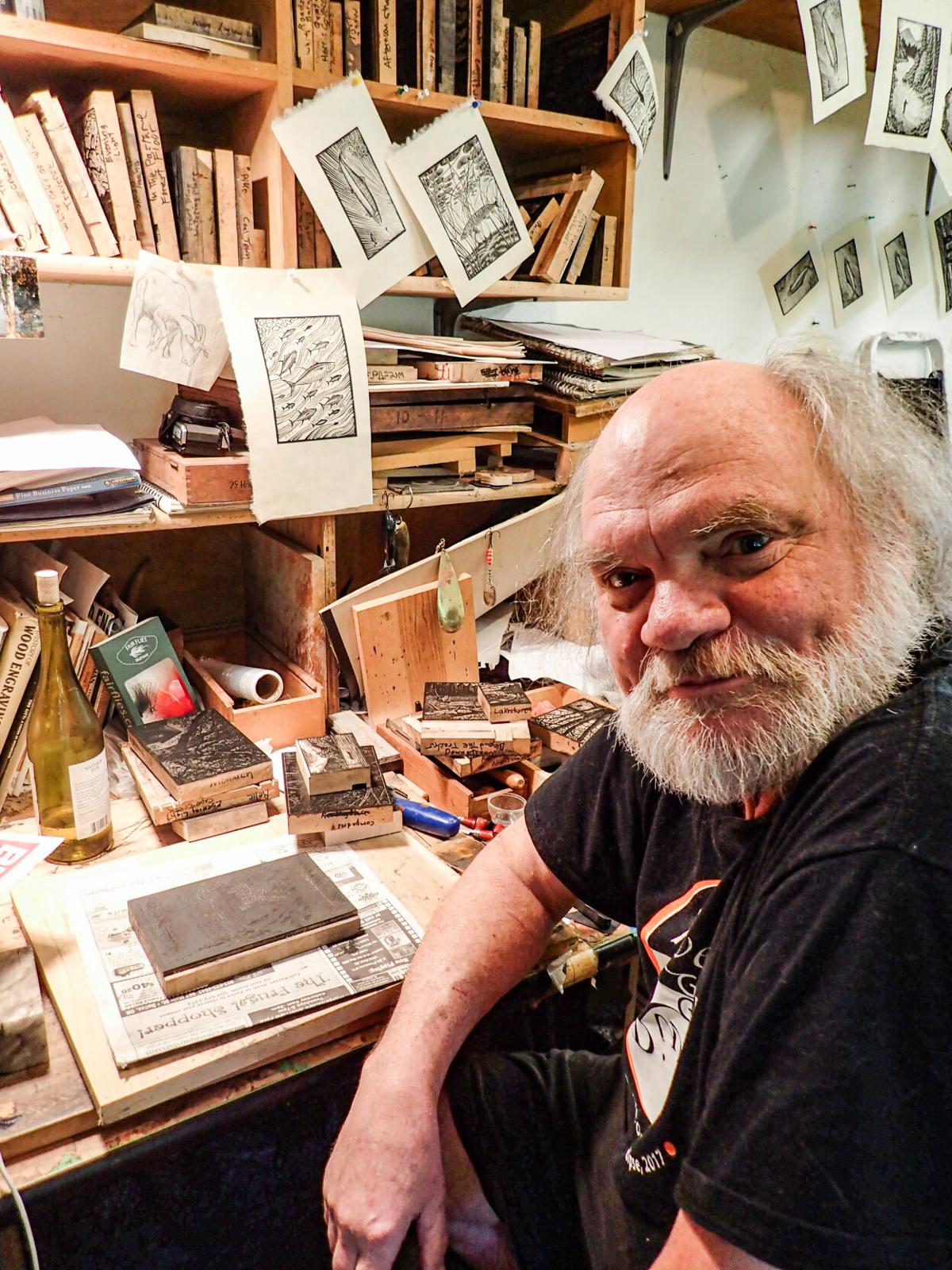 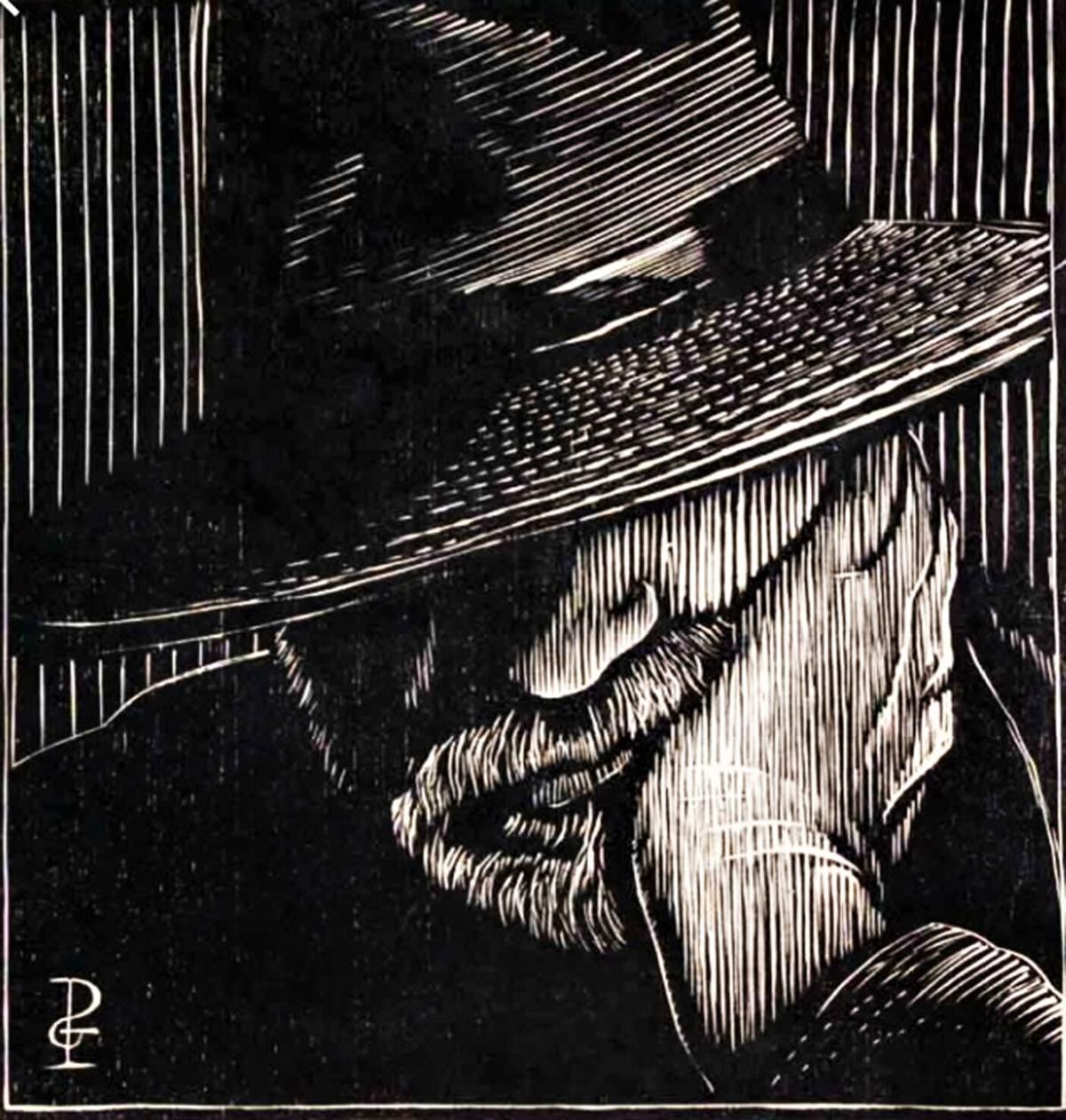 A self portrait done by Paul Gentry.

Independence artist Paul Gentry died Aug. 30 at the age of 65.

“Paul mastered everything he touched,” says River Gallery partner, Richard Bunse. “He was an exceptionally fine painter, photographer, woodworker — and his wood engravings are brilliant.”

Paul was a nationally recognized wood engraver whose prints have been collected by the Portland Art Museum, The Nelson-Atkins, Library of Congress, Smithsonian, Whitney and Guggenheim.

A master artist and admired intellectual, Paul remained an unpretentious man. Tall, big-boned, balding, and bearded, with a penchant for sweatpants, sleeveless t-shirts and moccasins, he lived on modest means with his cats in the house he owned on South Fourth Street in Independence. He remained close to his only sibling, Karen, a retired nurse.

“Paul was such a dear man, so smart and funny,” says long-time friend, Christine Hannegan. “We’ve lost a beloved soul.”

Paul S. Gentry was born in Decatur, Illinois, to June and Clayton Gentry on December 13, 1954. The family moved often to small towns in Idaho and Oregon, following the father’s work as a manager for King’s Variety Stores. Paul often talked about a wonderful boyhood year in Warrenton at the mouth of the Columbia River.

“My Uncle Dave was a bar pilot and he showed us all around the waterfront.”

Paul remembered some of the last days of whaling in America. “As kids, we watched them bring in and flense a sperm whale. It was gross but interesting.”  This lifetime fascination with nature and industry, combined with an unflinching eye for authentic detail, deeply informed his art.

The Gentry family moved back to Illinois and then Colorado Springs, where Paul attended high school.  “He excelled at art, music, loved to read, but hated structured classes,” his sister, Karen, remembers. He dropped out of high school, earned a G.E.D. and took welding classes at the local community college, becoming an expert welder, and working in a steel mill in the Chicago suburb of Lansing, Illinois.  “Paul loved Chicago—the architecture, museums, and culture,” Karen recalls. “He wandered all over, taking photos and making sketches.”

Disenchanted by work in the steel mill, Paul moved to Seattle and joined a friend’s small furniture factory, learning skills that he would later use to create his own exquisite jewelry boxes, cabinets, and tables.

In 1985, Paul began working for Daniel Smith, a Seattle art supply manufacturer. Intrigued by the milling and mixing of pigments, he soon became a trusted tester of new paints and inks. At Daniel Smith he also met his wife, Peggy Ashcroft. In 1998, she and Paul moved to a rural property outside Monmouth. Richard Bunse remembers meeting Paul shortly after he arrived in the area: “I was amazed by the range and quality of the work.” Bunse encouraged Paul to join River Gallery in 1999, where he remained a member for twenty years.

Paul worked in several artforms, but “my passion is the woodblock print,” he wrote in an artist’s statement. “The physical act of cutting a design into a block and seeing the stark clarity of the print excites me like no other medium.”  Influenced by the Depression-era American realists, Paul rendered many rural landscapes—old houses, farms, pastures, livestock and detailed trees and birds. He was also drawn to industrial forms and intricate metal structures, such as grain elevators, airports and bridges, as well as the human figure.

“Gentry had a masterful control of composition and captured the dynamic play of light and shadows so effectively,” explains Western Oregon University art professor, Rebecca McCannell. “River Gallery lost one of its stars.”

Producing nearly a 100 woodcuts and engravings, he received top awards from the American Print Alliance and Library of Congress, and was collected widely by some the nation’s best museums. Paul received commissions from local wineries, universities, and publishers.

I was fortunate to work with him on several projects, including two Everyman’s Library anthologies of angling literature. We fished together a few times and he took photos and did follow-up research. The finished images were brilliant. The art director at Random House thought they were some of the best engravings he’d ever seen.

In addition to being a successful artist, Gentry was a mentor to others.  “Paul was key in leading me to believe in myself as a photographer,” says Laurie Chambreau. “He told me to ‘Trust what you see and how you see it.’”

Gentry was also self-taught intellectual who could speak on many subjects with knowledge and understanding. “He was a thinker,” says the ceramicist, Gerry Brehm. “And he loved to talk, laugh, eat and drink—and drink.” He made no apologies for a lifestyle of excess—art and wine were his great passions. One of Gentry’s favorite bits of advice was from Hunter S. Thompson: “Buy the ticket, take the ride.” And so he did.

September ends with heat wave in the West

25 terms you should know to understand the gun control debate