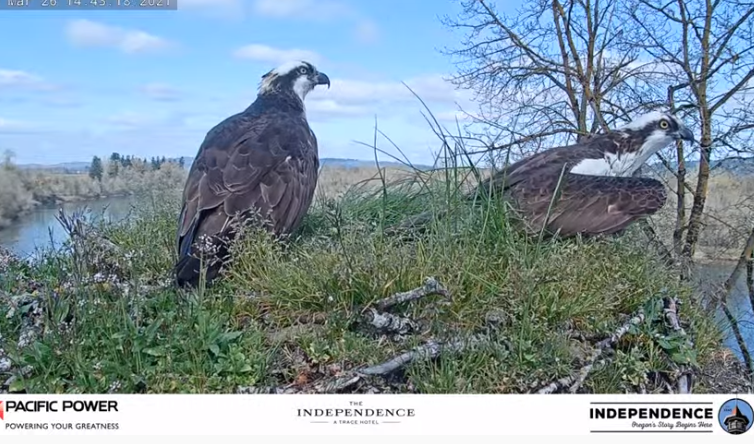 An unnamed suitor tries to get the attention of Olga the Osprey at the nest set up in the city of Independence. 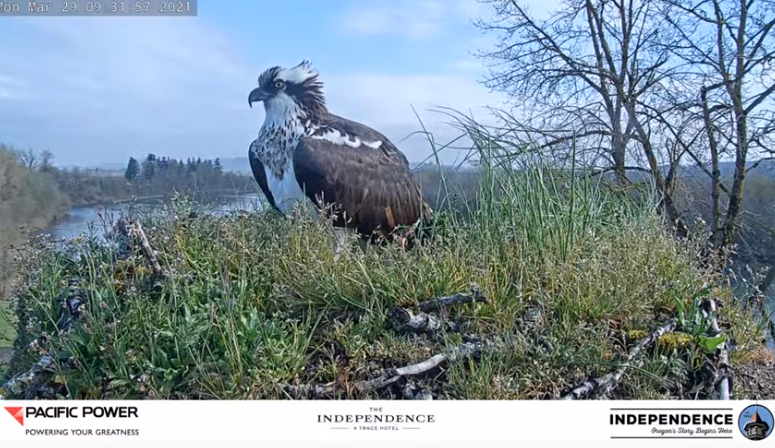 Olga the Osprey returned to the nest in Independence March 22 so the city turned the live stream camera back on to capture her daily activities. 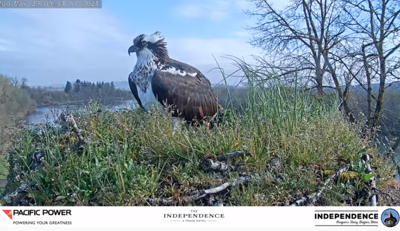 An unnamed suitor tries to get the attention of Olga the Osprey at the nest set up in the city of Independence.

Olga the Osprey returned to the nest in Independence March 22 so the city turned the live stream camera back on to capture her daily activities.

INDEPENDENCE — A local, live feed on YouTube last year became an unexpected viewing phenomenon during the pandemic while much of the entertainment industry was shut down.

Season two of must-see TV kicked off March 22 when the osprey Olga returned to the nest atop a pole in Independence. And the show’s main star has already attracted a young suitor for this year’s storyline.

Like any good soap opera, season one ended in tragedy and viewers are returning in the hopes of a happier ending.

Rather than network executives pitching a story, the Independence City Council and Mayor John McArdle had talked about wanting a live stream of the osprey nest after the birds were known to return for more than a decade. City IT manager Jason Kistler partnered with the Independence Hotel to move the nesting pole further away from building and Pacific Power helped get him 100 feet in the air to set up the camera.

Kistler said once the pandemic hit at the end of March, viewership really took off.

“We probably had 100 watching concurrently every day,” he said. “A dentist office played the live stream in their office to help calm the patients down during procedures.”

Kistler added by season’s end, they had logged 85,733 viewers, some from as far away as Scotland.

“I needled the city until the let me do it,” she joked.

Gaston, a 76-year old retiree and unpublished novelist, has been studying ospreys since 2014, when she began watching live camera feeds of the regal birds in Maine on Audubon’s website explore.org.

“I was glued to the camera,” Gaston said. “The year after that, I went to their camp on Hog Island to study raptors with world-famous experts. It transformed me. I will forever love ospreys.”

She became glued to the exploits of Olga and Ollie, the unofficial names the staff at the Independence Hotel gave the local osprey that stuck.

Unfortunately, viewers witnessed the darker side of nature. One day, Ollie never returned. Gaston said experts surmised he met his ill-timed fate by a larger, predatory bird, such as an eagle, or through an accidental death.

Without the aid of Ollie to help nurture the eggs she’d laid, Olga abandoned the nest.

“This is real life, anything could happen,” Gaston said. “I went down to the river and sat there. She was calling, making wide circle of flights over the river and calling for Ollie. No one ever heard another call back. So she determined it was done. It is nearly impossible to do it by herself. It’s what happens. This is the downside of watching these birds. People got so upset.”

That’s why she is particularly excited to see Olga has returned to the nest right on time this year. The osprey usually head south to Mexico in the offseason, and it seems two young males have made their way north to Independence as well.

“There’s been a male identified as New male No. 1, who’s been dancing around her,” Gaston said. “She hasn’t dated in a while, so she has to learn to do this all over again, how to get a suitor.”

She added a courtship is wonderful and messy.

“Any male has to start bringing nesting material, possibly fish, to show her he knows what he’s doing,” Gaston explained. “She’ll accept or send him off.”

During the courting ritual, the male lands next to the female, turning his back to her, with his hunch down and wings out to the bottom of the nest. Gaston said this is a submissive behavior, saying, “Hey, give me a shot, lady.”

That appeared to have happened on March 24.

“She seemed to accept him. He relaxed and they just stood there,” she said.

If the courtship blossoms, it could be must see TV viewing all summer. The courtship could last about a month, with the first batch of three or four eggs appearing by April 21. Osprey eggs have a 37- to 38-day incubation with the hatchings usually occurring in the same sequence as they were laid.

Gaston said the eggs are a beautiful beige color, and splotched in patches of brown to light reddish brown.

“They will not leave the nest until late August to early September,” she added. “We’ll probably be out of quarantine by then.”

“I suspect, like any study of nature, anything you study, there’s endless things can learn about it. That’s my joy,” she said.

If you can’t get enough of as the world turns around the days of the lives of Olga and her new bold and beautiful beau, Gaston recommends checking out Dallas bloggers Janet and Jim Scott who keep track of a census of other local nests at cascaderamblings.blotspot.com.

Attorney for Gaetz associate: I'm sure Gaetz is not feeling very comfortable