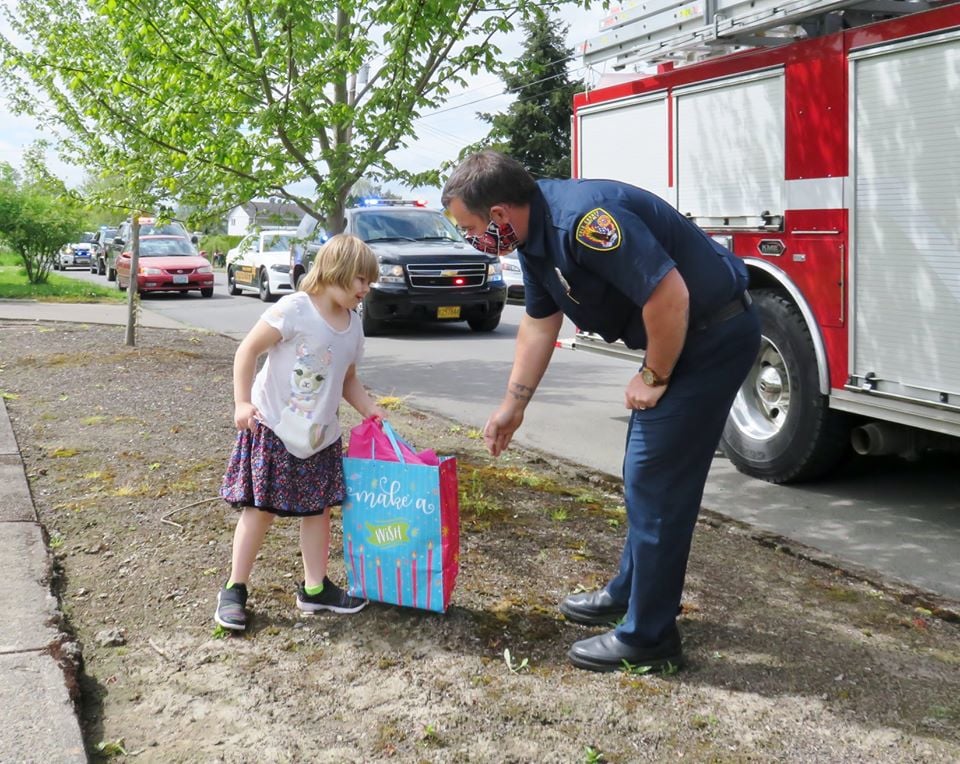 Troy Crafton delivers a gift to a birthday girl in Independence on April 28. 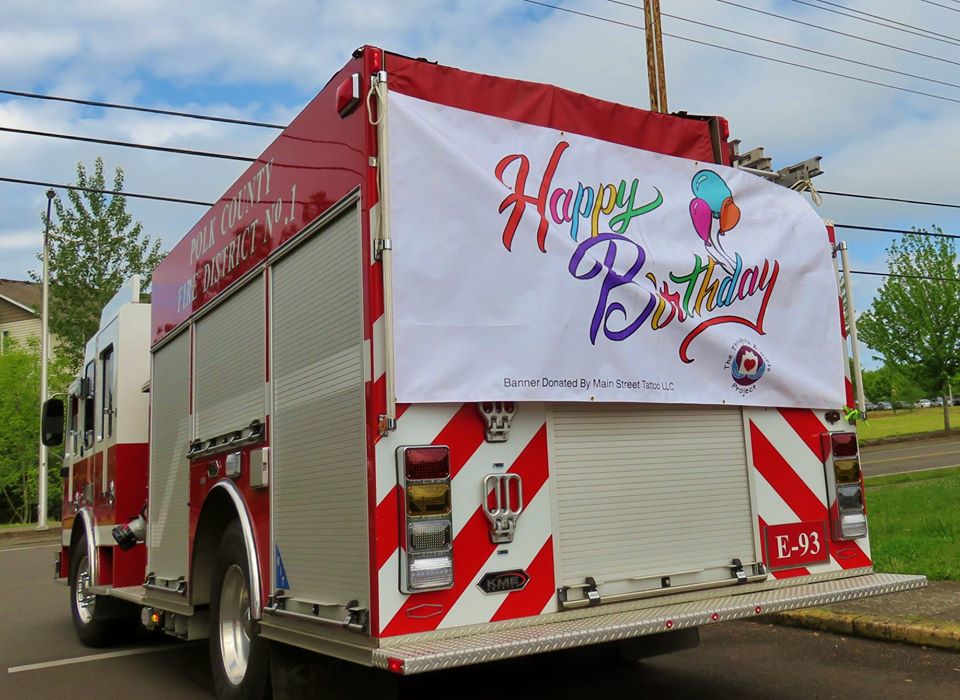 First Responders in Polk County are delivering birthday gifts and parades through May.

Troy Crafton delivers a gift to a birthday girl in Independence on April 28.

First Responders in Polk County are delivering birthday gifts and parades through May.

POLK COUNTY — On Tuesday mornings at 10 a.m., a red fire engine pulls out of the Polk County Fire District No. 1 parking lot, accompanied by Independence and Monmouth Police cars, and begins its drive down that day’s designated route.

Yes, these first responders are answering a call, but instead of rushing to an emergency, they’re dropping presents off for a birthday boy or girl, parade-style, complete with whirling lights and sirens.

Since April 14, the Independence and Monmouth Police Departments, and Polk County Fire have been working with Jean Love, owner of the non-profit organization Thoughts and Gifts, to deliver birthday gifts to underserved Polk County youth.

Love, who created Thoughts and Gifts in 2018, was thrilled when Independence Sargent Tino Banuelos contacted her, asking how he could help.

“It started when Sgt. Banuelos emailed me asking if there was anything the Independence Police Department could do to help with the Thoughts and Gifts Project during the ‘shelter-in-place restrictions,’ Love said. “And in his email he went on to say, ‘could we do any deliveries of birthday presents, to drop it off at someone’s house?’”

Banuelos said at first, the IPD was the only department involved.

“This was something that Thoughts and Gifts and I were talking about on a small scale, including just Independence, initially,” Banuelos said. “We just thought that, being the police, that we were already out and about and could help facilitate the delivery of gifts from the Thoughts and Gifts Project and act as a delivery service for them.”

At the same time, Polk County Fire was wondering what it could do for the community during this time. “And so they reached out to us, and the three of us — Polk Fire, Thoughts and Gifts, and Independence police — collaborated,” Banuelos said. “From that point on, Polk Fire was tasked with taking lead on this and  Fire Chief Ben Stange just ran with it, once we were all on the same page.”

“I wanted to help promote (Love’s) project,” Crafton said. “I love kids, that’s why I was doing the public education stuff. Doing the parades was my way to help out with things and do outreach to the community.”

From there, MPD also got involved.

Last week, an Oregon State Trooper joined the entourage; occasionally a Polk County Sheriff’s car will be in the mix.

So far, the community response has been positive.

“I get lots of reviews back and private messaging on Facebook, people say it’s great,” Crafton said. “People just walking down the street when we’re out doing the parades and they realize what we’re doing, then they’re waving and giving us a thumbs up.”

Crafton hopes this outreach is also showing the kids that police officers and firefighters are not scary.

“Just reminding people that we’re here and we’re here to help,” he said.

The Tuesday morning parades will continue through May, beginning at 10 a.m. Sometimes, there will be one birthday delivery, other times there are multiple stops. It depends on the day.

All of those involved in the parade adhere to the social distancing measures put in place.

“April was our busiest month, and we served 26 people, almost one per day,” Love said.  “March, I feel like we were between 18-22, and then so far this month I think there have been six or seven. All together for the year we have served 70 people between youths and seniors.”

It’s not just the families and the kids being delivered to who reap the benefits of this outreach.

“The day I did it, I felt so good about it, after work,” Banuelos said. “We can sometimes get stuck here in our offices or stuck out on calls, and a chance to get to see these little smiling faces is definitely uplifting for us as well.”

The Thoughts and Gift Project serves seniors 65 and older, and youth 0-18 in Polk County.

Before the restrictions put in place by Gov. Kate Brown, parents would typically come pick up the gifts for their kids, Love said.

“With COVID-19, we quickly realized it would be easier for families if we could deliver,” Love said. “So we wanted to help abide by the restrictions. So with shelter-in-place and practicing social distancing and all of that, we started doing more deliveries to accommodate people’s needs.”

While the parade put on by the police and fire departments are two separate ideas — you don’t need to have a birthday going on to request a first responder parade — they often coincide.

“Right now, through Polk County Fire  there is an online form that anyone can submit for the parade,” Love said. “They don’t have to be recipients of the Thoughts and Gifts Project — they can be — but the parades are open to anyone in the community.”

Those wanting gifts delivered can contact Love at ​info@thoughtsandgifts.org, or call 971-600-5026.  For parades, go to the Polk Fire website  ​www.polk1.org​ and register there.

Not only is this outreach benefiting the Thoughts and Gifts Project by increasing its awareness, it’s allowing the community to interact with first responders in a positive way, Love said.

“It’s a great opportunity for the community to see the police department and fire department,” she said. “Unfortunately, a lot of times when we have interactions with police or fire, it’s not necessarily for the most positive reasons, and this is a great community opportunity for them as well to help build that positive outreach. And for all of us to work together to bring some joy and some smiling faces in what is definitely a challenging time for many.”

She said she’s happy that Thoughts and Gifts can be a part of it.

“It has been very enjoyable,” she said.  As for what this looks like for the non-profit moving forward, “I don’t have an answer for that,” Love said, laughing.

Trump via Twitter: Republican convention not happening in North Carolina

Esper: I do not support invoking the Insurrection Act