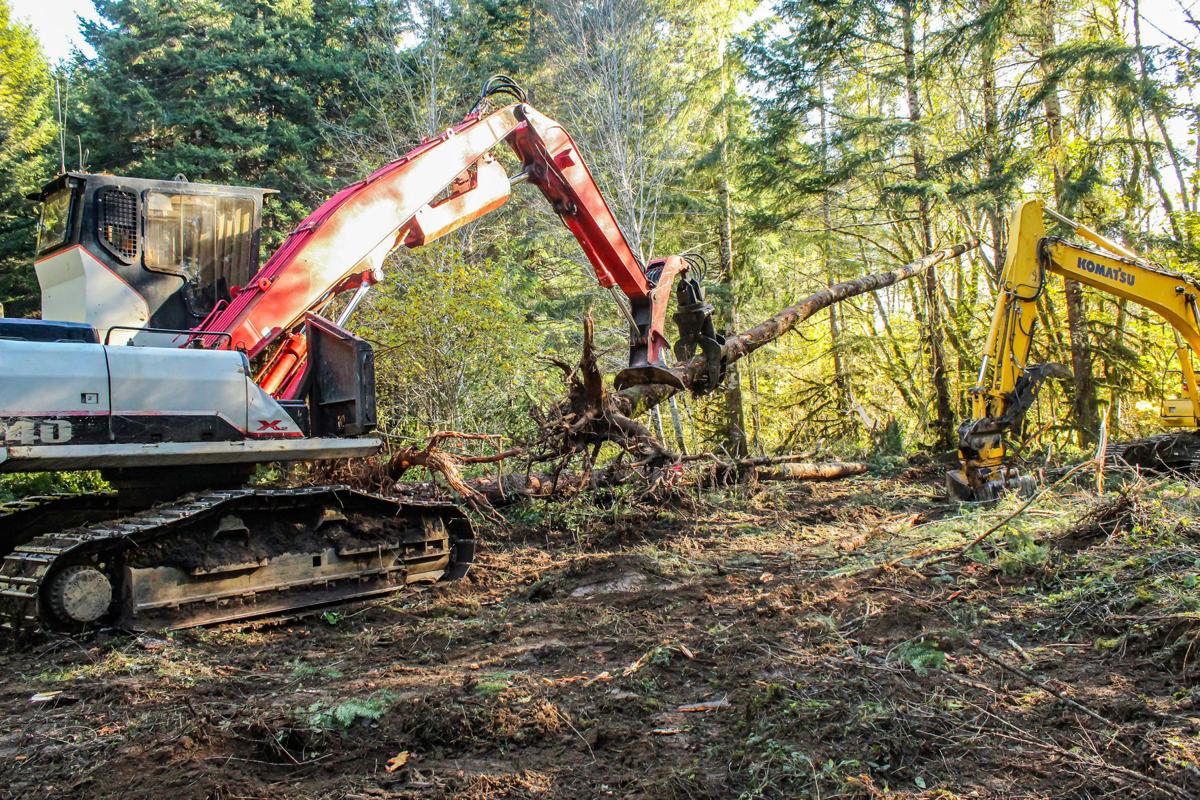 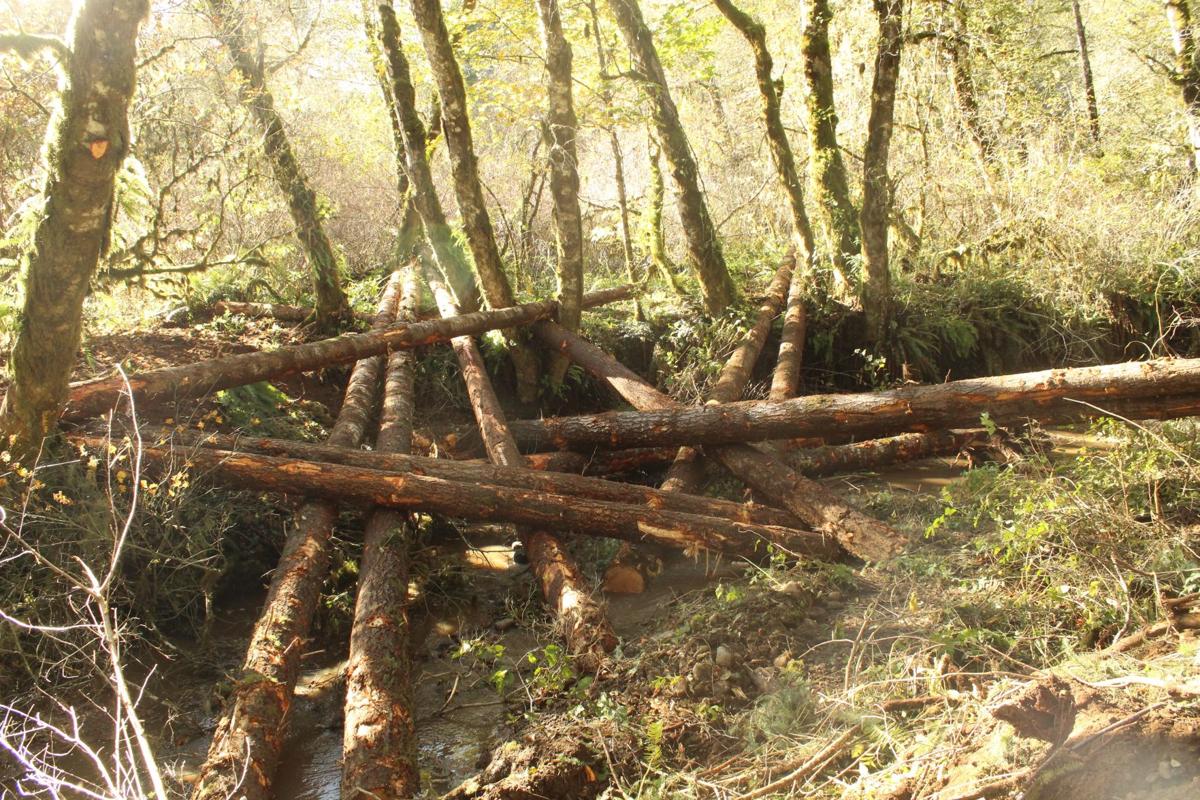 A finished log jam structure includes several logs stacked in a tangle in the creek. 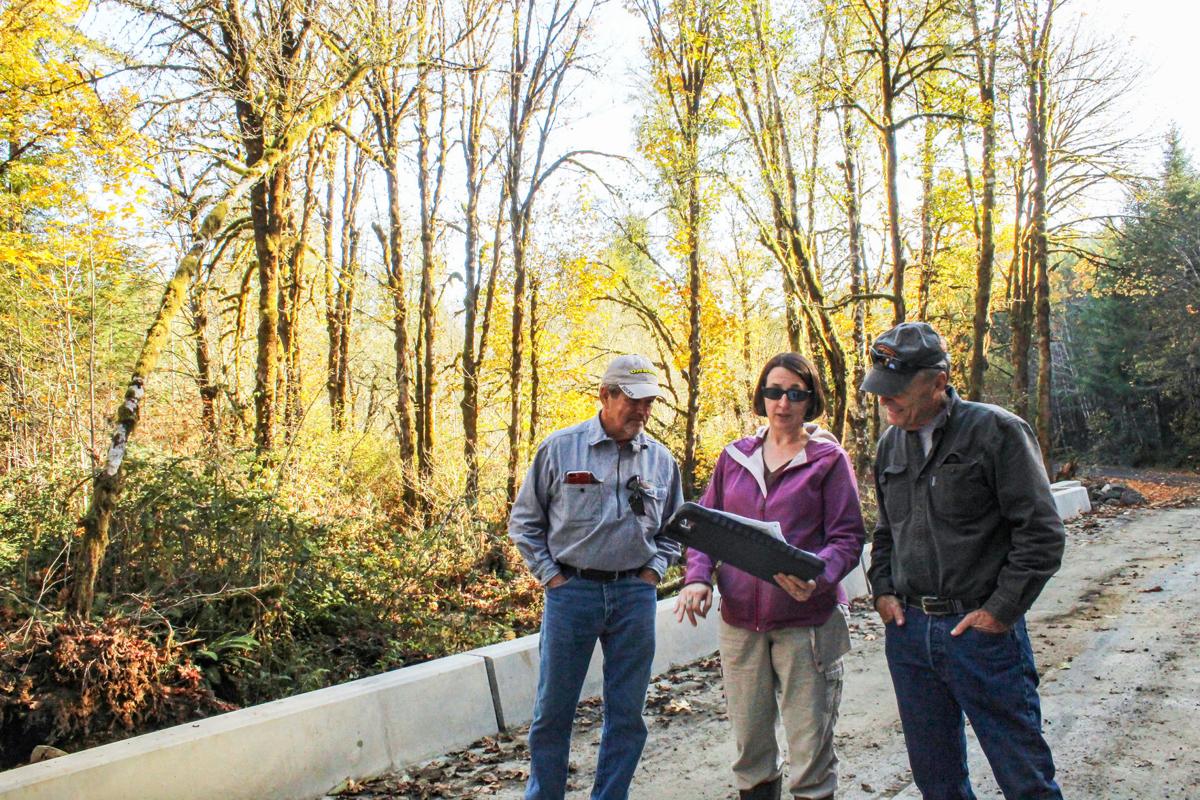 A finished log jam structure includes several logs stacked in a tangle in the creek.

PEDEE — Last week, Josh McLane was helping put the finishing touches on what he called “a work of art” in South Fork Pedee Creek.

McLane, with Mike Adams Construction, was part of a team of two excavator operators and a biologist placing log structures in the stream to restore the creek to suitable habitat for salmon and trout.

“It’s something different for us. It’s putting back into the environment, for the fish,” McLane said. “It’s really cool.”

The project is a collaboration led by the Luckiamute Watershed Council, which brought together two commercial logging companies, Starker Forests and Hancock Forest Management; a non-profit, Forests Forever; the Bureau of Land Management; and a private landowner to complete the restoration.

“We can bring everybody to the table and say OK guys, how can we make this work?” said Kristen Larson, the LWC executive director. “Who can get what? And we can get a grant for the difference.”

Oregon Watershed Enhancement Board awarded the LWC a $121,684 grant to pay for what wasn’t covered by the partners, and for monitoring the success of the restoration work.

Jennifer Beathe, a forests engineer with Starker Forests, said commercial operations often use their own resources to do similar project. She said the Pedee Creek work furthers that objective.

“Developing a partnership on this project with other landowners, such as Hancock Forest Management, Forests Forever, and the BLM, along with the Luckiamute Watershed Council is a win-win for fish and aquatic species in the Luckiamute watershed,” Beathe said.

The project has or will replace two undersized culverts that are in danger of failing and block fish; place 22 large wood structures – several logs stacked on top of each other -- to create better fish habitat; and replant the stream banks with conifers where needed on the three-mile project zone.

“These riparian areas historically would have large conifers, but before the Forest Practices Act, you could harvest large conifers to the creek’s edge, and a lot of times they didn’t grow back,”

She said planting conifers will both help cool the stream and provide for nature log jams in the future. Fir trees perform that job better than the hardwood trees that dominate the stream banks now.

LWS council started discussions on a project to restore habitat on the creek about five years ago. Larson said the council wanted to replace the two culverts — pipes that allow water to pass under roads — with more fish friendly bridges.

She said one culvert failed in a storm in January 2012 and had to be modified to make it functional again. It was replaced with a bridge in September.

“Above it is another culvert that is incredibly undersized, a total barrier to fish and blocking a lot of a stream gravels and sediment and stuff from moving,” Larson said. “So, it’s terrible for the creek, terrible for fish and not good for the road, because one day nature is going to decide it’s just way too small.”

This month, 22 log jam structures, made with about 300 logs, were placed in the stream. They look like a tangle of logs that fell into the creek, but were purposefully designed by the biologist.

“All the logs were free to the watershed council,” Larson said. “We didn’t have to get grant money or buy the material. Everybody donated it.”

She said the logs come from different BLM, Starker and Hancock operations — or from close to the project area on Forests Forever property.

The organization has a working demonstration forest in Pedee.

“They are based out of Clackamas, and they promote sustainable forestry, working forests and they teach high school students about forestry,” Larson said.

Larson said the structures will alter the stream flow to create pools and gravel beds that are healthy for fish.

She said the stream is already suitable for fish, but the project will make it better for the Coho salmon, steelhead, cutthroat trout and Pacific lamprey that use the creek.

“In the summer, the temperatures are OK for fish, but they could be better,” she said. “We aren’t leading them to a bathtub. We are leading them to suitable habitat, but we can make it better.”

The project could create pools that will save as a harbor for young fish, protecting them from the current.

“The fish find the good spots. They know what to do,” Larson said. “They will find what works for them. We just need to give it to them to find it.”

For more information on the project, go to www.luckiamutelwc.org.