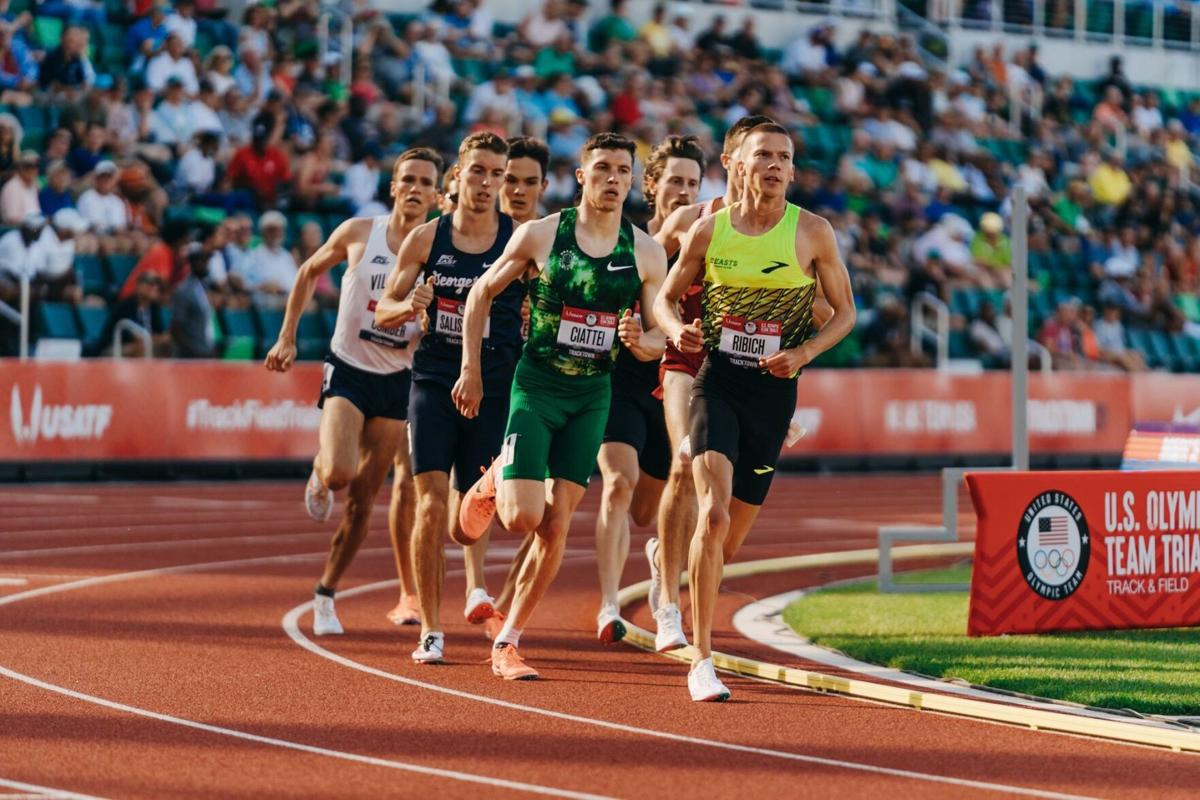 David Ribich leads the pack during the US Track and Field Olympic Trials held in Eugene. 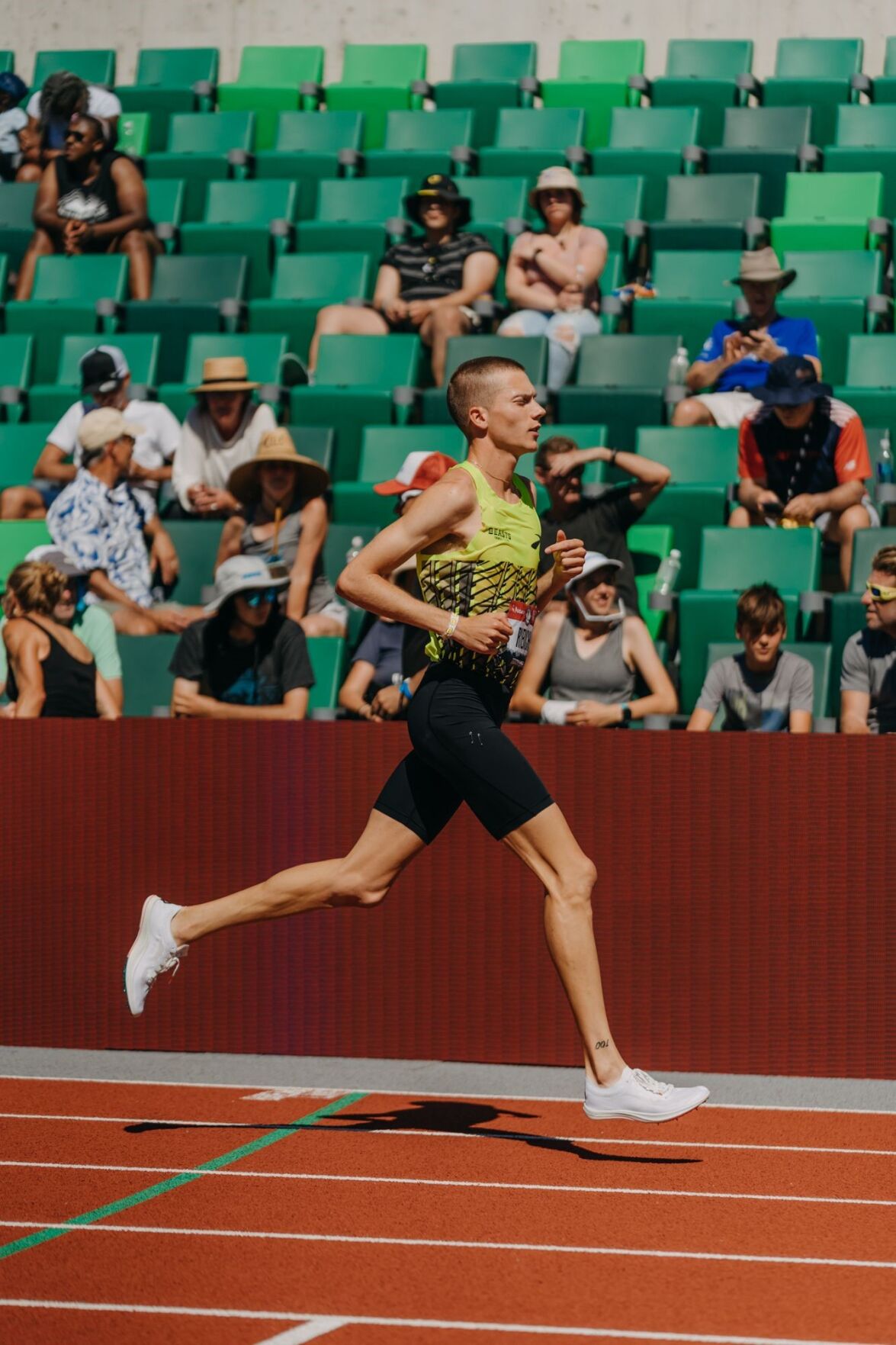 David Ribich runs at Hayward Field at the University of Oregon at the U.S. Track and Field Olympic Trials held in Eugene.

David Ribich leads the pack during the US Track and Field Olympic Trials held in Eugene.

David Ribich runs at Hayward Field at the University of Oregon at the U.S. Track and Field Olympic Trials held in Eugene.

EUGENE — On June 27, David Ribich found himself toeing the line of the final 1,500 meters race of the U.S. Track and Field Olympic Trials, shoulder to shoulder among athletes he’d been looking up to since he was in high school.

As he prepared for one of the biggest race so far of his young career, Ribich said he was thinking about what he had to do.

“Okay, so I made the final, and what are the odds of me making it? They’re pretty low.” Ribich said. “I have to finish in the top-three and get the Olympic standard. My race plan was to go out right out front and unfortunately, at the 800-meters, I had played all my cards and Tokyo was off the docket.”

Ribich finished the race in 3:44.43, and while it wasn’t his best time, he was realistic going into not just that race but the experience as a whole.

“We went into the weekend knowing Tokyo was likely not going to happen, and so I think that actually freed up a lot of pressure and expectations for myself, and I was able just to do what I love to do — which is compete,” he said. “I fell short a little bit on the final day to Tokyo, but overall it was such a positive experience and everything I wanted to experience at an Olympic Trials.”

In the semi-finals the Thursday before, Ribich crossed the line in 3:38.56, finishing the three and three-quarters-lap race with a season best and propelling him into the finals.

The Western Oregon University alum was a four-time Division II National Champion who helped to claim gold in the Distance Medley Relay during the indoor track and field season in 2017, and also set DII national records in the 1,000-meters, the indoor 3,000 meters and the outdoor 1,500 meters over the course of his time as a Wolf.

Shortly after graduating, he signed a contract with Brooks, a running company based in Seattle, Wash., in 2018.

The 10-day trials event was held in the newly renovated Hayward Field in Eugene from June 18-27, and Ribich said part of his experience at the trials was being there and being around large groups of people for the first time in 18 months.

“So being on the start line and seeing all the fans in the stands was super exhilarating,” he said. “And being from the state of Oregon, I felt like there was a special kind of energy. I know people refer to it as Hayward magic, but I think the fans that go there and support the athletes make it that way, because with the new renovation, it feels like the fans are on top of you cheering.”

Running the 1,500 meters event wasn’t in the original plan heading into the trials.

“I went into it anticipating running the 5,000-meters” Ribich said, laughing.

He ended up not getting into it and stuck with the 1,500, “which in hindsight was actually the best-case scenario, because the weekend was so much fun doing the 1,500,” he said.

Being in race he hadn’t planned for also helped to ease the nerves, in a way.

“I was nervous, but more so excited,” Ribich said. “Going into the 1,500, I felt no pressure. It was like, ‘OK, you’re going into this race, this isn’t what you planned to do, you have zero expectations, nobody expects you to do anything.’”

Making it to the trials means being among some of the best athletes in the nation. Ribich said he and his sports psychologist talked a lot in the weeks leading up to the trials about what he wanted out of the overall experience.

“I wanted to express myself in every way that I can that’s true,” he said. “On the start line, my No. 1 priority was to acknowledge the fans and also smile, which sounds dumb, but I just wanted to smile.”

Plenty of races are ahead of Ribich for this season, starting off with a race in California, on July 18. His long-term goals are the world championships and, of course, the 2024 Olympics in Paris, France.

“I just want to thank everyone from Polk County and Monmouth who came down and supported me during this time,” Ribich said.