Starting at
$40.00 for 365 days
Get Started
View all rates
You are the owner of this article.
Edit Article Add New Article
Home
News
Sports
Opinion
Lifestyle
Obituaries
Events
Special Sections
Classifieds
Contact Us
1 of 3 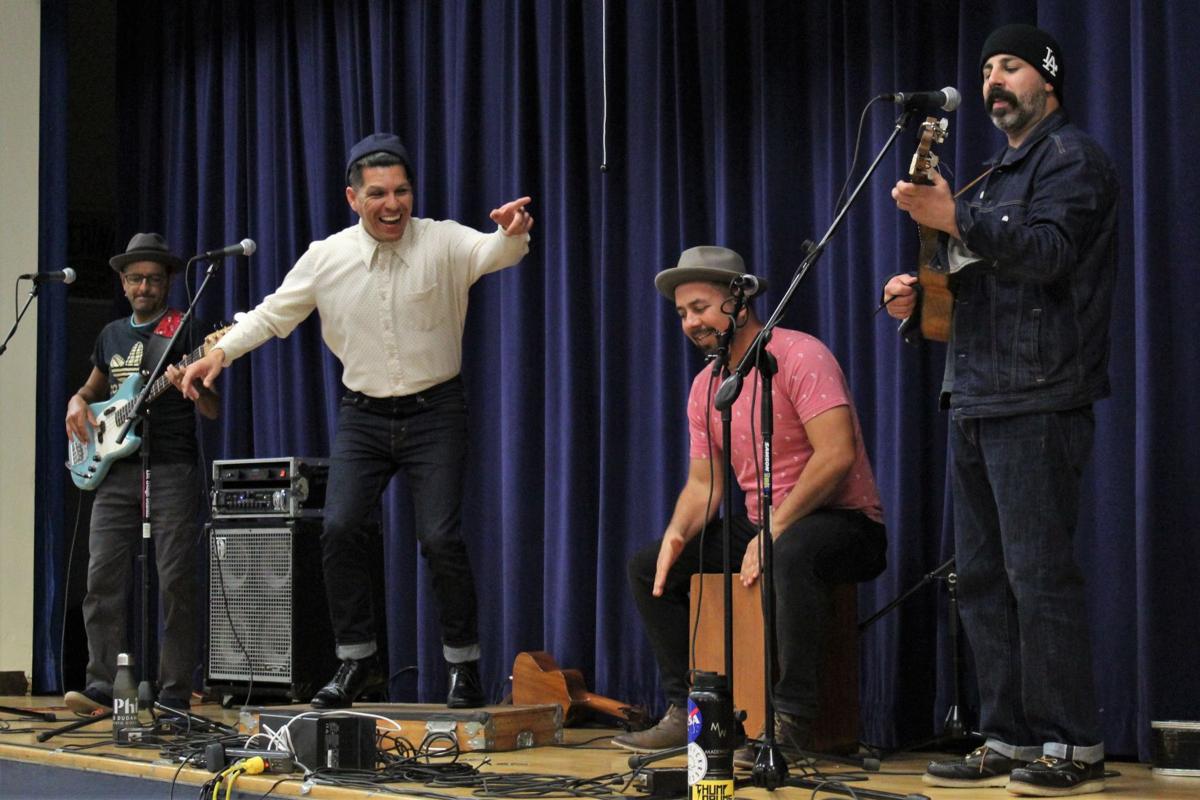 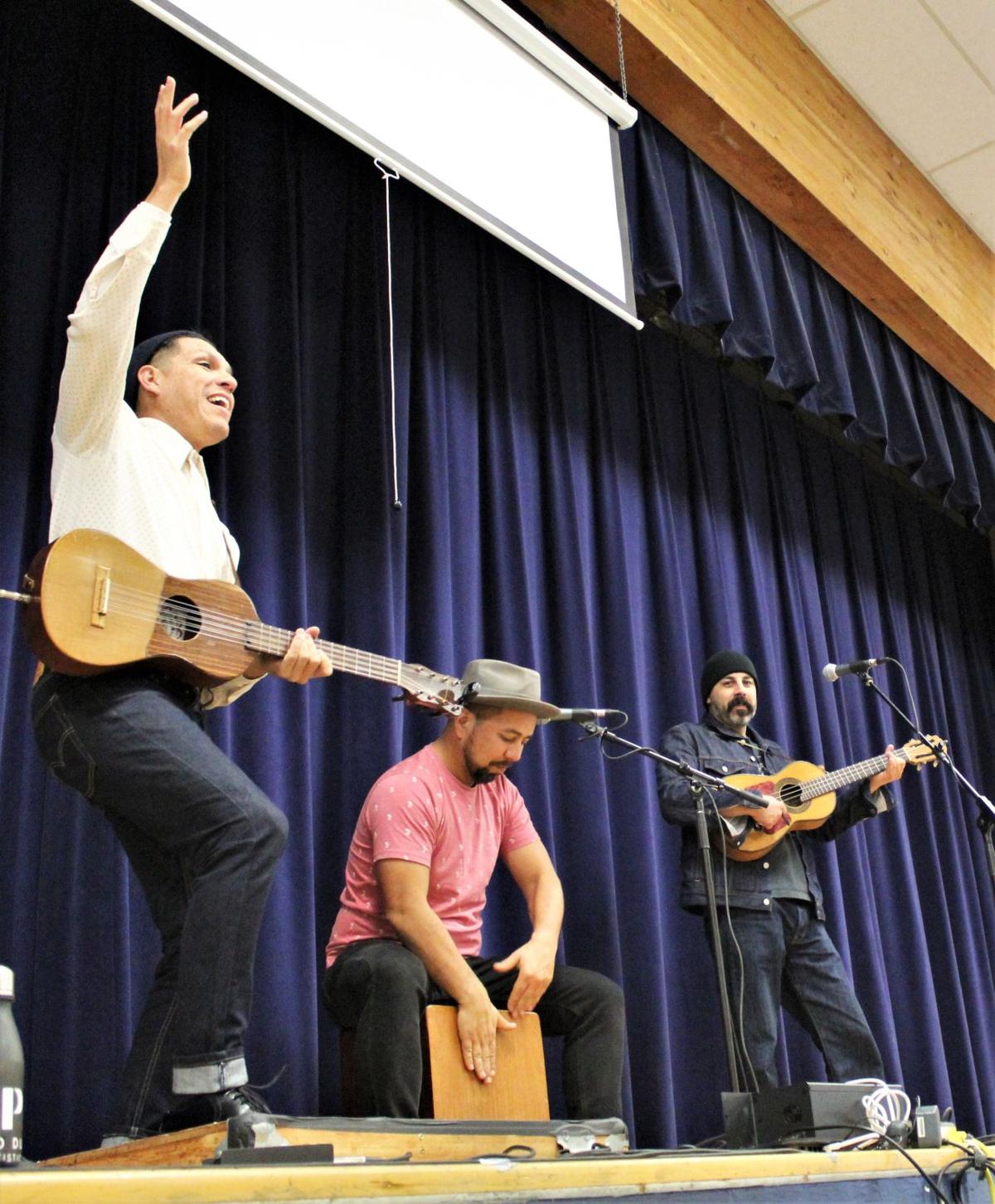 Las Cafeteras play a song for students in the after-school program at Talmadge Middle School. 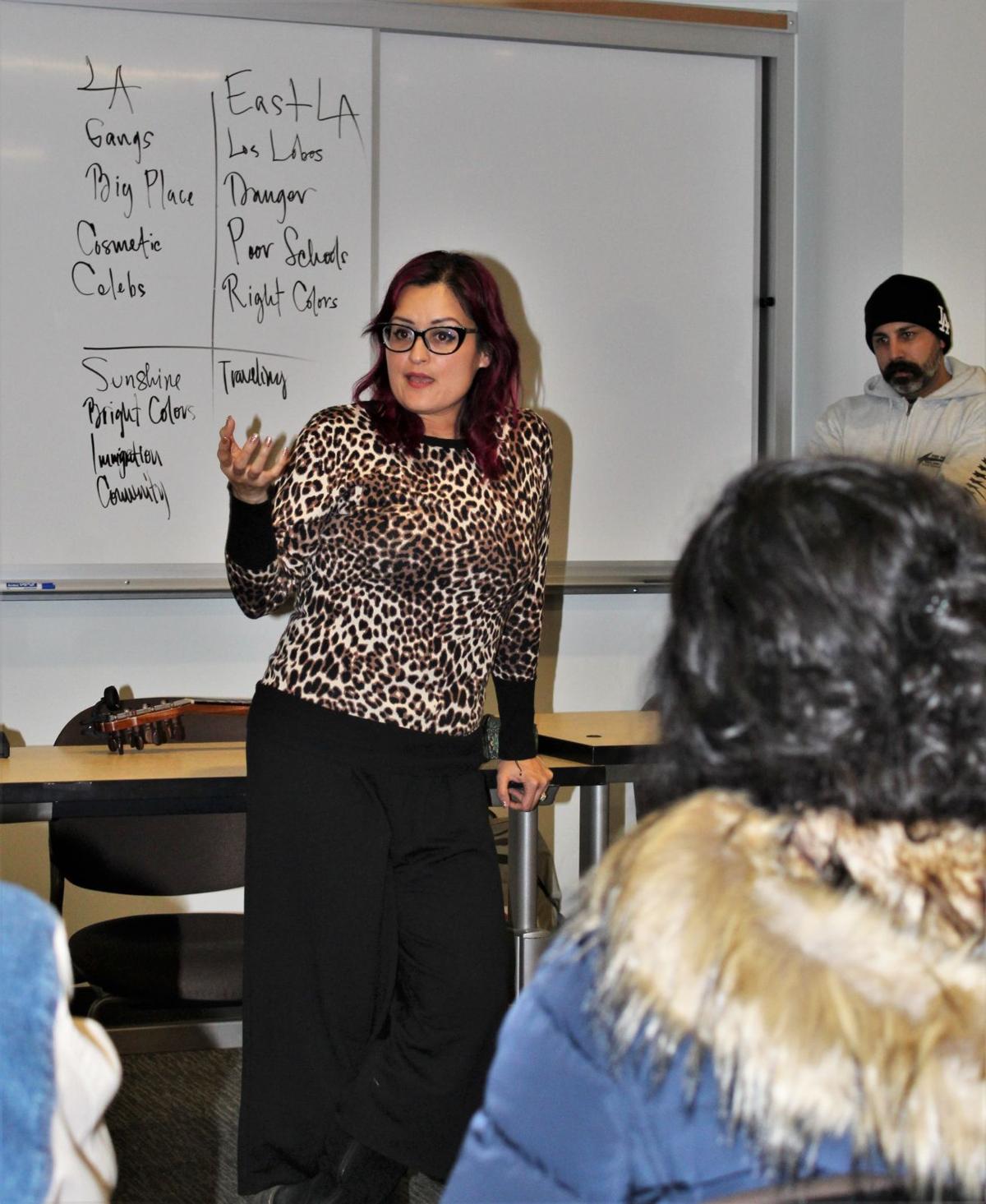 Denise Carlos talks about the importance of sharing stories at a workshop at Western Oregon University. 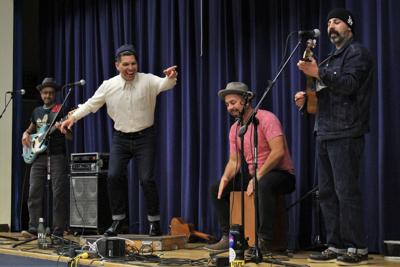 Las Cafeteras play a song for students in the after-school program at Talmadge Middle School.

Denise Carlos talks about the importance of sharing stories at a workshop at Western Oregon University.

MONMOUTH — Everybody has a story. The members of Las Cafeteras use music to tell theirs.

And they want to hear yours too.

Typically, Smith Fine Arts tries to have at least one outreach on the day of a performance.

“It’s tricky fitting in an outreach event the day of the show,” said Dirk Freymuth, associate professor of music at WOU.

This year Freymuth proposed bringing out one of the acts a day early.

“It’s really been a struggle to get connected with local schools,” Freymuth said. “It’s really complicated having them bus out to us.”

While the members of Las Cafeteras are accomplished musicians, they also have degrees in various fields: Hector Flores in Chicana/o studies; Jorge Mijangos in physics and mathematics; Xocoyotzin Moraza in ethnomusicology; Jose Cano in mechanical engineering; Daniel French in sociology; and Denise Carlos in clinical social work.

The first stop for members of Las Cafeteras was at the after-school program at Talmadge Middle School.

Flores, Mijangos, Moraza and Cano shared a little bit about themselves.

Flores told the students they became a band by accident.

“Went to college, worked,” he said. “I worked at a nonprofit.”

They met in college and started playing music together, before deciding to quit their day jobs to do it full time.

They learned a style of music called son jarocho, an Afro-Mexican genre.

Las Cafeteras played some of that music, noting their traditional instruments as well as where the harmony, melody and bass entered the song.

Then Flores asked students to share a bit about themselves with someone sitting near them — full name, where they were born and where their parents — or whoever takes care of them — were born.

He asked them to answer by show of hands if they or their elder family members were born in Oregon, out the state, or out of the country.

Each category had several hands raised.

“We’re all the same because we’re all different,” Flores said. “It’s a beautiful thing. There is nobody like me and nobody like you.”

Carlos and French had to reroute from Sisters through The Dalles, because of the snow and didn’t make it to Talmadge, but they were at WOU that evening for an informal workshop.

French said their music is “like an entry point to think about how is music telling stories that can change the way we see the world.”

It’s a way to preserve stories and history.

Carlos asked attendees to introduce themselves to someone near them, as Flores did at Talmadge.

“The beauty of sharing who you are is you’re inviting people to your story,” she said.

He asked attendees to answer by show of hands if their parents graduated from a four-year university in the United States, if any families members have been incarcerated or in jail, if when they were growing up they could walk to a liquor store or if they lived by a freeway.

“I got my degree in sociology,” Flores said. “I’m a sociologist. This is what we look like.”

He said what he just did was create a community asset map, you can tell who’s in this community based on these statements.

“Your world view is how you view the world, pretty simple,” he said. “Now, the dope thing about a world view is that we all have a different one. You can’t buy a world view, you can’t purchase it. You have to experience it.”

Everybody’s world view is different and connected to the way they grew up, he said.

“For example, if you had parents who graduated from a university, that’s a very different experience from someone who did not,” Flores said. “My mama, she didn’t graduate (from a school in the U.S.). She didn’t go to college and so she couldn’t help me write a personal statement, an essay. She doesn’t know what a topic sentence is. Those things that you learn, that you need to apply to get from A to B, it’s just different. Not better, not worse, it’s just different.”

He said in East Los Angeles, there is a high school that has 24 liquor stores within a mile radius.

That experience is different than what he has seen in the parts of Oregon he has driven through, where he noticed trees and snow.

“The first thing I think about is, ‘Wow, how does that affect a young person growing up?’” he said. “Not better, not worse, just different.”

He said during his time as an organizer he gave a “dope Power Point presentation” about environmental justice to a class of about 50 high school students.

“Everybody left except this one young man, he stayed behind,” Flores said.

He was excited, thinking the teen was going to join the United Students club. Flores said he imagined a whole future where this kid would not only graduate high school and college, but go on to run for president.

But what the student asked is where he got his shoes.

Flores said he was frustrated and said, “I said I don’t know man, I got them at Whole Foods, OK.”

“He had no idea,” Flores said. “What I realized is that we live in the same hood but we come from very different worlds. That was a very clear thing to me. And if I wanted to understand the experience of this young person, I had to listen. I had to listen to his story.”

“It’s super simple, but it’s super profound,” he said “When you know who you are, you’re very empathetic and conscious about other people, less judgmental.”

The answers included gangs, Los Lobos, poor schools, danger, you have to wear the right colors.

“As someone who was born and raised in L.A., I can tell you all this is true,” she said. “If all of this is true, then what’s the problem with a list like this. If these are these are the stories we’ve heard about people from where I come from, essentially this is me. We’re pretty realistic. We know this stuff happens. We probably come from neighborhoods like this. But we want to talk about all the beautiful parts, all the joyful things.”

She played a portion of Las Cafeteras’ version of “La Bamba.”

“The example that we want to share, how we do this with our stories is writing music,” she said.

“‘La Bamba’ is an old son jarocho song, hundreds of years old, Afro-Mexican song. One of the very first songs we learned as son jarocho students. We wanted to show people the lens that we’re seeing our world from.”

After the video, she asked for some more thoughts about East L.A.

This time the responses included sunshine, bright colors and immigration.

“We did that video a while ago,” Carlos said.

It was important for them to show people who they were through something they love doing, she said.

“Before we are anything — musicians or artists — we are storytellers,” Carlos said. “We feel like we have this charge to be the person who speaks for our family or to share the story of our neighborhood. We might not speak the same language, but we’ll learn from you and that’s a big part of what we do too, is also inviting everyone to tell their stories. No one can tell it better than you.”

Watch a black coyote and dog form a rare friendship