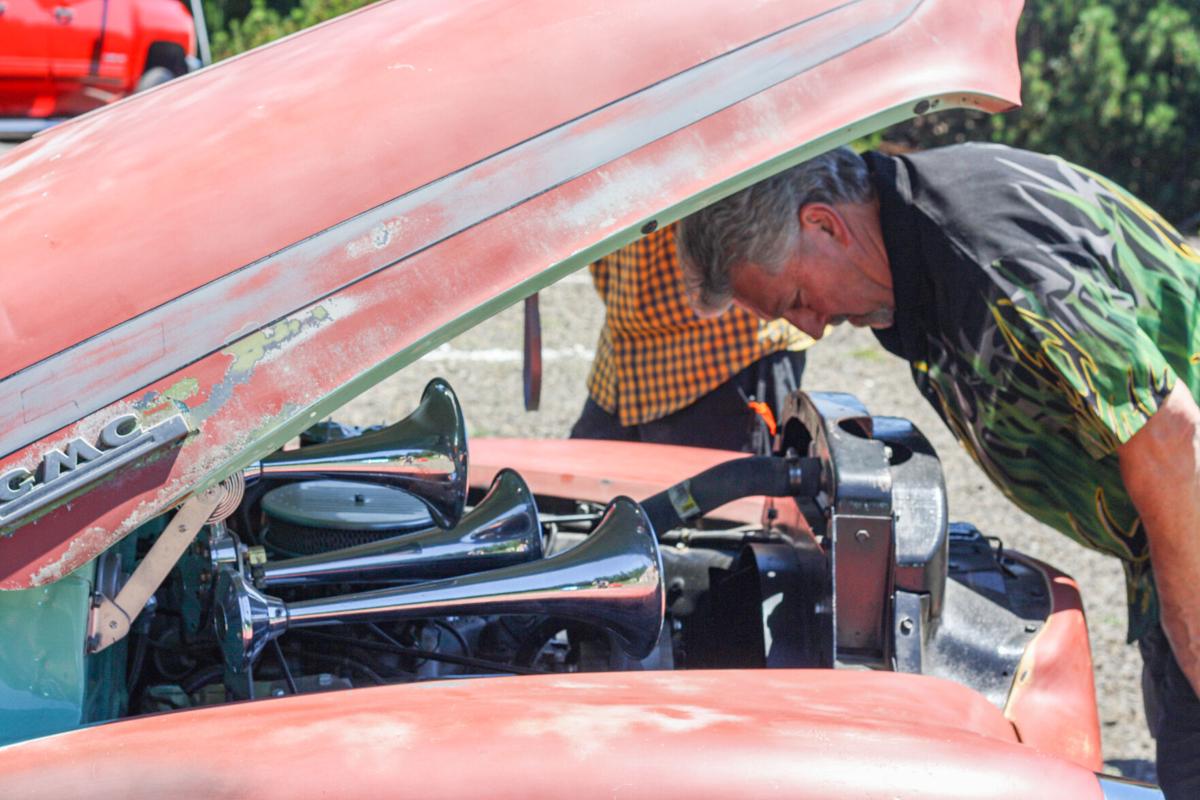 Marty Parker, of Dallas, gets a closer look at the engine of a 1930s Chevy Suburban at the Rods and Rock and Roll show Sunday at BeckenRidge Vineyard. 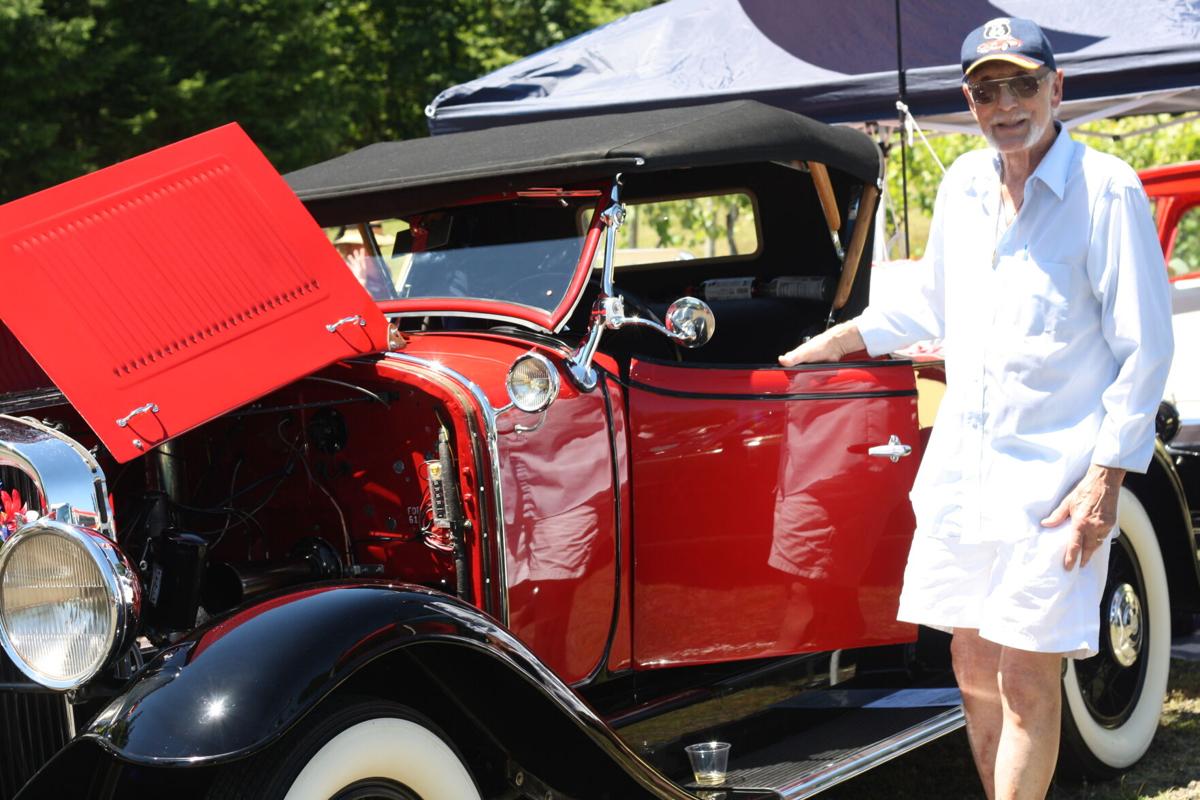 Lee Hart, of Salem, is the proud owner, with his wife Sally, of what he calls the only 1930 Commander 8 Regal Roadster Studebaker left in the world. 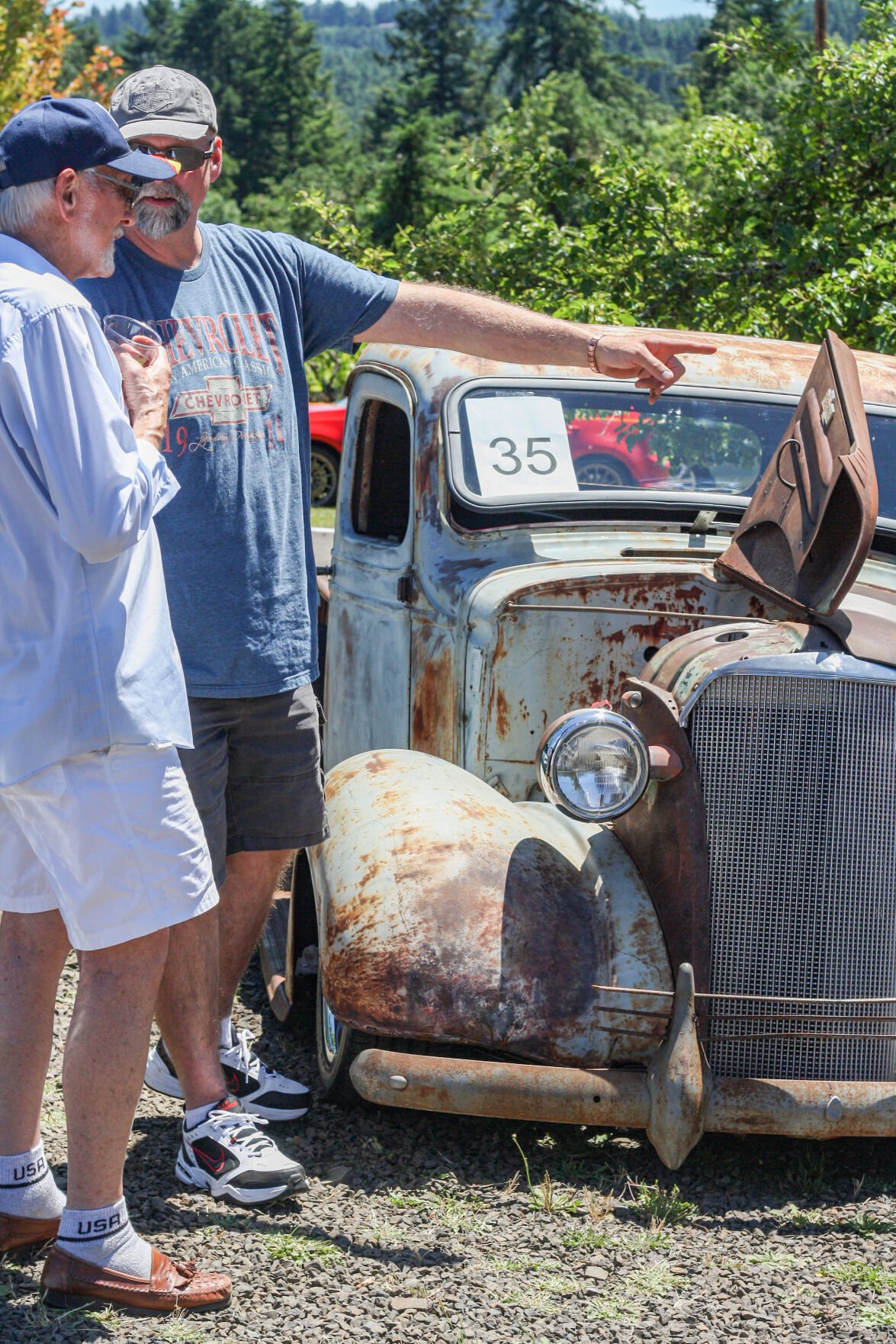 Kevin Flowers describes to Lee Hart how he aquired some parts for his 1937 Chevy Pickup at the Rods and Rock and Roll show Sunday at BeckenRidge Vineyard.

Marty Parker, of Dallas, gets a closer look at the engine of a 1930s Chevy Suburban at the Rods and Rock and Roll show Sunday at BeckenRidge Vineyard.

Lee Hart, of Salem, is the proud owner, with his wife Sally, of what he calls the only 1930 Commander 8 Regal Roadster Studebaker left in the world.

Kevin Flowers describes to Lee Hart how he aquired some parts for his 1937 Chevy Pickup at the Rods and Rock and Roll show Sunday at BeckenRidge Vineyard.

DALLAS — When Jim Turner and his family purchased BeckenRidge Vineyard last year, he had visions of days like Sunday, without a cloud in the sky, the sun reflecting off acres of chrome.

After a year under public gathering restrictions due to the pandemic, Turner was finally able to share his vision of classic cars combined with classic rock at his first ever Rods and Rock n Roll event on Father’s Day.

Car enthusiasts’ smiles were beaming as brightly as the polished paint of their rides. Lee and Salley Hart drove their red, 1930 Studebaker out from Salem.

“We take it out as much as we can. We take it to a show almost every weekend. We put 1,200 miles or more on it since we bought it a year ago.,” Lee said. “For a while, it looked like we weren’t going to have a car show this year.”

He said the Rods and Rock n Roll show could have done with a few more cars, being only 34 showed up to BeckenRidge’s parking lot.

“This is their first try. They’ve done very well,” he added.

Impressed by all the other cars in the show, Lee said he had the oldest one registered, then boasted it was probably the only one left in the world, ticking off its unique features.

It’s a rumble seat roadster, a Commander 8 Regal Roadster. Studebaker made some Presidents, they’re still around, but no Commanders. At least none I could find on the internet,” Lee said. “They originally built them for racing. I actually have several pictures of ladies, of all things, racing these things. All the way up to 77 mph. We’ve had so much fun with it.”

The participants didn’t have to own the shiniest classic car to join in on the fun. Kevin Flowers drove his 1937 Chevy Pickup from home, right down the road from the vineyard. What looks like a rig in dire need of a paint job is exactly how Flowers wants it, faded patina and all. And having a place to take it finally is a bonus.

“It’s fun. It’s fun to get everybody together,” Flowers said, adding he was excited to finally go somewhere without face masks. “We’re just having a good time all the way around.”

Get hot rodders together, and they inevitably admire each others’ rides, swapping tales of hitting the highway.

After Marty Parker, of Dallas, pulled his head back from the shadows admiring the engine of a 1930s Chevy Suburban, he talked about his own ‘34 Chevy Roadster.

“There’s only two street rods here. Mine and a ‘28 down there, everything else going to newer stuff,” Parker said. “I’ve got a couple of them I like to drive every day. Run into town and get stuff, if it ain’t raining.”

He then interrupted his own tale to pull in a nearby Don Flammang of the Willamette Valley Street Racers car club, asking him what he thought of the show.

“Fantastic. This cowboy thinks it’s just wonderful to get this world back to normal,” Flammang said, before going off on a tangent about a recent driving experience in his classic car, which he assumed everyone knew which one his was speaking. “I tell you what, I’m driving it down there all of sudden I get there, I hear a metallic sound like flex plate still dragging on starter gear, a looseness. Get a howl when I put my foot into it, that sniper fuel injection is needing a tuning. So, it’s the most I’ve driven it since starting it up. The more you drive it, the better sniper gets, so I would have loved to drove it, but the metallic sound bothered the (snot) out of me….”

The two are joined by another and their stories carried on.

And that’s the goal Turner had, bringing together a classic car community at the end of a road to swap tales and admire the others’ rides. Chatting with them, he takes the blame for the low turnout.

“I’m happy with the number of cars registered,” he said. “But there could have been a better turnout of people looking at them. It’s my fault. I need to promote it better next time.”

Having already dealt with one virus through the community, word of mouth about Turner’s event is sure to be a more welcome spread next time.

Airports in the U.S. West dealing with shortage of jet fuel

The VA will mandate vaccines for its health workers in Oregon