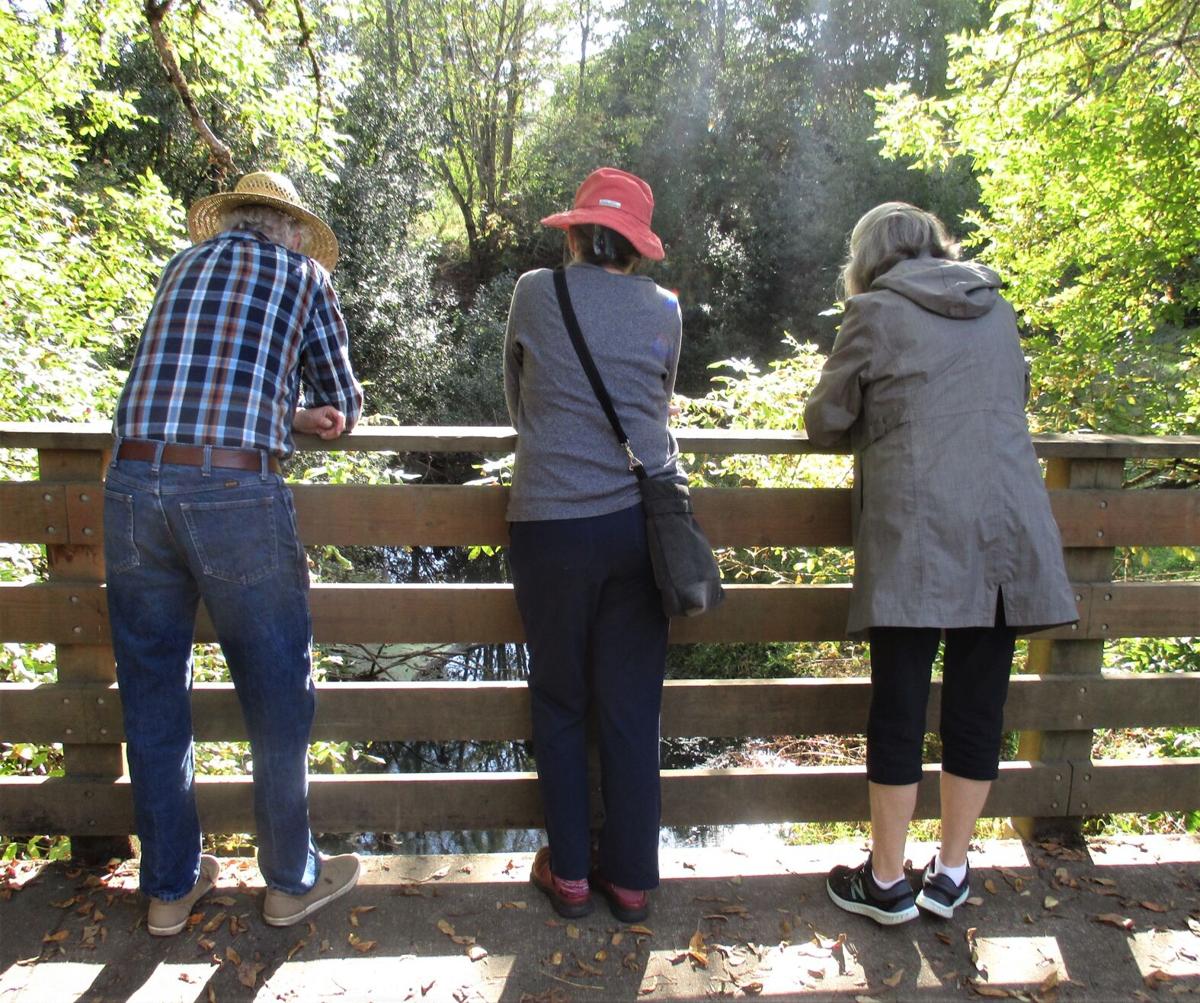 Ash Creek observers, shown looking down at the creek in Riverview Park. 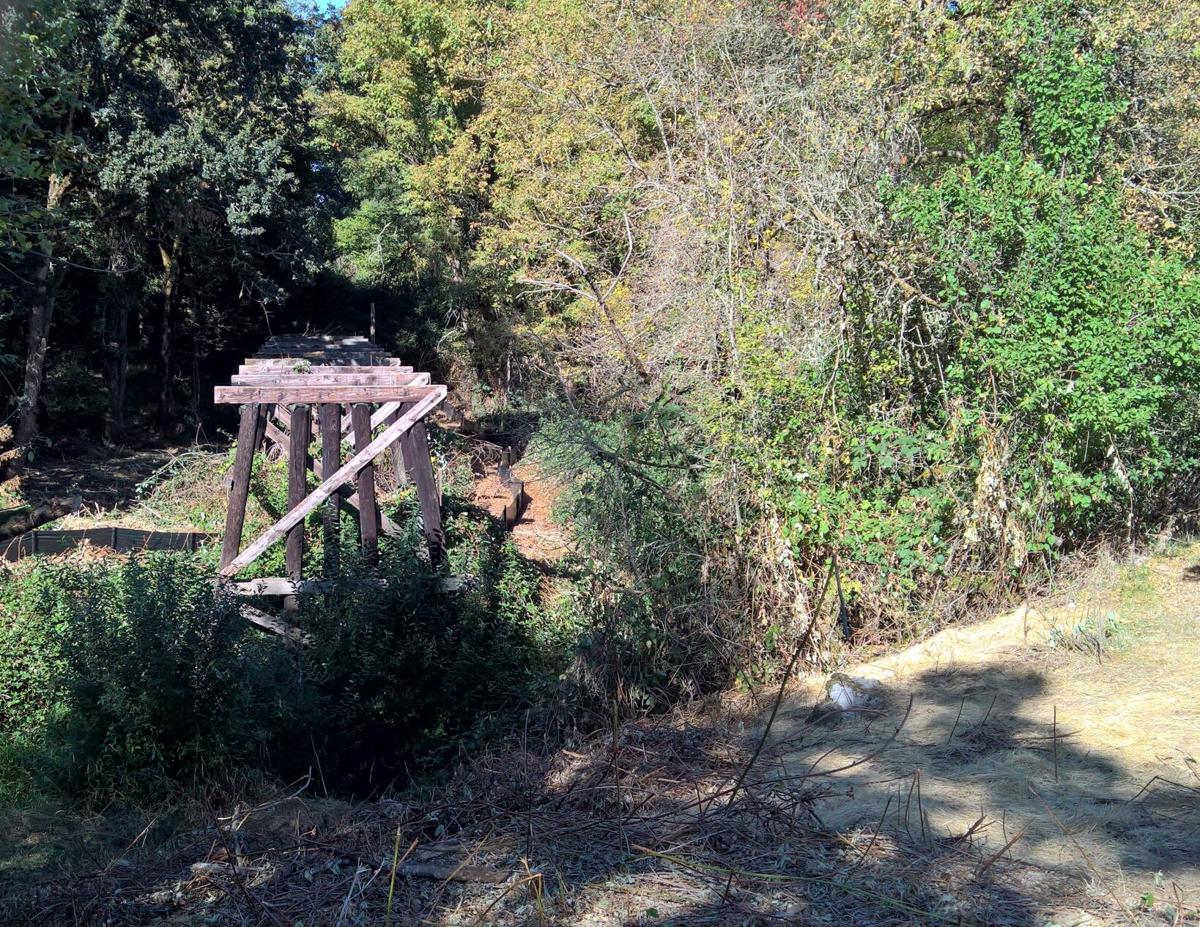 Right, an old train trestle running near Ash Creek seen from a distance. 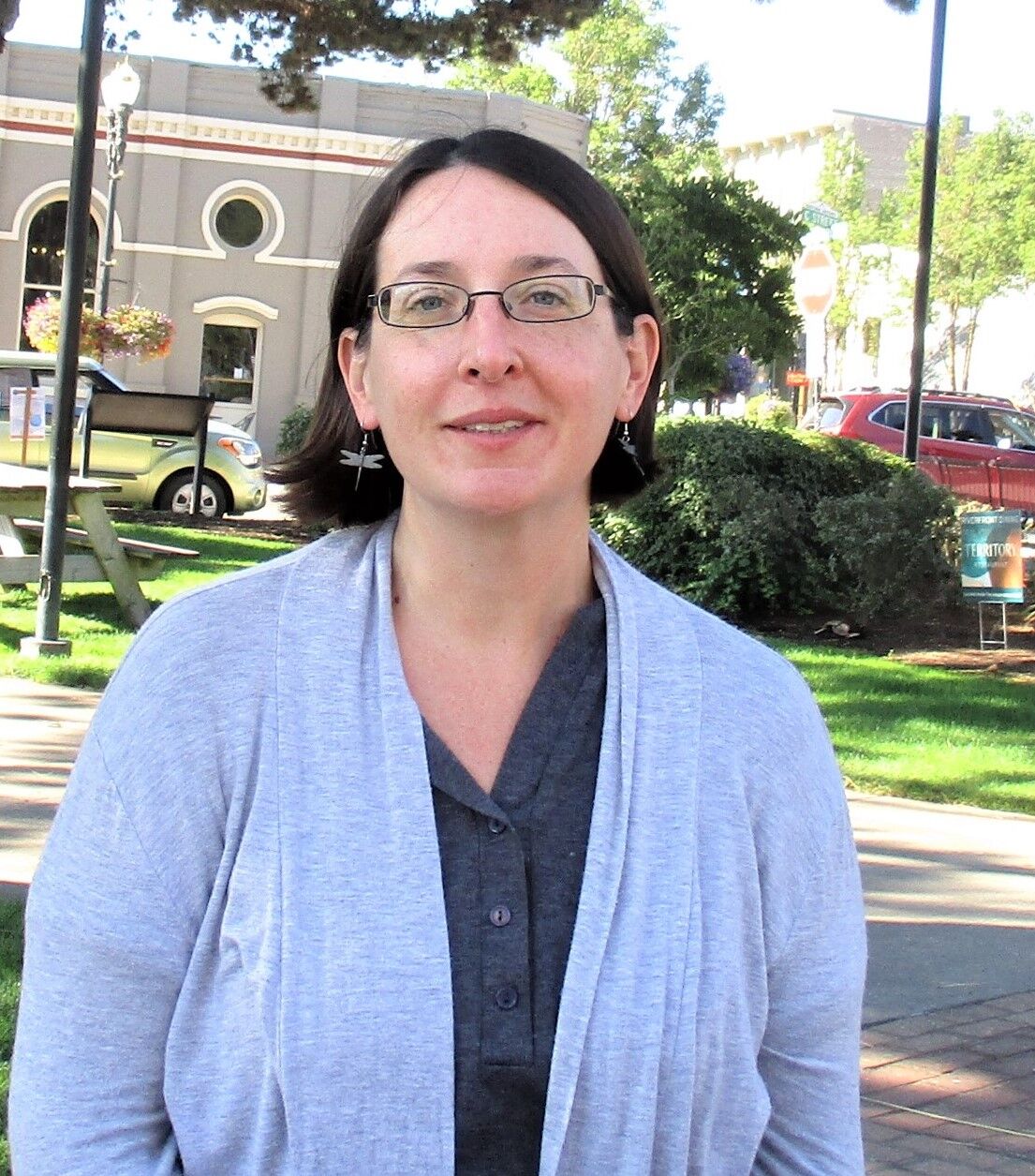 Ash Creek observers, shown looking down at the creek in Riverview Park.

Right, an old train trestle running near Ash Creek seen from a distance.

INDEPENDENCE — An old-fashioned expression says that most worthwhile work doesn’t ever get the recognition it deserves. If that’s true, then there’s probably no better example in Polk County than the Ash Creek Water Control District. For nearly 70 years, this agency has toiled to improve the channel of Ash Creek — but you’d never know it from a recent Independence Planning Commission meeting.

Worries over Ash Creek, the city’s signature stream, surfaced as new floodplain standards were discussed by the city’s planning commissioners — none seemed to know about the Ash Creek Water Control District (ACWCD), which provides oversight of the waterway.

Rebecca Jay, a newcomer to the commission, voiced concern about old train trestles, which can trap trees and cause flooding.

“Who does that kind of checking to make sure that stuff is cleaned up?” she asked.

Answers popped up, ranging from the Oregon Department of Transportation to the Oregon Department of State Lands. In fact, only weeks earlier, the ACWCD had removed an old train trestle by the creek near 9th Street — a trestle taller than many of the city’s downtown buildings. And, on the very day the planning commission met, one ACWCD board member had clambered down to the Ash Creek site where the trestle once stood, to check on new plantings there.

Asked why the ACWCD’s efforts seem to flourish in such surprising obscurity, the board chair, Dan Farnworth, has a theory: “It occurred to me that one of the reasons the board is not more recognized is because the board has no regulatory power, no rule-making power, no enforcement authority,” he said. Also, there’s nothing glamorous at all about the work. “It’s cleaning out the creek,” he explained.

The district’s nine-member board is comprised of residents known colloquially as “stewards of the creek.” Longtime board member Andrea Melendy, who lives on property the creek runs through, has known Ash Creek all of her life. She grew up in Independence when Gun Club Road was nothing but gravel, with so little traffic that she could lie down on it at night to stargaze, and not a single car would drive by.

But, as the population grew, she began to see more debris appear in Ash Creek. She and fellow board member Donna Schuyler came up with a solution — to place garbage barrels at public points along the nearly three-mile waterway. It’s worked well in many areas, particularly the bridge crossing at Riverview Park. Passers-by now plop snack wrappings and soft-drink containers into the conveniently placed trash cans, instead of tossing them into the creek as they walk by on the concrete path, she noted.

Despite the fact that the ACWCD wasn’t mentioned at the recent meeting of the Independence Planning Commission, the city of Independence has been a frequent partner. City staff assisted on several projects with the ACWCD over the past few years, including the placement of the refuse containers and, also, on the trestle project, said Kie Cottam, Independence’s director of public works.

Over the years, the district board members, who are elected to their unpaid positions, have tackled invasive plants like Japanese knotweed and reed canary grass that threaten to choke out other plants; protected creek banks from destruction by rodents like nutria; and tried to impart the importance of this waterway to a whole new generation, by giving grants to local teachers.

One of those grant recipients is Dave Beatley, a sixth-grade science teacher at Talmadge Middle School. Under his supervision, students have explored the meandering creek, which passes by school grounds. Last year, the youth — protected by waders and armed with special nets — collected samples and then viewed them under microscopes. Numerous tiny creatures, called macro-invertebrates, could be seen — some looked like tiny dragons, others like curved worms. It’s the kind of hands-on education that Beatley likes to provide and that the students seem to love, he said. This year, with mandatory distance-learning underway, grant money from ACWCD is enabling Beatley to put cameras at places along the creek. The waterway is vital to local animal life, from black-tailed deer to great blue herons — even otters have been spotted playing in the creek at Riverview Park. Beatley plans to share the wildlife videos with his classes.

The history of Ash Creek goes back thousands of years, stretching into a past that includes Native Americans, who once lit campfires along the banks. In fact, there are still remnants from a tribal encampment in a field near Ash Creek. In 1951, farmers frustrated with recurrent flooding along the creek formed the ACWCD. With this rich history, why does the district have such a low profile?

One reason may be that the ACWCD has no staff, no office and, until recently, not even a physical address, explained Board Chair Farnworth. After the state mandated that ACWCD had to have an actual location, “we got one at Indy Commons” on Main Street in Independence, Farnworth noted.

The trestle removal was a big project for the ACWCD — with a cost that came in just under $70,000 — and it took years to complete, Farnworth said. All that’s left where the structure once stood is a grass patch, the likely place for wild blackberries to grow, Farnworth observed, adding that blackberries are another invasive plant species targeted for abatement by the district.

But these succulent berry-bearing bushes are one reason attorney Donna Byrne values the creek. In fact, she named her business after it: Ash Creek Tax Counseling and Legal Services. She considers the blackberries “delicious eating” during her creekside walks. She plucks the fruit from the part of the plant high enough to escape territory-marking dogs and picks from foliage that shows no telltale signs of pesticide residue.

However, it’s essential to replace invading plants with ones that naturally occur in this area of Oregon, according to Kristen Larson, executive director of the Independence-based Luckiamute Watershed Council. Native plants along Ash Creek are important in multiple ways, such as enriching and stabilizing the soil, which helps to prevent erosion of the banks. These native plants also offer important water-cooling shade for the creek, while providing a habitat for pollinators, like bees, which enable new generations of plants to grow and flourish along the corridor. Additionally, stream side plants buffer out pollutants from surface run-off, reducing sediment and toxins that end up in Ash Creek and the Willamette River, she said.

As Independence continues to grow — with a new and soon-to-be-unveiled transportation system plan — the creek seems likely to get renewed respect for its ability to receive and handle run-off; Traffic increases and road deterioration are associated with a higher risk of water-carried contaminants.

And streets, particularly highways, can affect the water quality in creeks, through downstream run-off with composites from paved roadways, according to a report this past year by the US Geological Survey (USGS). The USGS report advises that, by implementing features like swales and detention basins, effective protection can be established against potential stream pollution originating from storm water.

In fact, a predictive tool by the USGS, which goes by the acronym “SELDM,” shows promise for forecasting the possible impact on nearby waterways from new transportation construction, as shown by the results of the study, which involved Mill Creek near Salem.

“I do see SELDM as tool that can help with street planning,” said Adam Stonewall, a hydrologist at the Oregon Water Science Center in Portland. “It can also be used to estimate the quantity of storm water pollutants being delivered from roads and other impervious surfaces into streams, and it can be used to plan mitigation efforts for those same pollutants,” he said.

In the meantime, thanks to the ACWCD, Ash Creek seems to be doing just what it is supposed to do.

“It takes care of storm runoff, and it does it very well,” Farnworth said.