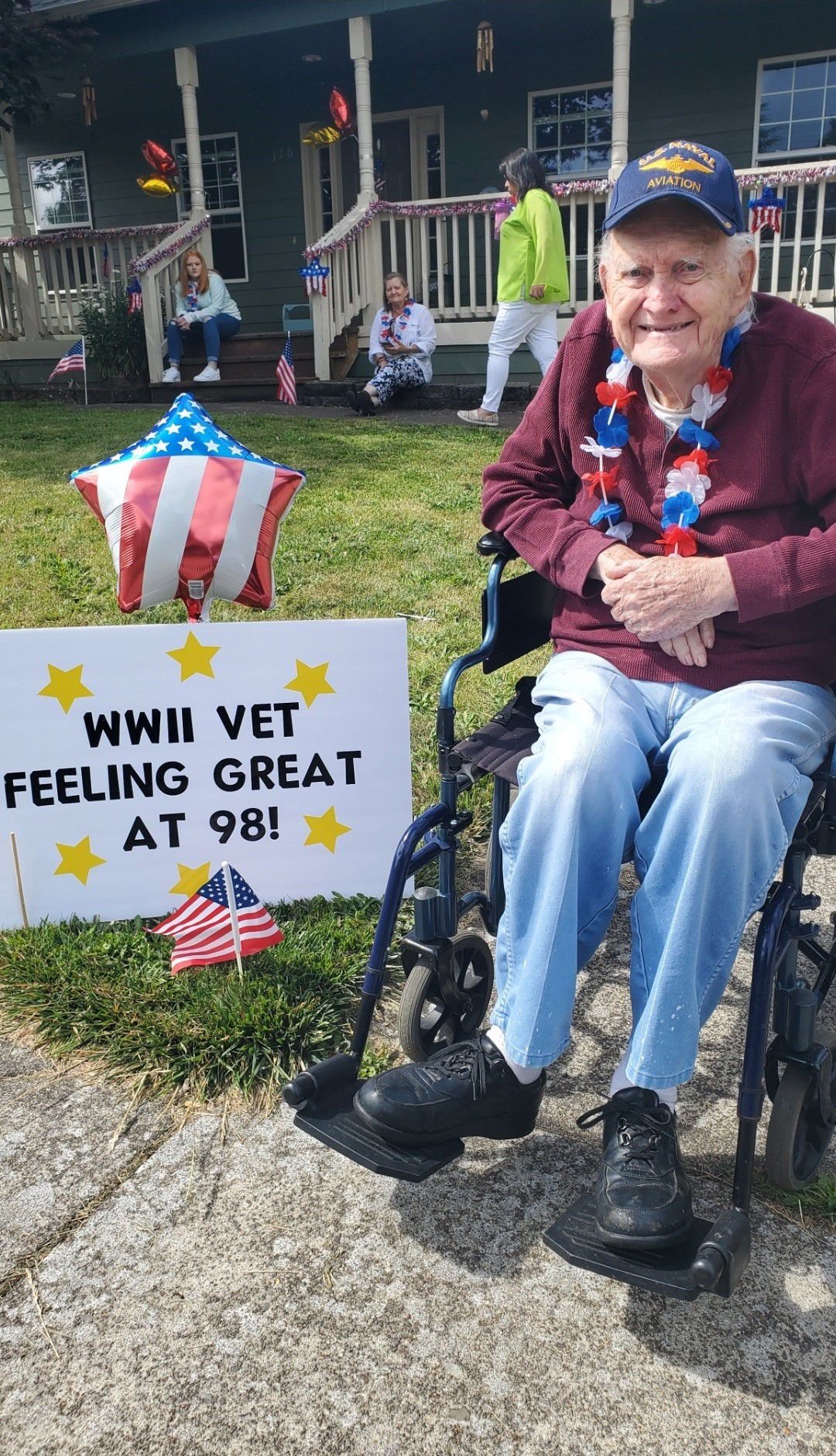 Friends and family of Robert Dunn of Dallas threw a parade Saturday in honor of his 98th birthday. Some 16 cars made their way from Safeway to the end of Northwest Elderberry Lane. 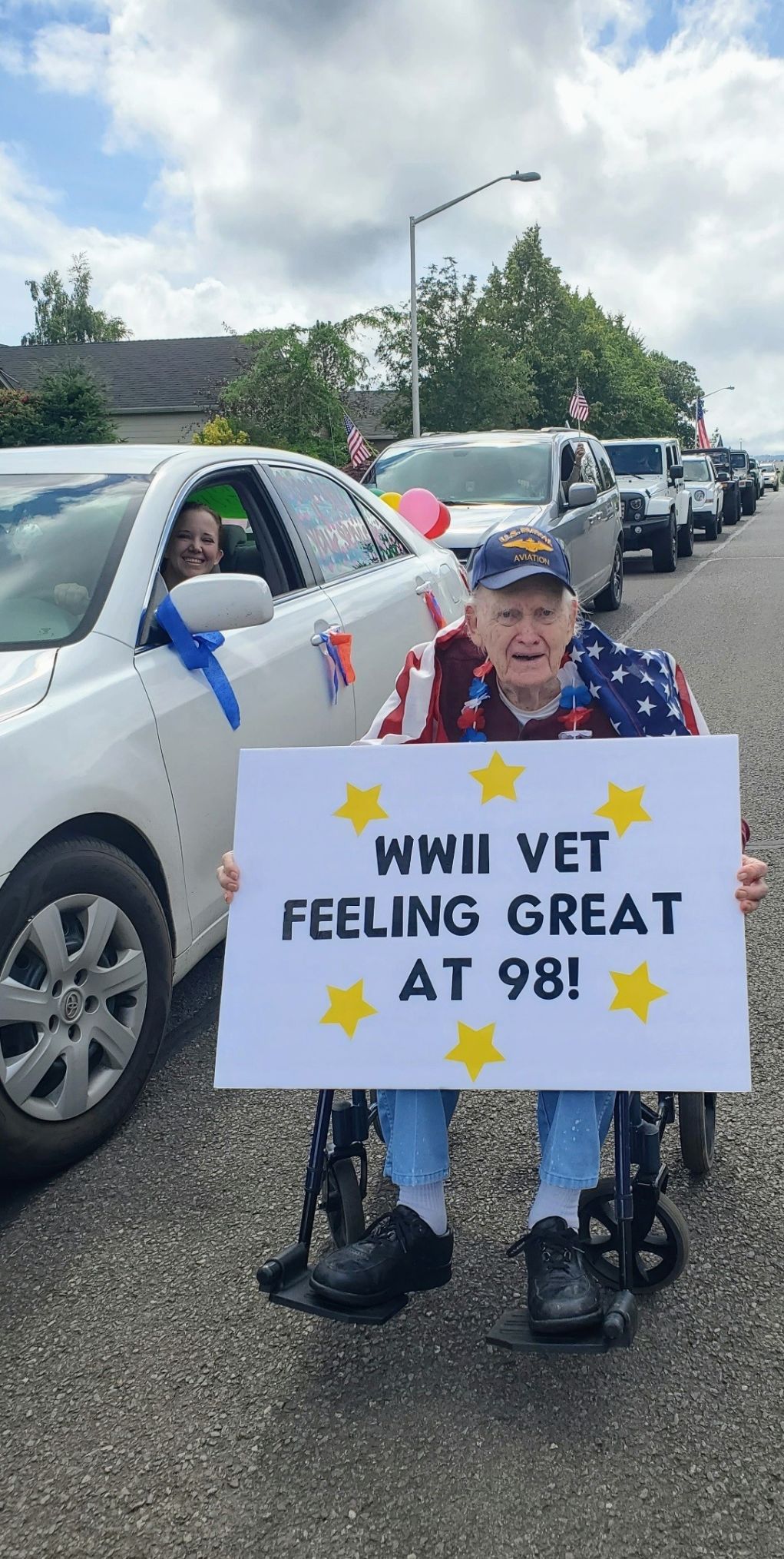 Robert Dunn of Dallas, a veteran of World War II, marked his 98th birthday Saturday with a parade thrown in his honor by family and friends, including Brittany Gregory of the Independence Elks Lodge (left). Some 16 cars made their way from Safeway to the end of Northwest Elderberry Lane.

Friends and family of Robert Dunn of Dallas threw a parade Saturday in honor of his 98th birthday. Some 16 cars made their way from Safeway to the end of Northwest Elderberry Lane.

Robert Dunn of Dallas, a veteran of World War II, marked his 98th birthday Saturday with a parade thrown in his honor by family and friends, including Brittany Gregory of the Independence Elks Lodge (left). Some 16 cars made their way from Safeway to the end of Northwest Elderberry Lane.

Robert Dunn of Dallas fought in World War II and the Korean War, but if the 98-year-old could go back in time, he said he wouldn’t do it again.

“Hell, no!” said Dunn. “I sacrificed and many died. Show me any of the freedoms I fought for today. Ain’t none left.”

Because of the coronavirus pandemic, he can’t eat out, attend ball games or get haircuts. His Fourth of July plans have been canceled. He can’t even see his remaining family.

“He’s lost a lot,” said Angel Hatchell, his friend and former caregiver. “It saddens and angers him.”

Hatchell decided he deserved better. If he couldn’t get out into the community, then the community would come to him. She organized a parade for his 98th birthday on Saturday.  Some 16 cars made their way from Safeway to the end of Northwest Elderberry Lane about a half mile away.

A little recognition was all Dunn really wanted for his birthday, Hatchell said.

“It was wonderful,” she said. “We had a lot bigger turnout than I was expecting.”

The event immediately snowballed, said Hatchell. “We were going to just have a small family meeting because of COVID issues, but I just felt we needed to do something special,” she said. “All the kids have been having birthday parades, so I reached out, and people responded.”

When she heard about the parade, Britney Gregory of the Independence Elks Lodge rallied other veterans and supporters. Other organizers included Kal Anderson, Geried Arvey, Maria Ruiz and Pamela Garrick.

Dunn was born in Atlanta and grew up in Chicago. He served on the USS Wasp during World War II and continues to hold the naval record for the most successful landings on the aircraft carrier under disabled conditions — coming in with a missing wing and tail hook (a fact confirmed by records at the Polk County Veteran Services Office).

The Wasp had a storied career in World War II. After supporting the occupation of Iceland in 1941, the ship joined the British Home Fleet in April 1942 and twice ferried British fighter aircraft to Malta.

Transferring to the Pacific, the ship supported the invasion of Guadalcanal. The ship was lost in battle Sept. 15, 1942. These are all matters of historical record. Dunn himself doesn’t talk all that much about the specifics of his military experience.

“He never even mentioned being a veteran when I first knew him,” said Hatchell. “Wasn’t cool like now, I guess.”

After serving as a flight instructor during the Korean War, Dunn left the Navy and settled in California where he had a long career as a real estate broker. He was two-time past president of the Rotary chapters and served as a planning commissioner in Culver City, California, for eight years.

Dunn moved to Oregon in 2016 to be near his youngest daughter and remaining family. He soon met Hatchell. “I was actually his caregiver at one point,” she said. “Now he’s our best friend.”

Hatchell grew up in Monmouth and graduated from Central High School in 2006. Her father is former police Sgt. Rob Hatchell, who retired from the Dallas Police Department and moved to Texas after being shot in the leg by a suspect in the Dallas Walmart parking lot in 2016.

She helps Dunn as much as possible, enabling him to get out and explore Oregon.

“He is surprised daily by the countless shades of green that surround him here in Polk County,” she said.

Although he bemoans his loss of liberty, Hatchell said, he doesn’t blame any particular politician or political party. “He is unimpressed with all political leadership currently,” she said.

Dunn is hearing-impaired and communicated through statements relayed by Hatchell.

So what’s the secret to living to the age of 98?

“Not really telling the ladies how old I am and fried chicken,” Dunn said. “Keep an eye on the pretty girls, but don’t get caught.”