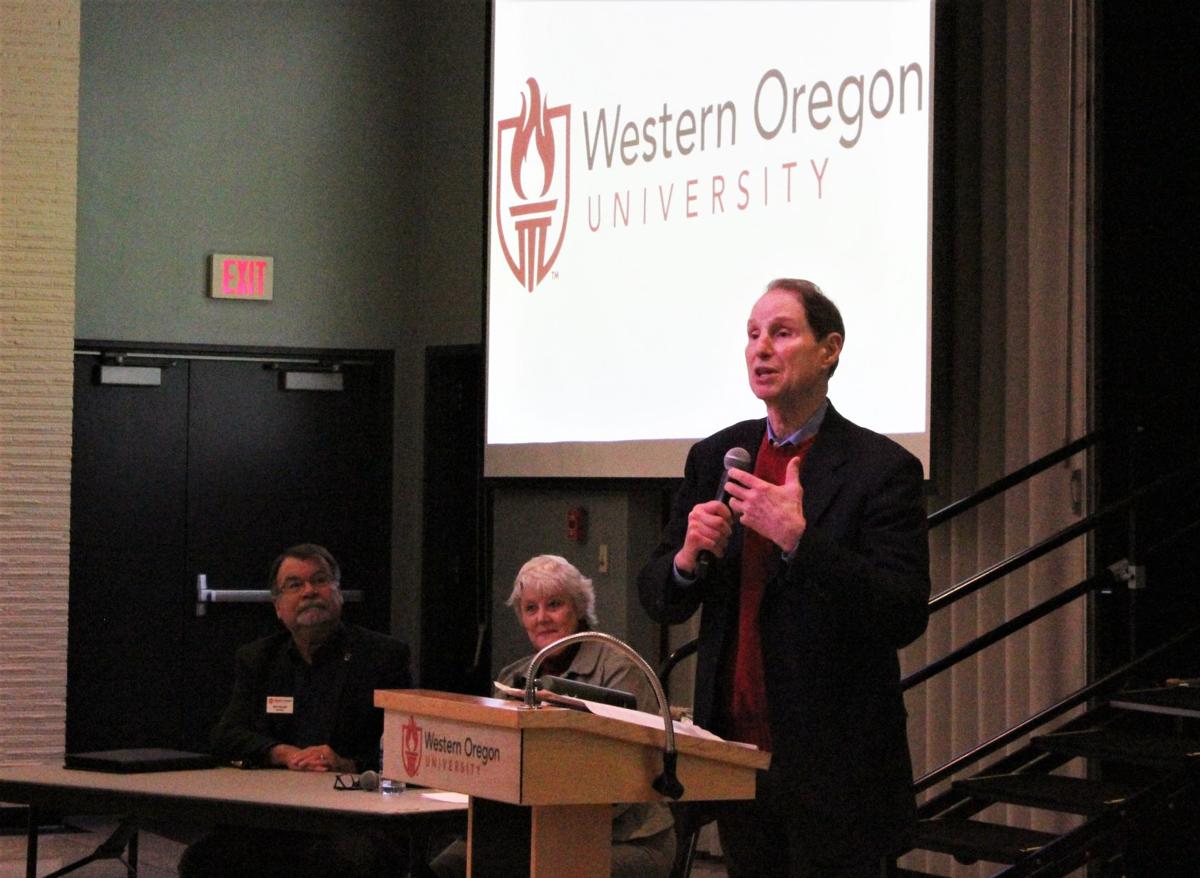 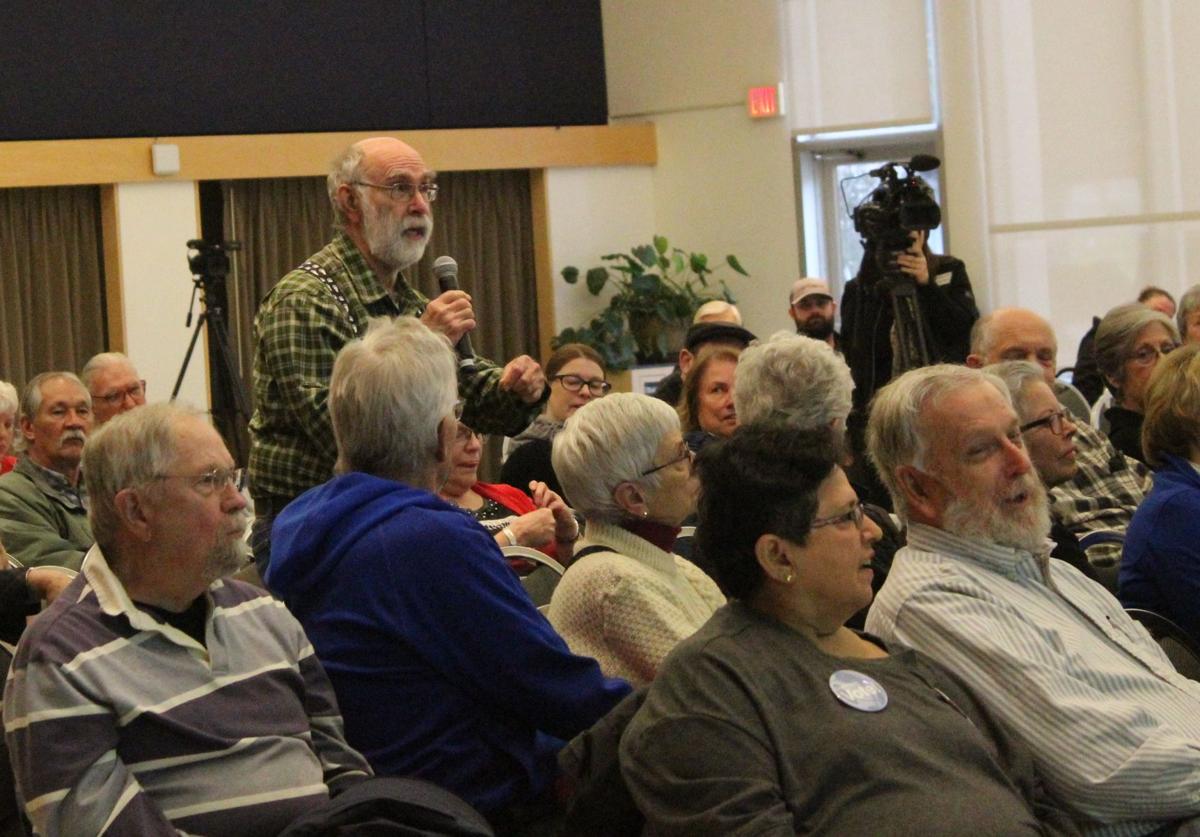 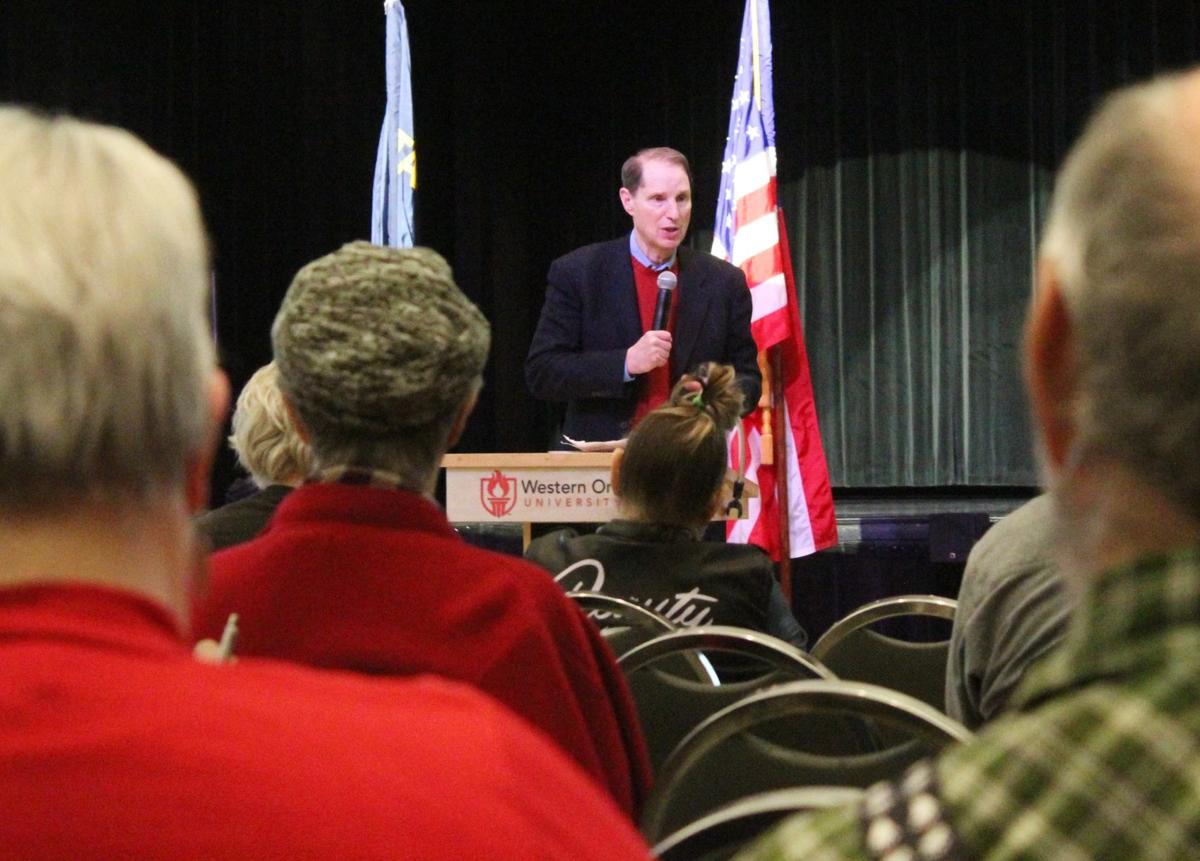 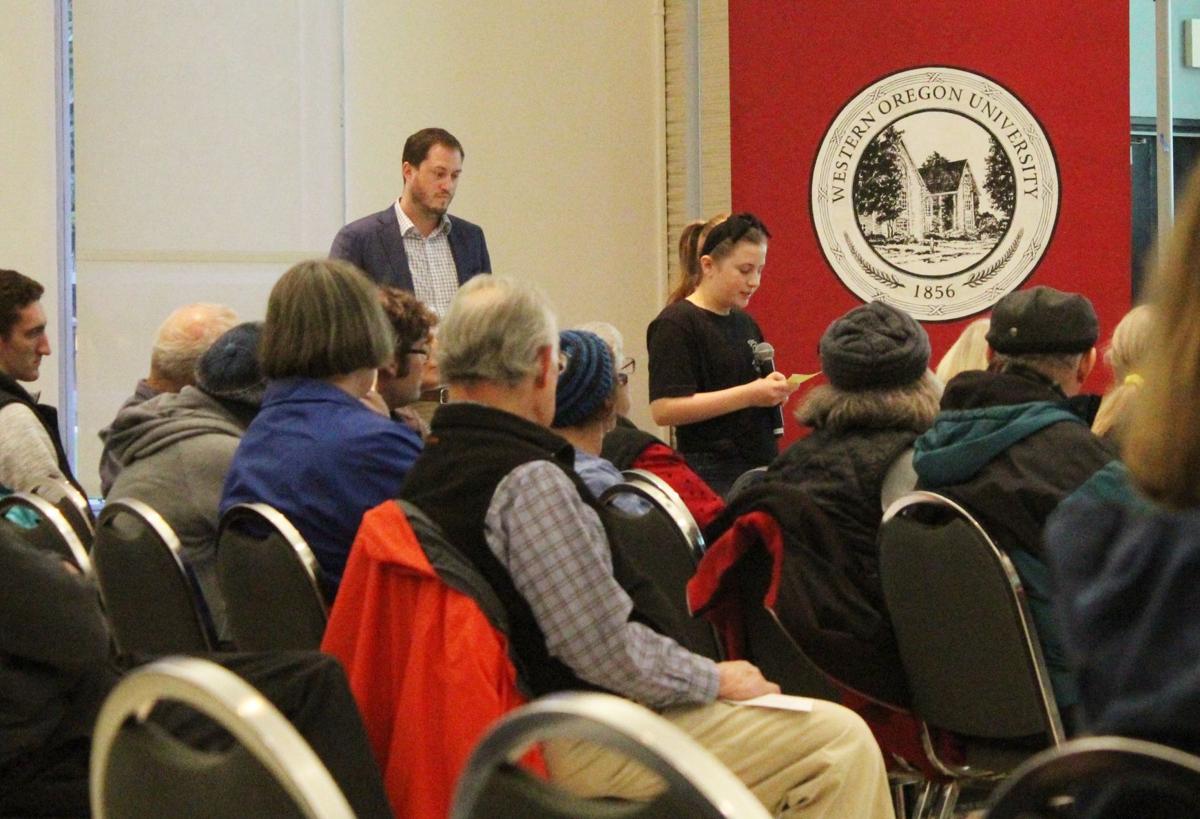 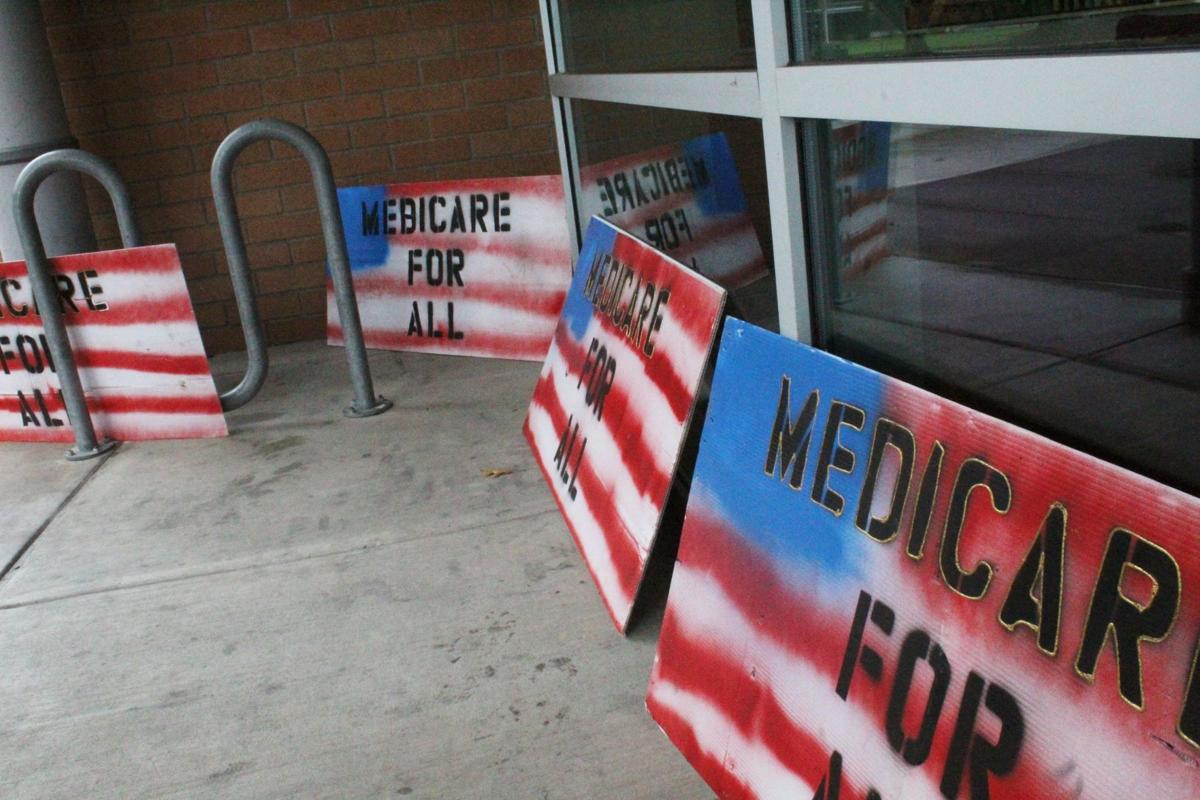 Wyden was elected to the U.S. Senate in 1996, and vowed to visit every county in Oregon at least once a year as long as he is serving. Saturday was his 962nd town hall meeting, and it was scheduled days before his  return to Washington D.C. following the holiday break.

The senator said at the beginning of his service in the Senate that his meetings would focus on issues, not politics.

“This is about issues, and by the way, the best politics is coming up with sensible ways to build coalitions and get things done,” Wyden said.

Saturday, Polk County constituents gave their list of things Wyden should be focused on.

Wyden said he held six town hall meetings since the U.S. drone strike that killed Iranian Quds Force Gen. Qasem Soleimani. He said citizens are concerned about the fallout from the strike and whether the country will go to war in the Middle East again.

“Obviously, the rhetoric has gotten a lot more menacing in the last 24 hours,” Wyden said. “Iran has a history of being unpredictable, which certainly ought to give everyone pause.”

The worry isn’t just for Iran’s response to the U.S., he said.

“(President) Donald Trump has a history of being unpredictable, especially in the foreign policy arena,” Wyden said. “The law allows me and the Congress to do something about Donald Trump’s unpredictability. It’s called the War Powers Act, and it says that the president can’t take the country to war without the Congress first voting consent, because the Congress has the power of the purse.”

Wyden said he’s gotten the message from citizens at his town halls that they want him and other members of Congress to use its authority.

“This is the time to draw a line in the sand and for Congress to stop surrendering its legal obligation to do vigorous oversight,” he said. “That’s what I’m going to do.”

A supporter of Medicare for All said he was dissatisfied with what he viewed as weak negotiations on issues such as housing costs, health care costs, the impact of climate change and stagnant wages for workers.

“This is the reality that we are facing, and it’s untenable. It’s unacceptable,” the man said. “What we are doing is we are asking you, as our senator, to go to Washington and change reality there. We can’t do that by just taking what they will give us. You have to fight for what we want, and we want Medicare for All.”

Wyden said he agreed that health care is a human right, and would support proposals that would take the country in the direction of universal coverage. But as the ranking Democrat on the Senate Finance Committee, he also had to reconcile differing view points within members of his own party.

“I’m going to have to find a way to bring people together. I do want us to recognize that we’ve got to talk through some issues with each other that are going to have to be reconciled. I have to be diplomatic about that,” Wyden said. “We have to work together on these kinds of issues.”

“So, what’s the problem then? The problem is the powerful interests trying to get their priorities rather than yours,” he said.

Wyden is co-sponsoring a bill with Republican Sen. Chuck Grassley (Iowa), the chairman of the finance committee, to place a price cap on prescription drugs that is tied to inflation.

“We defied the odds and got it passed out of the Senate Finance Committee,” he said. “The pharmaceutical lobby has spent enormous sums of money trying to block it.”

He said under the current situation, pharmaceutical companies can raise prices as much as they want.

“Insulin prices have gone up 13-fold in recent years, and insulin is not 13 times better,” he said. “It’s pretty much the same insulin we’ve had for the last 50 years.”

Gregory Camp, a retired doctor from Portland, said Wyden and Grassley’s bill is a start, but it doesn’t go far enough. He said the only real solution to reduce the costs of prescription drugs is to enable the federal government to negotiate drug prices.

“That is not part of your bill,” Camp said.

Camp said that he practiced medicine for 30 years and often saw patients struggle to afford prescriptions they needed.

Wyden said he would support a proposal to allow the government to negotiate prices, but proposed the rate cap to help in the meantime.

The bill would strip subsidies from drug makers for increasing prices over inflation rates. He said the pharmaceutical industry receives billions in government subsidies.

“What we do, if they go over a target, is we take away their subsidies,” Wyden said. “That money is given to the Medicare program to help people.”

The cost of education was another topic discussed Saturday, with a focus on finding ways to reduce costs and give citizens relief from heavy student debt.

A man at the meeting said he and his wife, a teacher at a local school district, are both paying federal loans with interest rates up to 8 percent.

“What is happening with proposals to forgive student debt, and why are interest rates on government loans so high?” the man asked. “Why is it that the government feels it needs to make money off the people they expect to be the main part of the economy, and the main people being held back in our economy due to student loan debt?”

Wyden said that the man’s question understates the problem people are facing. He said some people will have their Social Security income reduced because they still owe money on education loans.

“I’ve introduced federal legislation to keep people from having their Social Security payments taking away because they have been paying student debt forever and ever and ever,” Wyden said. “People are up to their eyeballs in debt.”

Will Landstrom also asked Wyden to address the problem, saying that he and his wife owe $500,000 in loans for their children’s education. Landstrom said a bankruptcy bill passed in 2006 outlawed discharging private student loan debt.

“Will you repeal that please?” Landstrom said. “We are dying with student loan debt. My wife and I are going to go to our graves $500,000 in debt for co-signing our kids’ student loans.”

Wyden said he supports other measures, such as making it easier to pay off student debt through public service.

“I want people to be making payments in relation to the income that they make,” Wyden said. “That would be a new consideration. Finally, I want to hold down the cost of college in the first place.”

He is co-sponsoring a bill with Sen. Marco Rubio (Florida) nicknamed “Know before you go.”

“It stipulates that students would be able to see what graduation rates are … and what people would be likely to earn,” Wyden said. “They can compare one university to another in one place.”

Western Oregon University President Rex Fuller, the host of Wyden’s meeting, is in support of that bill, he said.

“This would inject a little competition into this whole question of paying for education,” Wyden said.

A Polk County resident who works with an ecumenical group helping homeless people asked what was being done on the national level to relieve homelessness.

“Is there any priority at all in Congress to try to address these issues of insufficient and unaffordable housing?” she asked.

She said she recently was able to get a housing voucher for a woman and her daughter, but they still faced having to come up with a $1,145 deposit. She said her group has money to pay for deposits, but said she hoped that legislation could help ease that burden, too.

Wyden said he plans to introduce legislation to begin dealing with affordable housing called the Decent Affordable Safe Housing Act. It would repeal some of the tax breaks approved for those in the highest income brackets in 2017 to pay for housing solutions, starting with providing homes to families with children first.

A girl in seventh grade in a Polk County school attended Wyden’s meeting to ask him one question: “I have a science teacher who will not teach us about climate change … says it’s too controversial. What can you do to help Oregon teachers to take the climate emergency seriously, and how can you advocate for students like me?”

Wyden asked which school she attended, but she didn’t answer. He said he would take the name of the school after the meeting and make a private phone call.

“What I do in this situation is I call the school, probably the principal to start with, or the teacher, and I say ‘Can’t we work something out?’ So that the students can start learning about this issue that might affect their lives in such a dramatic way for years and years to come,” Wyden said. “I just think it’s an urgent issue.”

He said he’s in support of exchanging current energy subsidies for fossil fuels for those providing incentives for renewable energy, clean transportation fuel and efficiency.

“Let’s go out and get more green for less green out of our wallets,” Wyden said.

Dem: Red states 'getting what was coming to them' with Covid-19

See how these high school students are fighting the achievement gap