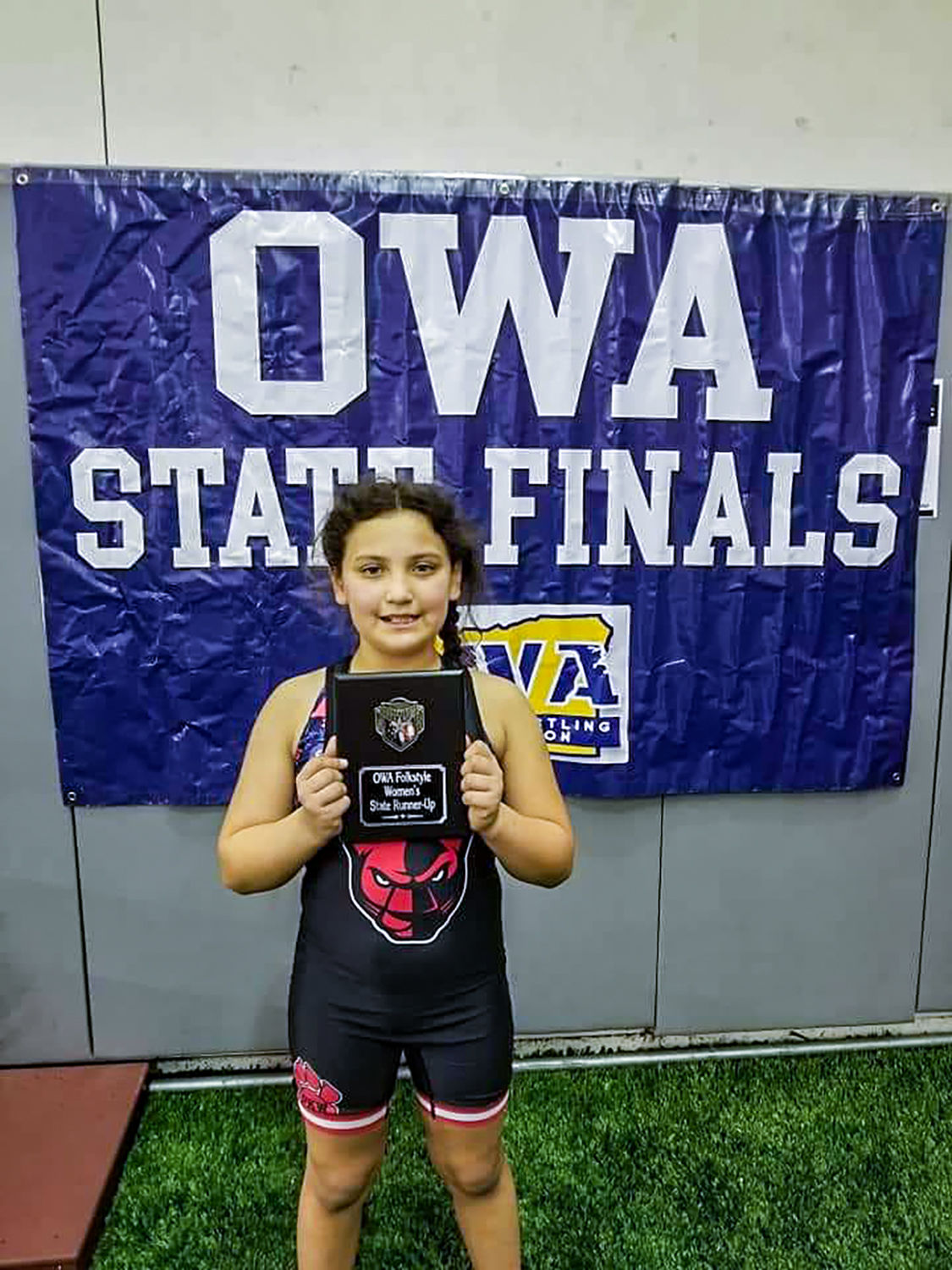 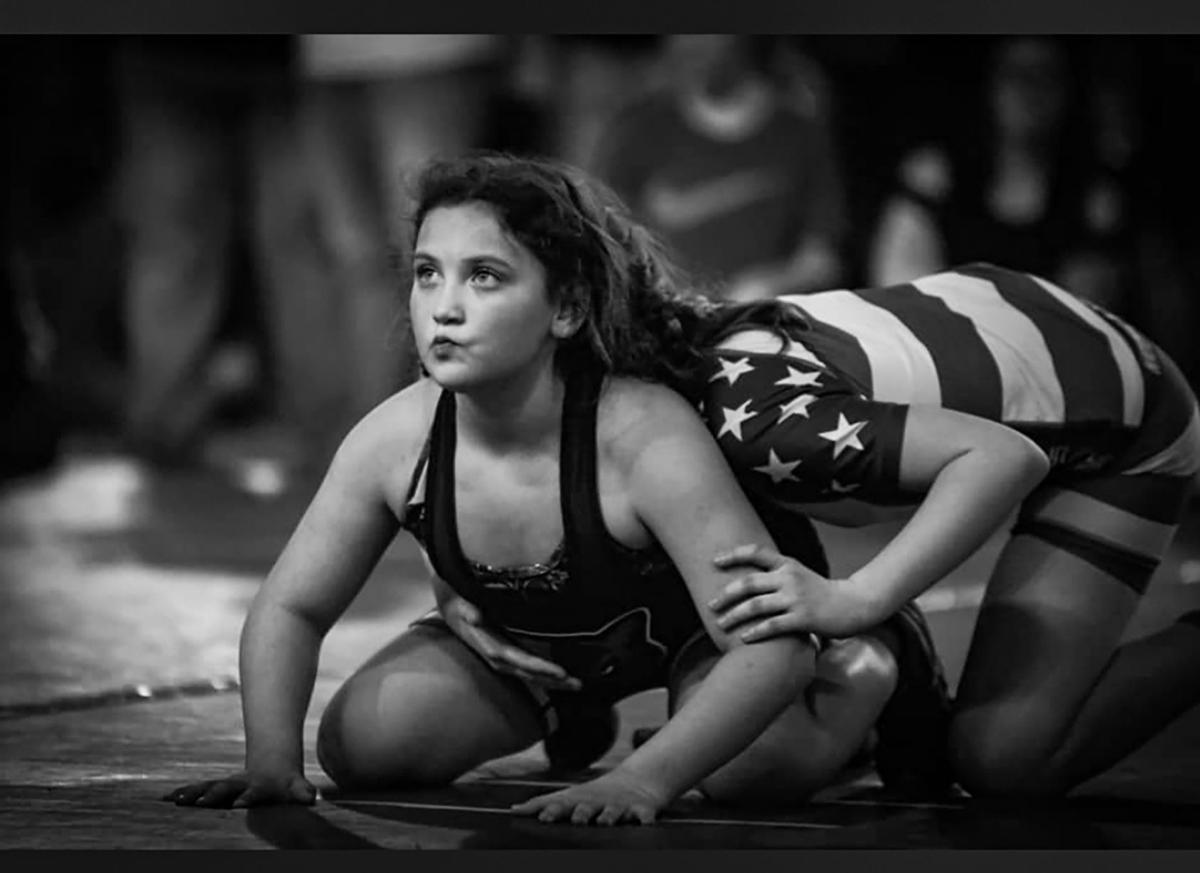 Lili Alvarez looks focused during a match, waiting for the official to blow the whistle for another round to begin.

INDEPENDENCE — Liliana Alvarez is shy as she sits at the table with her mom at Burgerville, drinking a strawberry milkshake.

Lili, 10, has been wrestling since she was 6. This year, she took second place in the all-girls division state tournament in Corvallis with a 31-3 record.

“Her first match was against a fifth- or sixth-grade girl, but she barely lost in overtime, and it was an amazing match,” Pena said. “The final score was 4-3. She got folded in half backwards to get that point scored against her. She just gets in these weird positions and then next thing you know her head pops up and it’s like, how did she get there?”

In the next match, Lili took down the loser of the championship match, pinning her in the second round and clinching that second-place title.

Two years ago, she placed second in the co-ed division, losing the finals match against a boy by only a few points.

“Although she doesn’t lose very often, when she does, she becomes more determined in the next match,” Pena said. “You can see it in her eyes, and it’s awesome to see that. It fires her up.”

She’s been on fire since her parents placed her in the club four years ago.

“We’ve tried cheerleading, we tried basketball, we tried lots of different sports, and she was like, ‘I don’t want to do that again,’” said Lili’s mom, Jacqlyn. “And her brother wrestled, and I have two girls, and I told my husband, ‘let’s let the girls do the (wrestling club) camp … let’s let them try it out.’ And he was like ‘no, no, no. No boys are gonna throw my daughters around.’ So we let her do the camp, and (the club) does a little-mini tournament, and I think there she got first place and I was like, wow. From there, we just went with it. And it’s something that she’s actually enjoyed. Her and her brother, it’s a wrestling match all day at our house. She really took to it. She found her thing, and it’s been fun to watch.”

“She’s so well-rounded. She’s a great technically-sound wrestler, and she’s tough as nails, so it’s pretty awesome to watch her. She rises to the level of her competition, every single time,” he said.

And people are taking notice.

“Everybody wants to watch her,” Pena said, laughing. “Groups of people following me around with her (at tournaments); they want to watch her.”

Lili has competition in her blood. Her brother is a wrestler and her mom was a boxer.

Her favorite tournament this season was the all-girls tournament at Battle for the Belts, where she took first place.

When asked why she likes wrestling, Lili looked down at her milkshake and said, quietly, “Because it’s competitive and fun.”

Wrestling is the fastest-growing sport in Oregon for girls younger than 18.

Pena, who’s been in the wrestling scene either as a wrestler or a coach, since he was in middle school, has seen that to be true even in his kids club.

“There are about five or six girls on our team. And it’s getting bigger. One year it was her and one other, the next year it was three.”

He said Lili has helped with the increased numbers.

“She’s a big inspiration, not just to the other girls on the team, but just to all the kids in general, because she’s so much fun to watch.”

Wrestling is a sport that Pena believes everyone should try out.

Lili said she wants to wrestle for a long time.

With MU football on a hot recruiting stretch, here’s what lies ahead