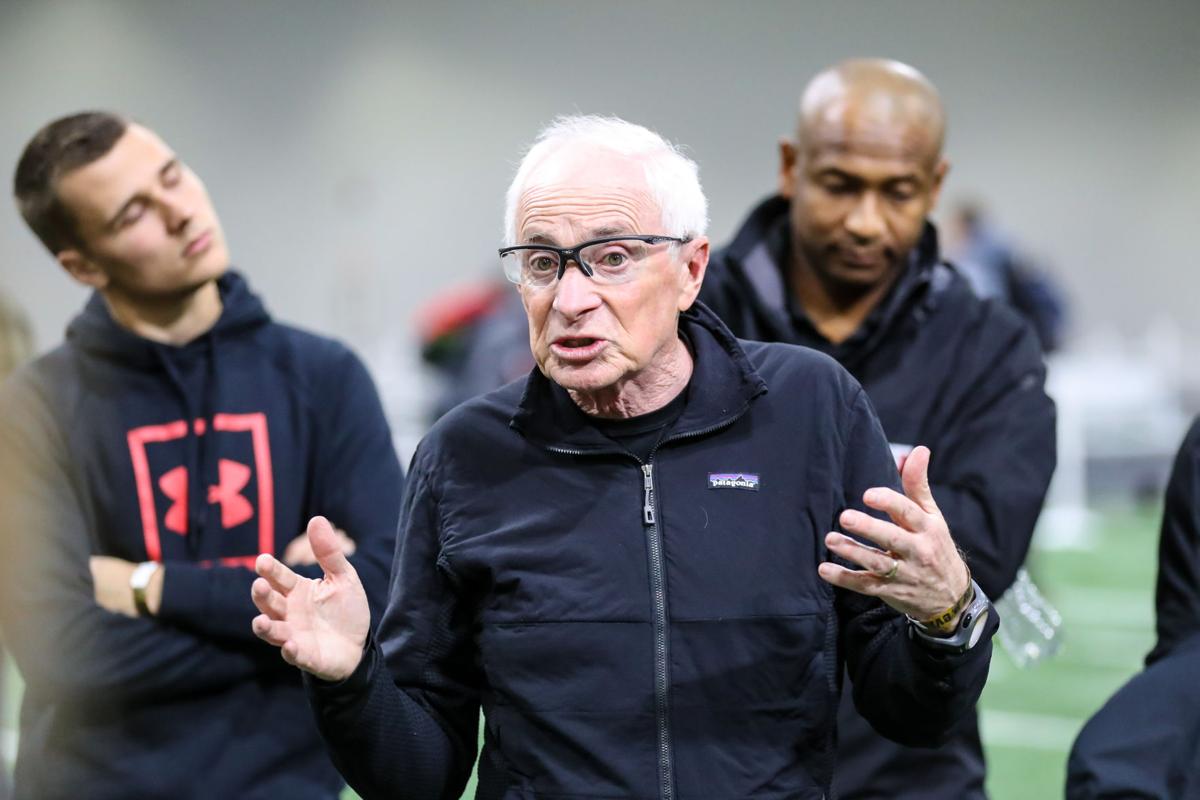 Mike Johnson, who has been the face of Western Oregon University’s cross-country and track and field programs, is retiring at the end of May after 18 years. 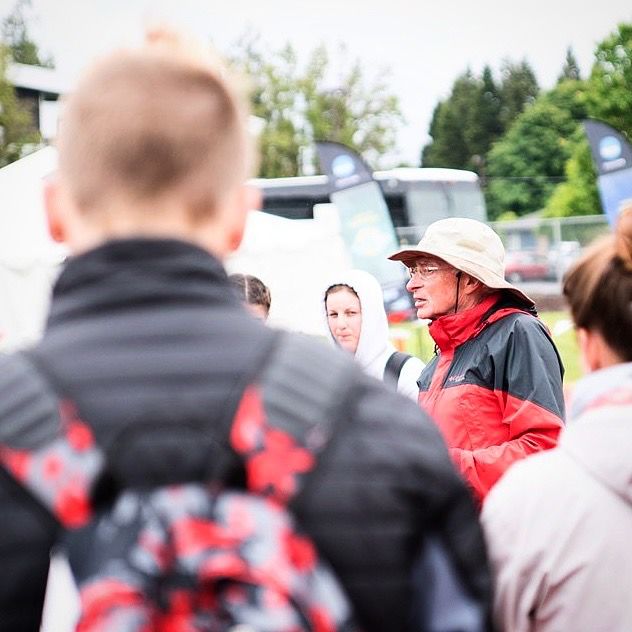 Mike Johnson, who has been the face of Western Oregon University’s cross-country and track and field programs, is retiring at the end of May after 18 years.

Words that aided him in the decision to retire at the end of May after 18 years at WOU.

His decision wasn’t made lightly — it’s one he’s been considering for a while.

“I think you have to pick a time,” Johnson said. “I think a lot of times, if you wait until you know it’s time, it’s too late.”

That philosophy came to him several years ago, when Johnson was up watching a late-night TV show; Billy Crystal was the guest, talking about a time he and Julius Erving went out to eat at a restaurant in New York after watching a Muhammed Ali fight late in Ali’s career.

“And across the restaurant is Joe DiMaggio,” said Johnson, reflecting on what Crystal said in the show. “And so Erving and DiMaggio wave at each other from some ways away, and when they’re all done with dinner, Crystal and Erving go up and say hello to DiMaggio; and all DiMaggio does is look at Julius Erving and takes his hand, and he says, ‘don’t stay too long.’”

Those words, ‘don’t stay too long,’ have stuck with Johnson since then.

“That’s not why I’m retiring, but that story runs in my head,” he said. “There’s a difference between staying too long and time to go. I don’t feel like my career is over, but my career as a head coach or even assistant coach at WOU is done.”

2017 and 2018 were big years for Johnson’s teams: In 2017, David Ribich, the most decorated student-athlete in school history and now a professional runner for Brooks Running Company, was crowned the regional champion in cross-country. He also helped the 2017 and 2018 indoor distance medley relay teams nab back-to-back national championships while also picking up a trio of individual accolades alongside teammate Dustin Nading.

Also in 2018, Nading went on to become a three-time national champion by defeating the field in the indoor mile at the 2018 NCAA DII National Championships.

To cap the 2018 outdoor season off, Nading and Ribich joined six other Wolves to be named All-Americans at the outdoor national championships in Charlotte, North Carolina: Kennedy Rufener, who went on to qualify and compete in the 2020 Olympic Trials marathon, Olivia Woods, Suzie Van De Grift, Megan Rose, Grayson Burke and freshman Darian Wilson.

Outside of WOU, Johnson has led six athletes to the US Track and Field Olympic Qualifiers - not including Ribich, who qualified this year to run at the trials before they were postponed; or Derek Holdsworth, who was to make his debut at the trials after breaking the school record and setting a new GNAC record in the indoor 800-meters race on Feb. 1 by clocking in at 1:47.74.

His accomplishments over the last 18 years at WOU, and forty-plus overall spent as a track and field coach, speak for themselves.

But if you asked Johnson why he thinks WOU’s track and field program is successful, he won’t tell you anything about the medals his athletes have received or how many athletes he’s sent to the Olympic Trials.

Instead, he’ll talk about how successful these athletes were in the classroom.

“But more importantly are the relationships you build and the trust you build with people, and those things to me are the more significant ones.”

“Johnson’s personality is one of a kind,” Ribich said. “When I think of Johnson, I think of a long-brimmed hat with a weather proof top, a long yellow rain jacket and a pair of retro kicks. In his pocket, a pen, his phone and a container of Zicam. I think of a fold of papers methodically written daily to give us what the task was at hand. I still have a crate full of them. Even being two years removed from his program, those workout sheets just seem to find themselves everywhere.

“To think that I only had Coach Johnson as my coach for four years would feel like a lie. He was incredibly involved with my life for four years that it truly feels as though I’ve known him for a lifetime.”

“The thing about Mike is that he can’t only be defined by the word “coach,” Vala-Haynes said. “He’s an educator, a philosopher, a scientist, a statistician, a public health promoter (do NOT come to practice sick), a counselor, a mentor, a proud father figure, a steadfast friend, and a storyteller. We all have our jokes about Johnson stories, and he’s such a good sport about it. I’ve been listening to them for the almost six years I’ve known him. They are his way of teaching us about the world - about inequity, circuitous paths to greatness, the value of intentionality, that life is often not fair, but also that there’s always a path forward and something new to believe in and be excited about.”

She said Johnson sees his athletes as whole human beings.

“That’s something I will carry with me as both a professor and volunteer coach,” she said. “Yes, there are the successes — the national champions and professional athletes — but he’s just as excited about one of our student-athletes who wants to become a leader in education policy. He’s a big-picture guy.”

She’s sad to see him go, but their relationship won’t end just because he’s retiring.

“So he’s retiring as the Western Oregon University head coach of cross country and track and field, or whatever the full title is, but that’s only one small part of who he is,” Vala-Haynes said. “He’ll continue coaching and carrying all those identities. And many of us will be lucky enough to remain a part of that. I’m sad that I don’t get to walk back to my car west through campus, look up to see his office light on, and climb the stairs to his office for a conversation about global geopolitics anymore. But I assure you I’ll be walking that same route and calling him on the phone. A lot.”

The relationships he formed with people like Vala-Haynes and Ribich are why he loves track and field.

“I just enjoy the people. I enjoy the sport,” Johnson said. “I like to see people improve. The nice part about track is that it’s so measurable, and the other part is it’s so individual. It’s an individual team sport. And so you can have some people in some areas who aren’t having success, but someone else still is. It moves you forward.”

There are a lot of people he named who had an impact on him over the years and helped him to become the coach he is now, but one person stood out from the rest: Don James — “Maybe one of the best college football coaches ever,” according to Johnson.

James and Johnson knew one another when Johnson was coaching at the University of Washington.

So what does a track coach learn from a football coach?

“In Don’s case, it was how to observe and organize a practice,” Johnson said. “Sometimes I would just sit there when I was done with my practice, and I would watch what he would do. You learned a lot from him, just the way he got stuff done, and hopefully I pass that on to some people that I’ve worked with who are coaching today.”

He’ll miss coaching at WOU. He was looking forward to his last trip to the indoor national championships, and one more spring season spent on the outdoor track.

Both were cut short because of the Coronavirus — the indoor national championships in Birmingham, Alabama, were canceled the day before the meet was to take place.

“We had just finished all our premeet preparations for the next day, and then we found out that the meet was canceled, and the spring season,” Johnson said.

In a span of eight minutes, as the news about the meet being canceled — as well as the outdoor spring season — came through, the rug was pulled out from under Johnson and his team. He didn’t expect his last coaching season would be emailing athletes training plans instead of working with them on the track, and he’s sad about that.

“We all wanted more out of it,” he said.

He may be retiring from WOU, but it’s not the end of the road for him.

Brees on kneeling during 2020 NFL season: 'I will never agree with anybody disrespecting the flag'