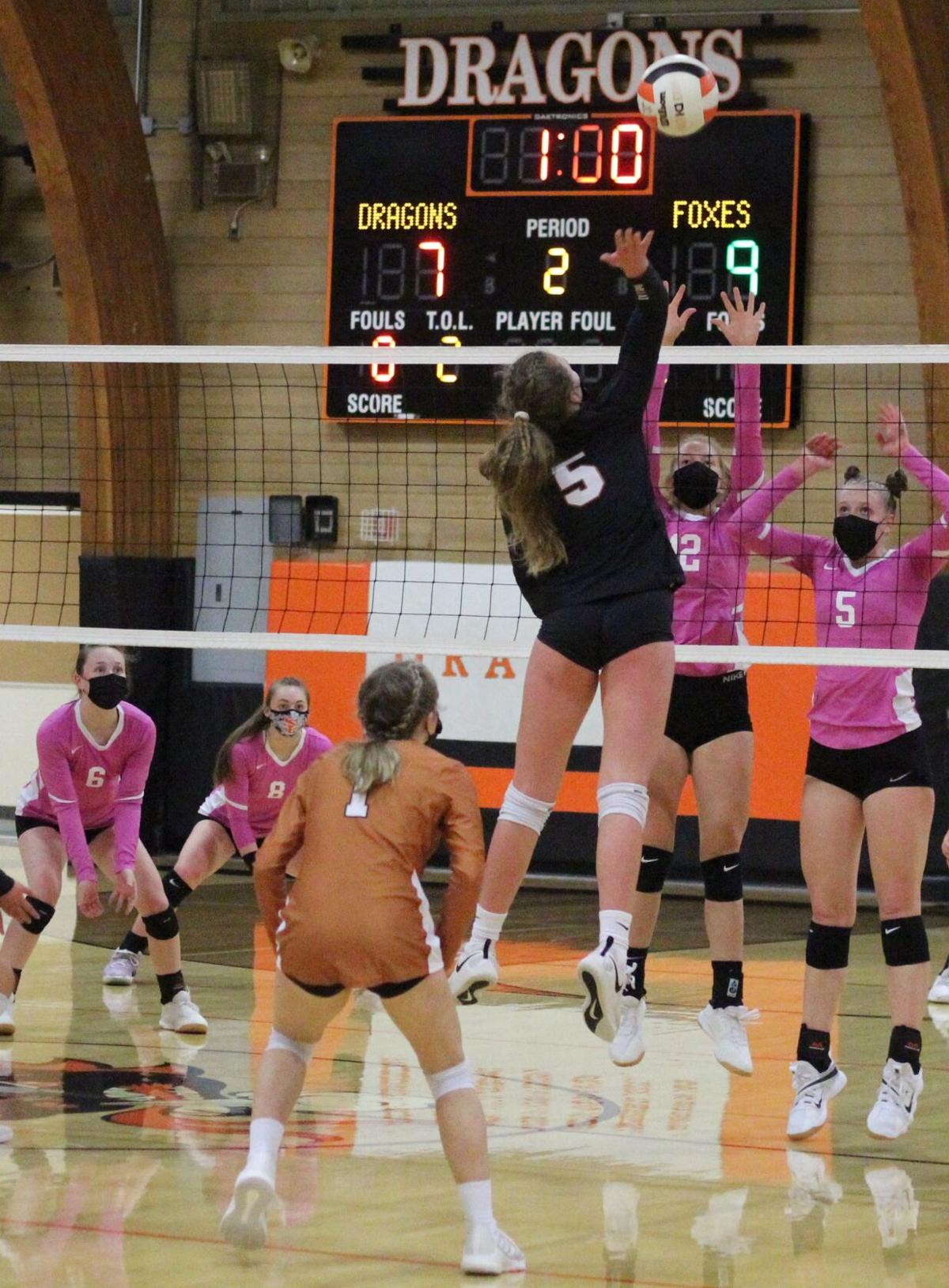 Dallas’ Ruby Earhart tries to get the ball past the defense of Silverton during the teams’ matchup on Monday evening. 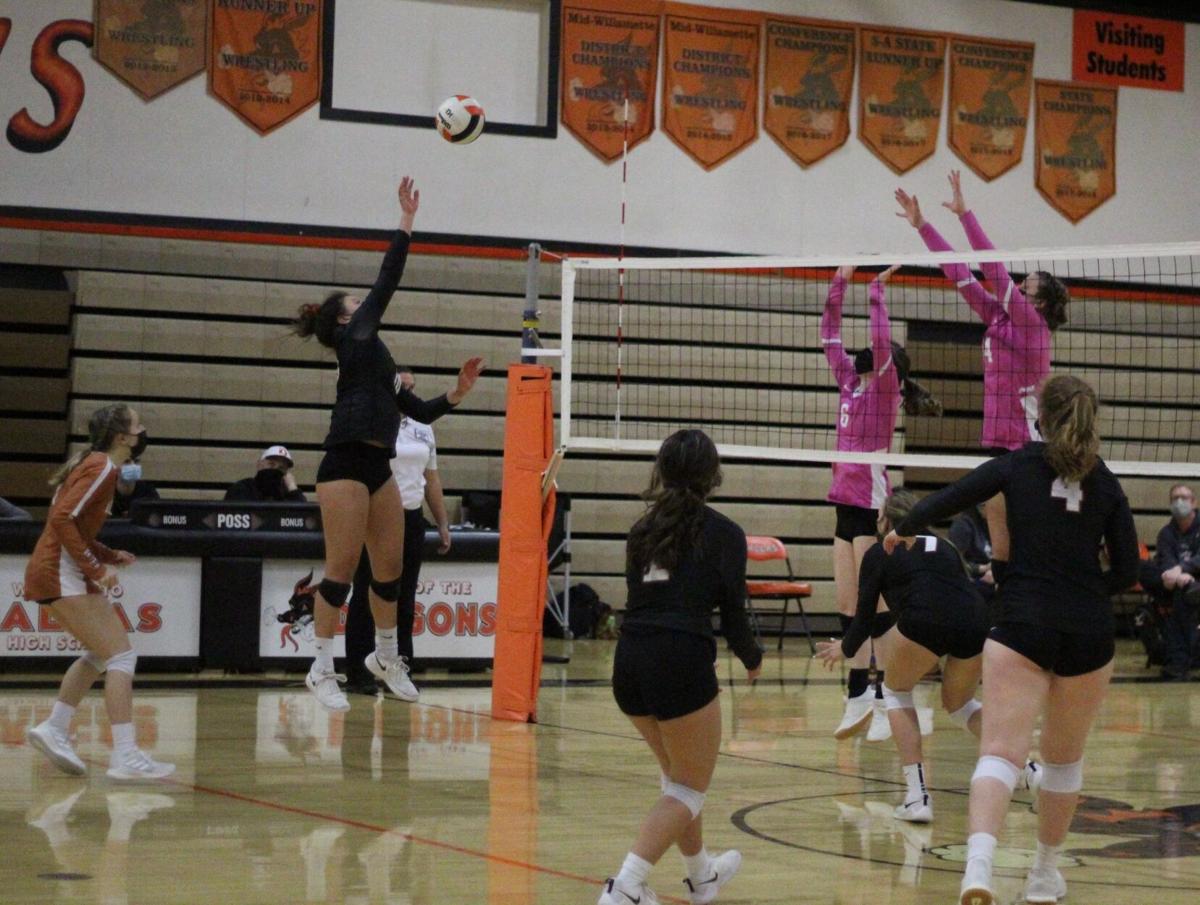 Dallas struggled in the first two sets of Monday’s loss.

Dallas’ Ruby Earhart tries to get the ball past the defense of Silverton during the teams’ matchup on Monday evening.

Dallas struggled in the first two sets of Monday’s loss.

DALLAS — The Dallas Dragons volleyball team breathed some fire Monday night in its matchup against Silverton, but it wasn’t enough to overcome an early deficit.

The Dragons (1-5, 1-2 Mid-Willamette Conference) were down two sets to none, and with the momentum with the Foxes (3-3, 1-1 MWC), it looked like it was going to be a sweep until the Dragons turned the tide in the back-and-forth third set. The score was tied 18-18 when the Dragon took a timeout.

After that, they clawed their way to victory 25-23 to keep playing.

The team left the court for the break between sets fired up. Coach Kayce Lilley said her players simply didn’t want to suffer defeat in the third set.

“We’ve been having a hard time with consistency in general, but they’ve gotten to the point where they are tired of things not going their way, and they just wanted to feel good no matter what the score board showed in the end,” Lilley said. “I think they showed that more in the third set, got a little more fire underneath them.”

Dallas carried that fire into the fourth set, but Silverton matched the intensity, and the set was close throughout. The Foxes pulled ahead 12-8, and Dallas took a timeout to regroup.

The Foxes had regained momentum, but Dallas didn’t go away quietly. The Dragons closed the score to 22-20.

But Silverton scored the final three points to win the set and the game.

“It’s a game of momentum. We struggled in a rotation, and we were in it for too long and had a hard time getting the momentum back on our side,” Lilley said. “They had some really scrappy defensive plays and it was really hard for us to come back from some of those.”

Silverton seemed to be in all the right places on the court in the fourth set.

“No matter what we were doing they were picking it up,” Lilley said.

She added that middle blocker Olivia Hale had a great game, which helped in the Dragons’ rally in the third and fourth set.

“She was blocking well and swinging a lot harder than she has been. It makes a big difference when she is carrying the load like that,” she said.

Lilley said the team has plenty highlights to build on from its performance against Silverton.

“I think our defense was a lot scrappier. That is something that we have been working on a lot in practice. We want to carry that over for sure,” Lilley said. “And then we just need to put the ball away a little bit more efficiently. That will be our focus at practice tomorrow, but then we have two big games the rest of this week. We are excited to see how it goes.”

The Dragons have a non-league match up against McKay today (Wednesday) on the road and a home game against conference foe Lebanon on Thursday. Both games are at 7:15 p.m.

On Monday, the Dragons played before a small, socially distanced crowd in its home gym, an experience the coach and the team weren’t sure they were going to have this year.

“We’re just so thankful that we get to play at all,” Lilley said. “For a long time, we didn’t think we would get anything, and then all of a sudden it was like, now we are going. We are excited that we are getting to play.”