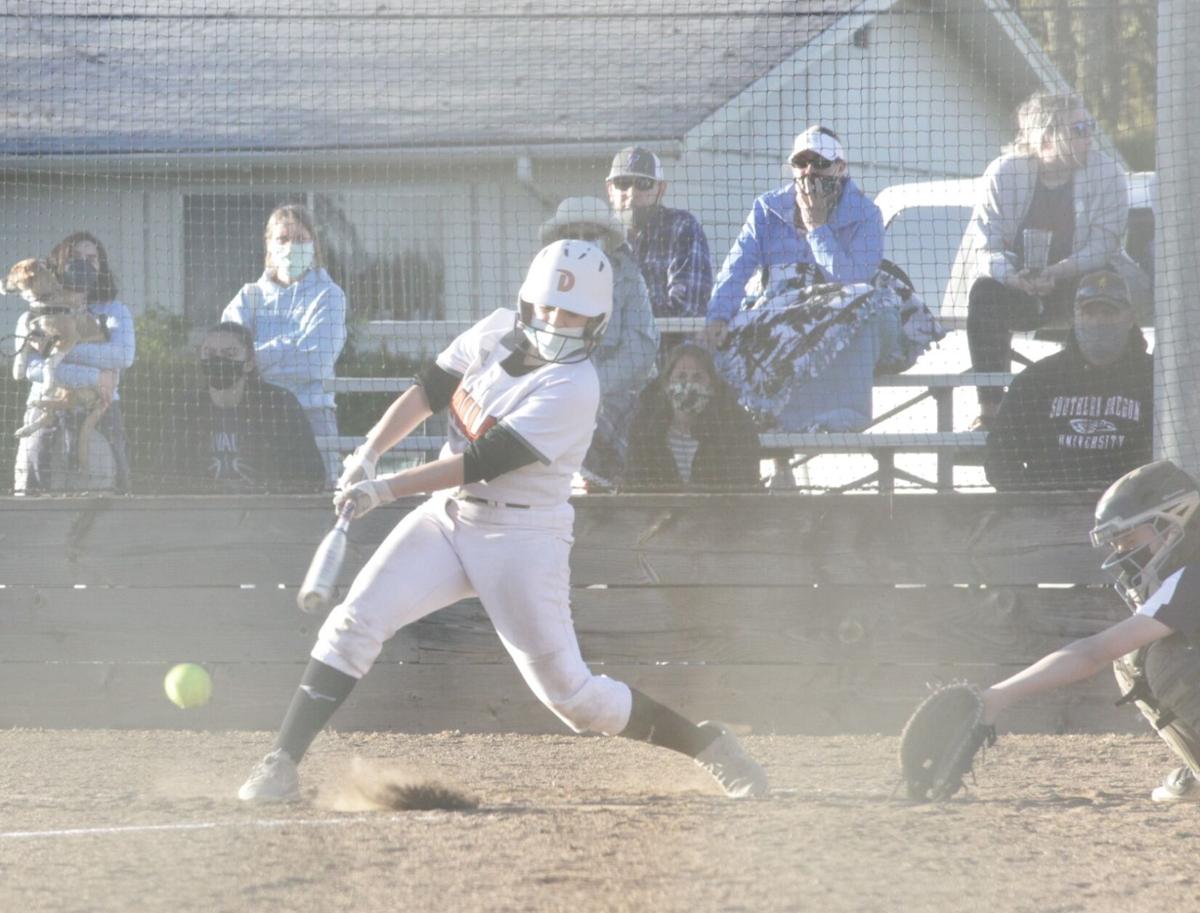 The Dallas Dragons softball team won a close game against Corvallis on April 14, emerging victorious with a score of 4-3. 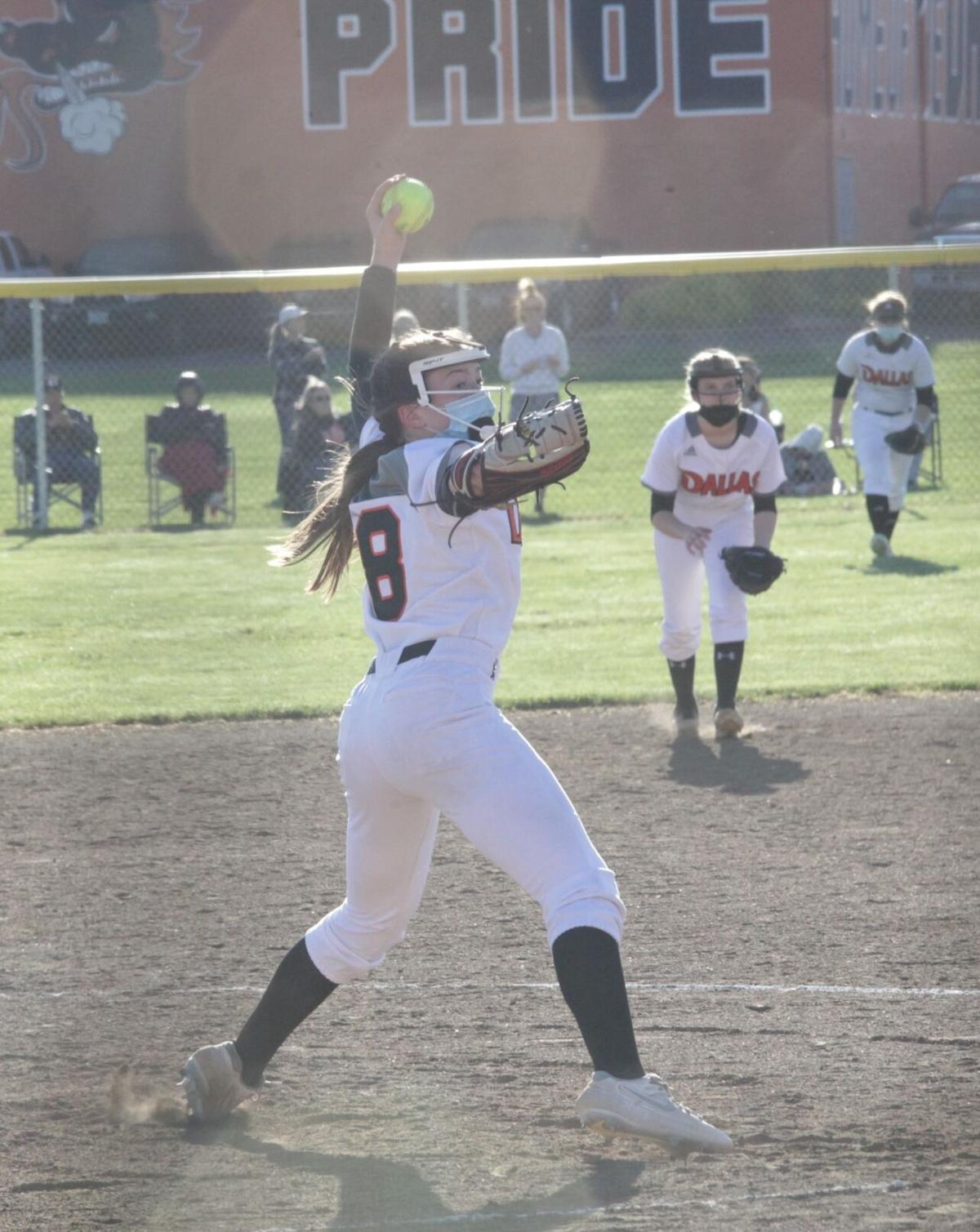 The Dallas Dragons softball team won a close game against Corvallis on April 14, emerging victorious with a score of 4-3.

DALLAS — A HOME RUN BY Dallas High School senior Maddie Doig capped a 10-inning game against the Corvallis Spartans (1-2 overall, 1-2 Mid-Willamette Conference) on April 14, which put the Dragons softball team (2-0 overall, 2-0 MWC) ahead 4-3 for its first league victory of the season.

Head coach Brandi Jackson is known for having high expectations for her team, and this season isn’t any different, despite the strange circumstances.

“We are a really young team, so I saw some good things and definitely some things we have to work on,” Jackson said. “But we also haven’t had the practice time that we’d normally get, so that’s been difficult, but we’re just focusing on one game at a time.”

The team is large this year, with 16 girls on the varsity roster.

“Every single one of them deserves to be on varsity,” Jackson said.

The Dragons had less than two weeks of practice under their belts last year before the season was canceled due to the coronavirus pandemic.

“That’s one of the reasons we kept such a big roster this season,” Jackson said. “We want to give the kids the opportunity to play; they need this mentally and physically during this crazy time, and I think it’s very important to be a part of a team and learn to play together.”

Sophomore Ruby Earhart put the Dragons on board in the second inning by hitting the ball out of the park, bringing senior Kacey Jordan across the plate as well for a 2-0 lead. From there, the team struggled at the plate, and it wasn’t long before the Spartans brought the heat and started putting the pressure on the Dragons by sending a runner across the plate to put their own score on the board.

A 2-2 tie was held by both teams for the next three innings until the top of the ninth, when Corvallis brought a runner home and took the lead 3-2.

With one more chance to score, Doig approached home plate and as soon as her bat made contact with the bat, the Dragons knew they had won. The ball soared across the field and over the fence to the cheers of the team and its fans.

The players were happy with the win, but still noticed some areas that could use work.

“We definitely have the potential to improve,” said senior Madelyn Loughary. “We need to work on getting the bats going when we have the chance,” echoed Doig. “We had a couple of great hits to start the inning, and we just couldn’t figure it out for the rest of the game, but overall I’m really excited for the season.”

When they were asked if they were sad there were no state playoffs to work toward this year, both players said they are just happy to be out here playing. Jackson is excited for this season because it gives the coaches a look at what’s coming up for the next few years.

“(The younger players) also get to learn from very talented upperclassmen that have been to the state playoffs, they know what it takes, and for the younger players to be able to play with them is only going to make them better, and so that’s a huge opportunity,” she said.

The Dragons demolished Lebanon (1-2 overall, 1-1 MWC) on Friday 8-1. The team returns to action today (Wednesday) at Sprague at 5 p.m. for a non-league contest.

Weekend WR transfers close book on rough recruiting stretch even as confidence grows for 2021, beyond

Spring post-op: What we learned, questions remaining, a stock-riser and more on the Husker DL