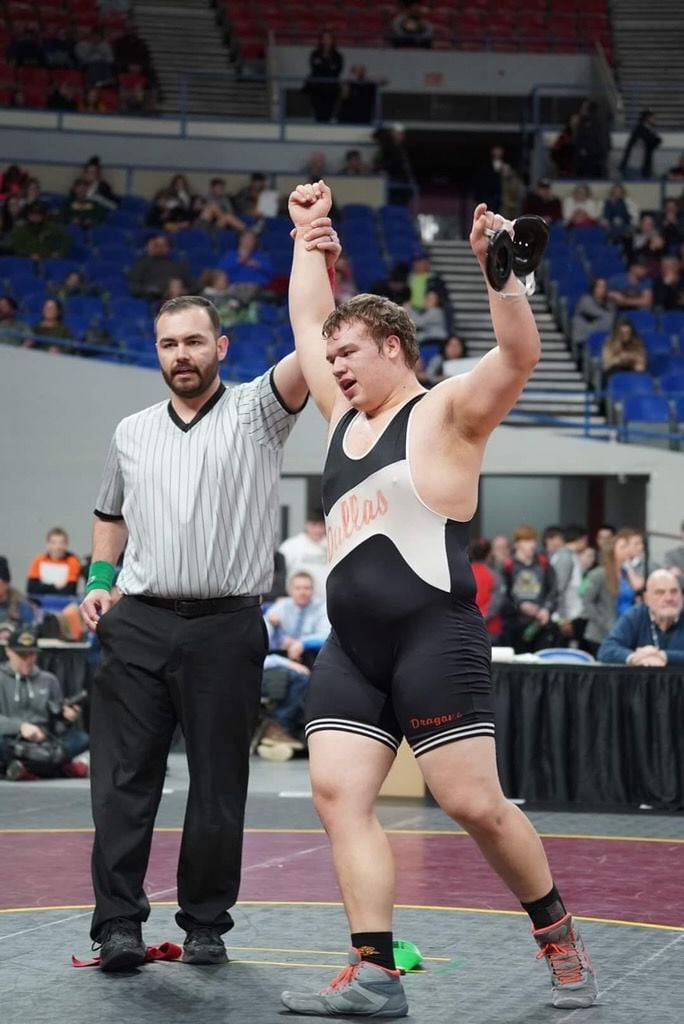 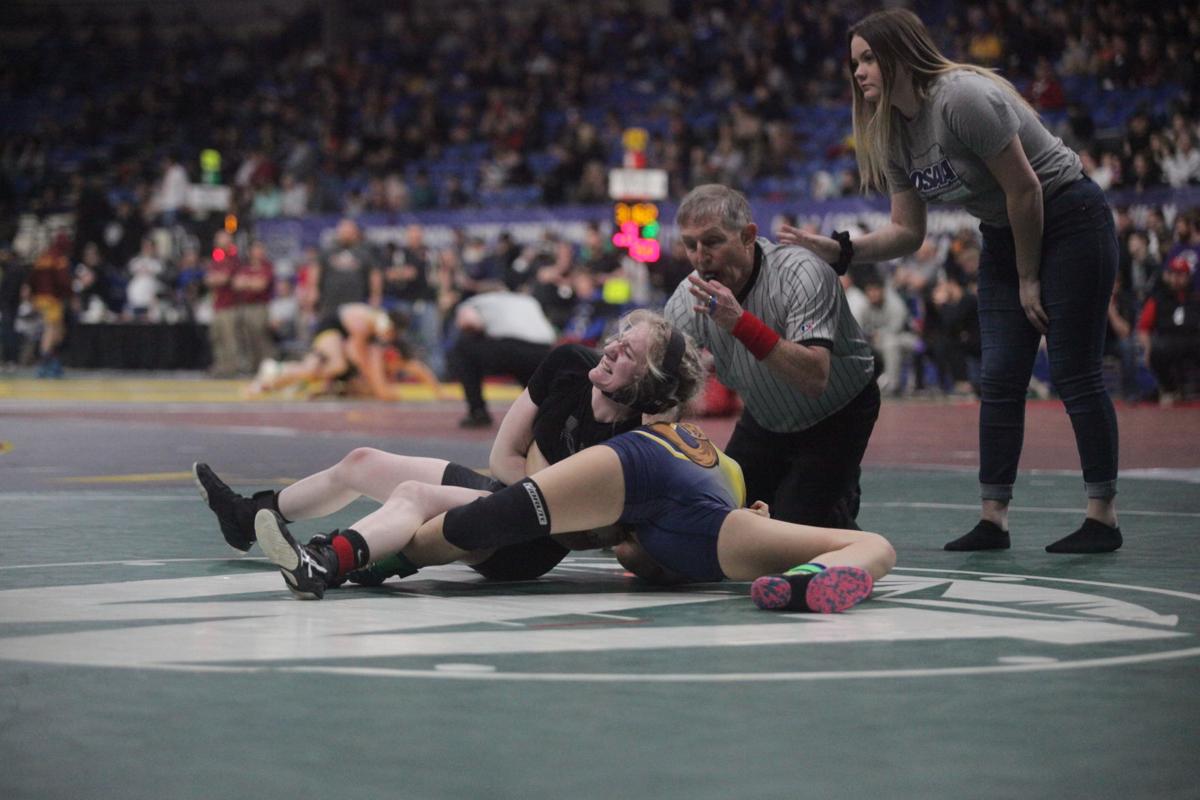 PORTLAND — Ashton Brecht did what he set out to do entering the 5A Oregon Schools Athletics Association state wrestling tournament: He became the 285-pound state champion.

At districts two weeks ago, after clinching the district champion title there, the senior from Dallas High School said, “I’m just going to go out there (at state) and try to win it.”

And win it, he did, pinning his opponent from North Bend in one minute and 25 seconds.

“I am super proud of Ashton’s state title,” said head coach Tony Olliff. “Ashton began wrestling as a sixth grader for Austin Markee down at LaCreole Middle School. He has put in countless hours beyond the season, and he always picks the most difficult sparring partners to compete against in practice. He loves wrestling, is extremely coachable, and has done everything I could ask for in order to get better. He earned this.”

Earlier in the day, junior Kimmy Holgate ran over to one of her coaches, Walt Markee, and jumped into his arms for a big hug. She had just defeated Bend High School’s Analise Smith for third place.

This was her first time going to state.

“I feel amazing right now,” Holgate said. “I feel pretty proud of myself that I placed in state.”

She started the tournament off by beating Smith on Friday with an 18-0 defeat.

“Then my second match, which was today, I lost to (McKay’s Tess Barnett). I was like, ‘well, crap, that bumped me out of first and second, so I was like, ‘OK, I have to get third or fourth. And I didn’t want to get fourth, so my mind was on third.”

In the consolation semifinals, Holgate went up against Emma Jones from Scappoose, the girl she had beat at districts.

“I went out and … I scared her a few times,” Holgate said. “I kept faking a shot and she didn’t know what to do with that, and then I pinned her.”

Before the match for third or fourth place, Markee and Dave Lavier told Holgate that it didn’t matter if she got a pin or points - just that she needed to win.

When Holgate got the technical fall against Smith, she said, “I looked straight up at my dad (in the audience) and was like, ‘yeah.’

This is the biggest stage Holgate has been on, and she said she was a little nervous going into it.

“And then once I lost my second match, I was like, ‘OK, I just need to shake it off and go into my next match with a clear head, and that’s exactly what I did,” she said. “That’s what Walt (Markee) told me to do every match and it worked.”

She gives her coaches all the credit.

“I couldn’t have done it without them, Walt (Markee) and Lavier.”

Markee said he and the rest of the DHS coaching staff are very proud of her.

“I believe Kimmy placed in state because she has realized her own potential,” he said, “and she is ready to put the extra work in required of her this spring to be able to come back next year and be the first girl from DHS to win the state tournament.”

Other Dragon wrestlers who placed at the tournament include: Junior Cael Morrison, who took fifth place at 132; senior Cooper Hise, for fourth place at 195; and freshman Isaac Jones, picking up fifth place at 113.

“This season was difficult,” said Olliff. “Losing senior Jerod Coxen to injury, returning state placer, winner of the Rose City, and Pac Coast tournaments, was a huge hit. We also lost a slew of wrestlers to maturity and commitment issues, but by the end of the season, we had wrung the team out, and we were down to the dedicated, fun-to-coach few. My favorite two weeks were the district and State tournaments.”

While the team will graduate several wrestlers this spring, Olliff is ready for the program’s future.

“I’m excited about the future of Dallas Wrestling, with three freshman scoring points in the state tournament. We may not win a state title any time soon, especially with Crescent Valley’s recently developed ability to acquire state champions from all across the state of Oregon, but we can compete against every other school in the state.”

Amid civil unrest, Packers players speak out, hope for change