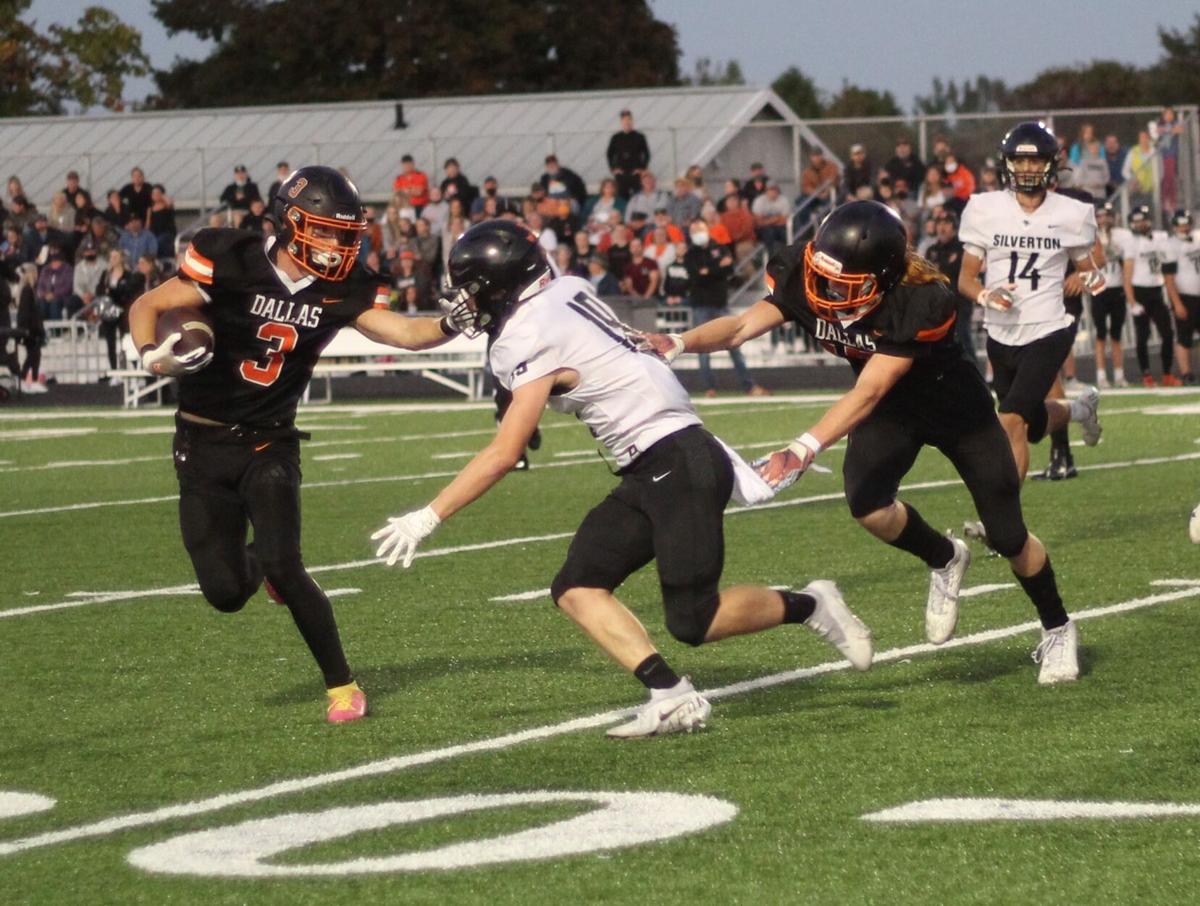 Dallas running back Logan Person runs with the ball during the first half of the Dragons’ loss to the Foxes. 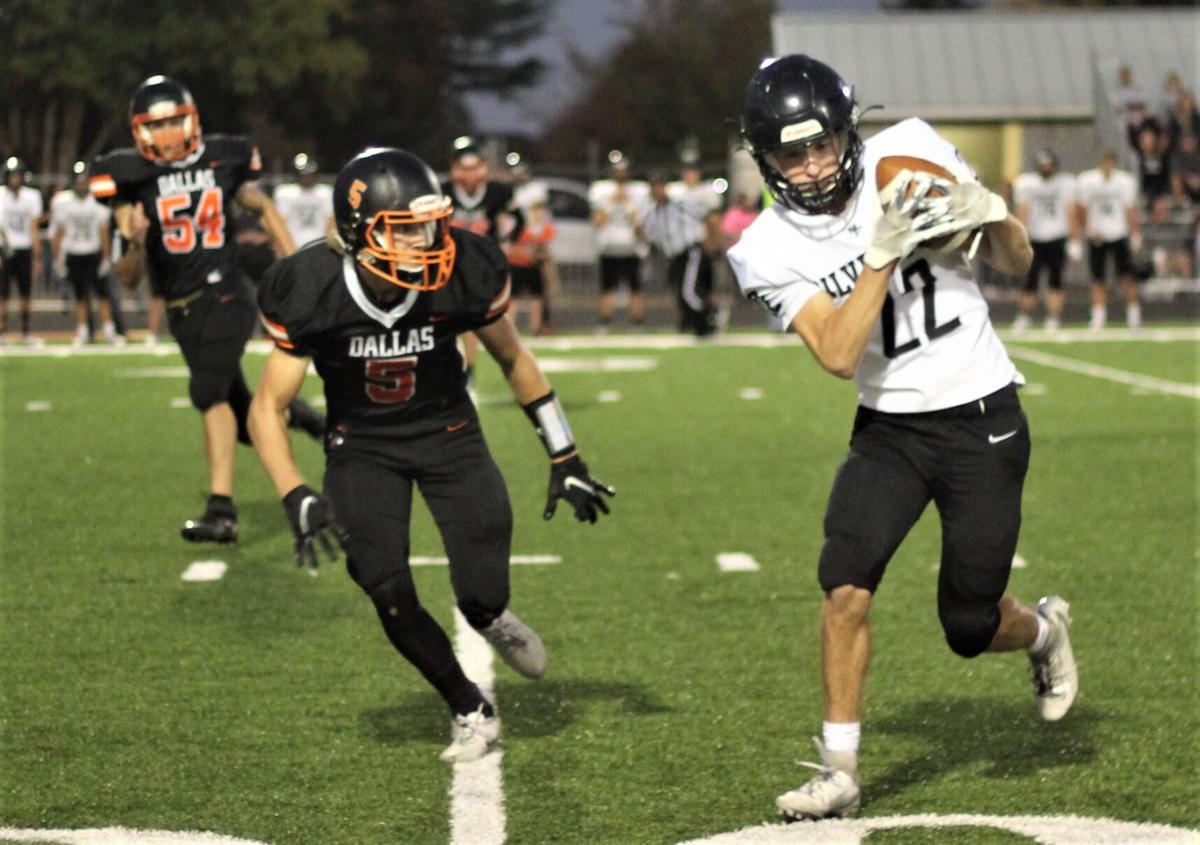 Dallas running back Logan Person runs with the ball during the first half of the Dragons’ loss to the Foxes.

DALLAS — The good news for Dallas was that the Dragons were back to work less than 24 hours after their downer of a football game Thursday against Silverton.

The game? A 42-7 loss not much worth lengthy reflection.

The Dragons did reflect some on it the following day, of course, watching video. But it wasn’t long until they began to think about something more important now — themselves. That’s what their practice was all about on Friday, and what it was about early this week as well.

“We are focusing on ourselves,” coach Andy Jackson said. “We obviously were unhappy with the performance Thursday night, but the kids responded well and practiced really hard.

Dallas dropped to 1-3 overall and 0-2 in Class 5A’s Special District 3. The Dragons went from eighth to 21st in the Oregon School Activities Association rankings.

South Albany came away with a 21-19 victory last week at Lebanon, after playing Silverton tough, losing only 14-2 at Silverton on Sept. 17. So Dallas will have to be better — a lot better — than it was last week to snag a victory.

What did happen to the Dragons against Silverton?

“We came out very flat,” Jackson said. “We didn’t play the way we know how to play.

“Silverton is a good team, and we just did not come ready to battle. We weren’t playing with emotion and passion, and you can’t do that against a top-tier ball club. I’ve prided our group all the time on attacking people and playing with fire and intensity, and I didn’t see that.

“I’ve got to do a better job of preparing them, and the players need to step up and come together as a group and put the team first.”

In the first half, Dallas made seven first downs — and punted five times.

The Dragons’ score came with 2:12 left in the half on a sideline pass from senior quarterback Ashton Foster to junior wide receiver Kolby Johnson-Sallee, who slipped past his defender and outran the pursuit down the sidelines to complete a 48-yard play.

Silverton scored on a nine-play, 68-yard, 4:36 march midway through the third quarter, and the ensuing running clock with the 42-7 advantage made the rest of the game go quickly and uneventfully.

Silverton finished with 312 yards passing and 240 rushing yards on 32 attempts.

But as good as the Foxes were on offense, they were just as dominant on defense. They held Dallas’ ground game to 52 yards on 29 carries, with 11 plays for a loss and two others for no gain. In the air, Foster and his receivers were 5 of 13 for 103 yards, including the TD play that went nearly half the length of the field.

Key for Silverton was that it stuffed Dallas standout back Logan Person, giving the senior no room to run, especially wide.

“A lot of people try to stop him, because he’s a good ballplayer,” Jackson said. “That’s why we push the ball around to a lot of people, or try to, because it helps keep us balanced. But it’s not easy when we’re not taking care of business up front and not finishing blocks.”

Silverton coach Josh Craig liked the way his defense got after things, and after Person in particular.

“He’s a great running back,” Craig said. “We were fortunate to bottle him up. Our outside linebackers had a really good game. We have good team speed, and a team that runs laterally kind of plays to our strength. And our D-line played a lot better (than the previous week). We were rallying to the ball.

“All the guys were communicating out there. They played with confidence and played fast and loose.”

Among the few other highlight plays for Dallas were some Silverton passes broken up and a fourth-and-goal sack by senior Yitsak Ostrom and company on a red-zone stop at the end of the first half.

On offense, junior Emilio Miranda picked up 22 yards to the Silverton 20 when he rolled over would-be tacklers and kept going on a determined, first-quarter run.

Overall, though, it wasn’t pretty.

“I’m not going to sugarcoat it,” Jackson said. “We didn’t play a good football game.

“We all know there’s only one direction for us to go, and that is to get better and worry about one day and (practice) rep at a time.”

If you're interested in Nebraska's OC search, it's a good idea to watch football this weekend