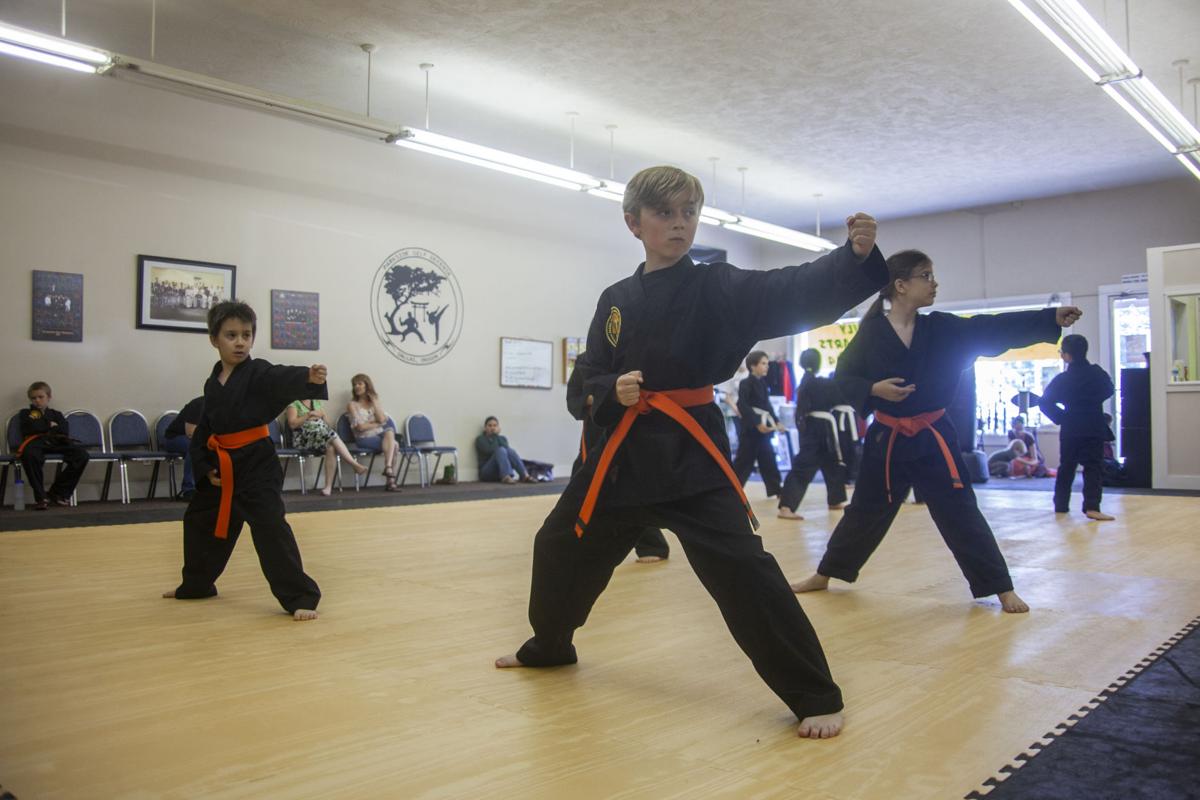 Students at Parkside Self Defense practice the form that coincides with the orange belt, and which they will have to know for their next belt test. 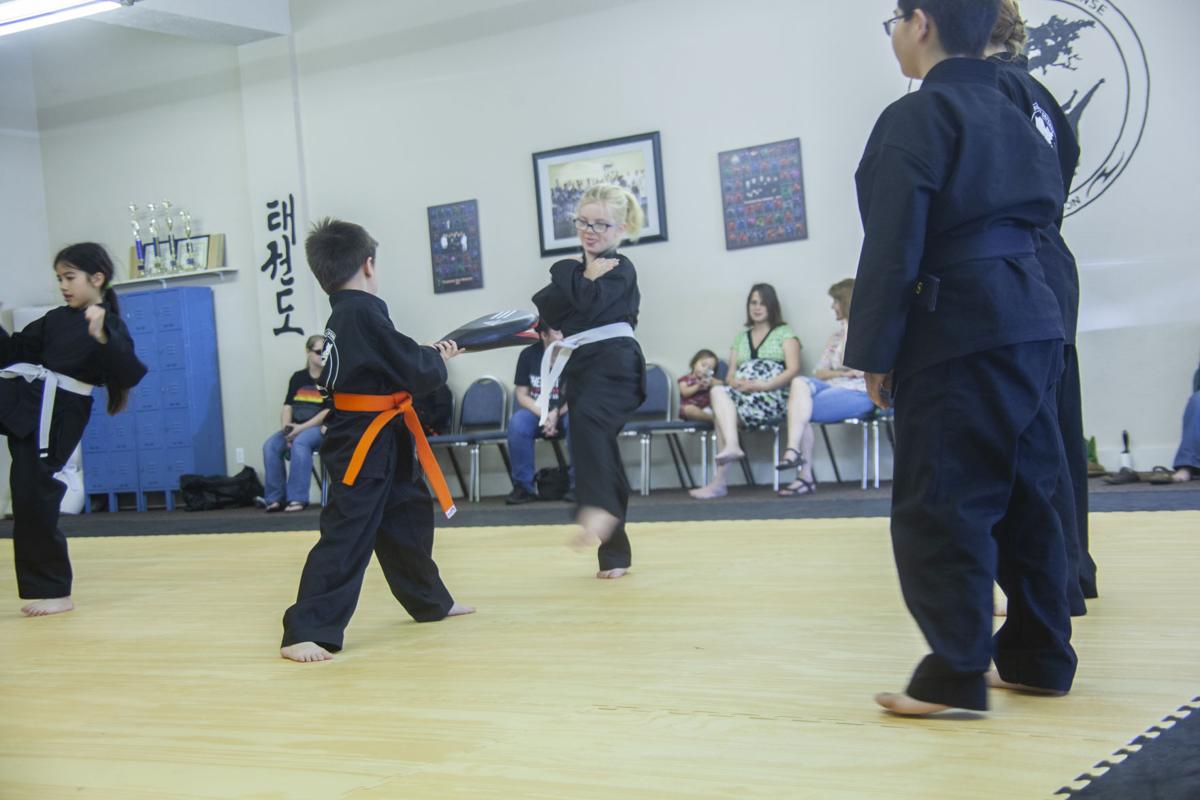 Two students practice a kick against a pad during class on Wednesday, June 20 at Parkside Self Defense

Students at Parkside Self Defense practice the form that coincides with the orange belt, and which they will have to know for their next belt test.

Two students practice a kick against a pad during class on Wednesday, June 20 at Parkside Self Defense

DALLAS — Parkside Self Defense, a Taekwondo and mixed martial arts school, offers more than just martial arts: it offers students a way of life, on and off the dojang.

That’s what instructor Rhey Javins hopes to instill through his training.

“My philosophy in martial arts is basically, it’s the way of life, and you want to teach life skills to your students,” Rhey said.

Rhey and Kevin Whaley, who are both instructors at the school, built Parkside from the ground up in July 2014. In the beginning, they had five students. Now, attendance is around 40.

The school’s practice involves a mixture of martial arts to create well-rounded martial artists, but the base of it all is Taekwondo.

Students at this school are organized by age and belt color, from white all the way to first degree black belt, which typically takes three to four years of commitment and training to obtain. Each belt color has different defensive moves and knowledge the student must learn, as well as forms they must memorize to move onto the next belt. A form is a series of systematic martial arts techniques that demonstrates a handle on factors including balance, energy, speed and control.

Also emphasized in a student’s training are values for everyday life.

“What we teach here are the five tenants of Taekwondo; it’s ingrained in everybody,” Rhey said. “So that’s courtesy, integrity, perseverance, self-control, indomitable spirit. They carry that with them here and also outside (the dojang). Uphold the five tenants, always.”

Rhey began practicing martial arts in 1995, doing so to help control his overactive mind and body.

“I knew for a fact I had ADHD or ADD, I don’t know which one it was, but I started working out intensively at age 16, riding my bike to the (martial arts) school, which was like a 10-mile ride. I rode there and back, three hours a day. It was a lot of fun though.”

On top of Taekwondo, Rhey is proficient in Kali, Jiu-Jitsu, Wushu, Tai Chi and street defense. All of this knowledge in the many facets of martial arts influences his training techniques as an instructor at Parkside. He is now a fourth degree black belt and goes for his fifth degree next summer, where he will officially become a Master. His wife, Sarah, was assistant instructing beside him until she recently became pregnant with their second child. Their first child, Talia, who is two, can often be seen running around the dojang.

Taekwondo is a practice that offers multiple benefits to everyone who wants to train, but it especially gives young adults and children a way to channel their energy.

“(It’s) discipline,” Rhey said. “Makes them focus. It’s a confidence builder. We always encourage a ‘yes I can’ attitude. Nothing is impossible.”

It also teaches them how to stick with something, even when it gets difficult.

“When you get a kid that’s really passionate about it, it teaches them commitment,” Sarah said.

April Leaton, a 16-year-old student at Parkside, knows first-hand what Taekwondo can provide for a person.

“When I first started (at Parkside), I had never been around people,” she said. “I had just started a public school because I’ve been homeschooled my entire life, so I couldn’t talk to people. After doing martial arts, I’m able to go up to strangers and I can have a conversation with them; I can now do speeches in front of my class just fine. It has given me a lot of confidence and I’m physically stronger, so that’s always good.”

Leaton is a purple belt, and hopes to receive her black belt and become an instructor.

Another student, Hayden Petersen, says he loves everything about Taekwondo, and that it helps him to focus better at school. He’s been practicing for about six months and is currently an orange belt. His goal, he said, is to become a black belt.

Rhey keeps the atmosphere in the school fun but students know when it is time to get serious.

“I love teaching,” Rhey said. “This is what I wanted to do in life and I’m here.”

For those who are interested but still feeling uncertain, the school offers a free week, where an individual ages four and older can try all of the classes offered.

There are also free self-defense classes offered multiple times a week, and is open to whoever has an interest.

“We want to make sure that’s open to the public.” Sarah said.

Sarah knows what it’s like to be in a helpless situation: she was robbed at gunpoint in 2012 and decided shortly after that experience to learn martial arts and self-defense. It’s how she and Rhey met.

The school also offers family classes, so parents and their children can learn side-by-side.

Whether it’s for exercise, to pick up a new hobby, or to learn some discipline, Parkside Self Defense encompasses all of those things.

For more information on the instructors, class schedule, pricing and more, visit their website, parksideselfdefense.com, or call the office phone: 503-751-1444.