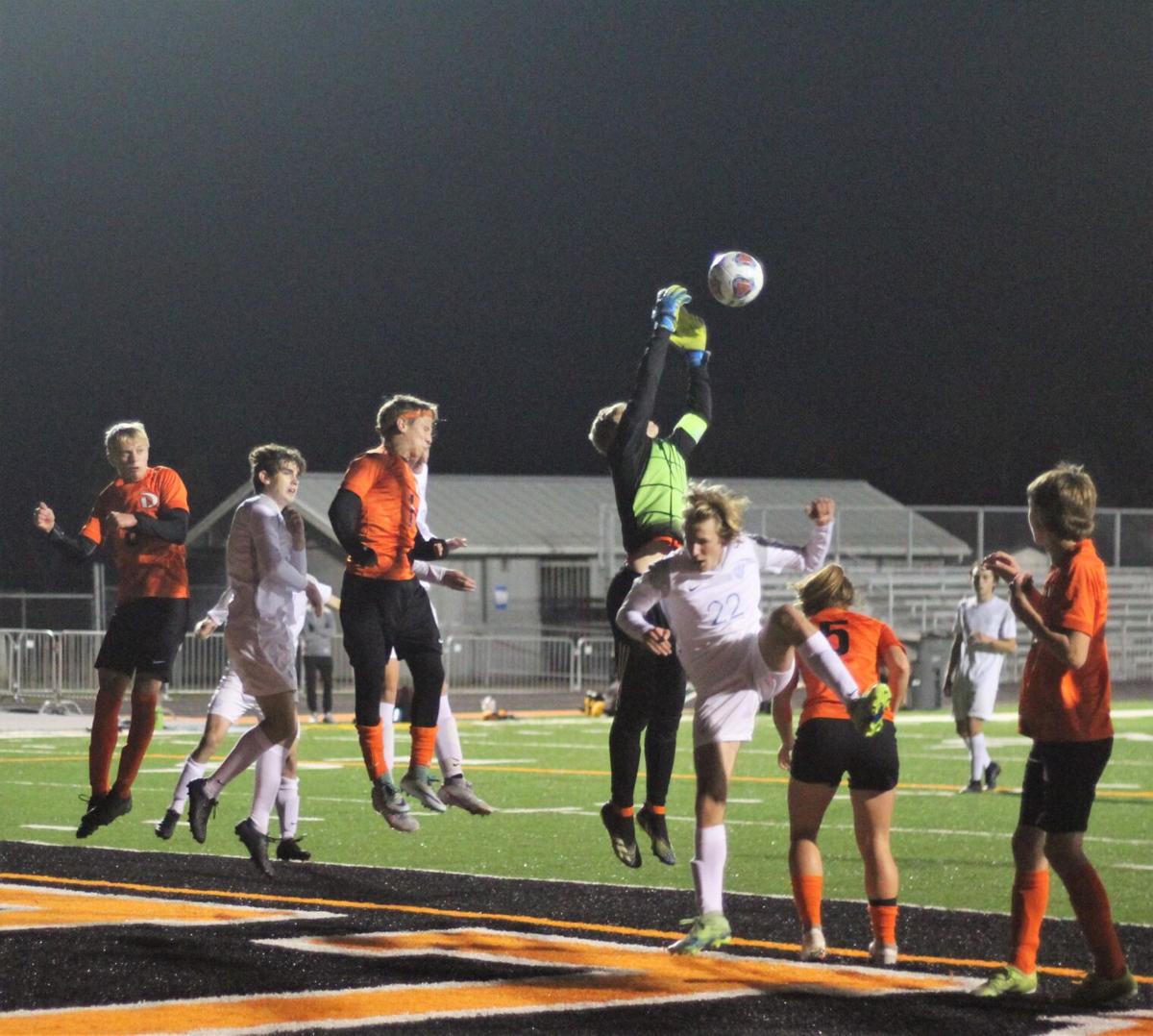 Dallas goalkeeper Royce Lavier leaps to catch the ball after a corner kick in Thursday’s game against Corvallis. 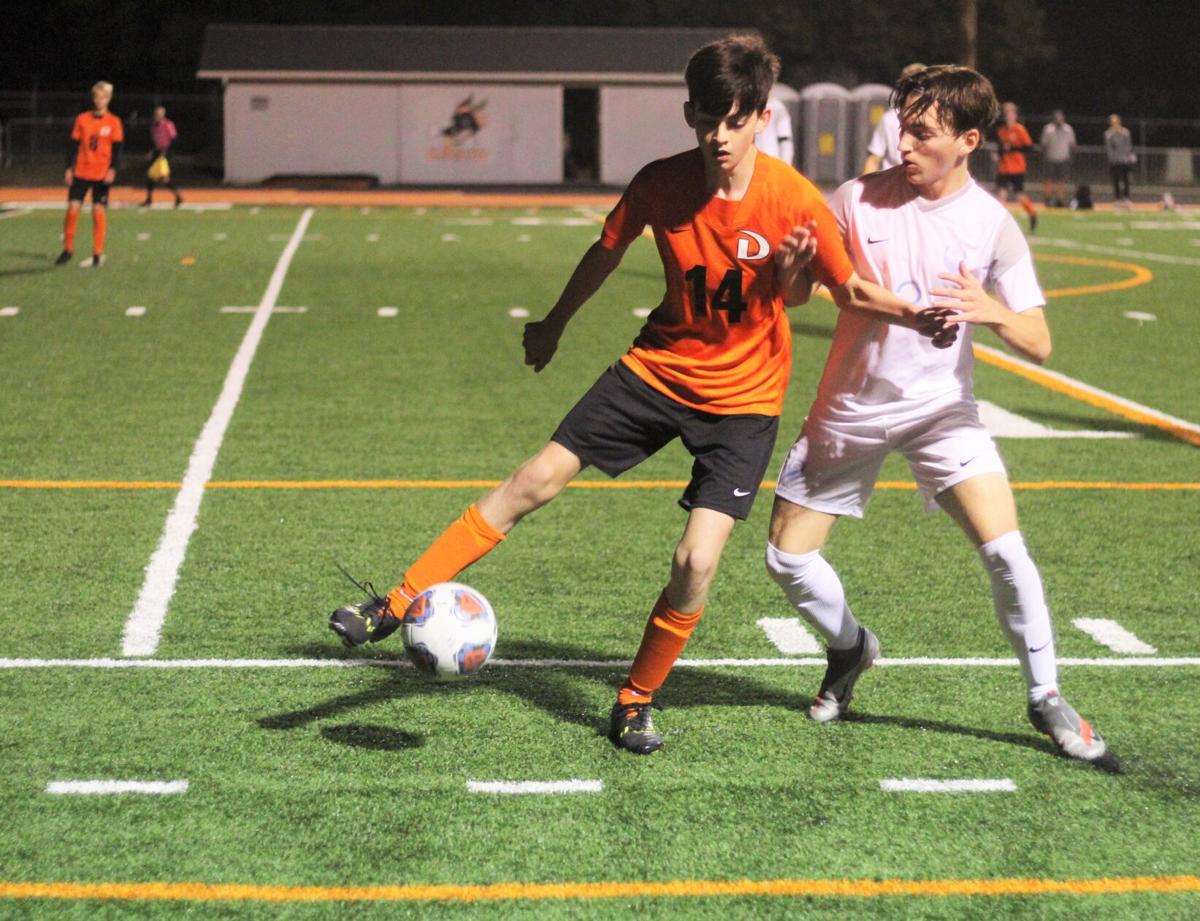 A Dallas player fights for the ball during Thursday's game with Corvallis.

Dallas goalkeeper Royce Lavier leaps to catch the ball after a corner kick in Thursday’s game against Corvallis.

A Dallas player fights for the ball during Thursday's game with Corvallis.

INDEPENDENCE — Central’s first Mid-Willamette Conference boys soccer victory of the season was one the Panthers really wanted. It came on Oct. 12 at home over Dallas, 3-1. “The kids were inspired and came out strong,” Central coach Jose Becerra said.

Central snapped a 1-1 halftime tie with a couple of early second-half scores, then kept up the pressure. Becerra said his team was able to enjoy 80 percent or more of the possession right from the start.

“The first 10 to 20 minutes we were knocking on the door,” he said. “We had a couple of one-on-ones with the keeper and didn’t put them away.”

But then senior Andy Rincon slotted in a ball off a corner kick for a 1-0 lead. It held up until the final five minutes of the half, when a long ball by Dallas turned into a Central miscue as the ball got behind the defense and set up a Dragons goal by junior Isaac Jones.

During intermission, “we had a little chat about being smart around the goal,” Becerra said. The Panthers went back in front on an own goal. Three minutes later, Rincon got the ball to senior Kaleb McArthur, who set up junior Edwin Pattoquin for a score.

“The boys played well,” Becerra said. “I wish we had put a few more chances away, but the ball was mostly on Dallas’ half of the field.”

Central returned to action two days later at Lebanon and managed a 3-3 tie with a dramatic rally at the end.

“We have come a long way this season, with many lows and highs, but this is surely one of the best moments,” Becerra said.

Junior Edwin Parroquin’s goal evened the count at 1-1, but Lebanon led 2-1 at the half. The Warriors went up 3-1 with about 15 minutes remaining. Central senior Kaleb McArthur made it a 3-2 game a couple of minutes later.

The Panthers continued to attack and create chances. Senior Elijah Jones’ short header went over the crossbar. Senior Charles Garcia got on the end of a cross, but couldn’t get the ball inside the far post.

With one minute left, Jones was fouled going up for a ball near midfield. Becerra had senior goalkeeper Saul Esquivel come forward to take a long free kick. He curved a ball around the Lebanon wall and past the keeper for the tying goal with 30 seconds on the clock.

“I was very proud of our players,” Becerra said. “They played like a real team and really wanted to win or one another. We didn’t get the win on paper, but it sure felt like one to all of us.”

The Panthers thus finished the week with a 2-7-2 season record and 1-4-1 MWC mark. They have three games remaining this season, with Silverton visiting Central at 7 p.m. on Thursday.

The Dragons lost 8-0 at home Thursday to Corvallis and has three games left as well, starting with a 7 p.m. Thursday home match against South Albany.

“He’s impressing many of the other coaches and putting up an impressive number of saves in each game,” Dallas coach Tariq Miller said. “I’m sad that this is his senior year because if I had more time with him I think he could truly be an unbreakable player.”

The Titans bounced back last week, dropping a 2-1 decision at home to McKay, then winning 3-1 at Sprague on Thursday. A big save by senior Chigo Odoemelam helped West Salem go into halftime at 0-0 on Sprague’s Senior Night.

Senior Kaden Young gave the Titans a 1-0 lead when he drilled home a 30-yard free kick early in the second half. A little later, junior Isaac McDonald redirected senior Zanden Montgomery’s header into the goal for his first tally of the season. Sprague pulled to within 2-1 with about three minutes left in the game, but with one minute to go, West Salem junior Drew Zohner found space despite having two defenders on him and struck a shot from outside the penalty box that found the top corner of the net.

West Salem coach Sean Young said his team showed “heart and matched the intensity of Sprague to pull out a well-deserved victory.”

The Titans went into Tuesday’s game at No. 1-ranked Summit tied for third in the Mountain Valley Conference at 3-2-0, and 7-4-1 overall. Summit was 10-0-1 overall through last week. West Salem remains in good position to make the Class 6A postseason. The loss to McKay came with three West Salem starters absent and two others coming out with injuries.

“We ended up having to put our goalkeeper on the field,” Sean Young said. “So I was proud of their effort in spite of the score.” West Salem was square with McKay at the half, 1-1, on a “super difficult volley” goal

Jim Polzin: Packers positioned for regular-season success after grinding out a victory over the Rams