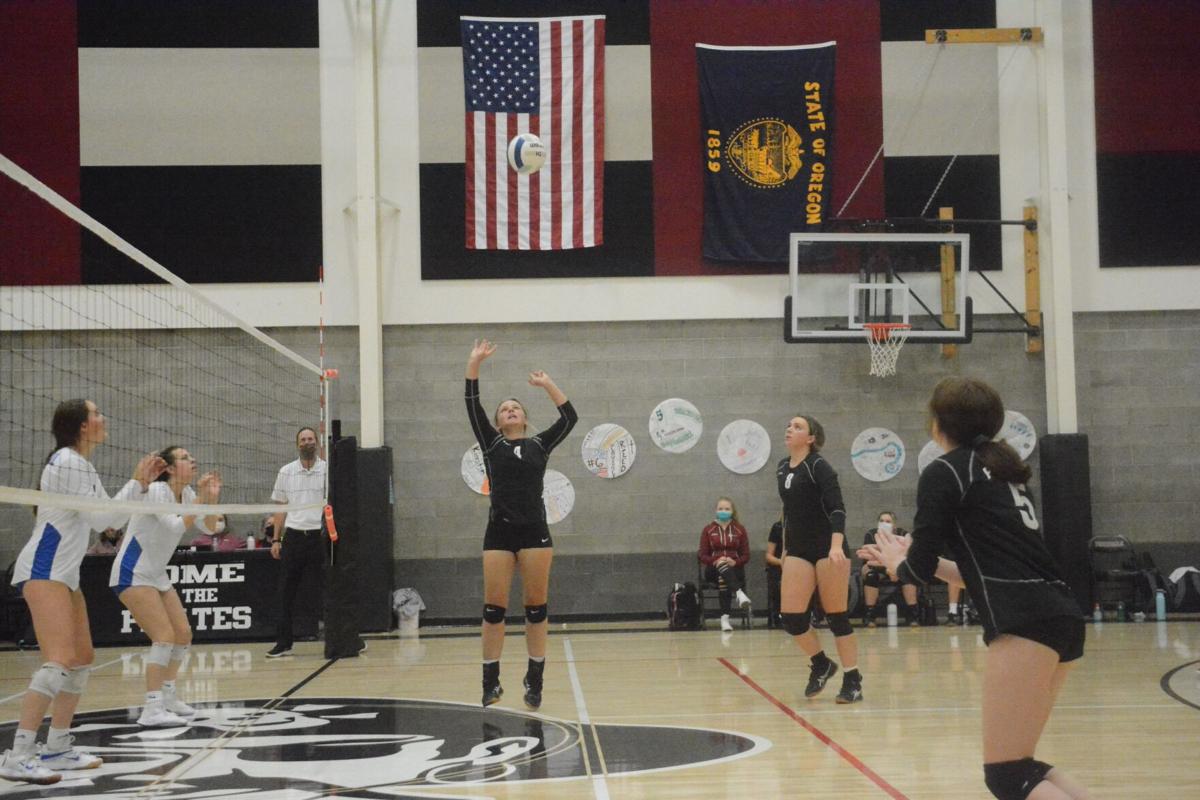 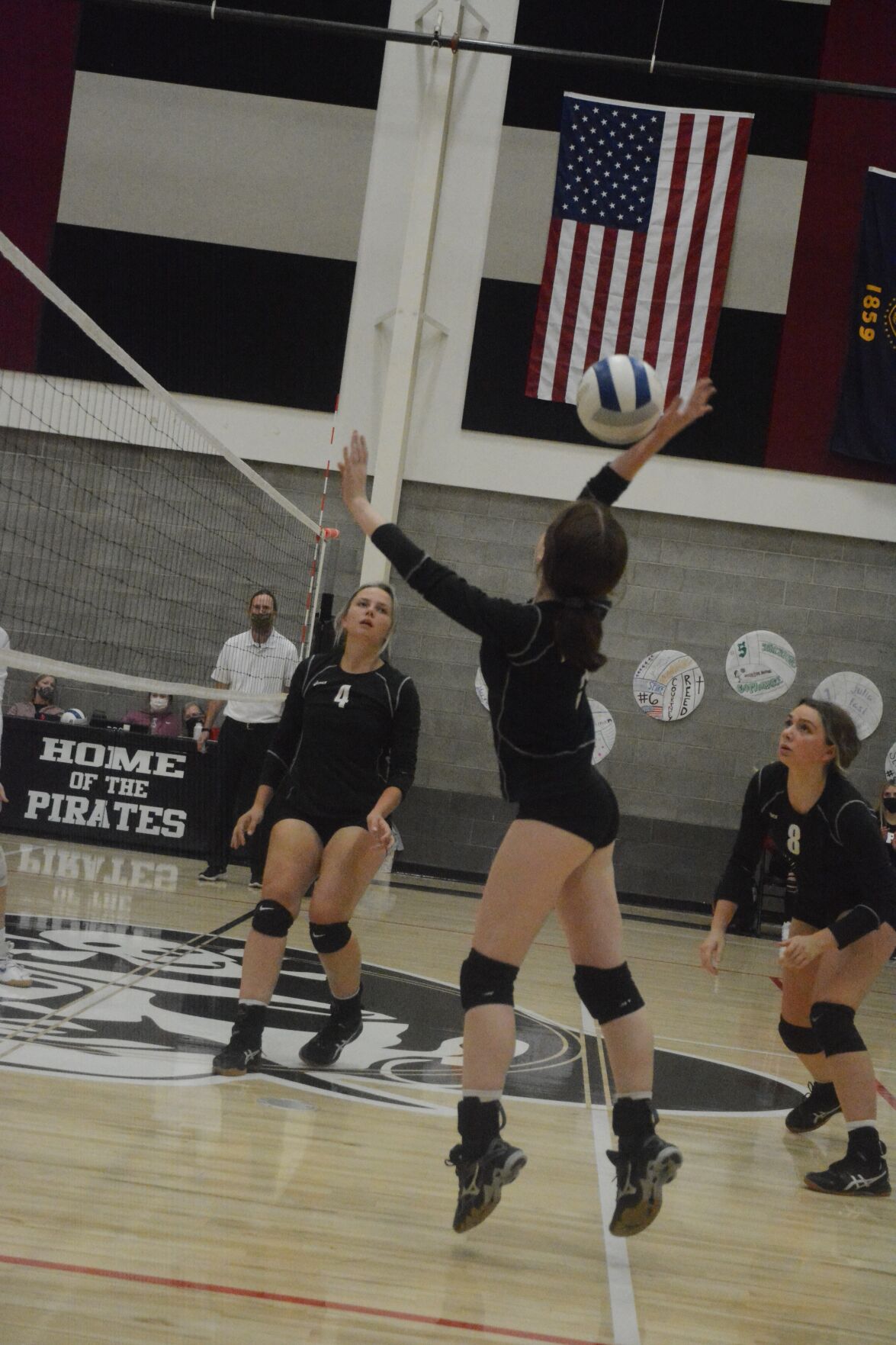 PERRYDALE — The Pirates had a goal going into the volleyball season. The way they’ve played, it’s clearly in reach.

“They want to go back to state,” coach Lottie Breeden said. “It’s a lot of fun. When you’re out of high school, you don’t talk about the wins and losses as much as the good memories, and going to the playoffs makes for really good memories and good times.”

The Pirates have been extremely busy of late. They played three matches in two days last week and opened a stretch of four matches in four days on Monday.

Through last week, they were 8-2 overall and 6-1 in the Casco League, good for second place behind 9-0 St. Paul and just ahead of 6-3 Willamette Valley Christian and 5-4 Jewell.

The Pirates beat Jewell and Willamette Valley Christian 3-1 on back-to-back days last week, so even their 3-0 loss to St. Paul (which snapped a six-match win streak) didn’t hurt them.

The top three finishers in league automatically qualify for the 24-team Class 1A playoffs. The Pirates were a postseason team in 2019, the last time volleyball teams had that opportunity.

Perrydale has five regular-season matches remaining, including a key one Wednesday night at Jewell.

“The season has been great,” Breeden said, pleased with the performances up and down the roster in her first year as head coach.

Perrydale started slowly against Jewell last week, dropping the first set at home 25-17 before winning 25-21, 25-18, 25-22. The Pirates had St. Paul already in the gym and on deck for their match later that night, and Breeden said her players probably had the Buckaroos on their minds a bit early.

“It was hard for us to focus on Jewell because we were so focused on St. Paul,” she said. “But once they got their heads straight and realized they had to play a match before St. Paul, they settled down and were able to play their game.”

Perrydale’s first lead in the second set wasn’t until 15-14, and Jewell was even with the Pirates at 20-20. Senior Heidi Juarez got an ace to give Perrydale a 22-20 lead, freshman Kali Clement got a block and an ace to make the score 24-21, and Jewell made an attack error that ended the set.

Juarez and junior Cora Gleason did most of the setting for the offense.

“Everyone competed and battled it out,” Breeden said,

The Mountaineers broke into the win column on Thursday, downing C.S. Lewis Academy 3-1 at Falls City.

“It was so exciting,” coach Janell Davis said. “A great game.”

The Mountaineers had lost their first nine matches this season.

“The athletes showed up with great energy and ready to play,” Davis said of Thursday’s victory, which came one night after a 3-0 loss at Jewell. “They really applied the previous night’s practice skills and executed beautifully, like tracking and moving with the ball. We ran a new offense and defense to strategically place players to our advantage.

“The team did great with their serves. We had more kills than any other game, and kills from people who normally don’t get any. Our setters (Cora Watkin and Ariel Cooper) had a lot of great net play.”

Watkin, a junior, said the victory felt “amazing” and the difference was “our mindset — we wanted the ball, and to win.”

Cooper, a freshman, said the team’s “communication, attitude and mirroring (tracking) the ball” was pivotal.

The Dragons swept Lebanon and North Salem last week, raising its record to 10-6 overall and 6-3 in the Mid-Willamette Conference. The Dragons were fourth in the league as of last week, three games ahead of North Salem, South Albany and Central. The top four finishers automatically earn berths into the 16-team Class 5A playoffs.

Dallas coach Kayce Lilley was “really happy” after the North Salem match. “We have been working on speeding up our offense, and that made a difference for us,” she said. “Our serve receive passing was consistent, so we were able to run a faster tempo, and our hitters did a great job finding open court. We’re also doing a better job minimizing our unforced errors.”

Dallas began this week ranked ninth in 5A by the Oregon School Activities Association.

“We’re rolling into the second half of league with some confidence, and I’m excited to see how the next couple weeks go.”

Dallas plays Thursday at West Albany and Saturday in the Clearwater Classic at Bend.

The Panthers fell 3-1 to West Albany and Silverton last week, leaving the Panthers 5-10 for the season and 3-6 in the MWC.

Central won the first set against Silverton 25-21 and “played extremely well, but we were not able to maintain our excitement and focus,” coach Bruce Myers said.

The Panthers served well in the match, with senior Stella Lopez getting five of the team’s nine aces. Senior Katie Fraley had 11 kills, and freshman Hadley Craig hit a team-high .158 and got seven kills. Senior Kalia Baker led the Panthers in digs with 19. Fraley added 14, Lopez 11. Sophomore Ashley Barba had 28 of the team’s 29 assists.

Central will be at Corvallis on Thursday.

The Titans split two matches last week, bouncing back from a 3-1 loss at South Salem to win 3-0 at home over Mountain View. West Salem entered this week 11-4 overall and 5-4 (fourth) in the Mountain Valley Conference.

The Titans play host to Sprague on Thursday, then go to Bend for the Clearwater Classic on Saturday.