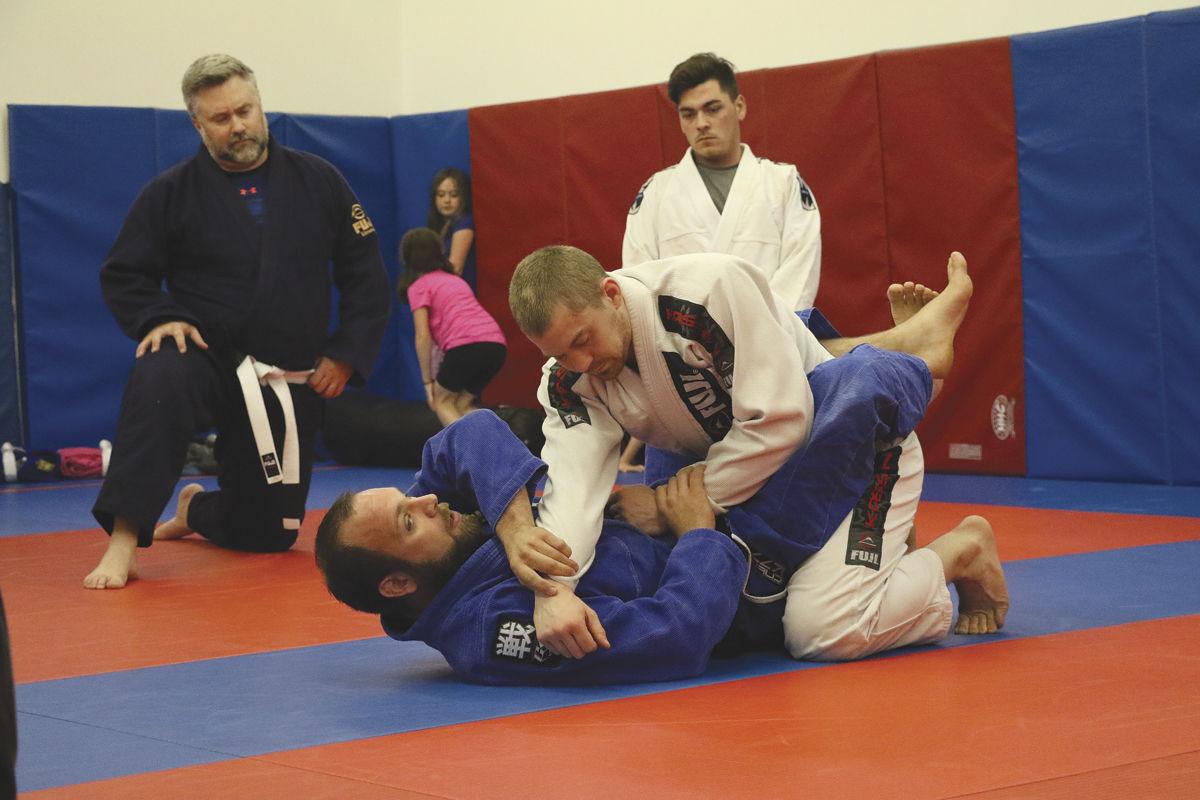 Daniel Priebe (blue) demonstrates a move during a class on April 13. 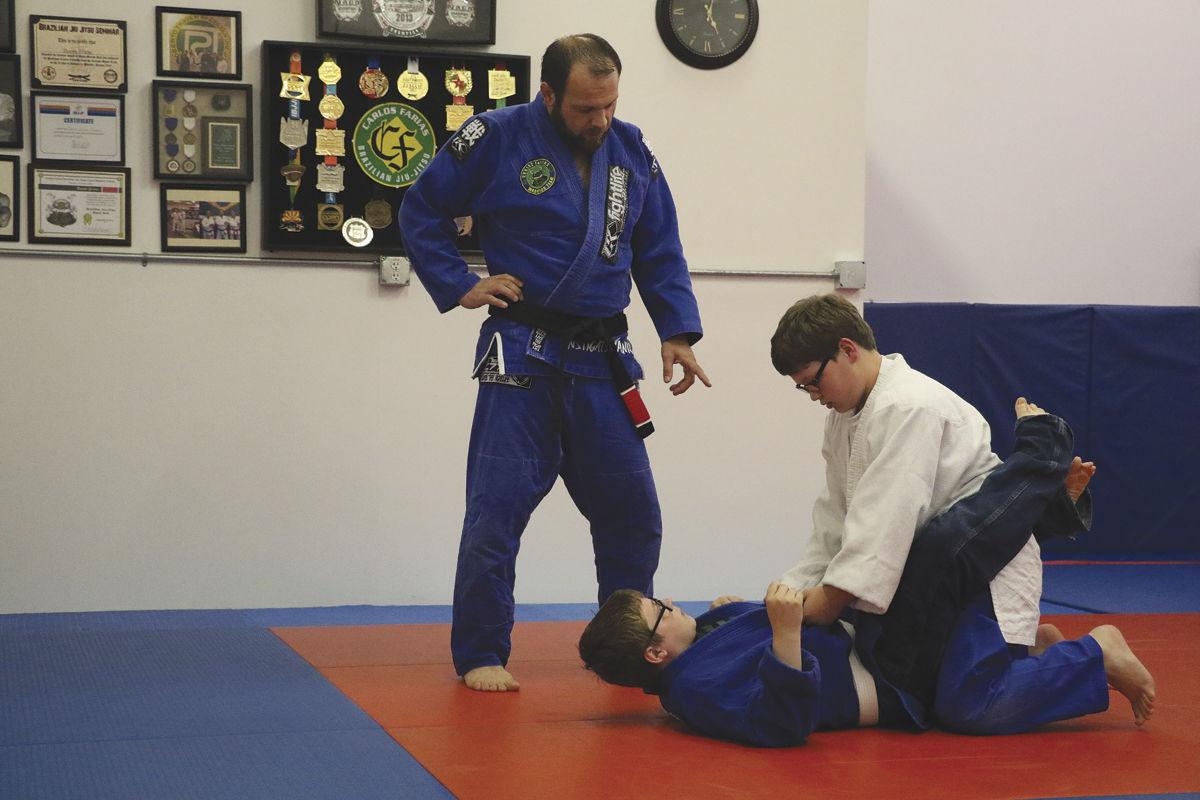 Daniel Priebe watches two of his students during a kids class on April 13.

Daniel Priebe (blue) demonstrates a move during a class on April 13.

Daniel Priebe watches two of his students during a kids class on April 13.

DALLAS — Daniel Priebe was living the life — or so he thought.

It wasn’t until Priebe, a former collegiate wrestler, discovered Brazilian Jiu Jitsu that he saw his life could have a greater purpose — one that he hopes to share with Polk County residents.

As a high school wrestler, Priebe was part of a squad that won state titles all four years. He attended Arizona State University to wrestle at the collegiate level, but an injury cut his career short in 2001.

He was still involved in the sport, becoming an assistant wrestling coach at a local high school, but it wasn’t the same as competing. Priebe sought to fill his newly found free time the way many college students do.

“I was working, going to school and partying,” Priebe said. “I didn’t really have anything to keep me out of trouble. I got a job and started getting lazy.”

On the surface, he was having a blast.

Below it, he hid a pain he wasn’t ready to deal with.

“It was rough,” Priebe said. “Part of why I got out of shape and was partying a lot was depression of not being able to do what I love.”

Years later, in 2008, a friend ran into Priebe and was shocked with Priebe’s physical shape.

“He told me, ‘hey man, you used to be a college wrestler. What happened?’” Priebe said.

That friend had recently begun training in Brazilian Jiu Jitsu, a martial art that focuses on grappling, and extended an invitation to Priebe.

“I’ll be honest, when he approached me, it probably took three or four months to convince me to do it,” Priebe said. “I was so set in my ways of being comfortable and being lazy.”

Eventually, he gave in — partly out of curiosity and partly to appease his friend.

Turns out Brazilian Jiu Jitsu was one of the best choices he ever made.

At first, Priebe was drawn to the similarities to wrestling, but success on the wrestling mat doesn’t mean an easy time in Jiu Jitsu.

“In wrestling, you always want to be on top,” Priebe said. “In Jiu Jitsu, that’s not always the case. You have to be very dangerous off of your back. I put myself on my back for a year and half straight just to start feeling comfortable being there.”

“It will make you uncomfortable, but it teaches you how to push past it and overcome,” Priebe said. “It teaches you how to deal with things, which translates into the rest of your life. You can see if I’m able to do this, I can do anything else I want to do.”

He earned his black belt and has competed and won multiple international competitions.

But what Priebe truly wanted was to teach.

“I have the passion to share this with others,” Priebe said. “I want to give people another route to have something to do, to give them focus and to work toward something and to stay out of trouble.”

Priebe, along with his wife, moved to Dallas in October of 2014.

He started holding classes with a few students.

“I was actually teaching out of my garage,” Priebe said. “I wasn’t sure of the market and wanted to see if there was an interest.”

It was then that Priebe thought his plans to open a Brazilian Jiu Jitsu school would be dashed before it had a chance to begin.

“Mike (Fleming) showed up in his swat car in his police uniform during one of my classes,” Priebe said. “He walked up to me and gave me this real mean stare down and said, ‘I have a complaint about you running a business without a business permit.’”

“He had me shaking a little until he told me, ‘I’m just kidding,’” Priebe said.

Fleming, a purple belt, wanted to train with Priebe.

It didn’t take long for Priebe’s classes to grow to the point where his garage was no longer big enough.

When the location on Mill Street was available, he pounced and officially opened Daniel Priebe Brazilian Jiu Jitsu earlier this month.

Kids and adult classes are offered Mondays through Fridays. A free one week trial is available.

Just be prepared for an experience unlike any other.

“One of those things people say is it’s for everyone,” Priebe said. “I don’t feel that way. It takes a special person. You are going to find frustrations. You are going to try to do something that’s not going to work, something that you can’t figure out. Jiu Jitsu mentally and physically builds you up and breaks you down. It’s really for people who have the ability to overcome their fear, overcome frustration and are willing to push through and work it out.”

For those who do enjoy it, Jiu Jitsu can do far more than teach combat skills. And that’s what Priebe hopes others see.

“If I wasn’t doing this, I’d probably be like a lot of my friends who go to work every day, come home, sit down and watch sports with a beer,” Priebe said. “Jiu Jitsu constantly makes me have to improve and gives me other goals to do other things in life. It’s changed my life.”