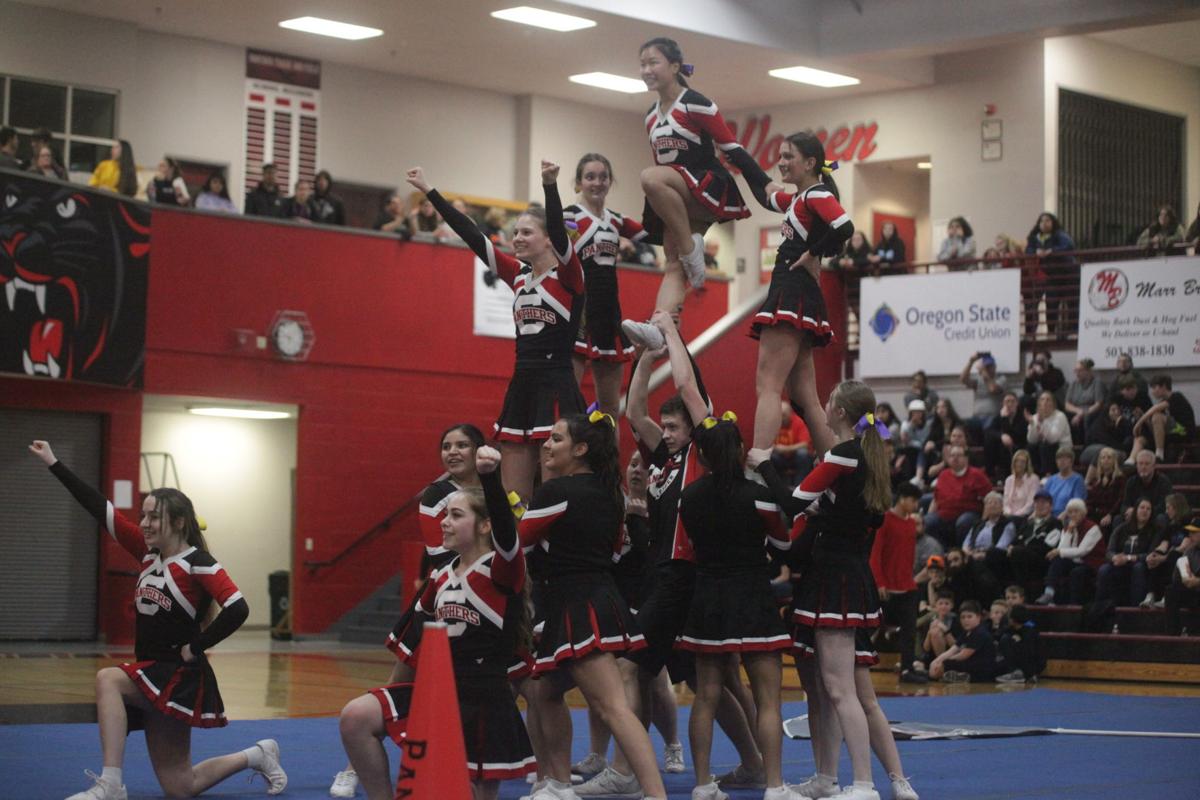 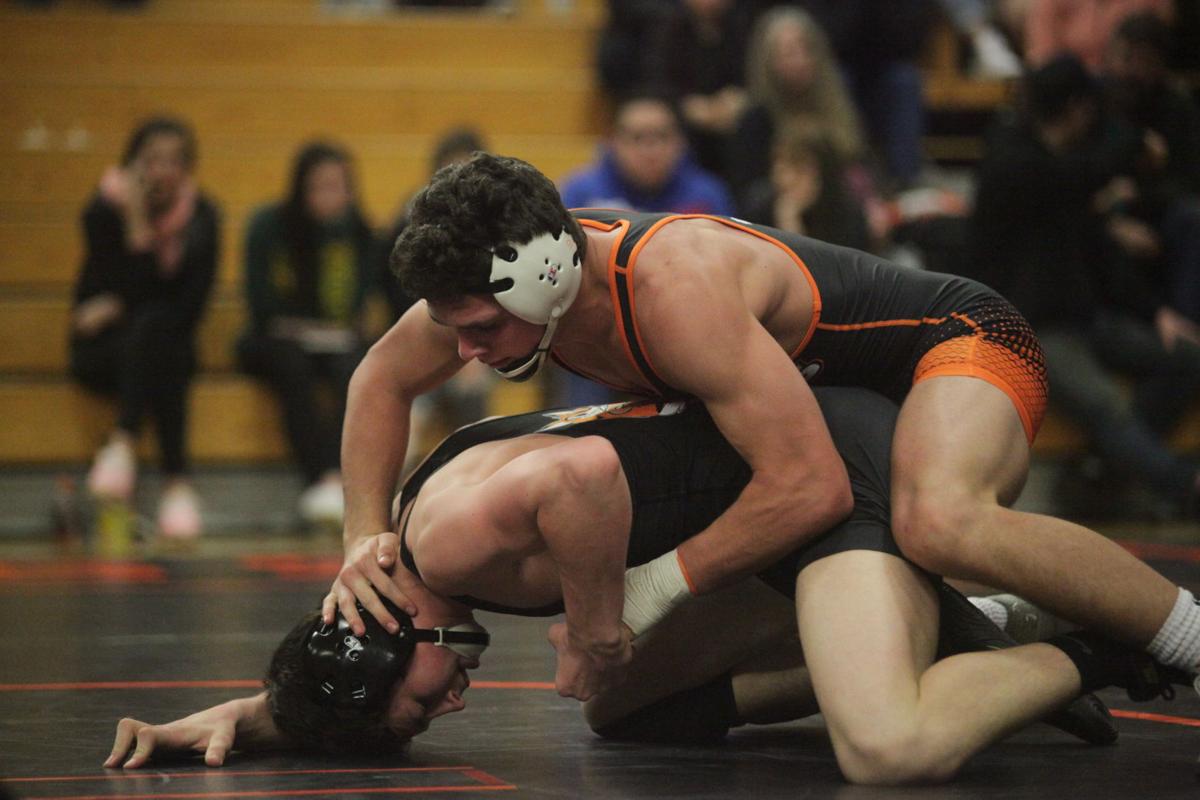 Senior Colson Spencer leaves it all on the mat during last Thursday’s dual meet at Silverton against the Foxes and the North Salem Vikings. 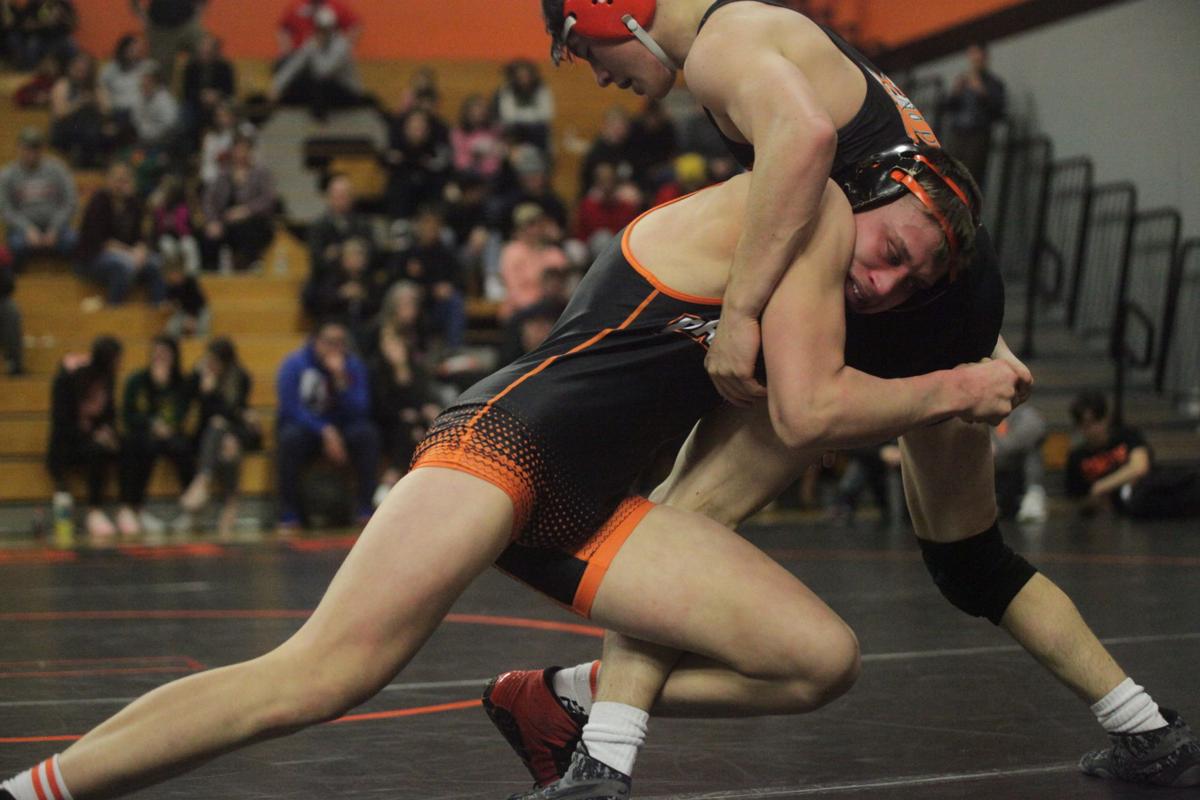 Junior Luke Hess competes during last Thursday’s dual meet at Silverton against the Foxes and the North Salem Vikings.

Senior Colson Spencer leaves it all on the mat during last Thursday’s dual meet at Silverton against the Foxes and the North Salem Vikings.

Junior Luke Hess competes during last Thursday’s dual meet at Silverton against the Foxes and the North Salem Vikings.

Swimming: The Panthers swim team competed at South Albany on Jan. 28 against the Dallas Dragons and South Albany Red Hawks.

The girls team tallied up 74 points for first place, and the boys team took last place, with 46 points.

The Panthers girls team got things started with a first-place finish for the 200-yard medley relay, with senior Dalia Robolledo-Hernandez, senior Olivia Cooper, senior Lynze Bradley and freshman Taylor Hagedorn swimming to a 2:21.37.

Sisters Olivia Cooper and Sarah Cooper, and Hagedorn and Bradley competed together in the 200-yard freestyle, finishing in first place in 2:01.75.

In the final relay of the day, the 400-yard medley relay, Bradley, Sarah Cooper, Robolledo-Hernandez and Madeline Altenburg made a strong showing to nab first place in 4:47.92.

On the boys side, senior Sean Stephenson took first place in the 100 freestyle, clocking in at 2:12.70.

For the 400 medley relay, Clayton Amerman, Nathanial Thompson, Moises Falcon and Stephenson swam competed to win first place in a time of 4:16.01.

The team traveled to Silverton on Tuesday after press time.

Swimming: After competing on Jan. 28 against South Albany and Central, the Dallas Dragons took last place for the girls side, with 15 points, and the boys took second with 47 points.

Wrestling: The Dragons competed in the Reser’s Tournament of Champions on Friday and Saturday, batlting against some of the toughest teams in the state. Senior Ashton Brecht, 285, came away with a second-place finish after two grueling days of wrestling. Senior Cooper Hise nabbed a fifth-place finish in the 195-pound bracket, and junior Cael Morrison picked up fourth place for 126.

The Dragons compete at Silverton on Saturday at 10 a.m.

For the girls team, freshman Loony Stork took first place in the 100-yard backstroke, clocking in at 1:08.05.

Sophomore David Beasley clinched gold in the 100 backstroke, with a time of 1:13.93.

The team traveled to Silverton after press time on Tuesday.

The team traveled to Willamette Valley Christian (5-14, 4-7 Casco) on Tuesday after press time.

Men’s Basketball: The Wolves edged out an explosive 111-78 victory at Concordia on Jan. 28, followed by 98-75 road win at Montana State University Billings.

The Wolves head to Seattle Pacific on Thursday; tipoff is 7:30 p.m.

Women’s Basketball: For its fifth loss in a row, the Wolves fell 68-59 at Simon Fraser on Thursday, followed by a 61-57 loss at Western Washington University.

The team hosted Concordia on Tuesday after press time.

Men’s and women’s track and field: Not only did junior Derek Holdsworth take gold in the men’s 800-meter race at the University of Washington indoor meet on Saturday, but he also set a new record for WOU, as well as for the Great Northwest Athletic Conference in a field of 40 runners. Additionally, he was the only Division II runner to finish in the top 10. He finished the race in 1:47.74.

Senior Justin Crosswhite nabbed a new personal record in the mile, placing 25th overall in a time of 4:07.30, and moving to a third-place spot in the WOU record books, behind David Ribich and Dustin Nading.

Junior Moana Gianotti was the second competitor at the meet to place in the top-10 in shot put for DII. She reached a throw of 44-09.00 to grab 10th place.

The Wolves travel to the University of Portland Feb. 8 and 9.

Women’s Softball: Over the weekend, the Wolves competed in the Desert Stinger classic in Las Vegas. The team started things off on Jan. 31 with a 11-1 loss against San Francisco State University, followed by a 5-1 victory that afternoon against Sonoma State. On Feb. 1, the Wolves clinched another win, this time against Colorado Christian, 10-7. That afternoon, they fell 14-0 to Oklahoma Christian.

For the team’s final game on Feb. 2, the Wolves lost 7-2 to California State, San Bernardino.

On Saturday, the Wolves host Eastern Oregon University for a doubleheader, starting at 11 a.m.