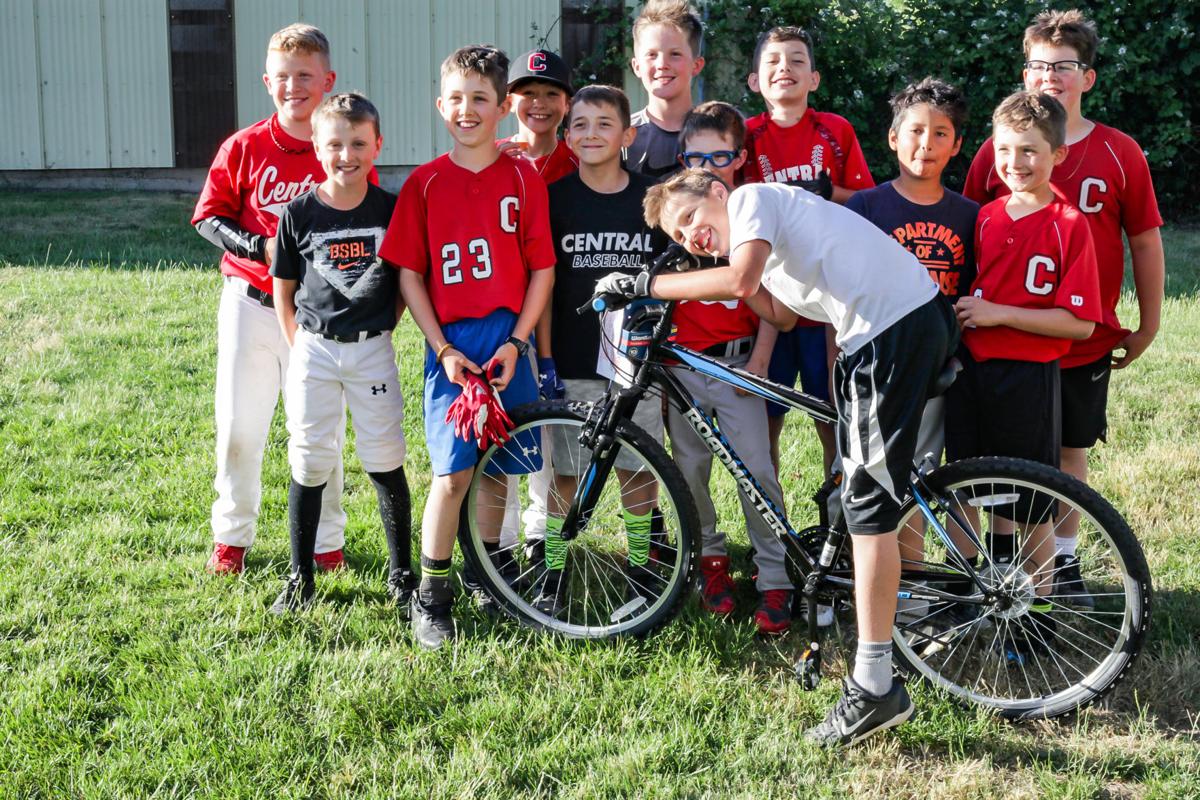 Asher Baker (far right) smiles as he receives his new bike from his friends on June 20. 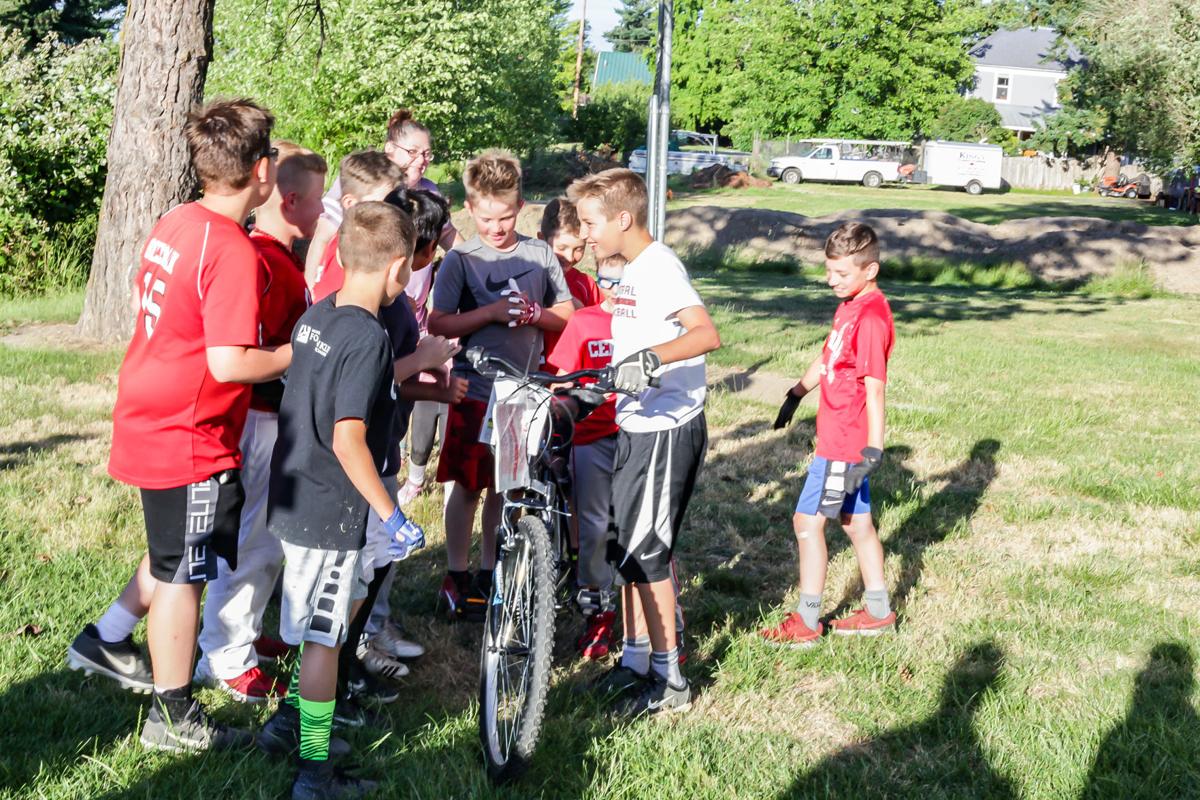 A Central Youth baseball team bought their teammate Asher Baker (center) a bike after his was stolen 13 days after his birthday.

In this case, it came in the form of a Central Youth Sports baseball team that came together to buy a new bike for a teammate, fifth-grader Asher Baker, after his was stolen.

Over the course of two days, $230 was raised by members of the baseball team through collecting cans around various Monmouth and Independence neighborhoods.

Asher’s bike was stolen off the front porch of the Baker home during the last week of school, on June 12, thirteen days after Asher’s birthday.

“He was really sad,” said Asher’s mom, Conny Baker. “He had been riding his bike to school in the morning and home, and so he went out to go ride his bike to school with his sister, and he’s like, where’s my bike? And we were looking around and it wasn’t anywhere.”

When Conny heard that Asher’s friends wanted to raise money for a new bike, she said her instinctive reaction was not to worry about it.

“But once I heard it was the brainchild of the boys, I was like, oh for sure, this is going to be amazing,” Conny said. “And I really think, not that I’m all for bikes getting stolen, but it turned into something even more beautiful than if it hadn’t happened. Because if this (fundraiser) wouldn’t have happened, the boys wouldn’t have got together; they made memories themselves. I know Asher and I, we were praying that the bike would come back or that someway there would be a silver lining that … something good would come out of this. We never found his bike. But this has happened and it’s been really amazing. And really cool for Asher. Makes me proud for all the boys.”

Brothers Easton and Sawyer Herbert, third- and fifth-graders on the team, spearheaded the project to buy Asher his new bike with help from their mom Connie Herbert.

“When we heard about it, one of my sons, Sawyer, came home from practice, and he felt so bad,” Connie said. “And then his brother Easton said, ‘oh we should do a fundraiser for him.’ And it transpired from there.

“Some people thought we could collect money from parents to help, and I was like, no, it’d be more fun for the kids to do something, so we were just like, well, cans is easy. So that’s how it transpired. We got a group of boys together, went around the neighborhood, filled the bike trailer up with cans. We did basically, five hours in one day, we collected. We returned cans the next day and that took a couple hours. The kids went around and said what happened and asked random neighbors.

Sawyer said he felt sad when he found out his friend’s bike had been stolen.

“Because it was just a brand new bike,” he said. “He got it for his birthday and he only had it a few days. I felt bad for him.”

Fifth-grader Jackson Barba agreed with Sawyer. “It’s hard when you just got a bike and then it gets taken away, because you’re so excited to do it and then you lose your opportunity.”

Fourth-grader Cooper Larson was excited to do this for Asher because he said everyone on the team is good friends with one another.

“We’ve all known each other a long time,” Cooper said.

The boys, who ranged between the third and fifth grades, wanted to keep their fundraising project a secret from Asher.

“He’ll definitely be surprised and happy, maybe even a little emotional,” said Barba.

“He’s probably just gonna be happy. He was also getting cans too and raising money,” said fifth-grader Logan Billman.

The team bought the bike on June 18 and presented Asher with it on June 19 after practice. The boys crowded around the bike and, as Asher came out of the batting cages, explained to him what they had done.

Asher looked taken aback, a big grin on his face.

“I was very, very surprised,” he said. “I felt really excited, and it was so thoughtful that my teammates thought of that for me, and really, I wish I could do something back for them. That was just amazing.”

Conny knew about the whole thing in advance.

“So I’ve known from the beginning but I’ve been staying out of the loop, so that I just didn’t know anything, so nothing would slip out,” she said.

The other boys who were a part of the campaign were Josiah Vela, fifth-grade, Josh Fitts, fifth grade, Tyler Olafsen, fourth grade and Emilo Leos, fifth grade.

After buying Asher’s new bike, there was still $135 left, which the team decided to use to buy helmets with and donate to the Independence Police Department for the kids who don’t have helmets.