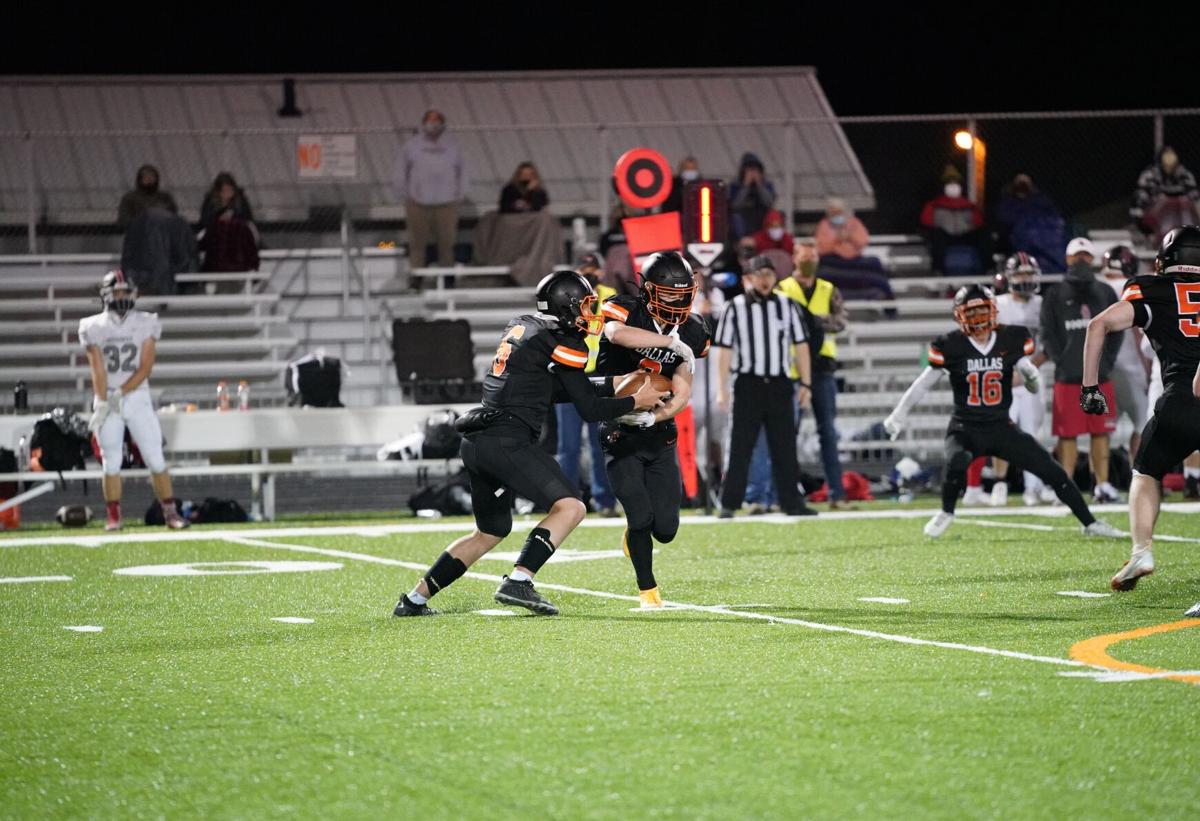 Quarterback Luke Hess fakes a hand off to Logan Person during the Dragons’ victory on Friday. 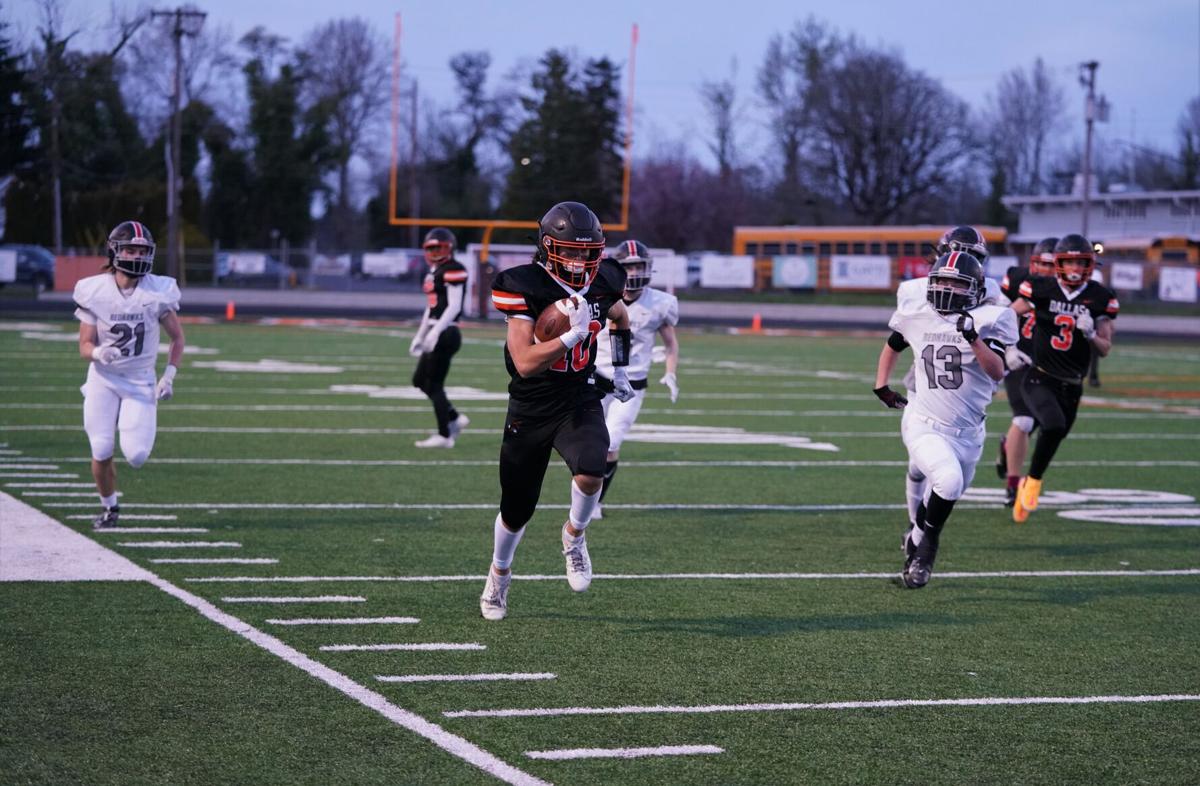 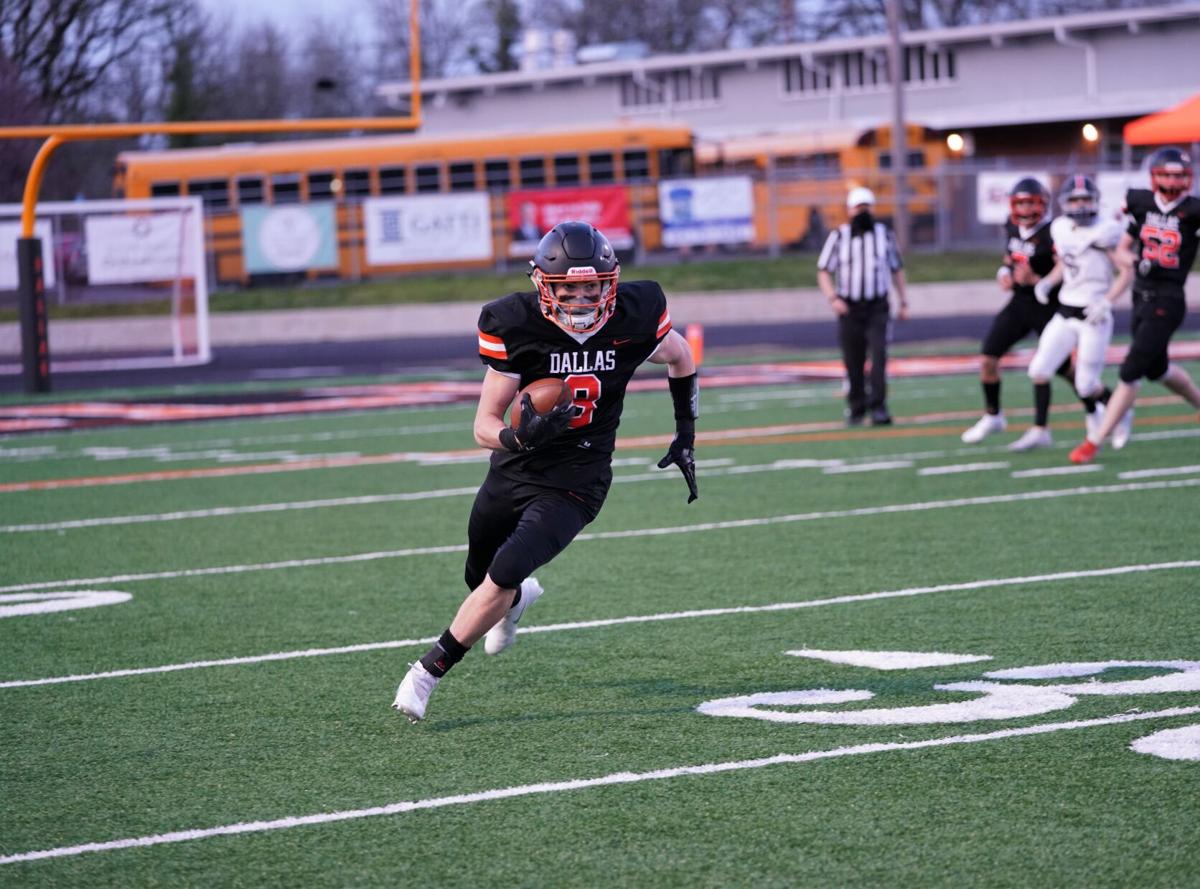 Quarterback Luke Hess fakes a hand off to Logan Person during the Dragons’ victory on Friday.

The Dragons scored four of their seven touchdowns in the first quarter and held the Redhawks scoreless until the closing seconds of the third quarter.

After the Dragons took over on downs shortly after the opening kickoff, a 75-yard pass play from Ashton Foster to John Hofenbredl provided the first six points. Logan Person kicked the extra point, as he was to do for the remaining TDs except for one followed by two extra points.

Soon after the kickoff, South Albany punted, and Person returned the ball to the Redhawk 46-yard line. Chase Brushe then ran the ball in for the second Dallas touchdown.

The Dragons soon got the ball back on downs. Hofenbredl ran 29 yards to the end zone, and Brushe ran in for two extra points.

Hofenbredl’s kickoff went into the end zone for the third time following a touchdown, and South Albany soon had to punt. An offside penalty against the Redhawks moved the ball to their 27, and Hofenbredl ran the ball in for the fourth TD of the period. Dallas had a 29-0 lead.

South Albany’s defense was tougher the rest of the way, and the Dragons were set back by several penalties, especially in the second quarter. Dallas, however stayed strong on defense. Late in the second period, Aiden Henrickson made a 28-yard run to the end zone.

The second half started with another Hofenbredl kickoff that became a touchback. South Albany soon punted, and in the middle of the third quarter, Foster made a 33-yard run for another Dragon touchdown. Just before the period ended, the Redhawks’ Tyler Seiber ran 46 yards for South Albany’s only TD. A kick for an extra point failed.

In the middle of the fourth quarter, Jace Grillo ran the ball in from the South Albany 3 for the final touchdown.

Coach Andy Jackson said his Dragons kept playing as if the Redhawks were a winning team.

“I’m proud of the group,” he said. “We always expect everybody we play to be good.

Because it was the last home game of the season, it was Senior Night for Dallas. Seniors honored, besides Grillo, Hofenbredl, Brushe, and Henrickson, were Cael Morrison, Luke Hess, Chauncey Saunders, Conner Nash, Kadin Thorsted, DaShawn Martin, and Colton Richardson.

Dallas’ cross-county rivalry game with the Central Panthers on Friday has been canceled. Instead, the Dragons will play at 5A Thurston (4-1, 3-0 Midwestern League) on Thursday at 7 p.m.