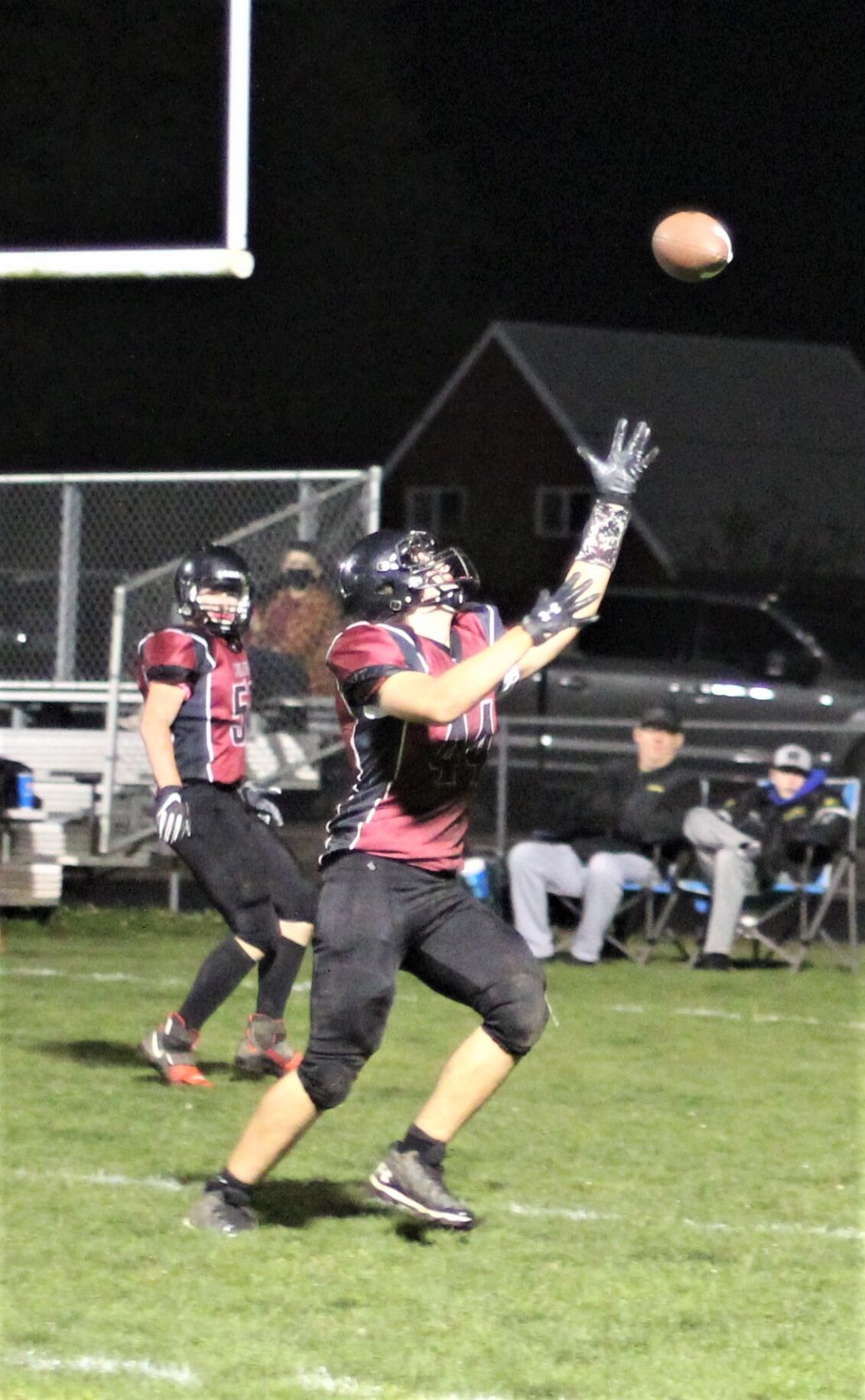 Perrydale’s Kaej Haynes catches a pass for a successful two-point conversion early in the high-scoring game against Waldport. 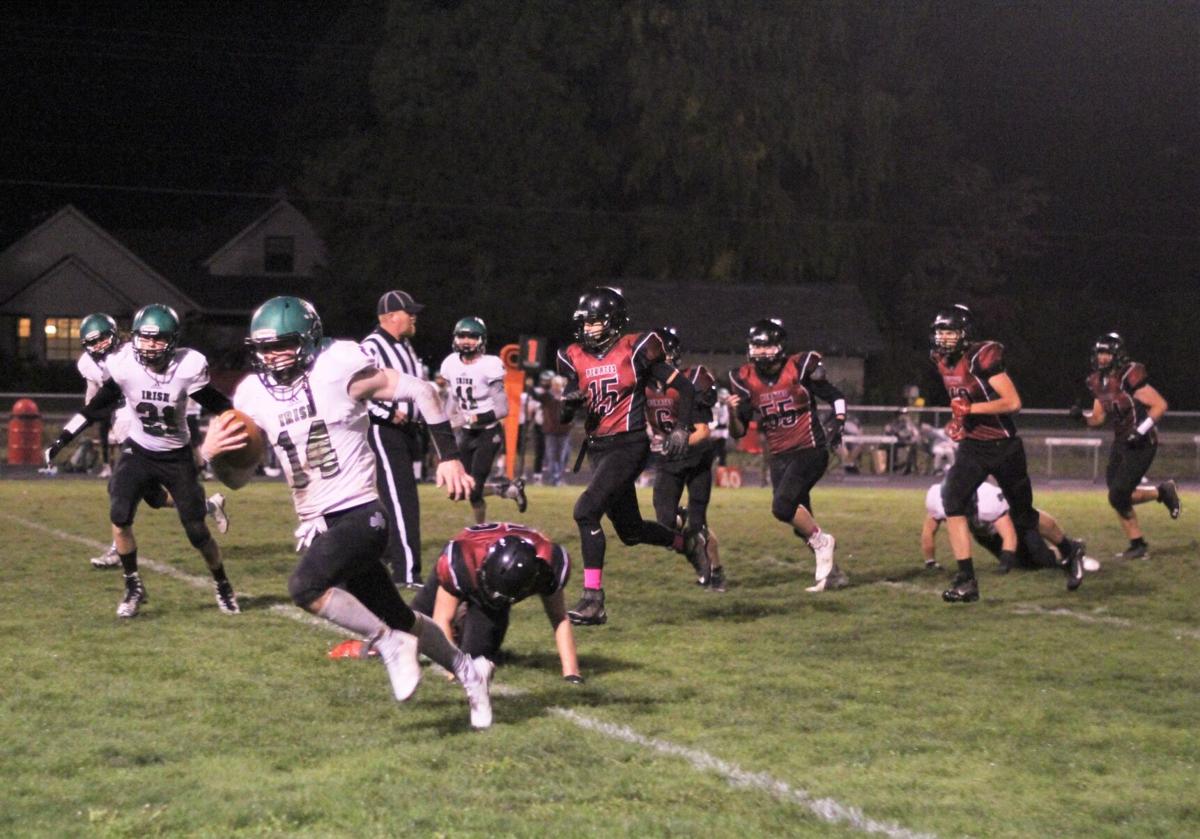 Waldport quarterback Zak Holsey runs past the Pirates defense during Perrydale's loss to the Irish on Friday.

Perrydale’s Kaej Haynes catches a pass for a successful two-point conversion early in the high-scoring game against Waldport.

Waldport quarterback Zak Holsey runs past the Pirates defense during Perrydale's loss to the Irish on Friday.

PERRYDALE — It’s 8-man football, but it was more like one against eight Friday night at Perrydale.

And the one won.

Waldport quarterback Zak Holsey was almost a one-man show as he led the Irish to a 90-54 league victory.

“We had no answer for him,” Perrydale coach Steve Mabry said.

For the game, he had 12 carries for 435 yards – 36.3 per attempt. Oh, and he also ran for seven two-point conversions, including seven in a row from the second quarter on, after Waldport apparently decided, what the heck, just snap the ball to him and let him go.

The Irish scored quickly and they scored often. Their touchdown drives averaged 64.2 yards in 34.2 seconds. They had five one-play touchdown drives, two that took two plays, and one each that lasted four, five and six plays.

Their 12 total touchdowns included a 69-yard kickoff return and a 65-yard interception runback. A 5-9, 165-pound senior, Holsey had too much speed for the Pirates, especially combined with some shifty running skills that made him slippery to bring down.

“When someone is fast and athletic, he can dominate the game,” Mabry said. “Over my years of coaching, there’s been times when there was just nothing you can do to stop a guy.”

Perrydale had its moments defensively – and its offense was good to very good to very, very good. The 54 points was a season high for the Pirates.

Finn Janesofsky ran 30 times for 191 yards and a touchdown. Kaej Haynes chipped in eight carries for 51 yards and, in another strong all-around performance, caught three touchdown passes and had nine receptions, ran and caught a pass for two two-point conversions, made tackles and recovered an onside kick.

Janesofsky, Haynes and Wyatt Cruickshank were honored before the game during Perrydale’s Senior Night festivities at the Homecoming game.

Junior quarterback Wyatt Burg completed 13 of 19 passes for 193 yards and four touchdowns, one to sophomore Erik Danka. Burg also ran for a touchdown. It was a pinball game from the start, and for both teams, who lit up the scoreboard. Perrydale answered Waldport touchdowns twice to lead 16-12.

The Irish scored one more time in the first quarter to go ahead 18-16. Janesofsky’s 10-yard touchdown run in the second quarter cut Waldport’s lead to 26-24. “We were trading blows like heavyweight fighters,” Mabry said.

But then the Irish ripped off 24 consecutive points to go on top 50-24. That would be too much separation for Perrydale, especially with a turn of events in the closing moments.

The Pirates were within 50-30 and drove to the Irish 5. But they got stuffed on a couple of runs, and then Burg’s fourth-down throw was picked off at the goal line. Waldport took over at its 4 with 52 seconds remaining in the half. The center hiked the ball to Holsey – who else? – and he went 96 yards in 14 seconds, and it was Waldport 58, Perrydale 30 at the half.

“That was a big turnaround,” Mabry said. “If we score, we could have cut the lead to 12 points.”

The Pirates did their thing offensively after halftime – they put together two nice scoring drives (11 plays, 66 yards, consuming 5:25, and then nine plays, 53 yards in 5:22).

“We tried to re-establish what we needed to do,” Mabry said.

But Waldport wouldn’t let the Pirates close the gap, and the margin brought on a running clock for the final 10:54.

The 144 combined points might have been who knows how many without the running clock. “That was fast-break football,” Mabry said.

Waldport is fourth in the Oregon School Activities Association Class 1A rankings.

The loss made Perrydale’s path to the 1A playoffs a lot more difficult. The Pirates (4-2 overall) dropped to 2-1 in the Special District 1 North Division, where they trail St. Paul (2-0) and are just ahead of Waldport (1-1) and Mohawk (1-1).

Perrydale has to play at St. Paul on Friday night, and the Buckaroos are as tough as their No. 3 state ranking would indicate.

They’re averaging 56.7 points per game and allowing 20.6. Perrydale, ranked ninth in 1A, then winds up its regular season with a neutral-site game on Oct. 28 against Gold Beach (at Waldport).

Gold Beach is 13th-ranked and 4-2 overall. One win probably would give Perrydale a ranking high enough to be one of the 16 teams in the playoffs. It’s possible, given the strength of their final two opponents, that even without a win the Pirates might advance.

Jim Polzin: Packers positioned for regular-season success after grinding out a victory over the Rams